The most serious problem currently facing charity is the lack of trust. In order for charities to obtain continuous support, they need to make their information more open and transparent. Another problem is the lack of corresponding supervision and audit of the internal management of charities, and at the same time, they are plagued by problems such as cost difficulties and the integrity of charitable organizations. But with the continuous development of blockchain-based detrust technology, it will bring new opportunities for charity. The immutability of the blockchain will help improve the credibility of charitable organizations, reduce the corresponding supervision and audit costs, and make the development of charities more complete.

On September 4, 2017, the Ministry of Civil Affairs launched the Charity China website, which is a national charity information disclosure platform, marking the further transparency of charity data. According to data from China Charity, the data recorded for charity trusts in 2019 increased by 578.95% compared to the data recorded for 2017, and the scale of trust funds increased by 234.88%. According to data released by the Ministry of Civil Affairs, there were 12,000 regular social donation stations, points and charity supermarkets across the country in 2018. 10.72 million people across the country provided 23.878 million hours of volunteer services in the field of civil affairs.

In 2018, the donation income of social organizations across the country reached 91.97 billion yuan, an increase of 26.1% over the previous year. The direct acceptance of donations by government departments has shown a drastic downward trend. In 2017, the civil administration system directly received donations of 2.5 billion yuan from all walks of life, but it was not disclosed in 2018, indicating that government departments have delegated more power to social donations to social organizations. 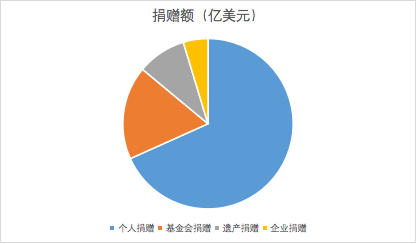 In 2018, China's GDP was 90.0309 trillion yuan, and charitable donations were 91.97 billion yuan, accounting for only 0.1% of GDP. Compared with the United States, charitable donations accounted for 2.1% of GDP, a difference of 21 times. If the United States is a model for a mature country with philanthropy, the development of philanthropy in China still has a long way to go.

There is still a huge blue ocean market for charity and public welfare. At present, China's overall development is still in its infancy. It still has various pain points, but these are just problems that need to be solved during its development. As a means, what kind of scenarios and development will the blockchain technology bring to charity? It is still in the exploration stage, but it is undeniable that the combination of the two will further accelerate the common development of the two. .