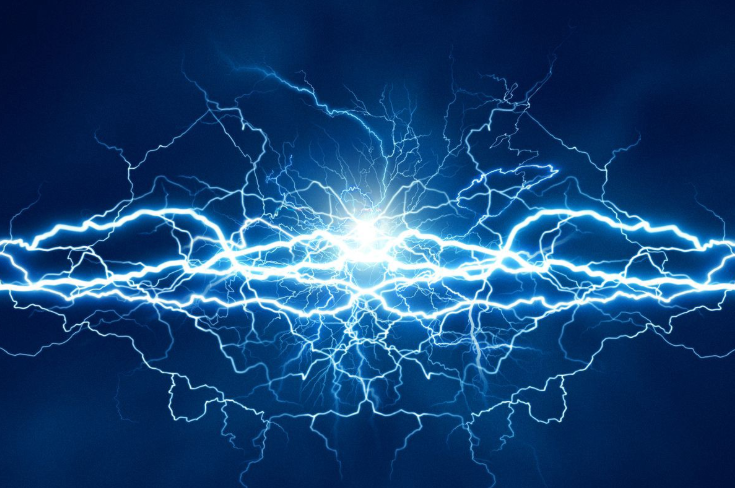 · Energy, raw joules alone, can be used to assess the fair value of Bitcoin

Bitcoin's price means a return to its energy value

· The energy value model states that if all miners stop mining Bitcoin tomorrow, the power input will be zero and Bitcoin will be worthless

The energy value formula states that the fair value of Bitcoin today (December 12, 2019) is approximately $ 11,500, which is 50% higher than the current transaction price.

In the article Bitcoin Production Cost, we observed the relationship between the price of Bitcoin and Bitcoin mining expenditures, and found that changes in Bitcoin production costs are mainly driven by the level of power input and the energy efficiency of mining hardware. Assume that many other factors remain the same.

This raises a question:

Can Bitcoin's basic value be measured with raw energy alone?

The fair value of Bitcoin is a constant function of energy input, supply growth rate, and the value of the energy fiat dollar.

These variables can be combined into the following equation, called the energy value (V) of Bitcoin:

· Supply growth rate (unit: s-1) = annual growth rate of circulating Bitcoin, which is inversely proportional to S2F (stock-to-flow). It is calculated as the annual change rate of Bitcoin (unit: year-1), and then converted to seconds.

Since the hash rate and supply rate of all units offset, this equation shows that the fair value (V) of Bitcoin can be expressed as a function of the Joule of energy consumed to produce it:

Creating the energy value of Bitcoin

To test the theory, all input data except mining energy efficiency comes from Blockchain.info.

The most challenging part is the correct estimation of Bitcoin's energy efficiency over time.

The energy required for Bitcoin mining is driven by two parts, namely the hash rate of the SHA-256 algorithm and the energy efficiency of the mining hardware itself. In the early days, Bitcoin mining relied on very inefficient CPUs and GPUs.

The energy efficiency of current ASICs is more than 100,000 times higher than the average Bitcoin mining hardware in 2009. This means that today, a relatively high portion of the average electricity bill for miners has been effectively converted to hash electricity.

To assess the historical overview of the energy efficiency of Bitcoin mining hardware, I have compiled the efficiency of 150 Bitcoin hardware models from Cambridge (ASIC only), Bitcoin Wikipedia (FPGA) and Bitcoin.it (ASIC, CPU and GPU) . All ASICs, FPGAs, and Intel, AMD, and Nvidia hardware providing energy efficiency (J / GH) were considered, and the release date of the hardware to be evaluated was found. Group common models and calculate the average energy efficiency of the models based on equal weights.

Then, calculate the daily energy efficiency of the Bitcoin network as an equal-weighted average of all hardware, which is within 2 years of CPU / GPU / FPGA release and 1.5 years of ASIC release. The reason for choosing a depreciation period is because:

Bitcoin mining is usually not competitive in the early days

· Other studies have also shown that in recent years, the depreciation period for ASICs has typically been 1.5 years

Finally, the average value of the energy efficiency transfer for one month is calculated, and the model types are phased out gradually.

In fact, some hardware models have a wider range of use and longer life. However, at the risk of increasing historical errors in the energy value model in an attempt to obtain unbiased results, no other hardware exclusion logic, data cleaning or data processing was performed. 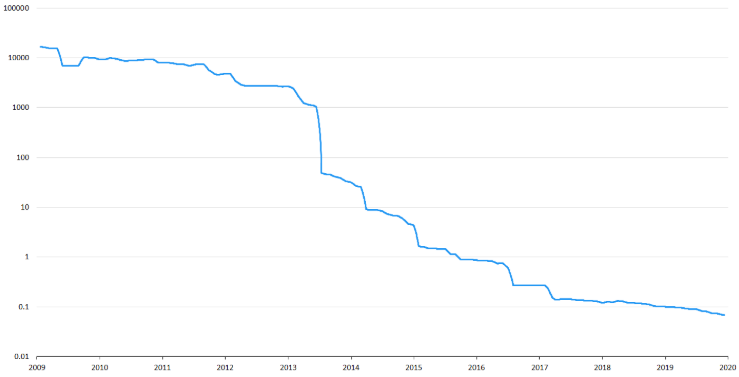 The S curve of Bitcoin's improved energy efficiency (indicating that J / GH decreases over time). Please note that since the introduction of ASICs from 2013 to 2014, efficiency has increased dramatically .

The fiat coefficient is a necessary constant to convert energy input units (joules) into fiat dollars. It just means how much we value energy.

According to the above energy efficiency curve, the fiat currency coefficient obtained is:

The drawing results show that, visually, the energy value of Bitcoin is very close to historical prices.

From 2013 to 2014, due to the transformation of GPU / FPGA to ASIC hardware, the energy value of Bitcoin plummeted. Although there may be a significant decline during this period, it may be somewhat exaggerated here due to the hardware usage and depreciation model assumptions described above.

Market power-bridging the relationship between supply and demand

The first question is, is Bitcoin's energy value logical?

In the article "Modeling the Value of Bitcoin with Scarcity", Plan B found a close relationship between market prices and the scarcity of hard assets such as Bitcoin. We can therefore assume that this represents the basic relationship of human "demand" for long-term value-preserving hard assets.

But there is a problem here.

Not all scarce assets have or maintain broad market value. For example, about 3,000 cryptocurrencies have a market value of less than $ 500. Many coins have a “restricted” supply model, but the market believes they have no fundamental value. They are scarce but not valuable. Bad art (a private museum in the U.S. collects and displays the world's ugly and strange art), bananas stuck to the wall (a banana that was once stuck on the wall sold for $ 120,000), and The same is true of many other rare one-time assets. This makes sense because the market value of rare assets that are easily available or easy to replicate are low.

When all energy (energy) is devoted to a task, energy suppliers (workers) expect that their efforts will generate demand. When suppliers see a growing demand for the fruits of their labor, they work harder to achieve greater returns. Others may also contribute for some rewards. However, if demand for a supplier's labor force declines, or the opportunity drops to a point where other tasks can yield higher returns, the supplier may stop investing in that task.

This can both explain the dispute over Bitcoin's computing power and serve as an argument for the value of Bitcoin's energy.

Continuous energy input represents a balance between supply and demand. Rising market prices encourage increased energy input through increased computing power and technological improvements, thereby improving energy efficiency. As a result, a sharp rise in market prices usually results in long-term growth in committed energy, which increases the energy value of Bitcoin. However, when speculative actions lead to skyrocketing prices without a corresponding increase in energy input, prices will historically plummet back to energy values.

This is the mean regression phenomenon. As expected from any fundamental value-driven intrinsic value estimate.

Bitcoin's price and energy value are close to each other, just like magnets. Although there may be deviations between the two, and indeed there are deviations, they are always closed. Although the value of energy is mathematically irrelevant to Bitcoin's transaction price and transaction volume, it is interconnected through the "invisible hand" on the market.

Energy value is based on supply-to-flow and energy input to capture long-term demand for rare assets and represents a symbiotic relationship between supply and demand for bitcoin.

According to daily data from January 2010, R2 of the "energy value" formula is equal to 80% of the actual Bitcoin price (the higher R2, the more realistic the model is). In contrast, the S2F model has an R2 of 88% under the same data. Although it is 8% lower than S2F, the following points need to be considered:

In summary, 80% of R2 is considered a favorable result of energy value. As can be seen from the above figure, the inflection point and huge gap between Bitcoin price and fair value can indicate a good time for buying and selling Bitcoin.

The energy value formula states that the current fair value of Bitcoin (December 12, 2019) is approximately $ 11,500, which is 50% higher than the current transaction price.

This shows that Bitcoin has a high risk reward in early December 2019. The following energy value oscillation chart also shows a positive outlook.

However, energy input may decline at any time.

This graph represents price as a percentage of energy value. The trend in 2019 looks very similar to the previous signs of a bull market.

By considering the growth of energy and supply, we find that there is an intrinsic link between the price of Bitcoin and its value.

Bitcoin's value is a function of its energy input (in Joules).

Here are some implications of the "energy value" formula:

Significant improvements in hashing technology (such as the introduction of ASIC) have caused considerable fluctuations in the short-term value of Bitcoin, which is due to a significant increase in energy efficiency, rather than relying on the growth of computing power.

· If quantum computing (or other major technological advances) solves the SHA-256 algorithm with less energy on the network, the intrinsic value of Bitcoin represented by the energy value formula will fall.

· Changing the bitcoin code to increase the supply growth rate of bitcoin will reduce the basic value of each currency in circulation.

If Bitcoin is still hashed in 2140, its supply growth rate will be zero. The energy value formula is like the S2F model, which can predict the infinite value of Bitcoin at that time (in US dollars). However, unlike S2F, it depends on the standards of the mining operation being performed at the time.

If Bitcoin succeeds on the throne of wealth storage and / or global currency, financial markets may have evidence that there is an intrinsic connection between value and effort (the energy expended in work).

Human time is limited because it is our most precious resource. We choose to invest our energy and time in all kinds of things. This is our most valuable choice.

Staking Economy: A new business model that is like a broken bamboo