Ten years ago, the first bitcoin transaction was born. In this short period of 10 years, the cryptocurrency industry has developed rapidly, and some new crypto assets have emerged, which has also gained a lot of supporters.

DataLight, a data analytics company, has made a video that tracks the changes in market capitalization of various cryptocurrencies since 2013.

From this less than two-minute video, we can see the changes in the cryptocurrency experience over the past six years, and perhaps get some inspiration from it. Here are some of the highlights in the video (watching this video requires a scientific internet connection, interested here ):

The market value of cryptocurrency continues to grow

The first and most important point is that from the rapid changes in the above chart, we have seen the continued growth of the cryptocurrency market capitalization. Starting with $1.5 billion in 2013, the total market value of crypto assets has grown substantially over the next few years. In November 2013, it set the first peak of $16 billion, and then the bear market in December 2017 brought us an all-time high of nearly $800 billion.

In the process of increasing total market capitalization, there are more and more types of cryptocurrencies. Although not all cryptocurrencies have practical applications, this also means that this market is free. What currencies will we see will prosper in the future? The market will tell you the answer.

The following is a comparison of cryptocurrency market capitalizations for 2013 and 2019 (taken from this video):

Another obvious feature of this competition is the huge advantage of Bitcoin compared to the competition. As can be seen from the video, overall, the market value of Bitcoin has actually decreased since 2013 and reached its lowest point in January 2018.

The competition between Ripco and the other two mainstream competitors, Litecoin and Ethereum, is another interesting point. From 2013 to 2017, the ranking of Ripple has climbed all the way. In 2017, it gained a lot of popularity and wide recognition, and the price climbed from $0.0065 to $1.98.

Since the official launch of Ethereum in 2016, its contest with Ripple has been one-sided, but in 2017 and 2018, Ripple has surpassed Ethereum several times in market value. At the beginning of this year, after Ethereum experienced a sharp decline at the end of 2018, the market value was once again surpassed by Ripple.

I believe that after six years, the market value of encrypted assets will be completely different. We will not know if there will be a new currency in the top ten in the future, but we can be sure that Bitcoin will always be in the first place. 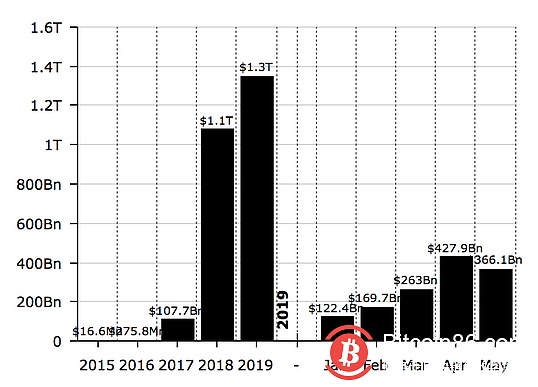