Editor's note: The original title was "Exclusive Networkwide | Filecoin's" 1475 "in the Beta

Filecoin, after Bitcoin and Ethereum, is the first blockchain project in the region that is closely integrated with the real economy, and has been favored by many blockchain fans.

It not only created a myth of fundraising of 257 million US dollars in 2017, but also looked at the entire technology community, and was also recognized by industry insiders as the ace benchmark for decentralized storage.

If what is the hottest event in the blockchain technology circle in December 2019, it must be the Filecoin test online on December 12th (Singapore time).

Although Filecoin's public beta is less than ten days ago, there are exciting competitions around the test version of the Lotus version of the test network, one after another.

During this period, many hot words were repeatedly mentioned: "first", "rushing the list", "attack", "forking".

There is also an interesting miner code-"1475".

At 1:55 am on December 12, Singapore time, the Filecoin testnet officially started. Many miners fought overnight. Most team members joined the fierce race. About 5 hours later, the first unofficial node t01081 Appeared on the list, not long after, node t01116 later took the lead, surpassing the official "pre-mined" node, and rushed to the first place in the computing power list. The first title of node t01116 spreads wildly, and the mood of the community is instantly ignited. Even the competitors are lamenting: too soon!

The transmission of emotions also has a butterfly effect. It quickly ferments in the community and strongly stimulates the adrenal hormones of all nodes and community members.

Even more, blatantly touting the business.

"Swipe the rankings and the number you want to brush!"

The first has become the sole goal of more unreached manufacturers to respond to the market. It seems that only by reaching the top of the list can they prove their technical strength.

Soon, the IPFS Chinese community posted a paper saying "the t01116 and t01081 node teams are very well prepared for testing the online line, and analysts believe that they use hundreds of devices to participate in the test." 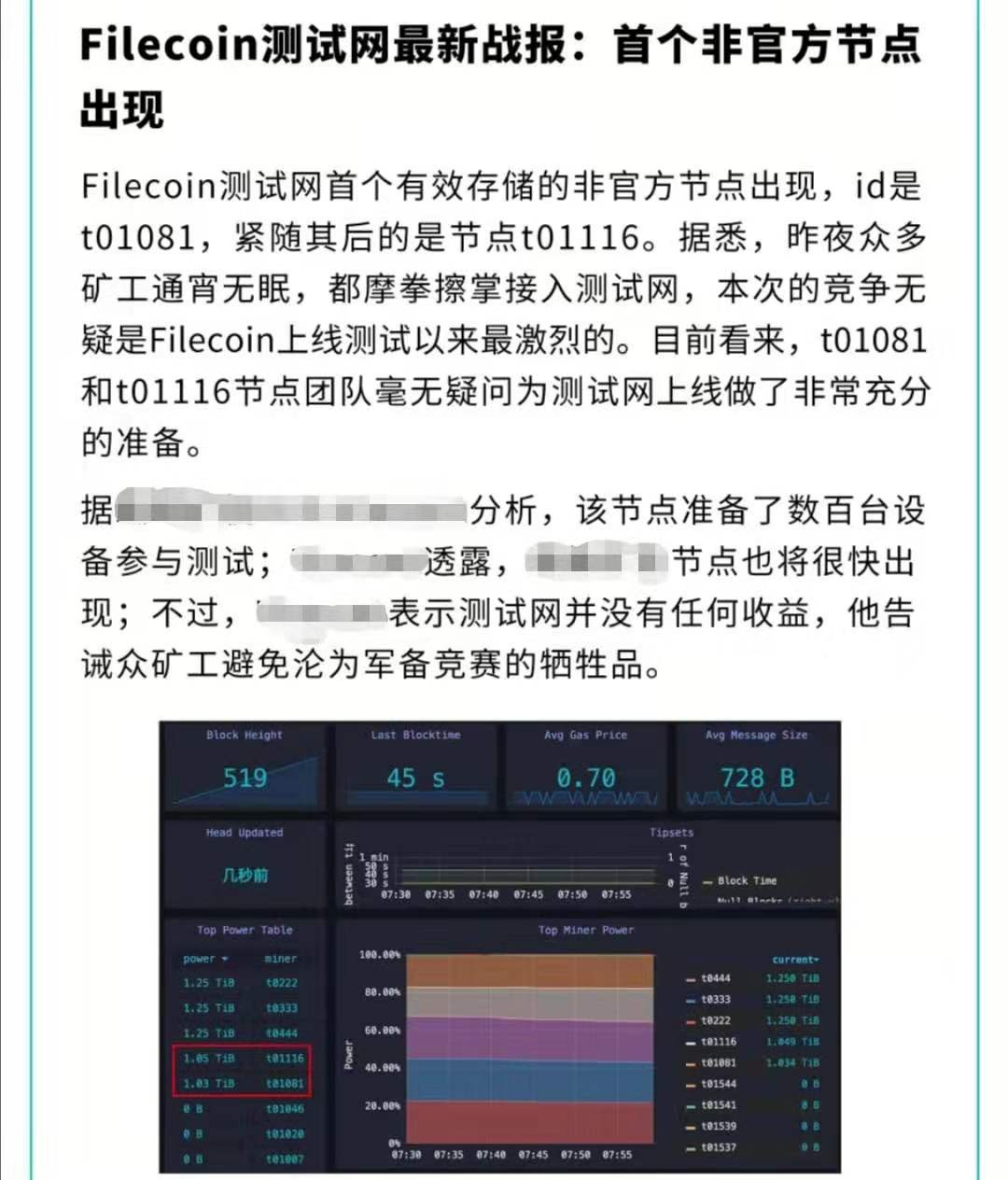 Immediately after, named "800,000 Machines? 50 machines running together? Who caused the test scam on Filecoin's mainnet testnet? "The article is spreading wildly. The core idea is that manufacturers use cluster mining to send nodes to the top of the list, which is costly.

For the first time, the community has been in controversy. Is it the number one or the list?

Go their own ways.

Give up to each other.

At 21:45 on the evening of the 12th, Why, the official head of Filecoin's technology, suddenly posted a "looking for someone" on Slack:

Why also humorously stated that for miners such as t01475 who found important bugs, he was willing to use T-shirts or other things as a reward. It turns out that node t01475 found a bug in the test network during the test run. This bug may be used to greatly increase the block generation rate. Attempting to verify this judgment quickly appeared on the top of the Block Won list. This anomaly caught Why's attention. He discovered that this was indeed an important bug, so he publicly offered a "reward" for t01475 miners.

However, t01475 did not claim the node publicly on Slack, but only contacted Why in private, and agreed with him a "offensive and defensive battle" to test the stability of the test network.

Therefore, t01475 verified the other two potential opportunities to increase the block explosion in the same way, and both achieved a large block yield.

On the 15th, Why told t01475 that he thought the other party must have done something right. T01475 asked Why to pay attention to time migration and combination attacks.

The next day, a screenshot of the chat between t01475 and Why was passed to the community. But this did not attract much attention, because the hot spots of the community at that time focused on the ranking of computing power, and few people talked about the block rate.

The turning point of the story appeared in the early morning of the 17th- cancel the hashrate.

In the early morning of the 17th, in order to avoid endless rankings of all nodes and use the rankings for publicity, Filecoin officially deleted the hashrate ranking.

"Find me so I can buy genuine products."

It is difficult to distinguish true and false in a short time, and benefit all beings.

Until the time of writing, no one publicly proves that he is the real t01475 through official forms.

Why is he reluctant to make it public?

Why did he avoid it deliberately?

The climax of the story happened on the 18th.

After that, the block could not be produced for half an hour, causing the entire network to be abnormal, and the Blocks Won section of the Lotus dashboard was empty. 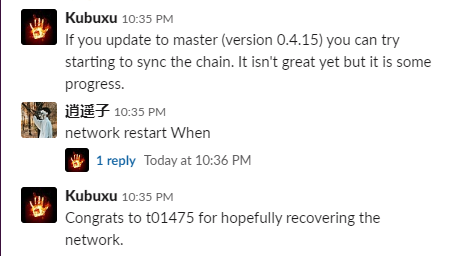 This triggered full discussion in the community. Was it a fairy fight or was it deliberate? Who is forking? Who launched the attack?

Not long after, node t01475 suddenly appeared on the block list first, and then the whole chain restarted to produce blocks and repacked the block information.

At around 20:30, the network returned to normal, and other nodes gradually reappeared on the block ranking list.

It is reported that on that day, multiple nodes tried to use the time transfer vulnerability to obtain a high block rate, but triggered the block explosion exception. T01475 discovered the problem at the first time, and created a fork to filter out the problematic messages, thereby maintaining The chain continues to run until the patch is officially submitted.

After the network is restored, the technical stream miners are looking for t01475, who is he?

Some people say that 1475 made a great contribution.

Some people say that he is a low-key technocrat.

Some people say that he is by far the biggest dark horse.

For a time, 1475 became synonymous with technology bulls.

The story does not end. On the 19th and 20th, problems occurred again during the test network operation and maintenance. 1475 assisted the official to successfully repair the network at two key moments.

At 22:35 on the 20th, the official core developers publicly congratulated t01475 on Slack for their contribution to restoring the network.

On the day of the test online, the official announced the time window of the main online:

In other words, there is still a full three months for the real mainnet to go online, and the real purpose of the testnet is to let nodes test mining and detect potential problems and stability of the network before the mainnet goes online. Withstand more attack tests, the mainnet's network security can only be truly beneficial after the mainnet goes live.

The original intention of the testnet was to "test".

So this problem is constantly encountered, and the problem-solving stage will be a normal one. In the course of operation and maintenance, any foreseeable and unforeseen story will happen.

This is the test field for node miners' technical strength, analysis ability, and strain rate, and it is also a competition field for each miner.

t01475's multiple shots have exacerbated the community's mood to want to know who he is?

But the real t01475 still doesn't want to report himself.

Keren, the official community leader of Filecoin, replaced "1475" with a "confession" in the Chinese community.

1475 just wanted to work with the official to make Filecoin a more secure and stable network. I don't want everyone to come to 1475 again.

He appreciates everyone's attention, but still wants to keep a mysterious identity. He still hopes that everyone will pay more attention to Filecoin and make the network more perfect.

Keren visited the 1475 team and thanked them for their support.

A community member who declined to disclose personal information said.

"T01475 only used four mining machines to participate in this test. There is no advantage in the calculation power."

I confirmed with t01475 again that he still did not agree to be public.

It is just a miner code for the first phase of the testnet. The testnet will soon usher in the second phase, and the node t01475 will randomly change hands.

Decentralized storage systems have very high requirements for the development capabilities and operation and maintenance capabilities of technical teams. Decentralized networks can only become larger and stronger with more people participating.

So, from another perspective:

To slander 1475 is to slander yourself.

The business is still to be done, if you really want to cooperate with 1475, you can contact me.

The top 10 consulting companies in the world have entered the blockchain: Ernst & Young, Puhua has a wide distribution, and Bain has many investment projects.