Editor's Note: The original title was "The Significance of Turbulent Currency Markets for Cryptocurrencies"

The US stock market hit a record high, the unemployment rate hit a record low, and the currency market cast a shadow over the traditional market, showing the uncertainty of the economy. If you focus on mainstream finance, then I believe you have heard of repo markets, which have been forcing the Federal Reserve to intervene regularly. The Fed has poured billions of dollars into the market, but banks are still fighting for reserves. The uncertainty brought by traditional finance may be the perfect catalyst for Bitcoin and blockchain technology. Personally, I think the problem we face today is why Bitcoin was born about 10 years ago. The similarities between Bitcoin and gold are unquestionable, but before I delve into it, let me quickly explain the money market and how central banks use repurchase agreements to expand and tighten the economy.

The largest pawnshop in the world

A buyback agreement is a short-term loan that the Federal Reserve and other central banks use to extend credit, control interest rates, and guide the economy. Repurchase dealers sell government securities to large investors at slightly higher prices, usually after a short period of time to buy them back. The slight price difference is the implied overnight interest rate. The central bank controls money supply through repurchases and provides market liquidity in times of economic contraction. Changes in the money supply will affect the credit lines of commercial companies and ordinary borrowers, and ultimately control supply and demand.

For example, if central banks are concerned about market tightening, they will use repo operations to ease the economic downturn. The Fed is expanding the market by using reserve cash to buy government bonds from commercial banks. When banks convert securities into cash, they can issue more loans to consumers and meet reserve requirements. Excluding large-scale exchanges, you can think of them as short-term pawns between the Federal Reserve and commercial banks.

Is the repo market dead?

The money market shows great pressure, and some experts say the money market may even collapse. Almost all of the cash available for repurchase operations disappeared less than a few months ago, prompting the Fed to make billions of dollars in emergency capital injections for the first time since the financial crisis. According to data from the Bank for International Settlements (BIS), while hedge funds are driving demand, the top four U.S. banks are reluctant to lend cash. This led to a 10% surge in overnight repo rates, forcing the Fed to take action. Since the lending rate soared, the Fed has been actively trying to stabilize the currency market, even launching long-term loans and starting to buy Treasury bills. As a result of the Fed's multiple active interventions, a continuous quantitative easing (QE) policy has emerged.

The signs that the central bank is out of control are becoming increasingly apparent. Every time the Fed injects liquidity into the market, the liquidity disappears, and people have to inject more liquidity, otherwise the market risks collapsing. The central bank cannot explain why trillions of dollars have disappeared, but without this liquidity, markets would not function properly.

Imagine working capital as a kind of oil that can lubricate the world economy, and as the engine turns, more oil is needed, then two things may happen: First, if the oil supply is cut off, the engine will stop Work, the world economy will collapse; or if you continue to refuel your engines, you will eventually need to replace other oil. The money market is at a time when oil needs to be changed or the market is at risk. But the central bank cannot liquidate the world's money supply to properly rebalance everything, so it cannot replace oil. What's the best situation? Fill the engine with new oil.

This is exactly what central banks have been doing with quantitative easing since 2009. Just like the repo operation, quantitative easing is a monetary policy used by the central bank to circulate liquidity throughout the economy, but because of low interest rates, the central bank has no choice but to buy from banks using new funds instead of reserves assets. The introduction of new funds is extinguishing the global economic engine, while plunging everyone into a debt crisis, widening the gap between rich and poor, and prolonging real problems.

Where to go from here?

With the rise of Bitcoin and cryptocurrencies, mainstream adoption is taking effect. Banks around the world are adopting this new technology, and more and more people feel comfortable using blockchain technology in their daily lives. It is increasingly apparent that not only is our current financial infrastructure damaged, it is also collapsing, and it makes sense to adopt blockchain technology.

Although I admit that I doubt whether Bitcoin or any existing cryptocurrency will replace the dollar or euro, I do think they will play a bigger role. With the adoption of currency tokenization, retail stores, banks and other institutions used by consumers will be forced to integrate Bitcoin, Ethereum and other mainstream cryptocurrencies. This will open the door for new capital and greatly expand the market.

One of the main reasons for the use of Bitcoin is its fixed output. Just like gold, the supply of bitcoin is limited, which plays an important role in the nature of the currency. Throughout history, governments have devalued currencies through hyperinflation, and blockchain can solve this historic problem. Similar to Bitcoin, currency tokenization can automate output, but it will not cause unexpected consequences like the quantitative easing we implement.

As the central bank increases the use of monetary policy, we see the impact of uncertainty variables.

"Banks are issuing more banknotes than ever before, but these banknotes seem to be disappearing from the earth. Central banks do not know where the money went or why, they are playing detectives trying to solve the same mystery . " 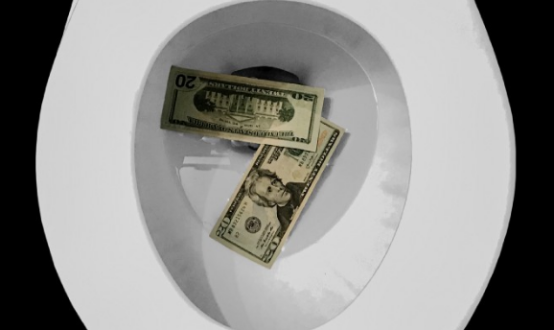 Yes, central banks are losing track of the global money supply, which could lead to hyperinflation. If you are familiar with the partial reserve banking system, then you know that this can be a very serious problem. Our global economy is based on consumer-backed debt, which has grown significantly and will continue to do so. The central bank controls the situation, but blindly compiles the rulebook. The current bankruptcy is only a matter of time.

Because political, personal, and immoral factors affect the economic decisions of the central bank, using blockchain technology to achieve automatic monetization may be the solution we need to reduce human error and corruption. It's becoming increasingly clear that people prefer currencies like Bitcoin and gold because there is less intervention. If the central bank does not follow suit, people may end up making decisions for them.

This article represents the original opinion of the original author. First.VIP is always objective and neutral, presenting readers with diverse information for learning and communication, and does not constitute investment advice.

Wang Yongli: Libra seems to get rid of the shadow of the token that is just some kind of legal currency.