In recent hours, at least 6 bloggers on Youtube regarding encryption have stated that according to the site's "harmful and dangerous" policy, their content will be deleted. Chris Dunn is one of them. His channel has more than 200,000 subscribers, but many videos were deleted at the same time. At the same time, at least 5 other bloggers also said that they had a similar situation. They even received It is a ban.

Some have speculated that the review of the removal of well-known crypto channel bloggers including Chris Dunn, Chico crypto, the Cryptoverse, crypto Tips and BTC Sessions may herald a larger cleansing operation and may soon arrive Smaller channels. In Dunn's case, it was reported that most of his encrypted content was deleted, leaving a very large blank space when uploaded to his channel, which seems to have taken him nearly two years to produce the content . 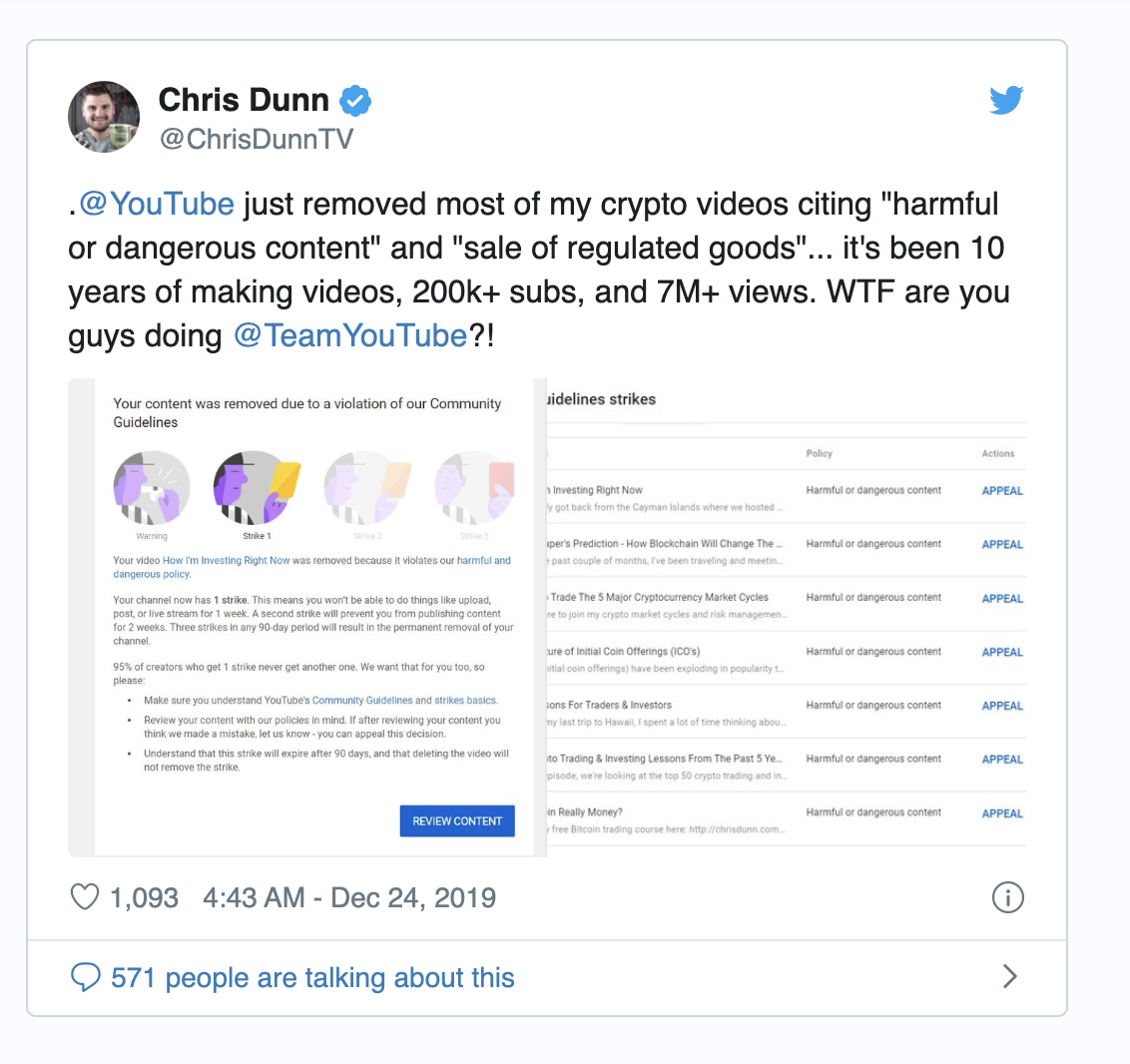 Chico Crypto tweeted that he had 67,000 subscribers and that after multiple videos were deleted, he was banned from posting content on Youtube for a week.

Chico Crypto said: "@Youtube recorded a video where I asked the hot girls if they had heard of Bitcoin. Yes, this is correct, just asking them if they" heared "… because of" harmful and dangerous content "I think it's dangerous to hear about BTC again. 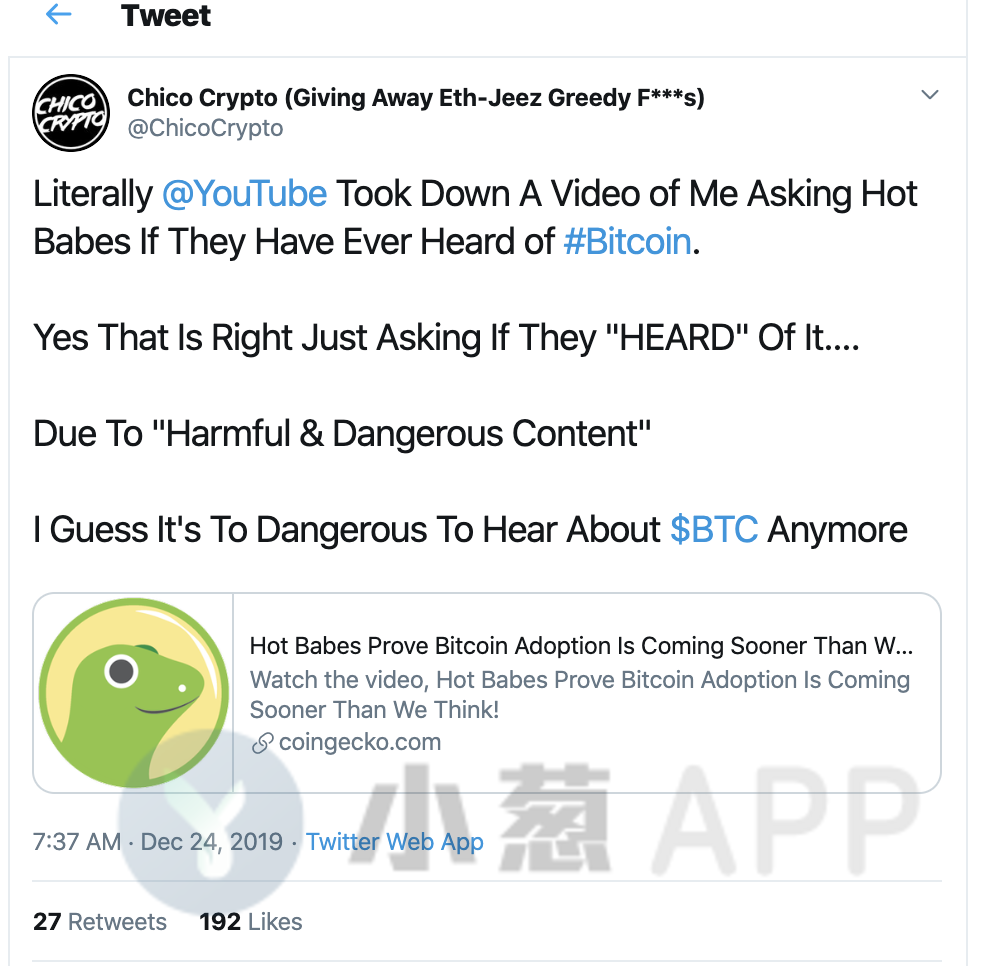 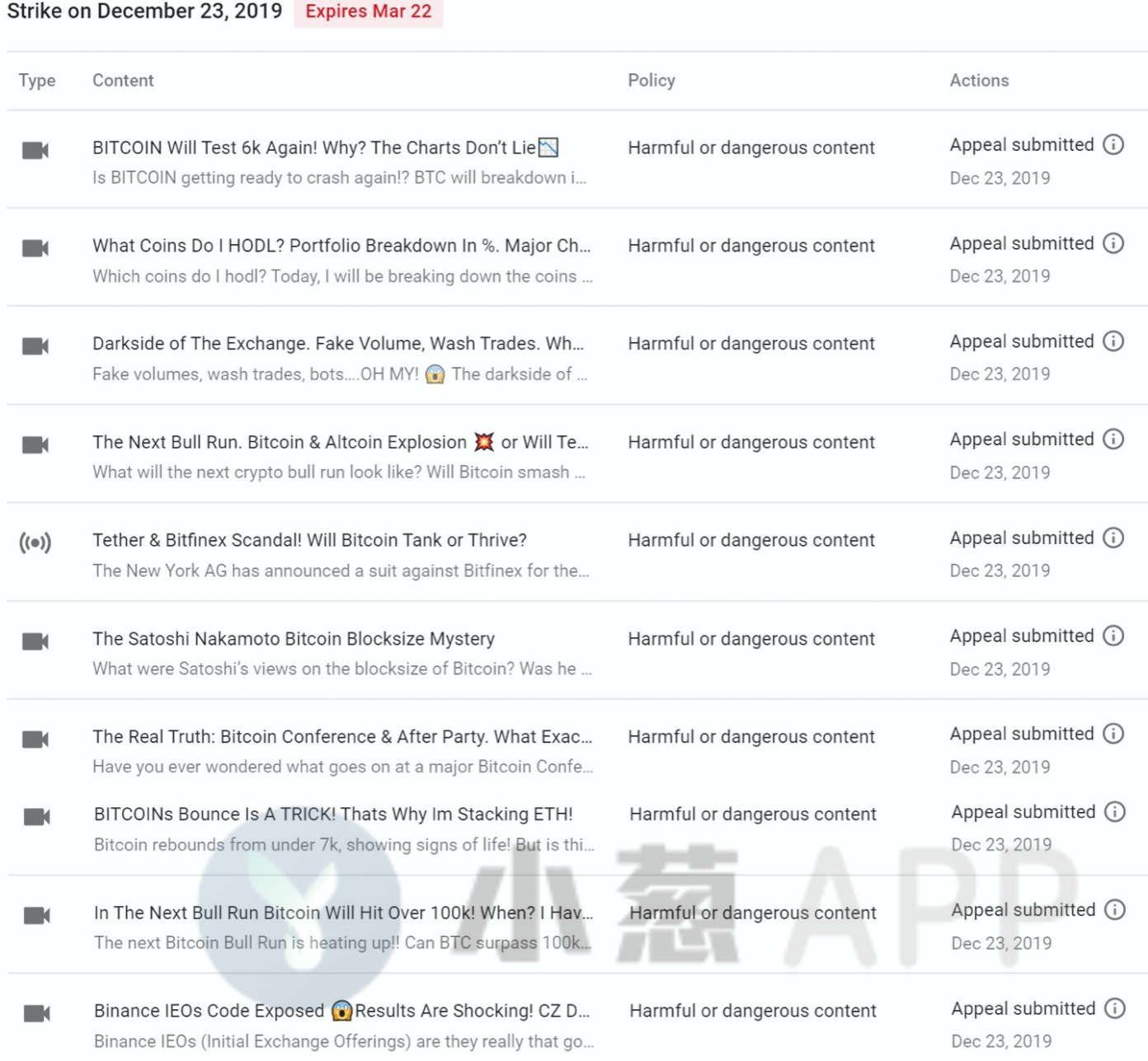 Screenshot of list of videos deleted by Chico Crypto

Chris Coney of The Cryptoverse on Youtube channel confirmed that he was also affected. He said, "They also caught me." Today I received the email in my inbox. Cryptocurrency influencer Tone Vays replied: "Damn, my show is called" Trading Bitcoin "and I believe I will be on their list as well."

Heidi, an encrypted channel creator with more than 55,000 subscribers, said: My channel has also been affected by a new wave of censorship. This is probably the 'fun' to work with a suffocating, centralized entity. She then tells her users where they can find her if she is deleted.

Another possible cause speculation: may involve personal conflict

Although many people point to centralized, large-scale crypto censorship on Youtube, others suspect that it may involve more personal conflicts . A screenshot of a telegram conversation posted by Chico Crypto shows that a user named @IamSamSmith said: "This is just the beginning of your 'Chico' demise." You have ignited a war you can't win. I swear to bring you the same pain as you did to me. We will continue to report. "

The user's self-description is as follows: "Fight against racist crooks in the crypto space." When news.Bitcoin.com reached the user via Telegram, he claimed "I absolutely banned chicocrypto." When asked about other channels, he claimed that he was also involved in the removal of the channel's content, saying: "Many channels are anti-Indian and they make hate speech."

On his telegram channel Sam Smith Truth, a user wrote: YouTube eventually opposed the "white group" of cryptocurrencies by deleting videos and issuing warnings. Diversity is a beautiful thing, and cryptocurrencies should welcome all backgrounds.

Amid the uproar, many in the industry have suggested that users move their content to social media platforms that are less centralized and more resistant to censorship. Possible alternatives include Dtube, Steemit, Bitchute, Bittube, Dlive and Flote. It remains to be seen whether this is an unpleasant case of an independent entity reporting an affected channel or a case where Youtube itself cleans up encrypted content in a more organized manner. This is not the first time this super popular video sharing platform has been criticized for unfair censorship and controversial removal of users. In any case, at least 6 users claim to have been affected by the removal of the video at the latest news release, and the number of complaints seems to be increasing.

Report: Germany is leading the pace of development in the field of financial technology such as European securities-based tokens