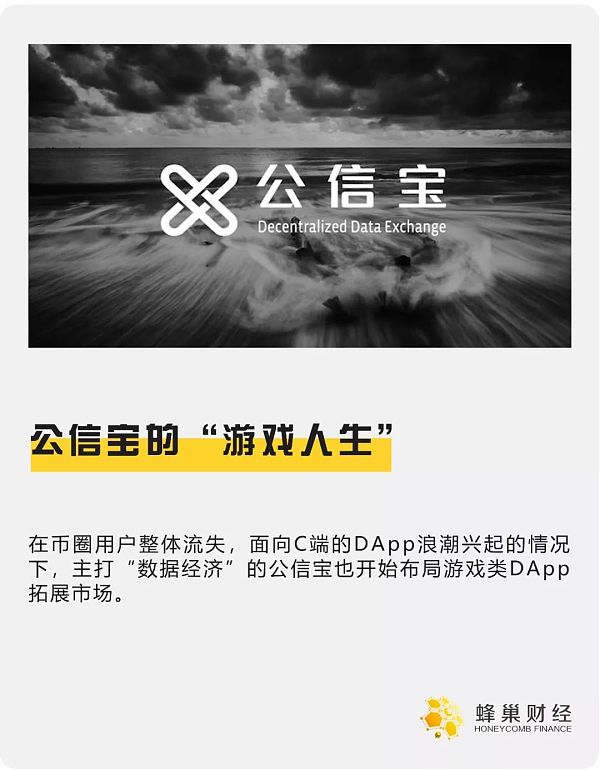 Recently, Gongxinbao announced that it will launch the first 3D blockchain mobile game DApp "Pirate Hegemony", which was opened in early April this year. This domestic public chain, which was originally cut into the blockchain industry from data trading, now tilts resources and energy toward game-like applications.

In the past 2018, the market as a whole bears, leading to the loss of currency funds and users. Compared with the “data transaction”, the game’s appeal to C-end users is obviously more “grounded”.

The public chain team that regards game-like applications as a development direction is not only a public letter, but as early as May last year, NEO extended its business to the field. They recruit developers, host competitions, develop games, and prepare for building a game development platform.

In the market where gambling DApp is prevalent, the application of Brock City on the line is also facing the dilemma of being accused. Some users said that some of the small games inside are fund trays, which in fact led to a group of users leaving the community.

In response to this, the company believes that Honeycomb Finance said that in the early days of the game, there were some games that were not friendly to the players. This year the team has turned away all the games that are funded and gambling.

In 2018, the market shrinks and public trust looks for new growth points.

Recently, GXChain announced that it will launch the first 3D blockchain mobile game DApp "Pirates Hegemony". The game was opened in early April this year, supporting Brock City account login and GXC currency consumption. Up to now, a total of 10 game-based DApps based on public letter treasure have landed in Brock City. 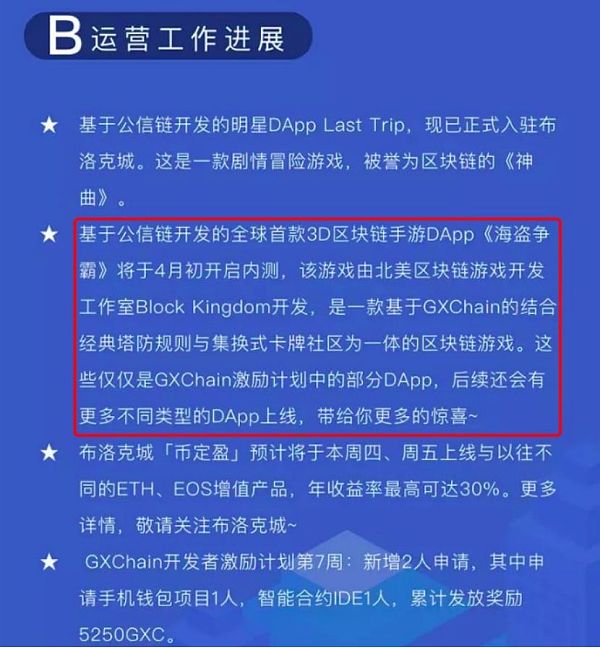 On March 19th, Gongxinbao disclosed the news of the upcoming "Pirates Hegemony" in the weekly report of the project.

Brock City is the DApp product launched by Gongxinbao at the beginning of last year. According to official data, there are over 2.2 million registered users. Coupled with the war strategy game Chaos, which was just announced recently, Brock City has connected two games in two months, and the new action has obviously accelerated. The original letter from the data transaction into the blockchain industry is now also laying out the game DApp.

At the beginning of its birth, Gongxinbao claimed that its core business was data trading, building a decentralized data exchange based on blockchain technology to help data buyers and sellers achieve peer-to-peer transactions.

On January 12 last year, Buick City, the DApp product of Gongxinbao, was launched. It encouraged users to use personal data for mining, that is, to obtain token rewards by binding personal information such as Alipay, Jingdong, Xuexin.com and mobile phone numbers.

Massive data is undoubtedly enough to attract merchants to buy, and the purpose of Gongxinbao is still to be a data value network. In October last year, Gongxinbao released a 3.0 version of the white paper. At the beginning, “GXChain is a basic chain for the global data economy, aiming to build a value network of trusted data”.

The question is, how does Brock City and the public trust chain attract enough users to contribute enough data to attract merchants?

In the past 2018, the market as a whole bears, leading to the loss of money and users, and the market is shrinking. In May of last year, the public letter coin GXC (then called GXS) fell from $10 at the beginning of the year to $4.

In addition, the rise of the third-generation public chain represented by EOS has attracted a large number of DApp developers to settle in and set off a wave of DApp. According to Dappreview, the current number of users and the majority of transactions are for gaming and game DApps.

In the case of the overall loss of the users of the currency circle and the rise of the Dapp wave towards the C-end, the public letter treasure of the main "data transaction" also began to lay out the game class DApp to retain users and expand the market.

In response to this, Gongxinbao responded to Honeycomb Finance, saying that the game DApp is regarded by the team as one of the main categories of real user needs, and the team is currently helping quality game developers. “We have been paying attention to DApp since last year. At that time, it had a lot of imagination, but there were also serious data and capital bubbles. This year, the market is gradually returning to rationality.”

The game class DApp is seen as an application that is easier to land and commercialize. For C-end users, the game is obviously more "grounded" than the "data transaction".

As early as last August, Huang Minqiang, the founder of Gongxinbao, revealed the idea that GXChain would lay out the game industry when interviewed by Honeycomb. He said that supporting games and finance-based applications is easier because it is easy to land. “It’s easier for developers to iterate over updates and mine more needs.”

In fact, the public chain team that regards game-like applications as the direction of expansion is more than a public treasure. As early as last May, another well-known domestic public network NEO extended its business to the game field. They recruit developers, host competitions, develop games, and prepare for building a game development platform.

On March 9th, NEOGameCon 2019, a blockchain game conference hosted by NEO, was held in Akihabara, Tokyo, Japan. At the meeting, Wang Jiachao, director of project ecological development, said that NEO's next goal in the game field is to become the first platform for blockchain game solutions. Wang Jiachao’s rhetoric reflects the team’s determination to work in this field.

Coincidentally, in May of last year, almost at the same time that NEO released the developer recruitment, Gongxinbao cooperated with Unitopia, a decentralized autonomous community, to launch the first quiz game, Wan Lima, on Brock City, officially knocking on the public treasure. Get involved in the door of the game class DApp. 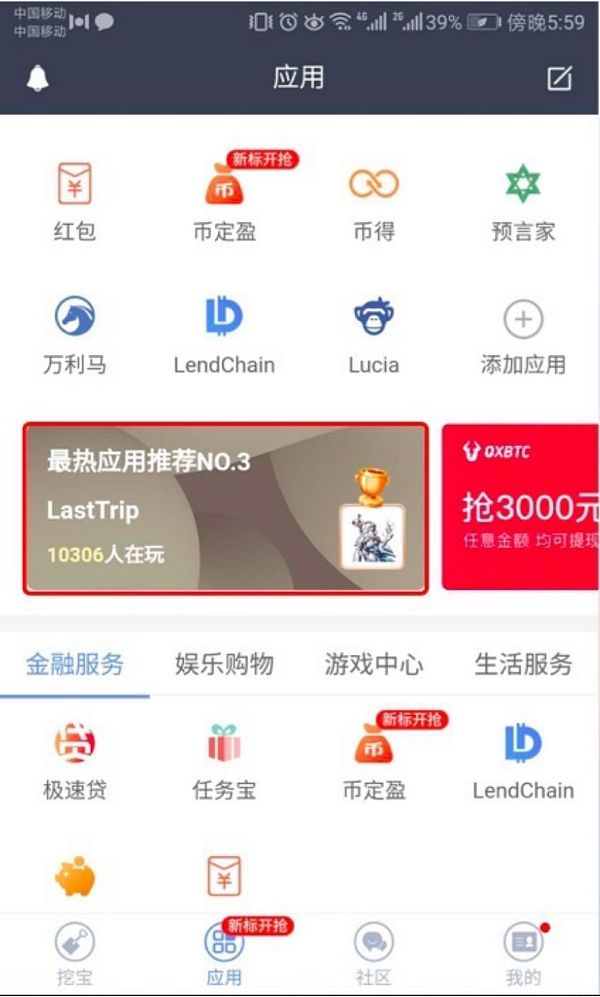 LastTrip is still the main push game in Brock City

Since then, Brock City has been on the line with cars, pony crossing rivers, lucky miners and other games. Lianbochang, the star application of the Ethereum, the LastTrip also entered the city of Brock, becoming one of the more popular applications. As of March 20th, LastTrip ranked third in the hottest application rankings in Brock City, with 12,000 users.

From the data point of view, the entry of game applications is active in the platform users, and the expenses incurred in the game are paid by GXC coins, which improves the circulation and transaction volume of the currency. As of 6 pm on March 20, GXC quoted $1.1012, up 90% from $0.56 at the beginning of the year.

The public letter treasure that chooses the game as the entrance is now gaining some attention. However, in the past application of the Brock City, the design of the game rules has been criticized by users for similar funds. In the market where the gaming DApp is prevalent, the domestic public chain GXChain faces the same dilemma.

Bullock City player Wang Xudong (a pseudonym) said that these games actually left a group of users out of the community. He told the Honeycomb Finance, and there are funds in the game. "Users uploading data to get a little Token are taken away by DApps such as Gongxinbao. They are empty gloves and white wolves. Some people will choose to leave after being pitted."

The essence of the fund disk is a pyramid-like scam, the so-called "demolition of the East Wall to fill the Western Wall", users are often vulnerable to monetary losses as long as they participate. Previously, there have been reports from the media that the public letter DApp is suspected of funding. The "Chain and Speed" that landed in Brock City last September is an example.

Regarding the external "question of the fund game", the public letter treasure responded to the Honeycomb Finance, saying that some games that were unfriendly to the players did appear in the early stages. However, this year, Gongxinbao strengthened its review and rejected those funds-gambling games. 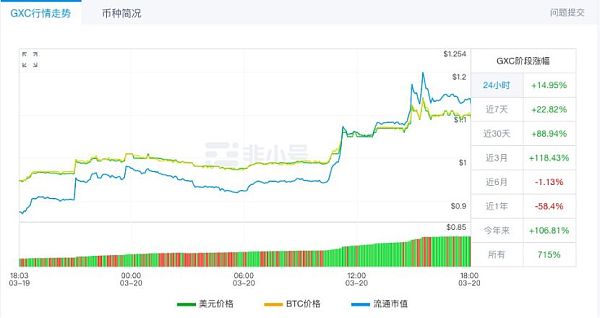 Nowadays, with the change of public trust, its trading market has begun to pick up. In the past month, GXC coins have risen nearly 60%, and prices have basically stabilized at more than $1. But compared to the peak of $10 at the beginning of January last year, GXC has a long way to go to re-enter the summit.