This article is an article published by Charles Edwards, a value investment / crypto asset investor. PayPal Finance has been authorised by the author to compile the content and title of the article accordingly.

In the bitcoin market, the factors that affect the price of bitcoin have not been conclusive. Where is Bitcoin's Value Support? What factors affect the price of coins? How to estimate the trend of Bitcoin? From the perspective of energy input, the author of this article made a hypothesis and explored the relationship between Bitcoin price and energy input, hoping to provide some reference for Bitcoin investors.

1. Discovery: The close connection between currency prices and energy consumption

Assuming other factors remain the same, let's consider a question:

Can Bitcoin's basic value be measured solely by energy consumption?

These variables can be combined into the following equation, called the energy value (V) of Bitcoin:

Since the hash rate and supply rate of all units can be offset, the equation shows that the fair value (V) of Bitcoin can be expressed as the energy consumption to produce a Bitcoin:

In order to verify this theory, all input data comes from: blockchain.info, except for the energy efficiency of mining.

The most challenging part is the accurate assessment of the energy efficiency of Bitcoin mining at different points in time.

The energy consumption of Bitcoin mining is related to two factors: the hash rate of the SHA-256 algorithm and the energy efficiency of the miner itself.

In the early days, Bitcoin was mined using high-power CPU and GPU.

And now the mining efficiency of ASIC miners is more than 100,000 times higher than that of the miners used in 2009. This means that a relatively high portion of the average electricity bill for miners today has been transformed into effective hashing power.

The daily energy efficiency of the Bitcoin network is then calculated as a weighted average of all hardware, which averages within two years after the CPU / GPU / FPGA release and within 1.5 years of the ASIC release.

The reason for choosing a depreciation period is because:

Finally, a one-month moving average of energy efficiency was calculated to phase out the model types in stages.

In fact, some mining machines have a wider range of uses and a longer service life. However, due to the risk of increasing historical errors in the energy value model and trying our best to obtain an unbiased result, we did not exclude, minify or other data operations these miners.

In the above process, over time, Bitcoin energy efficiency (J / GH) has formed the following trends. S-curve that improves with Bitcoin mining efficiency (indicating that J / GH gradually decreases over time). Please note that since the introduction of ASIC-type miners from 2013 to 2014, mining efficiency has increased dramatically.

The fiat currency factor is a constant that converts energy consumption units (joules) into fiat currencies (USD). It simply means how much we value energy.

According to the above energy efficiency curve, the fiat currency coefficient obtained is: 2.0E-15

The mapping results show that the energy value of Bitcoin is very close to historical prices.

From 2013 to 2014, the energy value of Bitcoin dropped sharply, which was mainly driven by the transformation of GPU / FPGA to ASIC miners. Although there may be a significant decline during this period, this result is likely to be exaggerated due to the hardware usage and depreciation model assumptions outlined above.

5. Market power-building a bridge between supply and demand

The first question is:

In the article "Bitcoin Value Model Built with Scarcity", Plan B found that market prices have a strong relationship with the scarcity of assets such as Bitcoin. We can assume that this represents the basic relationship between mankind's "demand" for long-term "hard currency" and value-preserving assets.

But there is a problem here.

Not all scarce assets have or maintain broad market value. For example, about 3,000 cryptocurrencies have a market value of less than $ 500. Many of these tokens have a "limited" supply model, but the market still believes they have no fundamental value. Scarce, but worthless. Scarce assets that are easily available or copied have a lower market value.

When energy (energy) is invested in an event, the energy provider (worker) expects others to have a need for what they are giving. When suppliers see the fruits of their labor and the demand for workers grows, workers will work harder to get greater returns. However, if supplier demand for labor declines, or workers get better returns elsewhere, they may stop investing in the event.

This can both explain the dispute over Bitcoin's computing power and serve as an argument for the energy value model of Bitcoin.

Continuous mining investment represents a balance between supply and demand. Rising bitcoin price through the increase of computing power and technological improvements to encourage miners to increase mining input, thereby improving energy efficiency. Therefore, a sharp increase in market prices will usually promote an increase in mining investment, and therefore increase the energy value of Bitcoin. However, when speculative actions lead to skyrocketing prices, if there is no corresponding increase in energy consumption, according to historical experience, prices will plummet back to energy values.

It represents the phenomenon of mean regression, as expected by fundamental value-driven intrinsic value estimates.

Bitcoin's price and energy value are interconnected, just like magnets. Although there may be discrepancies between the two, they are ultimately compatible. Although mathematically the value of Bitcoin's energy has nothing to do with transaction price and volume, the market's "invisible hand" linked them together.

Bitcoin value is based on the reserve production model and mining expenditures to obtain long-term demand for scarce assets, which represents the symbiotic relationship between Bitcoin supply and demand.

6. Measurement: how effective the energy value model is

According to daily data from January 2010, R2 of the "Energy Value" formula is 80% of the actual Bitcoin price (the higher R2, the more realistic the model is). In contrast, under the same data, the reserve production model has an R2 of 88% under the same data.

Although it is 8% lower than the reserve production model, there are several points to consider:

In summary, 80% R2 is considered a strong result of energy value. 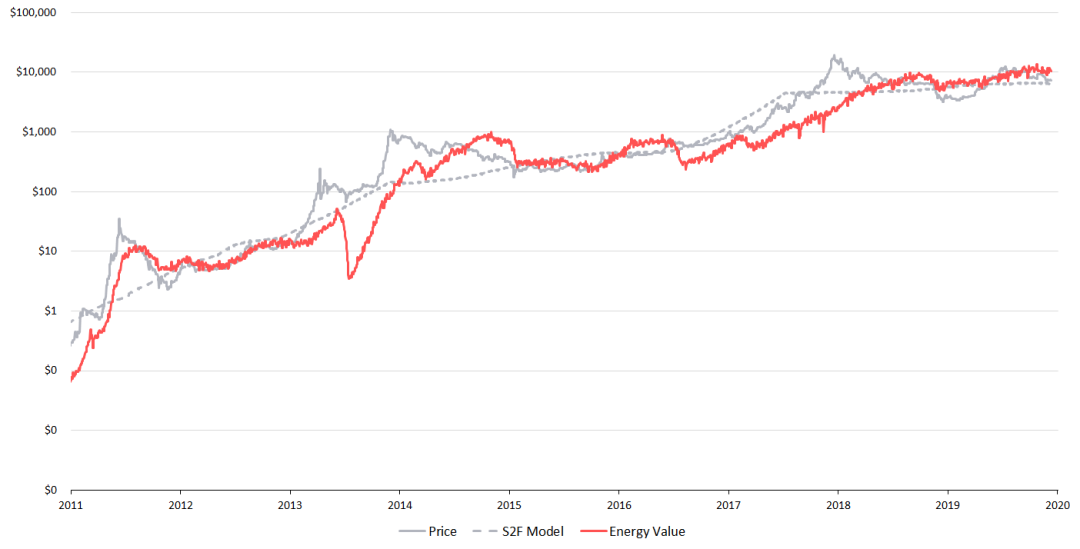 From the above figure, we can see that the inflection point and huge gap between the price of bitcoin and fair value herald a good time for buying and selling bitcoin.

The energy value formula states that Bitcoin's current (December 12, 2019) fair value is approximately $ 11,500, which is 50% higher than the current transaction price.

This shows that Bitcoin will have a huge risk reward in early December 2019. The following energy value oscillation chart also gives a positive signal.

However, energy consumption can drop at any time.

Bitcoin price as a percentage of energy value. The 2019 trend looks very similar to the characteristics before the start of the previous bull market.

By considering the growth of energy and supply, we discovered the intrinsic link between the price and value of Bitcoin.

Bitcoin's value is a function of its energy input in joules.

Here are some implications of the energy value model:

If Bitcoin is heavily used as a value storage tool or a global currency, we may have more financial data indicating that its value is intrinsically linked to the energy consumed in mining activities.

Tip: Investment is risky and you must be cautious when entering the market. This information is not intended as investment and financial advice. 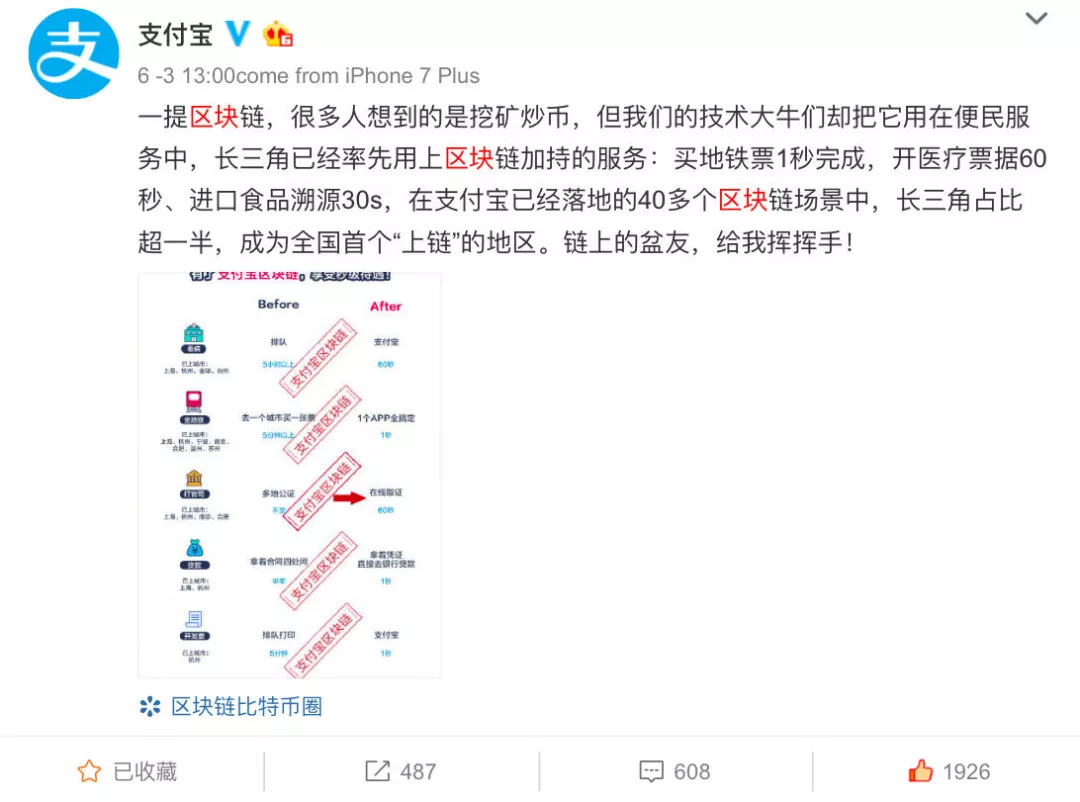 Yangchun has arrived in April, and cryptocurrencies continue to rise against the trend?