On December 25, the Blockchain 50 Index released the day before by the China Securities Index rose 0.66%, which was narrower than the increase on the release date.

On December 24, the Shenzhen Stock Exchange released the first blockchain index in the two cities, the "Blockchain 50 Index". For a while, caused industry uproar. On the evening of the same day, the official website of the China Securities Regulatory Commission showed that Penghua Fund reported that it had applied for "Public Offering of Funds-Application for Registration-Penghua SZSE Blockchain 50 Trading Open Index Securities Investment Fund", becoming the first one named after the word "blockchain" fund. It seems that investors in traditional capital markets have the bonus to share the booming development of the blockchain industry.

However, compared with other industry (industry) indexes published by the Shenzhen Stock Exchange, the "Blockchain 50" is more like a "premature child": the pulse of the inter-chain has combed the blockchain business of these 50 constituent stocks, of which only Five companies achieved revenue through blockchain, and their proportion of revenue was insignificant, and nearly 40% of the company's blockchain business is still in the research and exploration stage.

Not only Shenzhen, A shares, and even the world, the blockchain is still in the "concept stock" stage. Its concept boundaries are unclear and business income is unknown. If institutional investors are pursuing "concepts" through the index, they will promote "value investment". What kind of explanation?

The Blockchain 50 Index is produced by the China Securities Index of Shenzhen Securities Information Co., Ltd. Index Division. It is true that the index has a certain positive role in promoting the development of the blockchain industry. The Director of the Institute of Finance and Modern Industry of China (Shenzhen) Institute of Comprehensive Development said in an interview with Nandu Weekly that the Shenzhen Stock Exchange launched the Shenzhen Stock Exchange 50 Index at this time for two main reasons. Listed companies on the Shenzhen Stock Exchange involve the application of blockchain and the layout of the industry's upstream and downstream. Second, recently, high-level executives have expressed their determination to vigorously develop blockchain technology, and the market has also followed it, which can reflect the performance of blockchain-related companies. "

But the index is somewhat "unusual."

First, when the Shenzhen Stock Exchange and the China Securities Index issued the announcement of the Blockchain 50 Index on the morning of December 24, the constituent stocks were not released in time. The interchain pulse called the China Securities Index, and the answer was that it would be released on the same day, but did not explain. Reasons for the postponement. According to a number of large fund company sources who have told Mutual Pulse, this situation is extremely rare, and many fund managers have said they have not encountered it in their careers. In the afternoon, the official version of the constituent stocks was not disclosed.

Second, on December 25, the three documents of the index's index profile, index sample, and recent sample adjustments could not be opened. (The URL of the index profile cannot be opened: December 25)

Third, this is the only index compiled by the China Securities Index that is at a very early stage. The previously hyped concepts such as "graphene", "superconducting", "artificial meat" and so on have failed to enter the "law eye" of the China National Securities Index.

Generally speaking, securities indices are generated during securities trading activities. It is not only an important indicator reflecting changes in the stock market, but also a reference indicator for observing the economic situation and cyclical conditions. Therefore, the boundaries of index constituents need to be clear, and constituents can reflect the economic characteristics of the index. However, the blockchain is still very early, and the blockchain business of no listed company has become the "main business income" of the enterprise.

If the screening criteria for the constituent stocks of the Blockchain 50 are placed in the Shanghai Stock Exchange, almost all banks, insurances, and central enterprises will be included because they are involved in the blockchain, such as China Merchants Bank, China Construction Bank, China Life Insurance, Sinopec and so on. Live off a financial + central SOE portfolio.

The above questions have challenged the "openness and transparency" of the guiding principle of securities index compilation.

What is the "quality" of the 50 constituent stocks?

The release of the Blockchain 50 Index has achieved a new round of rise in blockchain concept stocks.

Mutual Chain Pulse sorted out the blockchain business of 50 constituent stocks and classified them for analysis. Among all the constituent stocks, there are only 5 companies that have disclosed in the public information (semi-annual report, annual report, interactive Q & A, and public news reports of listed companies) that only 5 companies have achieved revenue through blockchain business; There are 20 companies that have not invested directly in the practice of blockchain, accounting for 40%. Among them, the five companies that have achieved revenue through the blockchain are Hailian Jinhui, Yuanguang Software, Two Three Four Five, Aikang Technology and Zhongqingbao. Two three four five, Zhongqingbao are all engaged in mining machine related business, and this is the main profit method of the blockchain business. Hailian Jinhui is doing BAAS services in the industrial foundation. Highlight Software and Aikang Technology are mainly engaged in the practice of blockchain finance. Hailian Jinhui and Yuanguang Software both obtained blockchain revenue by winning government bids. 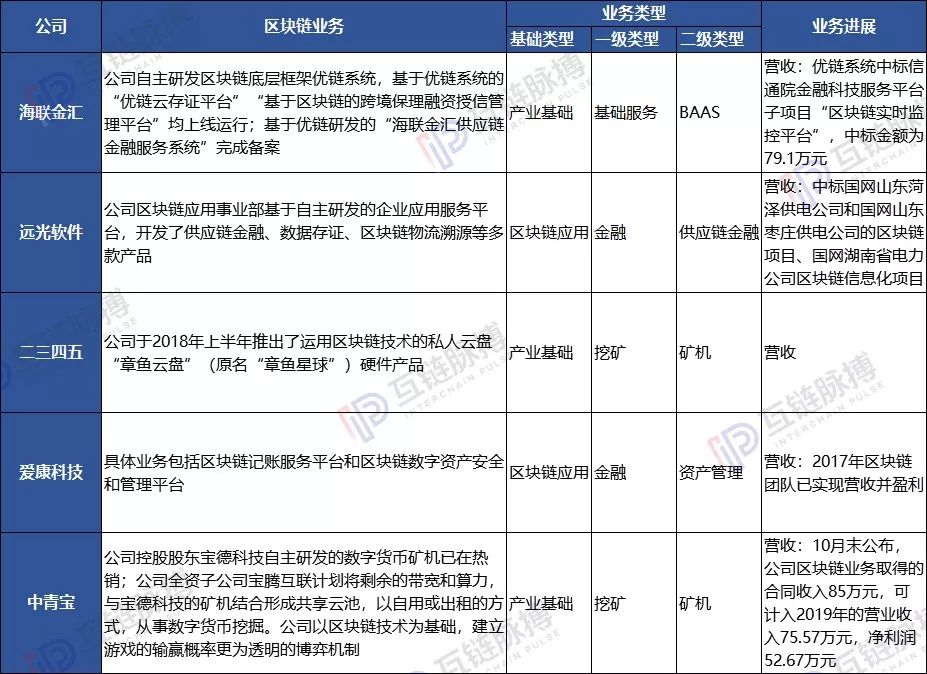 But even though the above companies have achieved revenue through blockchain business, profits are still very small. As Zhongqingbao revealed, its blockchain business accounted for a relatively small revenue. Donggang, Kaiying Network, and Gao Weida have also said that the blockchain business has less revenue and cannot yet have a significant impact on the improvement of the company's operating performance; or it has not yet generated direct economic benefits and has not yet formed substantial operations. influences.

In addition, of these 50 companies, there are still 20 companies that are still conducting blockchain research and investment. Giant Network, Xinguodu, Beixinyuan and Dongfangtong have all invested in companies engaged in blockchain business. According to public data inquiries, 16 companies including Visual China, Flush, and Oriental Fortune are still in the research and exploration stage of the blockchain, and have not yet formed a business.

For example, Vision China stated that blockchain technology has rich business application scenarios in Vision China's main business, and has been paying close attention to the latest progress of this technology in the digital copyright industry. Flush said that the company has reserved certain blockchain-related technologies and is actively exploring the application of blockchain-related technologies in the field of Internet financial information services.

In addition, if we pay more attention to the constituent stocks that carry out the practice of blockchain, we can see that the development direction is mainly the blockchain application and industrial foundation (mainly developing companies in the field of BAAS platforms, mining machines, and security protection). Second only to finance, the second most important direction is digital vouchers. Guangdian Express, SF Holdings, Sifang Jingchuang, Suning Tesco, Jinglan Technology and Meiyingsen all belong to this category, and most of them are in the direction of traceability. For example, SF Holdings has realized the application of multiple scenarios such as drugs, vaccines and medical and pharmaceutical devices; cross-border goods and food. Jinglan Technology's "Blockchain Agricultural Production Traceability System" has also completed filing.

In addition to the analysis of the revenue, research and practice, and practice types of the 50 constituent stocks, Interchain Pulse also paid attention to the fact that among these 50 companies, there are very few companies with a blockchain business as their main business direction, only two or three or four. Five is an example. Most of the remaining companies are mainly in the fields of technology finance and software.

In the future, it remains to be seen how the index using these 50 companies as a sample will reflect the market and assist investors.