In a recently released developer report, Electric Capital evaluated several dimensions from Github code activity, Github Fork, smart contract interactions, and other metrics (such as the Truffle development framework to evaluate downloads) based on 130,000 developer data. Developer community situation for 3000 blockchain projects. Let us more intuitively see the developer ecology of this field and its impact on the development of the project.

So what is the meaning of the developer for the blockchain project side?

The creator of the application is the developer. For the project to build a long-term ecology, the developer will help you to win the user, and many retail investors are not users. I also mentioned a trend in the article ( https://orange.xyz/p/371 ). Many projects realized that after this, they began to stop aimless airdrop activities, but they tried to reward those who have ecological The contributing developers will shift their focus to how to grow the developer community.

Take the forecast market agreement Augur as an example (its token is REP). Many operations on the Augur network require REP, such as creating markets and resolving disputes. In theory, REP will appreciate as the amount of network usage increases, but ordinary users cannot use the protocol directly, and can only use the protocol indirectly by using an application built by the developer on top of the protocol. Here is the simplification of Augur's token model, just to illustrate the role of the developer.

The circle is so small, the global developer battles

In the past few years, teams in the blockchain field have invested a lot of resources to attract developers. In 2018, the team behind the EOS, Block One, spent millions of dollars on hackathons around the world. Ethereum founder Vitalik Buterin is also constantly speaking on the world tour. Some of the most common strategies employed by the blockchain team include hackathons, project grants, and the establishment of eco-funds.

Some mainstream projects, such as Ethereum, rely heavily on hackathon to embrace developers. Since the ETHWaterloo hackathon in October 2017, they have hosted a large hackathon of no less than six games, attracting more than 4,000 developers. In February of this year, ETH Denver attracted more than 1,000 developers, more than the number of 2018 a year.

Objectively speaking, the effectiveness of hackathons to keep people in an ecosystem is not so certain. Many of the teams that sponsored the blockchain hackathon told me that most of the projects disappeared after the hackathon. It's no surprise that many developers like ETHDenver who participated in the hackathon on weekends have had to return to full-time work on Monday morning.

But what I want to emphasize is that there are really many influential projects that stand out from hackathon. Felix Feng created the earliest version of the Set Protocol on the ETH Waterloo hackathon in October 2017. A few months later, he raised $2 million from a group of prominent investors. The hackathon has produced star apps like CryptoKitties and Gitcoin. In addition, these hackathons are likely to have a positive impact on the future Ethereum. For example, it is quite possible for a developer to decide to enter the field full time after attending a hackathon.

Regan, head of operations at CoinList, described what he saw when he joined ETHDenver in February. “Although there are relatively few bonuses, there are still more than 1,000 developers gathered from all over the world. There is no discussion about bonuses or token prices. On the contrary, people seem to be really excited to learn about Ethereum and get to know each other positively. Others from the community. Although some progress in the Ethereum community is not satisfactory, I really believe that the communities they have built are difficult to replicate."

The subsidy mentioned here refers to the non-dilution fund subsidy for the team that builds the application on a specific agreement, a bit like the Bounty Program. For example, the DEVGrants project launched by the Ethereum Foundation in early 2015 provided a small grant of $1,000 to $10,000 for each project. By 2018, when the Ethereum Foundation relaunched their funding projects, the stakes changed significantly, ranging from $10,000 to $1.5 million.

Most of the layers that do layer 1 have similar funding programs, including Zilliqa's $5 million grant (June 2018), Protocol Labs' $5 million research grant (April 2018), and Stellar's partner funding. Project (November 2017). While all of these grant programs are designed to promote ecosystem growth, their specific goals are different. For example, Zilliqa focuses on "developing new applications on its open source technology platform." Protocol Labs (Filecoin) focuses their funding projects on core development challenges, such as their consensus algorithms.

The effectiveness of these plans is still hard to say. Because these projects have not been developed for more than two years, and these projects rarely publish data publicly, it is too early to assess the success of early companies. But there are also some success stories. For example, the Ethereum Foundation provided Uniswap with $100,000 in grants in August 2018. Since then, Uniswap has embarked on the fast lane, and currently has $7 million in asset pools on smart contracts.

The “ecological fund” here is broadly a management fund that invests in dilute capital, with the goal of developing specific ecosystems or agreements. This is an evolution of corporate venture capital. Companies set up ecological funds to make strategic and financial investments in early start-ups, so those that invest in crypto just to get a return on investment are not ecological funds.

Consensys is a typical representative of the eco-fund. Its investment ecology includes: Truffle is a development framework of Ethereum, with hundreds of thousands of downloads. MetaMask is the world's most popular Ethernet wallet with over 1.3 million downloads.

The general practice of the agreement is to allocate a portion of the fund as an ecological fund through a foundation (usually through ICO). EOS raised $4 billion in ICO and allocated $1 billion to invest in eco-projects built on EOS. In addition, EOS has also co-founded a $100 million European fund and a $200 million Asian fund.

Although there is not much data support, developers seem to be buying it. Regan said that he had talked with a number of teams that decided to build projects based on EOS. The fundamental motivation was that the bonuses drove them to choose to come here to develop (and of course other factors such as ecological optimism).

Because I have been paying attention to and participating in the online hackathon of gitcoin during this time, this process has led me to another idea that may effectively build a developer community, and further stimulated the way of distributed collaboration.

This is a 15-day online Hackathon co-sponsored by Microsoft and Gitcoin, mainly in the form of bounty, and encourages you to submit your own innovative projects not limited to bounty. All bonuses are denominated in Dai, ranging from a few hundred to a few thousand. The sponsors of the competition include 17 parties and companies in the encryption field including Microsoft, Consensys labs, Mythx, Nucypher, and Chainlink.

In the process, I observed some of the developer's performance. 1. Contribute superior skills, actively seek organization 2. Demand for collaboration 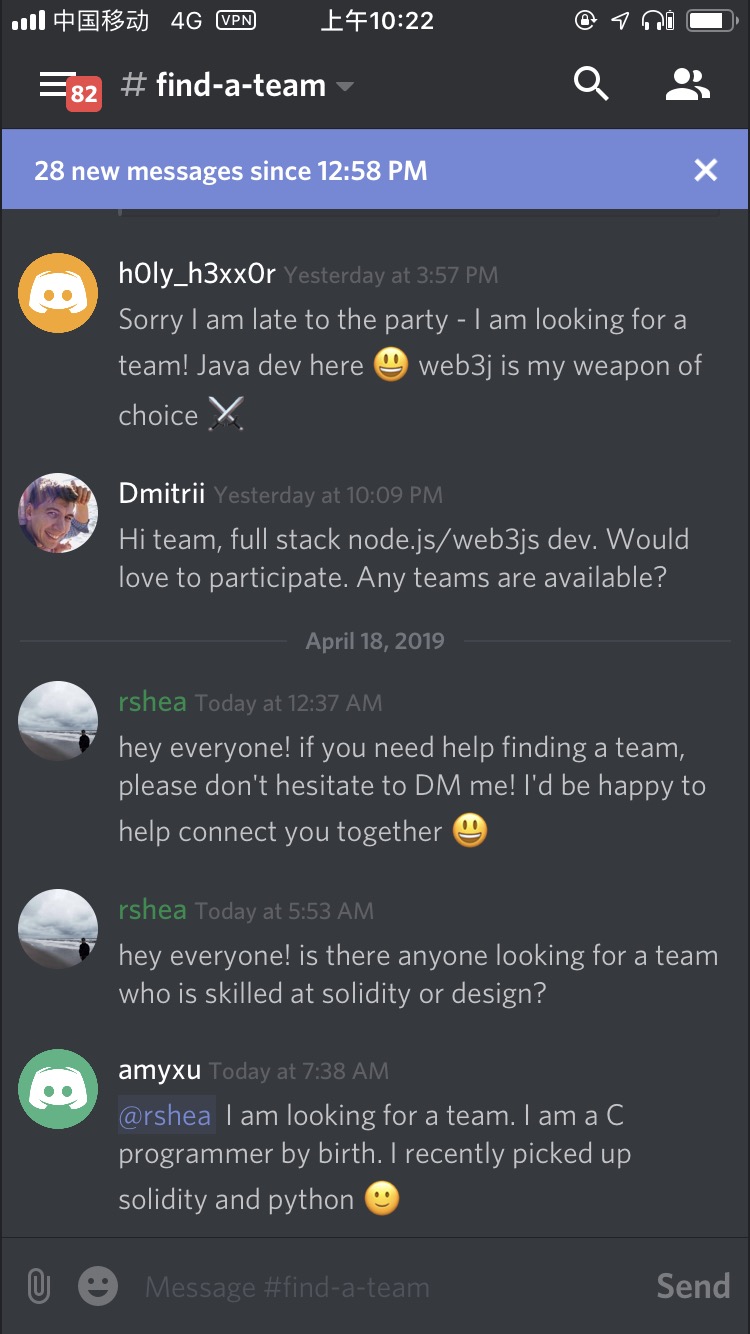 In general, hackathon should be a kind of offline activity, 24 hours of group blasting through the liver. But think about it, hackathon itself reflects a distributed collaboration approach. This hackathon allowed me to see the synergy that online can replace the offline experience. That is to say, all the things that need to be done through offline contact can enhance the experience through online tools, and even give developers more space to innovate and collaborate. For the project side, it is also possible to attract developers around the world at a lower cost.

So what does Gitcoin and the participants do?

4.Zoom line above the basic meeting, enhance communication and trust to open the Zoom channel, regularly organize online hacker face-to-face meeting, mainly to help the group. The sponsors are invited to explain the questions and provide guidance.

Second, the communication and interaction between the participants is very sufficient.

With the above tools, unless the bonus you set is very eye-catching, the developer will not take the initiative to come to the bowl. So the necessary communication is extremely important in attracting developers. The premise of this communication is to know clearly what developers need to do and know what they can do for developers. The impression is deeper in a conversation in the Consensys Labs group . The developer kiba in the picture has to do a data forward market and explain the ideas from both the data provider and the data producer. Then Gabe of Consensys labs came out to affirm the idea and raised questions at the same time: 1) What is the role of adding a price discovery mechanism based on the multi-party market? 2) Why do you need a blockchain? 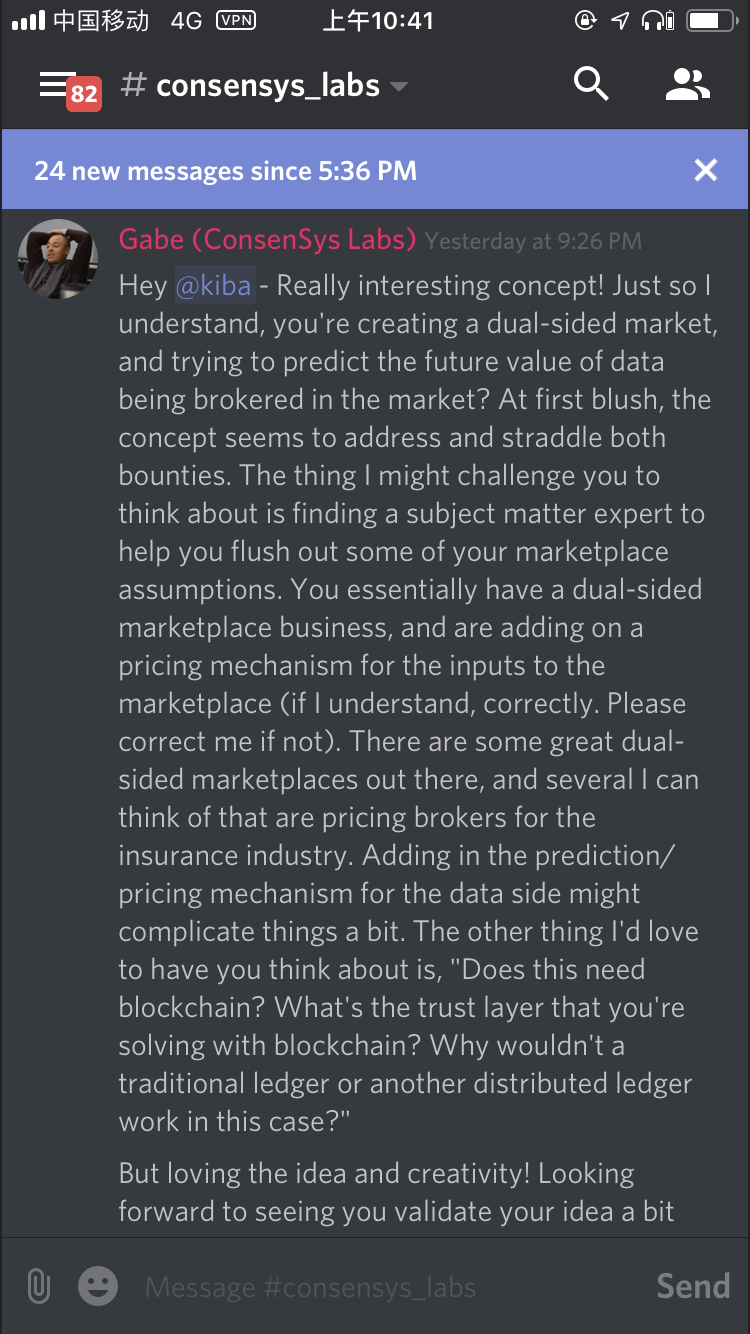 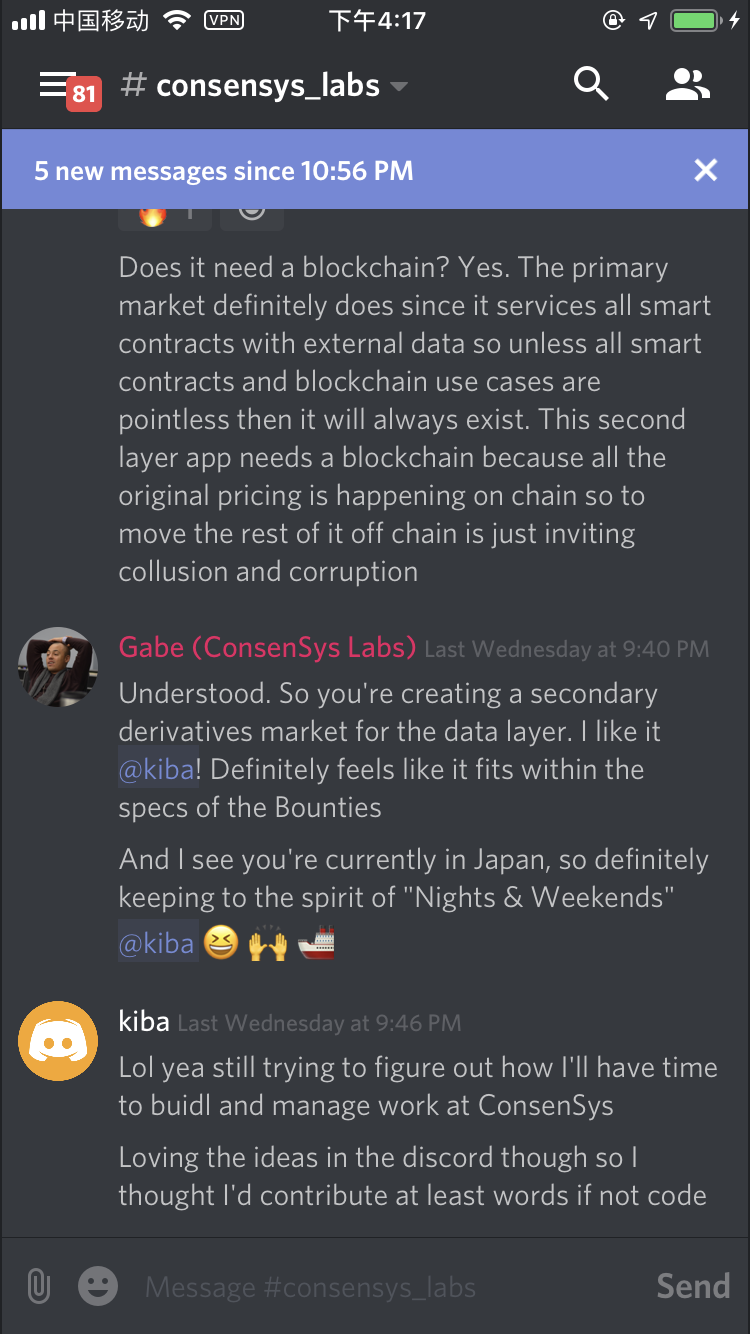 There are still many such examples. It must be said that more innovations and ideas will be stimulated in the process of this interaction. So if you don't know the developer, you don't know what kind of ecology you want to build with the developer, and it's useless to do more marketing activities.

In addition, the time of this hackahon also gave this promotion experience a full possibility. The two weeks will not be too short, allowing developers to have enough time to get to know each other. It won't be too long, so that everyone has a certain sense of urgency. After the group is finished, it will start intensive development.

Of course, most of these are superficial observations, and there are many ideas and operational details involved. This online Hackathon is also a very clever way for gitcoin to get users onboard, but the final output can also reach or exceed the level of offline intensive development hackathon, will it appear again like encryption Explosive applications like cats will be seen in two weeks.

Developer participation is still one of the most important but yet to be explored areas of the blockchain. In fact, current articles on smart contract platforms focus on technical or academic topics, such as consensus mechanisms and chain governance. These themes are of course important, but they are all based on the assumption that the entire ecology has flourished and effective. If there are no developers, these topics cannot be discussed.