BCH supporters have been participating in a series of editorial events called "Mythbusting" aimed at eliminating misinformation about the bitcoin protocol from sophistors throughout the crypto community over the past decade. These articles have been posted to read.cash, a BCH-centric blog site, and have been translated into Spanish, French, and German, which will attract more readers.

Because BCH network is not limited by artificial 1MB

An article written by Zwets called " Breakthrough : As the usage increases, BCH fees will also be very high." Many people think that because the cost of BTC increases with the amount of use, when the amount of use increases, the same thing will happen to BCH. But Zwets wrote: "This argument is untenable because of a lack of understanding." Zwets said that as usage increased, the reason for the surge in BTC fees was the 1MB block size limit. He explained in the article: "Keeping this limit is the biggest change in Bitcoin's history without change … Bitcoin Cash has a cap of 32MB, so it won't hit it in the foreseeable future. " 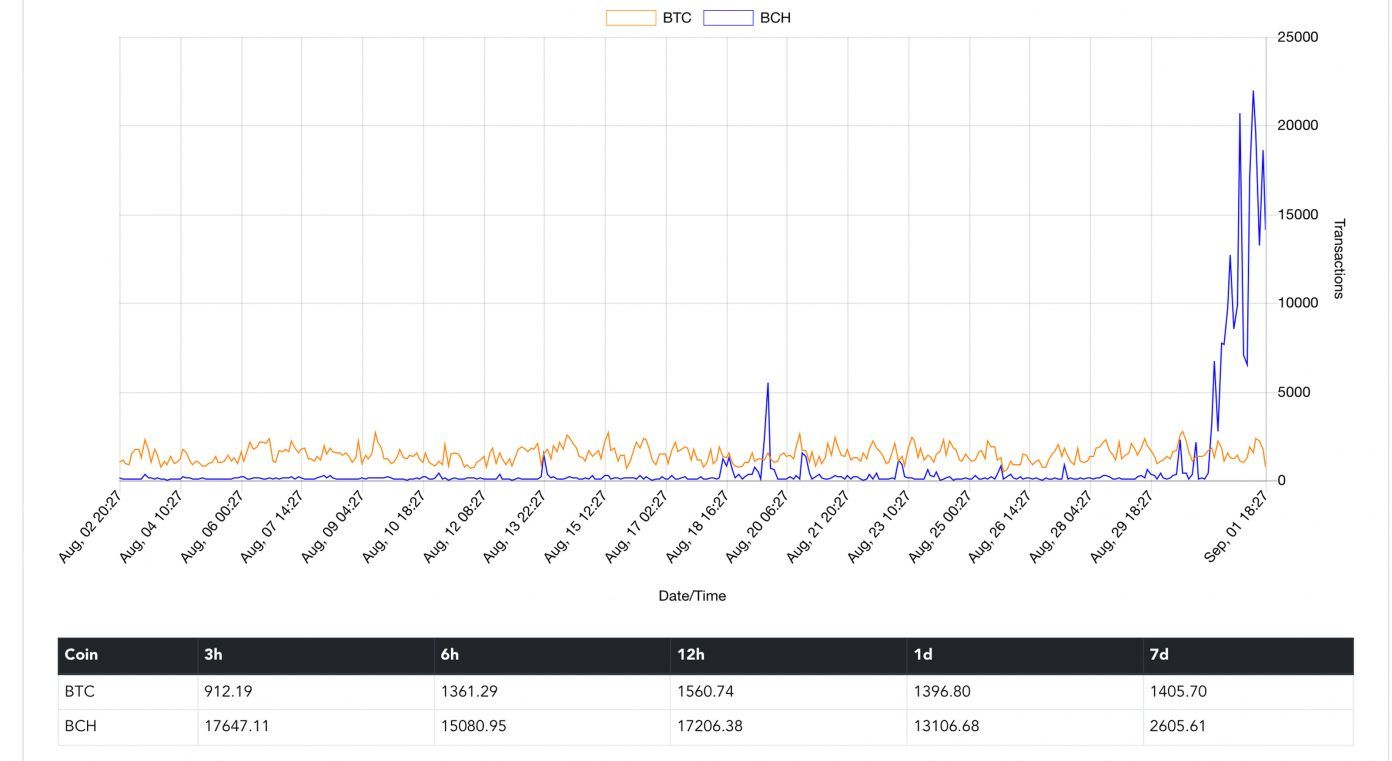 In fact, some data show that when the BCH chain is overloaded, the fees will not increase like the fees on the BTC network. In 2018, the BCH community participated in a stress test, processing 2.4 million transactions on September 1. Throughout the week, the BCH network conducts stress tests day by day, and the transaction volume processed is 2 to 4 times the average daily transaction volume of BTC. In this week's test, some observers pointed out that the network fees actually decreased from $ 0.003 per transaction to $ 0.001. The Zwets article highlights the fact that the main problem with BTC networks is due to artificially limited block sizes. Zwets' article highlights that the root cause of the high transaction cost of using BTC is the artificial limit on the amount of transactions that can be processed, and this limit is lower than the amount of transactions that people want to conduct.

PoW energy consumption is not a problem

Another rumor that was broken on read.cash was "Bitcoin will inevitably be energy inefficient due to PoW " , saying that Bitcoin's workload proved to be a waste of energy and was "meaningless." The rumored article was written by read.cash user Alanone: "The sole purpose of this statement is to put Bitcoin (BTC) and PoW in a bad situation. " He analyzed that the best way to consume energy is to compare it with other energy-consuming ones. The system compares. 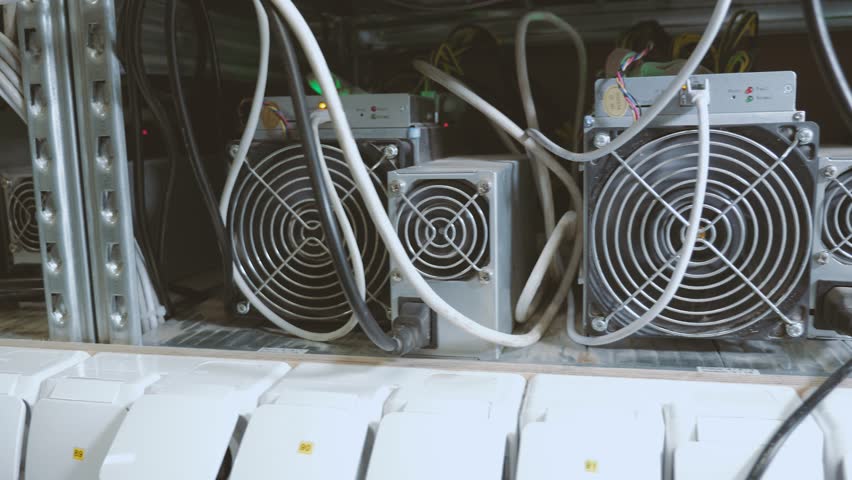 Alanone pointed out in the article: "For example, the energy cost of video game consoles is higher than that of the Bitcoin network, but of course not for security purposes, but for entertainment purposes." He also added at the end of the article:
As we can see, the related issue of Bitcoin (BTC) cost is a non-existent issue for the environment. At the end of this article, an interesting fact indicates that the consumption of idle home devices can provide the Bitcoin network with More than three years of electricity.

BCH supporter Cain wrote down his thoughts, and he believes that the 10-minute confirmation time will make the Bitcoin network difficult to use for daily payments. Kane wrote in the article "Rumors: 10 minutes of confirmation time makes Bitcoin unsuitable as a 'cash' payment method" : " Bitcoin supporters say that Bitcoin is not used to buy coffee. "
One reason some people value this rumor is that they believe that a 10-minute "block time" makes double spending easier. Kane mentioned in a recent video "Using Double Spend Vulnerabilities" that Hayden Otto used the RBF protocol to demonstrate how easy it is to make double payments on the BTC chain. Proponents of BTC cover up the problem with RBF, claiming it is due to a block interval of 10 minutes. They also claim that all zero confirmation transactions are not secure. Kane's article refutes this fallacy, saying that BCH does not have RBF, and BTC supporters do not realize that it is much more difficult to demonstrate a real example of Otto on the BCH network. Click for technical point of view | Is it easy to implement BTC dual payment with RBF protocol?
The Kane article emphasized: "Instead, the [Bitcoin Cash] network follows the 'FirstSeen' principle, that miners use the first transaction they see as a guideline, rather than charging the highest transaction fee. " This means that at BCH Successful double spend on the network is much more difficult. Kane pointed out that because BCH does not have RBF, people who want to pay double must almost remit at the same time. If the transaction is sent only after a few seconds, the chance of double spending will be greatly reduced. Born in Bitcoin, the RBF protocol gives miners more incentive to accept "higher fees" instead of following the original design of Satoshi's "First Seen" rules.

Breaking the view that simplified payment verification is unsafe

The article "Spoiler: SPV is Insecure" , written by Tomz (Thomas Zander, maintainer of Flowee the Hub), breaks the rumor that simplified payment verification is not secure. Tomz believes that despite the good description of this process in the Bitcoin white paper, people still have “misunderstandings about the SPV wallet”, which is a “shame”. "SPV wallets can be verified, but rarely verified … The rumor we hear is that this kind of postponement check is not secure-if you don't check 100% of the transactions, people might somehow take your money "" The developer added. Tomz said that with full nodes, miners verify every transaction and if they try to create a block that costs UTXO twice, the entire network will reject them. SPV wallets are verified through a tracking chain. Since SPV does not check every transaction, they trust the network of complete nodes. 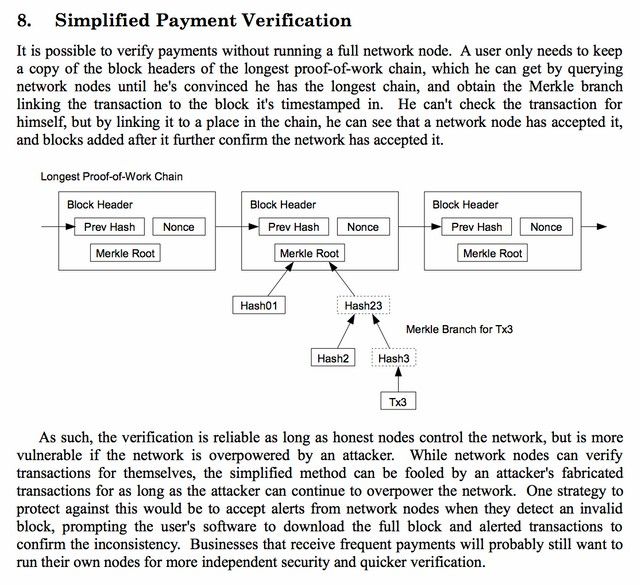 SPV described in Satoshi Nakamoto's Bitcoin white paper.
The Tomz article emphasizes: "SPV wallets don't just trust miners. They believe that every company that observes miners has enough reasons to ensure the health and saneness of the chain … because one of those thousand miners started cheating, but from the ecosystem It is much more important to expel a miner in China than to directly declare that all your money on the chain is lost due to the accompanying decline in value and trust. " Flowee the Hub developers also said:
Therefore, SPV wallet owners trust the ecosystem of coins. Frankly, this is no different from the coins used by any other company or individual. The only difference is the risk-the risk is not that your single payment is stolen, but that the entire chain is destroyed and loses value. This can be easily avoided by running full nodes and running business on them. Just like companies like exchanges and Bitpay. The only risk of an SPV wallet is that there are not enough people to control the miners.

Larger blocks are not equal to smaller nodes

Finally, Mr. Zwets wrote another refutation article, " Breakthrough : Larger Blocks Mean Fewer Complete Nodes" , which refutes the idea that larger blocks will harm the entire number of nodes. Essentially, because these blocks are very large, rumors believers believe that users will choose not to run full nodes because the chain is too large. Zwets used Bitcoin Unlimited's chief scientist Dr. Peter Rizun's speech "Block Propagation and Z Parameters" to justify his point. Basically, Zwets emphasizes that users run full nodes because of low cost and "because they find them useful and care about the network."

Slideshow from Dr. Peter Rizun's speech "Block Propagation and Z Parameters".
The Zwets article insists: "This means that the more people there are, the more complete the network is to nodes. This may sound obvious, but some people seem to think that the only way to get more Bitcoin nodes is to reduce the cost of running Bitcoin. " He also added that if costs increase exponentially, protocol developers should not ignore the rapid decrease in full nodes. One example is the "huge node cost" associated with 200+ MB blocks. "This will cause nodes to crash and force operators to upgrade to more expensive hardware. " Zwets believes that the BSV chain is perfect for this type of "node cost" Examples. Being a large block "broken many BSV block browsers and asked Bitmex to double its node memory."

Overall, the BCH community seems to appreciate editorials aimed at rumors and historical revisionism. The author got BCH suggestions at read.cash, and many of them received feedback on the paper. In addition, because all the rebuttals were caused by an article written by Btcfork entitled " Rolling Through the Roadmap of Bitcoin's Little Blocker Rumors" , the author can also obtain a Token called "Mythbuster" based on SLP. There are many papers to write.

Santa gave bitcoin cash for the best Mythbusting article.
Active contributors may get Mythbuster Token for their efforts, and Btcfork hopes that this work will provide a complete and detailed list of objections to these false claims. Btcfork also wrote a few articles of his own, including "Breakthrough: Large Blocks → 0 Fees → Unlimited Spam" and "Breakthrough: Controversial Hard Fork Does Not Happen. " Finally, to further motivate the author, Btcfork stated that " "Santa" has announced that he will be rewarded with 1 BCH for his favorite post after December 27. Santa will also reward his favorite runner-up 0.666 BCH and third place 0.333 BCH .
Links to articles cited in this article:
"Breakthrough: As the usage increases, BCH costs will also be high"
https://read.cash/@Mr-Zwets/mythbustingbch-fees-would-also-be-high-with-increased-usage-cf081e16
" Rumors : " Bitcoin is bound to be energy inefficient due to PoW "
https://read.cash/@AlanOne/mythbusting-bitcoin-is-necessarily-energy-inefficient-because-of-pow-de8a9853
“ Rumor: 10 minutes of confirmation time makes Bitcoin unsuitable as a 'cash' payment method ''
https://read.cash/@Cain/mythbusting-10-minute-confirmation-time-makes-bitcoin-unsuitable-as-a-cash-method-of-payment-e3e2c202
"Rumor: SPV is not safe"
https://read.cash/@TomZ/mythbusting-spv-is-not-secure-65a469f9
"Breakthrough: Larger Blocks Mean Fewer Complete Nodes"
https://read.cash/@Mr-Zwets/mythbusting-bigger-blocks-means-less-full-nodes-18fdab24
"Roadmap that pierces the rumors of Bitcoin's little blockers"
https://read.cash/@btcfork/a-roadmap-to-busting-small-blocker-myths-about-bitcoin-974e624b
"Today's Topic"

What do you think of the rumour articles written by BCH supporters?

Disclaimer: This article is translated from news.bitcoin.com's official website. If you need to reprint the content, please contact the official WeChat: BitcoinComChina, and mark the original link at the end of the article. Thank you for your support.

"Bitcoin and Friends" series animation is favored by the film company