Bitcoin Optech and ehthub_io founder Anthony Sassano each released a review of the progress made in Bitcoin and Ethereum in 2019 on the same day. Compared to Anthony Sassano, which detailed the progress made by the Ethereum ecosystem in different branch directions such as development, financing, and DeFi, and said that 2019 is "a surprising year for Ethereum construction", Bitcoin Optech cited improvements from a technical perspective. And these improvements are not "revolutionary improvements".

1. Bitcoin Optech releases progress made in Bitcoin in 2019, saying there are no "revolutionary improvements "

Listed below are the single month improvements from January to December.

Steven Roose proposes a standard format for an anonymous transaction reserve certificate that Bitcoin custodians can use to generate evidence that they control a certain amount of Bitcoin.

The Signet protocol allows the creation of a testnet in which all valid new blocks must be signed by a centralized party. Signet will be integrated into Lightning Network client C-Lightning.

Announced by Lightning Lab. An unmanaged solution is provided for users who want to withdraw some funds from the Lightning Network channel to UTXO on the chain without closing the channel.

Proposed by James O'Beirne. This will allow wallets and other software using full nodes to start receiving and sending transactions within minutes after starting a node, without having to wait for hours or days like a newly launched node now.

Proposed by Pierre-Marie Padiou. This is a method that allows lightweight Lightning Network nodes to outsource pathfinding work to heavyweight routing nodes.

Proposed by Pieter Wuille. Taproot can significantly improve user privacy and the fungibility of coins, while also reducing the blockchain space used by multi-signature and contract use cases.

Proposed by Anthony Towns. Functionally similar to SIGHASH_NOINPUT of BIP118, they intentionally do not recognize the UTXO spent, so that the signature can spend any UTXO that its script can perform (for example, using the same public key).

Proposed by Jeremy Rubin. This could enable new technologies to enhance coinjoin-style privacy, support vaults that enhance security, or manage the cost of spenders when transaction rates spike.

Proposed by Bryan Bishop. A way to implement vaults on Bitcoin without using covenants. vault is a term used to describe a script that restricts an attacker from stealing funds even if the user's regular private key is obtained.

Proposed by Adam Gibson. This protocol proposes a new type of non-interactive coinjoin for the existing Bitcoin system.

The vulnerability shows that, in some cases, it seems that every implementation cannot confirm that the channel funds transaction paid the correct script or the correct amount (or both). The Lightning Network specification has been updated to help avoid this problem in the future.

Lightning Network developers made significant progress in October and November, addressing a long-standing problem of ensuring that users can always close their channels without undue delay.

User-friendly improvements. This allows users to use multiple channels to consume or collect money at once, making it possible to use the entire off-chain balance or to obtain the full capacity through a single payment (within certain security restrictions).

2. Review of Ethereum's significant progress in 2019

While Bitcoin Optech released progress on Bitcoin in 2019, Ethhub_io founder Anthony Sassano sent 42 tweets enumerating the progress made by Ethereum in 2019:

1/2019 A surprising year for Ethereum construction.

This is a retrospective theme of the biggest and most important related events that happened in Ethereum in 2019!

-@ getnuo goes live on the mainnet

-@ sec_news SEC Clayton chairman says Ethereum is not a security

–The first eth2 beacon chain testnet was launched from @ethstatus, @prylabs and @sigp_io

-@ defisaver posted on the mainnet

-@ dydx agreement released to the public

-@ ethereum Foundation describes their plans for the next 12 months

-@ chainlink posted on the mainnet

-@realdonaldtrump ( U.S. President Trump ) tweets about cryptocurrencies ( The Block Hub featured a special report on Trump's speech and the response of the crypto cafe and the community on July 12, 2019, interested readers (You can check it out)

-@ ethereum Geth v1.9.0 released with major improvements to the client

-@ ethereum 2.0 researchers and developers participated in an interoperability event and attracted 7 eth2 customers to talk

-@ ethereumJoseph (Joseph Lubin) joins the board of @hyperledger

-@ ensdomainsThe domain name auction ends and all remaining names can be registered at a fixed annual fee. This has led to a surge in the registration and use of ENS names.

-@ rdai_DAO goes live on the mainnet

-@ carlbeek published a blog post detailing how to staking in eth2

-@ jack (Twitter CEO) Announces new Twitter team to deploy cryptocurrency (referring to the establishment of a decentralized standard for social media, The Block Hub reported on December 12 that Jack Dorsey announced the establishment of a team dedicated to this direction, interested Readers can read the issue.)

-@ Fidelity plans to support Ethereum in 2020

-@ Nike is patented, based on Ethereum tokenized shoes

-@ sablierHQ v1 launched on the mainnet

-@ makerdao received $ 27.5 million in funding from: @dragonfly_cap and @paradigm

-@ gitcoin appropriations announced in the fourth round

Just as Bitcoin and Ethereum each released their 2019 review, DTC Capital founder Spencer Noon published his predictions for ETH 2020:

They had previously invested in Layer 1:

Dapp on Ethereum: bullish all the way

Other Dapps on Layer 1: Currently 0 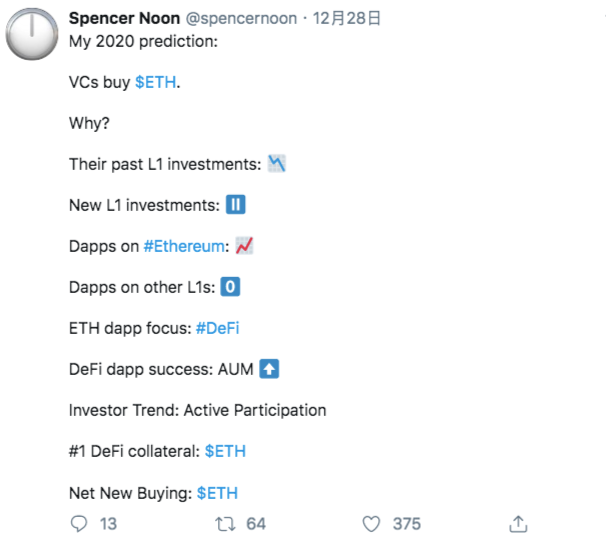 The Block founder Mike Dudas took over the topic and published his 2020 Ethereum prediction:

A lot of activity, memes, signs of life and growth.

The return on ETH itself is disappointing.

I was impressed by the ambitions of the team building on Ethereum.

How do you rate Bitcoin and Ethereum in 2019? Welcome message.

4. Some interesting data for Bitcoin 2019 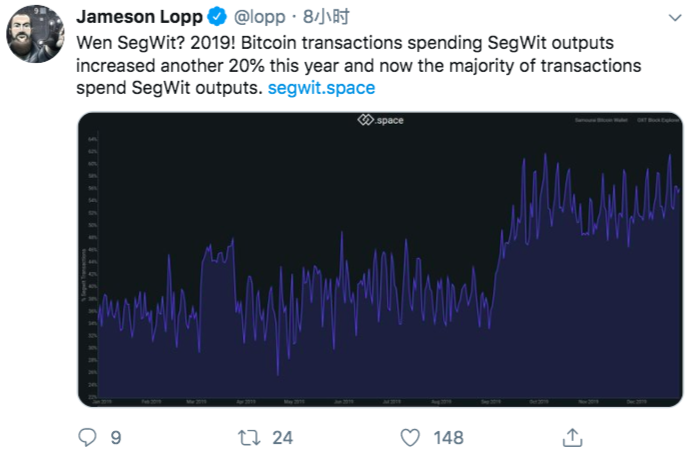 Bitcoin address reuse ( referring to an address being used in multiple Bitcoin transactions ) is a bad privacy practice, which has declined in the second half of 2019 after a 12% increase over the past 18 months. https://oxt.me/charts 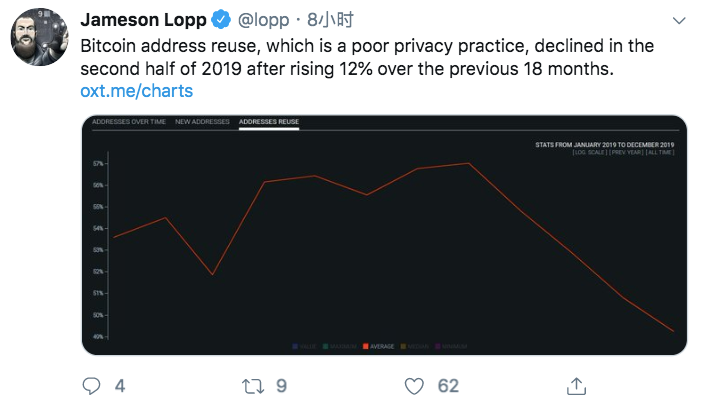 The transaction fees charged by bitcoin miners have fluctuated significantly in 2019, with an average of $ 100,000 per day during peacetime, but reaching $ 2 million per day during busy times . The peak cost in 2019 is still less than 10% of the maximum cost days in 2018. https://blockchain.com/charts/transaction-fees-usd 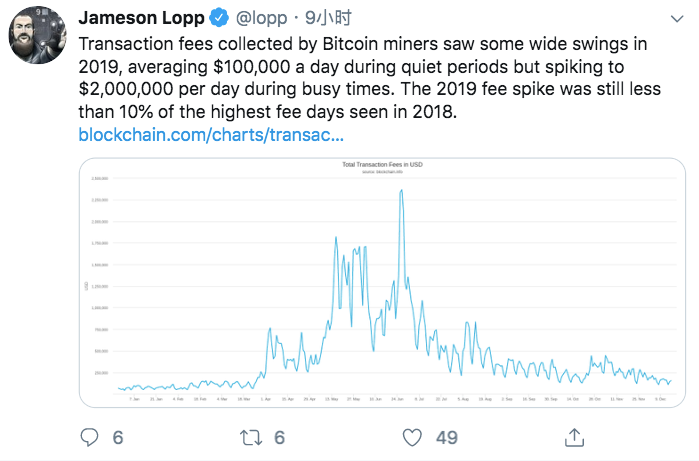 The daily Bitcoin transaction volume on the chain reaches 20 billion U.S. dollars / day , which is 10 times the initial amount in 2019. It is now about two times, roughly reflecting exchange rate changes. https://coinmetrics.io/charts/#assets=btc_log=false_left=TxTfrValUSD_right=PriceUSD_zoom=1546120512000,1577656512000 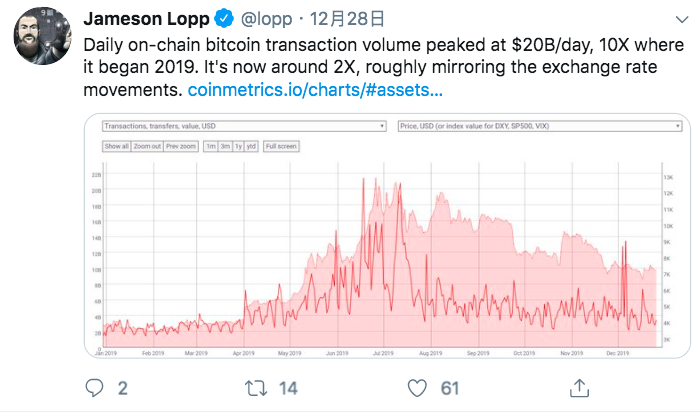 d. Huobi launches fiat-cryptocurrency portal for its Indonesian subsidiary. Huobi Indonesia's services will use Indonesian Rupiah (IDR) and tether (USDT). Indonesian users can deposit Indonesian rupiah through Huobi and convert it into U.S. dollars to trade more than 250 cryptocurrencies supported by their global platform.

e. Bloomberg reported that Craig Wright, a controversial figure who had been ordered by a judge to surrender his 3 billion bitcoin holdings, said he may not be able to enforce the order in the near future. 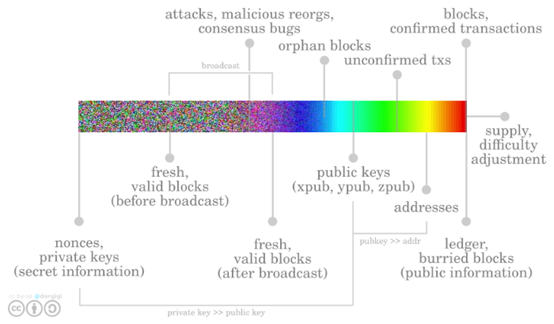 Bitcoin's eternal battle: fighting entropy, rising on the borders of order and chaos