As the freezing point sentiment continued to spread at the end of 2018, Bitcoin fell to a bottom of $ 3,400 in February this year, and Ethereum returned to the starting point of $ 80, and the market was almost desperate.

I never thought of a thunderstorm on the ground. In the bleak start of 2019, we took the "three fires" as the main line and stepped out of a magnificent special year.

1. First, the 1E0 launched by some head digital asset financial platforms ignited the first fire in 2019, and Xiaoyang came suddenly;

3. Finally, the top- level high-level warm current in October was the third fire of the year, but went for two months and finally returned to the original point, which caught everyone off guard.

Looking back now, the "three fires" running through 2019 are like stimulants. Without fundamental warming, the stimulus is futile but it is doomed to return to heaven.

But the market is like an iceberg. The part that is visible and exposed from the sea is often less than one-tenth. In 2019, when there are many variables, the ups and downs have actually laid the groundwork for 2020.

So, taking Bitcoin and Ethereum as the two most representative head projects of the industry as a cut, reviewing its major events in 2019, what kind of taste can we smell from them?

I. The prediction of the Bitcoin ETF that failed to escape the curse at the end of 2018 stated that "2019 will be the year in which the Bitcoin ETF will pass." However, with the voluntary withdrawal of an ETF application filed in early January and a rejection by the SEC, the most promising sprints for 2019 were all broken. At the same time, according to Cointelegraph reported on December 23, the SEC has also postponed a decision on the "Bitcoin and U.S. Treasury Digital Asset Financial Platform Trading Fund (ETF)" proposal submitted by the Wilshire Phoenix Fund after the update, thus completely closing the hope for this year. door.

Although the Bitcoin ETF failed to break the curse and postponed to become "the most anticipated event in 2020", the statement from the former chairman of the SEC "We are closer to the Bitcoin ETF, but there is still much work to do" also shows that it is true At the "last mile".

The first was the explosion of the "torch relay", which did an unexpected ad for it. On January 19, 2019, Lightning Network's "torch relay" was cold-started on Twitter, starting from 100,000 Satoshi, and randomly giving a responder who left a message under the post through the Lightning Network to relay, each transfer increasing by 100,000 Satoshi .

Until the end of the "Lightning Torch" transmission, it lasted 79 days and experienced 284 transmissions. A total of 273 people participated in it, spanning 56 countries, and a total of 6.86 Bitcoins were traded. Each participant will virtually become the Lightning Network. The promotion ambassador has greatly promoted the awareness improvement and popularity of Lightning Network. 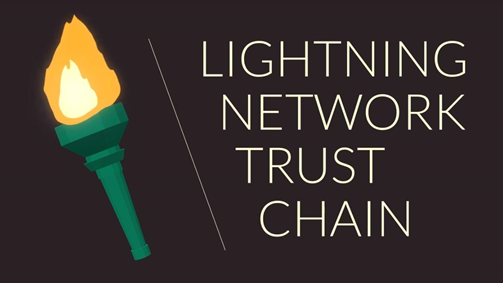 At the same time, Bitfinex chose to partner with crypto gift card provider Bitrefill. Now measured by indicators such as the number of nodes, the number of channels, and network capacity, the Lightning Network has grown several times in the past year.

The "Torch Relay" event in 2019, coupled with the launch of Bitfinex's first mainstream platform, the Starfire of the Lightning Network, has gradually become the original.

3. Bakkt futures started slowly, and institutional derivatives layout Bakkt futures, which was highly anticipated by the market, went live on September 23 this year, but the start was bleak, and the transaction volume was almost negligible. Many people were shocked:

But after two months of silence, the "super bull engine" of Bakkt seems to be slowly starting, and the transaction volume continues to break records: Within the first 24 hours of the opening of Bakkt, 71 Bitcoin futures contracts (71 BTC) were traded The first nine trading days were also quite deserted, with only 865 contracts changing hands. At the same time, options for Bakkt and CME are on the way:

On December 12, ICE of the United States announced the first regulated Bitcoin option to complete the transaction between Galaxy Digital Trading and XBTO;

CME also announced the details of launching the relevant contracts on January 13, 2020;

4. The second largest bitcoin mining machine manufacturer, Jia Nan Yunzhi, landed on Nasdaq. On November 21, in the expectation of everyone, Jia Nan Technology, the second largest bitcoin mining machine in the world, successfully landed in the US stock market. Duck, whose stock code is CAN, issued 10 million ADSs, and US stocks were priced at $ 9, winning the title of "First Share in the Global Mining Circle". Obtaining financing is capital's recognition of the direction; successful listing is capital's recognition of the industry.
Jia Nan Yunzhi, who broke the social circle overnight, ignited a carnival in the blockchain industry and also successfully set a benchmark for the blockchain industry to enter the mainstream capital market.

Except for the two major digital asset financial platforms of backdoor Hong Kong stocks, in 2020, a number of companies in the industry are expected to follow suit and land in the capital market one after another, which will also become a major focus of the industry in 2020.

2019 is a difficult year for Ethereum.In addition to the highly anticipated key upgrade, ETH has also experienced a "price roller coaster":

Taking the middle of the year as a boundary, ETH first fluctuated upward from $ 100.90 in January until the year's high of $ 366.80 in June. It then turned around and fell for a while. Now it is approaching the beginning of the year and pessimism continues to spread.

I. Repeated bouncing, the difficult march of Ethereum 2.0

In February, Ethereum carried out several delayed Constantinople upgrades, and the second part of the "Metropolis" was successfully implemented;

On December 8th, the Ethereum Istanbul hard fork upgrade was successfully completed, and brought 6 improvement proposals, and the third part of the "Metropolis" was successfully implemented;

On December 23, V God released a heavy new proposal to make the ETH 1.0 chain as shard 0, and migrate to ETH 2.0 faster;

The Istanbul hard fork is the first of two major network upgrades planned over the next six months, and these two upgrades will eventually bring Ethereum to 2.0 (also known as the quiet phase). It seems that after a difficult march in 2019, Ethereum is only one step away from "quietness".

However, it seems that Ethereum 2.0 is close at hand. In fact, there are still many difficulties that need to be overcome one by one. According to the current progress, 2020 may be the key year for the ETH 2.0 landing. For the repeatedly delayed progress and the unremitting progress As far as chase is concerned, less time is left for it.

Second, ETH officially establishes and leads the direction of DeFi Just as the public chain's skepticism is on the rise, Ethereum, the leader of the public chain, changed from a "world computer" in 2019 and redefined itself with a "DeFi settlement layer".

At the Devcon 5 Ethereum Conference from October 8th to 11th, ETH2.0, DeFi, and DAO were taken as the three main directions for the future development of the Ethereum ecosystem, and the consensus reached by the participants. It is quite appropriate that as of November, the number of ETH locked in the decentralized financial application on Ethereum has reached a record high of 2.7 million. Behind it is the current state of development of the DeFi ecosystem, represented by MarkDAO and Compound.

DeFi has become a moat for the next period of Ethereum, and 2019 can be called the Ethereum DeFi year.

Third, the development ecosystem of Ethereum continues to lead, and continues to grow. Even with the most talk, Ethereum is still the deserved first choice for public chain development. In addition to the core protocol development, Ethereum has more than 200 active developers on average every month. Developed the total code, and the number of developers has been riding in the dust, maintaining a strong and continuous growth momentum.

According to Stateofthedapps data, as of December 26, Ethereum is far ahead of other competitors in terms of hard indicators such as the number of DApps, activity, and contract deployment.

A report released by Electric Capital in mid-2019 also showed that the developer community of Ethereum is four times larger than the ecosystem of any other cryptocurrency project. At the same time, there are continuous actions in the corresponding developer activities:

In a nutshell, in 2019, Ethereum will struggle to achieve the beautiful vision described by 2.0 through network upgrades, and DeFi will also introduce hundreds of millions of dollars into the Ethereum ecosystem.

As fields such as DeFi and DAO grow, the Ethereum developer community continues to expand. Although each step is difficult, it has passed through the dark moments.

For investors desperate in 2018 and eager to find solace in the market, 2019 is undoubtedly just a bad year. But if we carefully review the events of 2019, we will find that many grass snake gray lines have actually been buried secretly.

Regardless of the gradual improvement of infrastructure, or the subtle changes in technology upgrades and mainstream recognition, we have reserved worthy seeds for 2020.

2019 is undoubtedly the turning point in the history of the industry's most memorable book, whether it is the environmental changes at the macro level under the agitation of Libra, or the death of head projects represented by Bitcoin and Ethereum, The next 2020 has accumulated enough variables to look forward to.

Fosun co-founder Liang Xinjun put it bluntly in his latest speech: " 2020 will be a turning point in the development of blockchain. " Let us look forward to the 2020 of Bitcoin and Ethereum together, and look forward to a new year of hope for the entire industry.

What do you think of the development path of Bitcoin and Ethereum in 2019? why? Welcome to share your views in the message area.

21st Century Business Herald: Supply chain finance has become the easiest direction for blockchain to break through in the financial sector