Foreword: With the large-capacity mining machines collectively entering the market, the first-generation King Ant mining machine S9 will withdraw from the historical stage. Looking back at the history, the author believes that the Chengdu team has achieved cross-generation advantages over competitors through dynamic triggers, which is also the main reason for the success of S9. The design of the S9 is a miracle of the Bitcoin mining machine, and it has become the most produced mining machine in the Bitcoin mining machine. It has a life cycle of more than three years and is called the machine emperor. The opinion of the article is the personal opinion of the author and does not represent Wu's position on the blockchain. 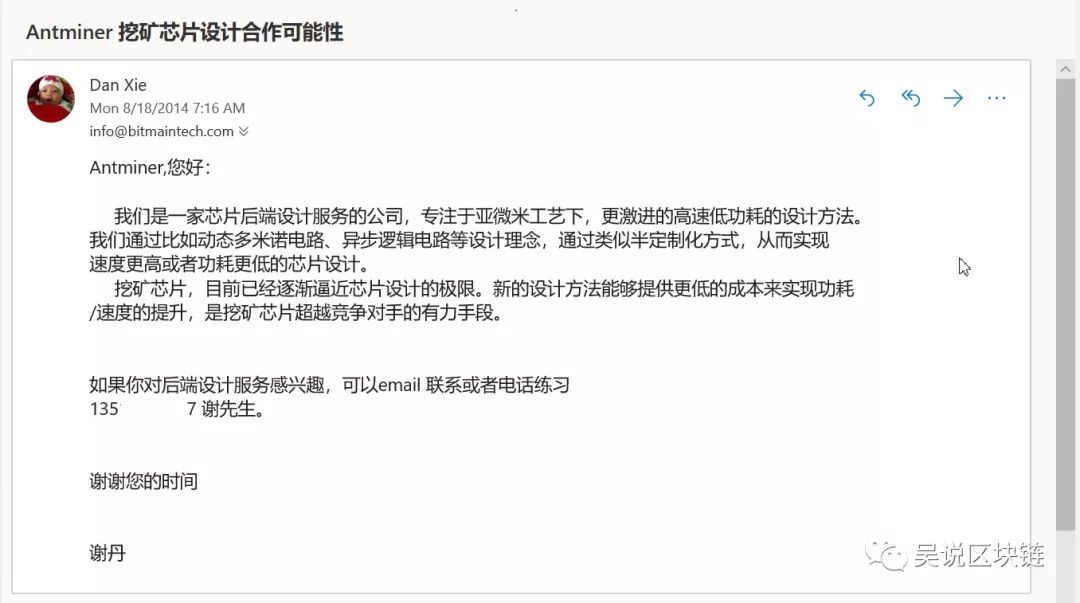 At the time, I wrote emails to many integrated circuit design companies, and Bitmain was the fastest responder. Later, I learned that this email address was used by Wu Jihan and was always used by Bitmain. At that time, Bitmain was also looking for a solution to improve the competitiveness of the chip. So Wu Jihan forwarded this email to President Zhanke's regiment. President Zhan passed through Chengdu and met me in September. President Zhan and I have interviewed twice, and everyone talked well. Mr. Zhan always felt that this project was long, risky, and there were concerns about intellectual property rights. I suggested that I dissolve the company and lead the team to join Bitmain.

In October 2014, I officially joined Bitmain with a small team of two people and became a fully customized department of Bitmain. The original direction was domino logic in the email.

Domino logic is a relatively mature dynamic logic structure, and its main form is this: 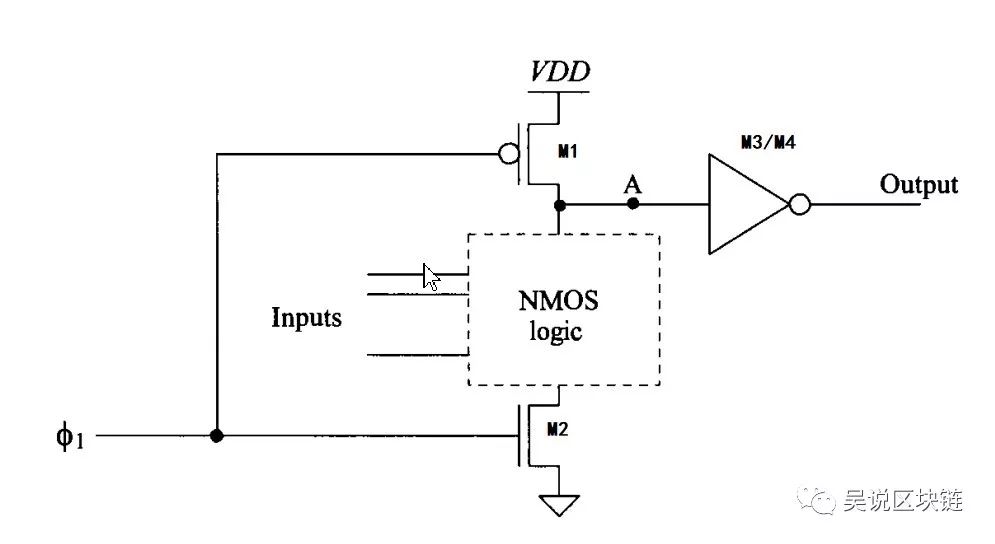 When we submitted our conclusion in January 2015, we basically confirmed that domino logic is not suitable for mining machine chips. Because Bitcoin miner chips are purely parallel, speed is not that important. The biggest cost of a miner is the electricity bill, so power consumption is the most important. When we evaluated the rule of thumb for area and power consumption, the weight of power consumption was more than 3 times the area and speed.

The failure of our Domino logic attempt did not hurt our exploration, because we found a standard unit suitable for dynamic logic with a large number of pipes. One obvious example of this standard unit is the flip-flop . So we went back to the beginning, with dynamic triggers as the goal.

At the beginning of the integrated circuit, in the 1970s of the last century, because the cost of each transistor was high, the flip-flops at that time were dynamic, whether it was domino flip-flop, C2MOS edge-triggered flip-flop, or TSPC positive-edge Flip-flop, etc., are the products of the time. We found a treasure trove from it.

For example, a TSPC positive-edge Flip-flop has the following logic: Still counting as two gates according to our clock gate, this flip-flop is equivalent to 4 * 2 + 7 = 15 gates in total.

The structure of our most commonly used static triggers is this: Adding clk's inverter, we add this together to be 8 * 2 + 12 +4 = 32 gate equivalents. Static logic triggers consume more than twice the number of equivalent tubes as dynamic logic.

After we have identified the triggers that use dynamic logic, the next step is to integrate into our design process. Finally, we added a time constraint to the functional description of the trigger of the static logic to prevent the leakage current in the dynamic logic from causing leakage at the dynamic capacitor point. And in timing and power consumption library, some parameters of the static trigger are applied. To put it simply, we added a frame to the dynamic logic to make it appear to the front-end designers as a normal static trigger. There is no difference in front-end design and synthesis.

After completing the library of dynamic flip-flops, we are equivalent to a new flip-flop with half the area and half the power consumption. Because bitcoin needs to be calculated continuously, static triggers need to hold data for longer periods of time. After we complete the dynamic trigger, Bitcoin's distributed operation and fully pipelined logic are particularly suitable for dynamic triggers. For the pipeline, its structure looks like this:

We can directly change to:

In the digital currency mining industry that requires almost no software environment, a product is only half the cost of competitors. This is a very big competitive advantage, which means that you can carry out a price war advantage as you want. Because you do n’t make money selling your opponents, and Bitmain has a gross profit margin of more than 50%. It is by virtue of the secret weapon of dynamic logic and the success of S7 and S9 sales that Bitmain has become a dominant player (with a share of more than 70%) from a dispute of less than 20% in market share.

A direct phenomenon of the rise of Bitmain is the withdrawal of foreign bitcoin chip companies. In 2014 and 2015, the high-profile KNC, bitfury, Spondoolies-Tech, and 21 Inc. all quickly declared bankruptcy or exited the mining chip market.

With the departure of some employees of Bitmain, the technology of dynamic trigger has gradually spread to other domestic chip developers, but this technology is basically confined in China. In 2017, Japan's GMO also tried to enter this field at 12nm and 7nm. From the company's propaganda, they still used the structure of static triggers, coupled with the bear market cycle in 2018, they lost money after one year Withdrawal from this market is to be expected.