In the blockchain industry, Shenzhen is the city of choice for many companies. But in the currency circle, Shenzhen has another notoriety-the "capital capital."

Here, a set of currency circle fund tray system can be bought for only a few thousand yuan. From development, operation, promotion to money laundering, the corresponding outsourcers can be found in the fund.

However, at the end of 2019, Shenzhen launched an unprecedented blow to the fund. Here the money plate finally ushered in a dead end.

Traders fled overseas overnight, and some people chose to wash their hands in gold basins and even switched to a beauty salon.

Shenzhen is removing its label of "capital capital". The blockchain industry is also constantly purifying and heading for a new starting point.

A rectification operation came quietly in the Shenzhen currency circle.

Shenzhen Digital Singularity Technology Co., Ltd. (the main operating entity of the currency watch trading platform), the wholly-owned subsidiary of the New Third Board listed company Internet Online (the operator of RHY overseas mines), and six currency-related companies all appeared in the interview list. They are either suspected of conducting token financing activities or of virtual currency exchanges.

"Interviews are required for all companies engaged in virtual currency, but this time there were only about 8." Shenzhen Local Financial Supervision Bureau staff told Peng Mei News.

This means that in the face of chaos in the currency circle, Shenzhen supervision is taking the initiative. 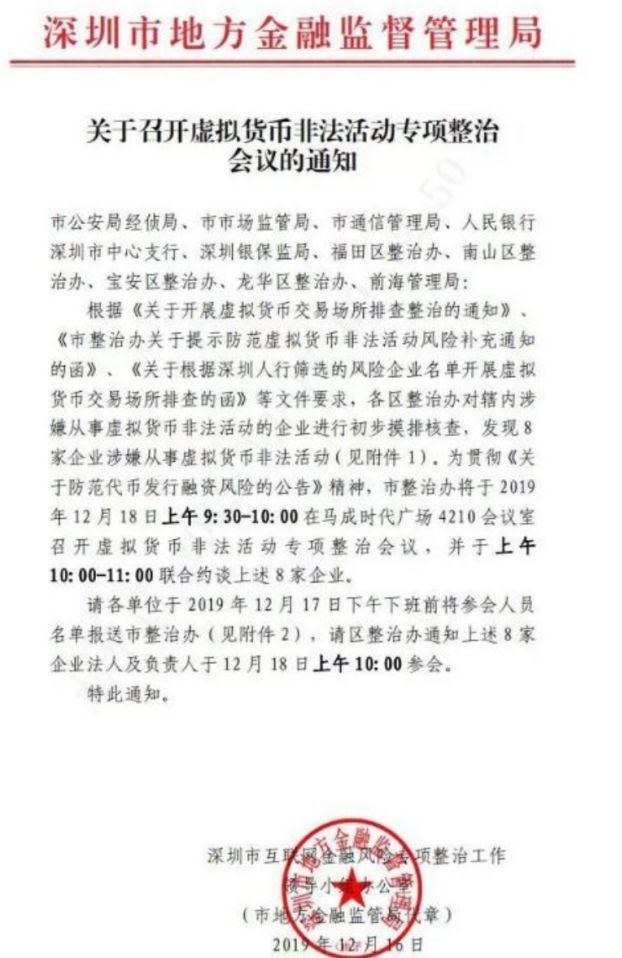 "These eight so-called 'coin-related companies' are well-known in the Shenzhen currency circle. But after all, they are operating on the ground. In contrast, the underground currency circle is the subject of severe supervision." Shenzhen senior veteran player Pan Zhao According to a blockchain, many people who have done cash in Shenzhen have recently ran away.

In the past, many funds will be commanded remotely in Shenzhen to harvest the country. In the currency circle, this is already an open secret.

Take "Silver Coin" as an example, this fund is playing the banner of block chain and physical Tibetan tea guarantee. It was issued in September 2016 and the issuer is Shenzhen Puyin Blockchain Group Co., Ltd. By manipulating the price of the currency, the company harvested more than 3,000 victims.

Take "Xi Bao Coin" as an example. Its predecessor was an all-encompassing fund dish under the guise of an agricultural product e-commerce platform. The referee documents showed that its weekly profit was as high as 18%, and the first-level agent could also get 6% rebate by pulling the head. In the Shenzhen circle, this model is called "product plate" and "point plate".

In the later period, the "All the Way Happy" trader abandoned the game of "product disk" and issued "Xibao Coin", requiring investors to subscribe directly. The platform even found someone to develop an exchange called "Shubao International" for trading Xibao coins.

The issued amount of Xibao coins is 1 billion, but the number of Xibao coins in circulation is only tens of millions. Therefore, the platform can freely manipulate the currency price for profit.

In fact, the relevant departments of Shenzhen have not stopped the crackdown on the fund.

In May 2018, the Shenzhen police reported that six suspects involved in general silver coins were arrested and the funds involved in the case were 307 million yuan. This is the first money circle fund project in Shenzhen history that has been cleared by police.

In May 2019, the Shenzhen Nanshan Court concluded the Xibao Coin case, and the main offender Lu was sentenced to 6 years in prison for organizing and leading a pyramid scheme.

Since then, the Shenzhen police have successively arrested multiple fund-trading gangs, and some of them have been sentenced.

Judicial data platform OpenLaw data shows that there are 323 criminal judgments with the keyword of "Shenzhen + virtual currency". Among them, 196 judgments were charged with fund-raising fraud, illegally absorbing public deposits or pyramid schemes, all of which are cases of fund transactions Common charges.

Long before the concept of the blockchain appeared, Shenzhen was the gathering place for many capital projects.

Lao Zhao is a regional agent of a direct selling agency in Shenzhen, and has witnessed the rise and fall of the Shenzhen currency circle's capital disk.

In his view, Shenzhen has a unique advantage in the fund industry. It is backed by Hong Kong, and it is also a special economic zone. It has always been the "tall" representative of the people of the Mainland.

"Agents from small cities came to Shenzhen to inspect the project. When they saw the office buildings and luxurious hotels in Shenzhen's headquarters, they felt that this plate was reliable and could last for a long time," said Lao Zhao.

But in the early years, Shenzhen's fund disk models were all points, product, and mutual aid. By 2018, the blockchain is on fire, and the coin circle and the circle have gradually begun to converge.

"Some currencies now come out when the ICO fired in 2017. By 2019, the team did not realize one of the cowhide leather, what should I do? It's very simple, please go to Shenzhen to ask a circle model to design a 'model' Now. "Old Zhao teased.

The so-called "model" is the introduction of digital currency into the "static income" and "dynamic income" that are common in capital funds, and attract leeks to the market.

In the process, the influence of the currency circle and the circle on each other is getting deeper and deeper.

"In the past, friends in the circle all referred to each other as Brother X, Sister X, and X. Since the blockchain was established, many people have given themselves English names, and all speeches in English were in English." Lao Zhao said .

These English names are very exaggerated, such as Caesar. "There is another person who calls himself Lucifer (the name of a fallen angel in Western legends)," said Lao Zhao.

In addition, the traditional style of the circle is that the stage is full of big red back plates and golden fonts, and after confluence with the currency circle, their stage color is changed to dark blue with a stronger sense of technology.

The most funny is a little famous trader, after making the money circle funds disk, equipped himself with a pair of black frame glasses. "The glasses have only one frame, which is purely for posing." Lao Zhao said.

In his opinion, a classic line from Ge You in the movie "Let the Bullets Fly" can also be copied to the capital disk industry:

"For those of us who are doing direct sales, we have a group of agents, and there are retail investors under the agents. We are gentry, we first invest money to help them make money." Lao Zhao said.

It is worth mentioning that in Shenzhen, as long as you have money, you can quickly find the entire chain of the capital disk industry. From the customization and development of the fund tray system, to traders, promotion teams, agents, and other peripheral facilities such as money laundering, there is no shortage.

Here, to customize a set of money tray system, the minimum cost is only a few thousand yuan.

"Here, the price for electronic pet platforms is 5,000 and the PlusToken model is set at 50,000 to support legal currency deposits. For each additional currency, the price is increased by 3,000." Xiaohao, who is engaged in outsourcing development of capital disks in Shenzhen, told a blockchain .

In August 2019, the representative of the pet money disk "Huaden Block Dog" crashed. Lao Zhao revealed that the operator of this platform is in Shenzhen.

03 From prosperity to decline

Funding is obviously not a long-term business. Long before the regulatory intervention was fully involved, the Shenzhen circle had begun to decline.

"The leeks are obviously not enough." Lao Zhao said, "Some leeks have been cut too hard and have been out. Some leeks have learned so much that they can even predict the rhythm of the trader and counter-cut the project party."

What makes him even more angry is that some fund developers have completely "lost rules", and even "gentlemen" like him must reap. Even so, making ends meet is still the norm for many funds.

"If you want to attract investors, you need to rent an office in a luxury office building and hire a lot of employees," explained Lao Zhao. "You also have to entertain in five-star hotels. Some hospitality activities cost 200,000 to 300,000 at a time."

He said that the operating cost of many funds every month would require hundreds of thousands. "The leek is getting less and less. As soon as the boss calculates it, he finds that not only he can't make money, but he also has to make money. In the past six months, some funds have gone online for a month, and that's why."

At the end of 2019, under the blow of supervision, Shenzhen's capital market ushered in a disaster.

From product, point, and currency funds, many players in the circle have experienced multiple upgrades in the Shenzhen capital industry, but at this moment, they still choose to leave.

According to Lao Zhao, in the past few months, many people in Shenzhen have traveled to Southeast Asian countries such as Cambodia, and some people have chosen to return to the physical industry. He has a friend who is working as a cashier and has switched to a beauty salon.

It is gratifying that there are still many companies in Shenzhen that really focus on how technology is transforming finance. In Shenzhen's recent capital rectification, Shenzhen's local science and technology forces have also begun to intervene.

At present, the Lingzhi system has been involved in the crackdown of the fund by the Shenzhen Finance Office and the Guangdong Finance Bureau.

In July 2019, the Party Central Committee and the State Council issued documents supporting the construction of a socialist pilot zone in Shenzhen. "Developing Digital Currency Research" was written into the file.

Obviously, the funds for cutting leeks are incompatible with the positioning of the socialist advanced demonstration zone, and they are completely different from the "development of digital currency research."

Shenzhen has already begun to remove the label of "capital capital", while vigorously creating a blockchain innovation highland.

Everything has just begun.