Recently, the research on the autonomous and controllable system of blockchain has become a hotspot for many institutions. Consensus Wang Maolu published a paper in "Information Security and Communication Secrecy" to study the state secret substitution of blockchain.

The focus of the government affairs chain serving a wide range of domestic government affairs areas is to ensure support for the business secret series of algorithms at the security level. At present, the hash algorithm is widely used in the proof of work of the blockchain. Each innovative blockchain project has its own different implementation, which is a relatively core and basic technology in the blockchain. The main asymmetric encryption algorithm in the mainstream public chain mainly adopts the RSA algorithm, and the following mainly demonstrates the confidentiality alternative of these two algorithms.

In order to ensure the security of commercial passwords, the Commercial Password Management Office of the State Password Administration has formulated a series of password standards, including SM1 (SCB2), SM2, SM3, SM4, SM7, SM9, Zuchong's Password Algorithm (ZUC), and so on. Among them, SM1, SM4, SM7, and Zu Chong's password (ZUC) are symmetric algorithms; SM2, SM9 are asymmetric algorithms; SM3 is a hash algorithm. At present, these algorithms have been widely used in various fields, and it is expected that one day, blockchain applications using commercial algorithms will appear. The SM1 and SM7 algorithms are not public. When calling this algorithm, it needs to be called through the interface of the encryption chip.

Blockchain can be used to register and issue digital assets, points, etc., and transfer, pay and trade in a point-to-point manner. Due to the high network latency in a point-to-point network, the order of transactions observed by each node cannot be exactly the same. Therefore, the blockchain system needs to design a mechanism to agree on the sequence of transactions that occur in a similar time. This algorithm that reaches a consensus on the sequence of transactions within a time window is called a "consensus mechanism".

Existing consensus mechanisms include Pow, Pos, and DPos, among which Pow is the most secure public chain consensus algorithm. The existing Bitcoin uses the Pow consensus algorithm chip. In the Bitcoin system, miners must perform and complete the proof of work process in order to mine new Blocks (data blocks). The miner calculates the SHA256 value (a type of HASH value) of the header information of each data block. If it is smaller than the SHA256 value of the previous data block, the P2P network will accept the new data block. At present, Bitcoin has attracted most of the world's computing power. Other blockchain applications that use the Pow consensus mechanism are difficult to obtain the same computing power to ensure security.

Based on the investigation of various domestic and international consensus mechanisms and consensus algorithm chips, the SM3 consensus algorithm is studied. The algorithm flow is shown in Figure 1. The SM3 password digest algorithm is a Chinese commercial password hash algorithm standard published by the National Password Administration's Commercial Password Management Office in 2010. The SM3 algorithm is an improved algorithm based on SHA256. It uses the MerkleDamgard structure. The message packet length is 512 bits and the digest value length. It is 256 bits. This algorithm generates a 256-bit hash value for a message with an input length less than 2 to the power of 64 to the power of 64, using XOR, modulo, modulo addition, shift, AND, OR, NOT operation. , Consisting of padding, iterative processes, message expansion and compression functions. The compression function of the SM3 cryptographic hash algorithm has a similar structure to the compression function of SHA256, but the structure of the compression function of the SM3 algorithm and the design of the message expansion process are more complicated. Each round of the compression function uses 2 message words. Message expansion Each round of the process uses 5 message words, etc. Based on the SM3 consensus algorithm chip to ensure higher security, at the same time, because the SM3 algorithm is similar to the SHA256 algorithm structure, it can use a unified processing model with the HASH256 chip, but it is designed separately for each computing unit to effectively save resources . The SM3 cryptographic hash (hash, hash) algorithm is suitable for digital signature and verification in commercial cryptographic applications, the generation and verification of message authentication codes, and the generation of random numbers, which can meet the security requirements of various cryptographic applications. Based on the investigation of domestic and foreign blockchain technology and blockchain transaction methods, the research determined a multi-signature transaction method based on SM2 in the business secret system. The SM2 algorithm was released on December 17, 2010 by the State Cryptographic Administration, and is called an elliptic curve algorithm. The algorithm encryption and decryption process is shown in Figure 2. The security of the SM2 algorithm is based on the mathematical problem "discrete logarithm problem". When using the SM2 algorithm for digital signatures, the required key length is shorter than the previous RSA. The multi-signature transaction method based on the SM2 algorithm not only makes it easier for users and trading platforms to memorize and store keys, accelerates the verification rate, and ensures that transactions are not affected by one party, that is, the rights of buyers and sellers are guaranteed, and the platform cannot misappropriate transaction funds. , And the outside can not compromise the economic security of the public chain by attacking the server. The government chain uses the SM2 elliptic curve algorithm to generate the public and private key pairs of the blockchain and verify the signature, making its own computational complexity completely exponential, and compared with the RSA used in the traditional blockchain, the same Under the security performance, the required number of public keys is less, and the speed of key generation and encryption and decryption is more than 100 times faster than that of the RSA algorithm. The SM2 algorithm is superior to the RSA algorithm in many respects (RSA developed early and is widely used, and SM2 is also a natural leader). Table 1 shows the security comparison with RSA. 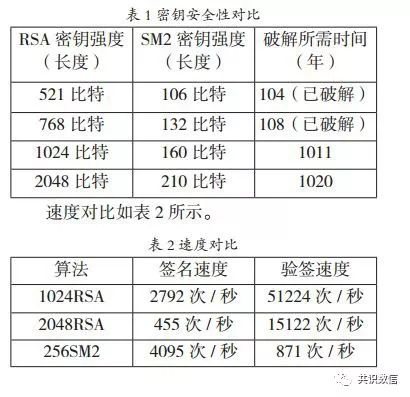 The elliptic curve asymmetric encryption algorithm used for the public-private key pair on the chain is SM2, and the hash hash algorithm used in the distributed ledger bookkeeping of the blockchain is SM3. Through the encryption method of China's independent intellectual property rights, the effective guarantee of data security on the chain has been achieved. Therefore, the government chain can be used as a built-in security guarantee mechanism of the data exchange system and an important function of a third-party security authentication platform. While providing encryption guarantee for data information exchange and transmission, it also provides authentication, authorization, anti-tampering and traceability to the data itself. Contour security guarantee. Secret system-based government affairs chain integration and sharing exchange applications provide tag on-chain. Through the storage and preservation of data tags, the total data exchange, current running status, transmission line status, data exchange process status, and exchange of each node can be maintained. Service status, etc. can be effectively monitored and traced, and specific data exchange packets can be queried and counted according to items such as in / out, destination / source, and amount of data within a specified time; data status (such as waiting for exchange) , Being exchanged, exchange completed, receipt received, processing interrupted, etc.), tracking the status of a certain specified data.

Dry goods: teach you to…

Japan Financial Services Agency: The number of enquiries on encrypted assets fell to 494 in the second quarter of 2019

White Paper on the Real Estate Industry: Core Elements such as Blockchain Reconstruct the Full Value Chain of Real Estate