On December 31, 2019, Sun Yuchen, the founder of TRON, completed the last acquisition during the year, and the decentralized live streaming platform DLive officially joined the BitTorrent ecosystem and began to migrate to Tron. DLive, which launched in 2018 with more than 5 million monthly users, claimed that he "would bring value to the entire world." Just half a month ago, social platform celebrity Sun Yuchen turned to Sina Weibo, and his millions of fans' accounts were suddenly banned. After communicating with the authorities, he resigned to Twitter.

On December 25, 2019, Alex Saunders, the founder of Nuggets News, was not in the mood to celebrate Christmas. On this day, he discovered that YouTube deleted more than 50 videos from his personal channel and marked them as "harmful or dangerous content." In order to prevent more videos from being taken down, Alex Saunders immediately made the remaining videos private. And started to contact the YouTube official, but this did not get a response, but things continue to worsen. As more videos were deleted, Alex Saunders was somewhat helpless. He tweeted that he had just hired a new employee and his wife and children also needed to make money to support the family. There were no complaints when the videos were continuously deleted.

Subject to the regulatory environment, the crypto world's practitioners who have not been "rectified" have had a rough time in 2019. On the one hand, I am distressed by the "stigma" and the "mouse shit" disturbed the atmosphere of the profession, on the other hand, I have to worry about being expelled and removed from the giant platform, losing the final publicity position.

The suspension of hundreds of videos caused a stir in the circle, and it was even more difficult for bloggers to accept that not only were their works completely deleted, they also received a severely worded warning letter from YouTube, saying that if they would By posting similar content, their accounts will be permanently banned, and most deleted videos will be marked as "harmful or dangerous" like Nuggets News.

With the expansion of public opinion and the hot discussion of Twitter topics, YouTube, which was difficult to stand up to consensus, finally responded.

"The videos in this incident were deleted by mistake. All videos will be restored without any penalty on the deleted channel."

On December 27, Alex Saunders said that all 250 videos he had deleted were fully recovered, but no official staff contacted him to explain why. Although only a false alarm, there is no doubt that the crisis of trust has become more prominent. 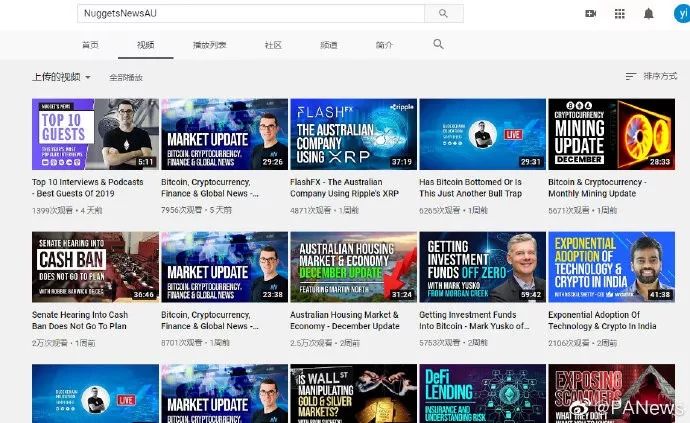 As a wholly-owned subsidiary acquired by Google, YouTube represents Google's attitude towards the industry to a certain extent. Ethereum founder Vitalik also said that behind the YouTube event, there may be a shadow of Google.

Coincidentally, on December 27, Metamask, a cryptocurrency asset wallet, suddenly tweeted that Google has removed its Android version of the client in the Google play store, claiming that it violates Google ’s financial services policy " It is forbidden to apply the policy of cryptocurrency mining on devices ". The Metamask team quickly appealed, hoping that Google could re-examine its app, but it was quickly rejected.

To this end, Dan Findlay, chief developer of Metamask, said:

"I sincerely hope that Google auditors will honestly admit their mistakes, but in combination with the previous ban on cryptocurrencies on TouTube, this makes me dissatisfied with Google's policy on cryptocurrencies. It's hard to create something better by wanting to compromise. " In fact, this is not the first time Metamask has been delisted by Google. As early as July 25, 2018, the browser plug-in version of Metamask was removed by the Google Online Store. Although it was quickly restored in the store list after investigation, the Metamask team said When the application was taken down, there was no email notification, and after asking, the answer given by Google was: delete by mistake.

History is always surprisingly similar. Behind repeated "misoperations" is the arrogance and prejudice shown by Google.

The Apple Store's control over cryptocurrency applications is particularly serious in China. Even if the application is submitted strictly in accordance with its terms, it may not be available on the shelves. Application review, but due to the irregular online channels, issues such as "signature dropout", "flashback", and "application expired" have brought about extremely poor user experience for users.

As a Twitter CEO and a senior Bitcoin enthusiast, Jack Dorsey probably understands the significance of the blockchain and cryptocurrency industry than most people. At the helm of Twitter, he deeply felt the ills of the platform being too centralized.

On December 11, Jack Dorsey suddenly tweeted several times. The core content is that he will fund an independent small team of five consisting of "open source architects, engineers and designers" to start exploring open, decentralized The ultimate goal of social media standards is to hope that Twitter itself can benefit.

Jack Dorsey stated in his Twitter that in the current situation, social media is facing a series of severe tests. The first is that the "centralized" model is difficult to solve the problem of misuse of information and a large amount of misleading information without increasing the burden on users. ; Secondly, social media has gradually departed from the basic logic of helping users to publish and delete content, and has begun to make "smart recommendations" to users. Unfortunately, these algorithms cannot be actively selected by users and can only be passively accepted; And now social media often leads users to focus on controversial topics and some violent content, rather than positive information; Finally, Jack Dorsey said that blockchain technology provides a set of open, sustainable, manageable, and even generational Although there is still a lot of work to be done for the solution of the currency incentive model, a general framework has been formed.

According to Jack Dorsey's description, this is a set of social media changes from 0 to 1. Twitter does not intend to control the entire project, but wants to be a part of this vast project, and Twitter hopes to gain wider access to it. Of users exchange information and lead their recommendation algorithms to positive information, and the team name of this utopian project is called "Bluesky" by him.

Pomp, the founder of cryptocurrency investment agency Morgan Creek, called this a "great project", and Jack Dorsey happens to be someone with enough reputation to advance the matter.

Block.one CEO Brendan Blumer said that EOSIO-based decentralized social media VOICE has been developed for a long time and looks forward to working with the Bluesky team to promote it.

Coinbase CEO Brian Armstrong said that he was very pleased to see Twitter invest in the agreement instead of the platform. The development of the agreement is very difficult, but they have good characteristics in terms of fair use, promoting good behavior and reducing the threshold for novices.

Not only practitioners in the cryptocurrency industry, but some elites in the traditional field are also actively providing suggestions for Jack Dorsey. The Firefox browser team has expressed its goodwill, saying that in the past 15 years, it has invested heavily in exploring the free and open Internet. Hope Can help the Blue Sky team; Neha Narula, MIT's director of cryptocurrency research, provided Jack Dorsey with a 100-page report on "Building a Decentralized Social Media"; Tim Pastoor, founder of digital identity startup 2way, has Jack Dorsey This approach is analogous to AT & T's funding of Bell Labs in 1947, which successfully produced major inventions such as transistors, light-emitting diodes, and solar cells.

Behind Jack Dorsey's response, it is actually people's long-term dissatisfaction with the monopoly giant's wanton infringement on the interests of users, and the eagerness to change the status quo. When people are tired of the environment where rights and duties are not equal, leaving and rebuilding is inevitable The picky way.

Jack Dorsey's Bluesky team is about to set sail, but the exploration of decentralized social media has actually gone through years of ups and downs. Back in 2011, Bill Ottman created an open source decentralized social network called Minds, which aims to provide the world with a free, open source, sustainable social network other than FaceBook. This seems to be related to Jack Dorsey's vision coincides. At the same time, Minds is also committed to information transparency, privacy protection and user freedom of speech. On the Minds platform, anyone is free to create and delete their own data and materials. According to Bill Ottman, in the course of human development, open source systems will eventually become mainstream, just like Wikipedia. When the government begins to strictly control public opinion and exert regulatory pressure on centralized social media, Minds can become the last refuge for people. Steemit, the decentralized social media created in 2016, is perhaps the hottest blockchain technology social media today. Unlike Minds' original intention for free speech and anti-censorship, Steemit is a social network driven by the cryptocurrency economy. On its official website, there are four big words of "biaobishengjin", reminding people that good ideas can be transformed into tangible value.

On the Steemit network, users can also publish any content and it will not be deleted, but Steemit ’s own content review mechanism will restrict some spam content from appearing on the homepage of the website. If most people vote against a piece of content, the author ’s The weight will be lowered, and continuing to publish spam will make an author "credit bankrupt," even though he can still exercise the right to publish any content, but no one will see them.

In addition to the platform based on graphic content, DTube attempts to use the blockchain system to build a decentralized video website. The website uses the Steem mainnet-based cryptocurrency incentive system like the Steemit platform, and in terms of photo and video storage IPFS decentralized storage architecture is used.

Like the vision of other decentralized social media, DTube hopes to create a value network that is anti-censorship, transparent in value, and does not require permission. On the DTube website, there will no longer be cases where bloggers on the YouTube platform are wantonly deleted video content Entrepreneurs can focus more on the business rather than on the platform.

Not only the old-fashioned decentralized social media platform, new projects are also emerging. On June 1, 2019, at the june1 conference of the parent company block.one of the blockchain public chain project EOS, it was announced that a brand called Voice would be launched soon. In addition to the common features of decentralized social platforms, Voice also introduced the concept of "UBI Basic Income for All" to help everyone to make their own voice on the blockchain.

Although the exploration of decentralized platforms seems to have taken shape, there are many inherent problems.

Under the model of cryptocurrency economic incentives, the motivation for people to write articles and publish opinions is no longer pure, plagiarism, laundering, and similar content are frequent, and a large number of praises also make original users miserable; at the same time, due to the lack of strong The control mechanism, the abuse of pornographic, violent, and advertising content has also caused the project party to spend a lot of time and resources to solve it. Furthermore, because decentralized social media is built based on blockchain technology, the first users are often districts. Blockchain practitioners and users, which has resulted in the output ratio of blockchain-related content is much higher than humanities, arts, life, etc. The high threshold for platform entry and high learning costs make the growth rate of users very slow and difficult to generate Users form true social behavior.

However, the tide of the times has come, and the development of science and technology has given people more choices. Whether the crypto industry can break through the traditional cage of the world needs countless tests.