Less than 12 hours after the completion of another round of 420 million USD USD, the New York State prosecutor quickly slammed Tether and its parent company iFinex Inc. and Bitfinex into court on April 25 at 4:15 pm local time.

In the 23-page indictment, not only did Tether and Bitfinex have a vaguely concealed relationship, but more importantly, the prosecution accused the two of being suspected of multiple major violations. Further speculation, Tether even suspected of misappropriating $900 million in USDT reserves to help Bitfinex make up for the deficit. The prosecution also believes that Bitfinex and Tether are using their market position to perpetuate fraud.

If the results of further investigations are true, Bitfinex and Tether may not only face high fines, but may even be sentenced to stop operations, and both investors will suffer huge losses. According to a report submitted to the US SEC by Bitwise, according to the actual transaction volume, Bitfinex has a daily trading volume of 38 million US dollars, second only to the currency security, and is the world's second largest encrypted asset exchange. The USDT issued by Tether is also the largest stable currency in the encryption market with a market share of 79.5%. Although Bitfinex responded to the lawsuit in the first place, it did not explain the many key issues mentioned in the indictment. The wording stayed at a stage where it claimed that it was well funded and accused the prosecution of the indictment was malicious. 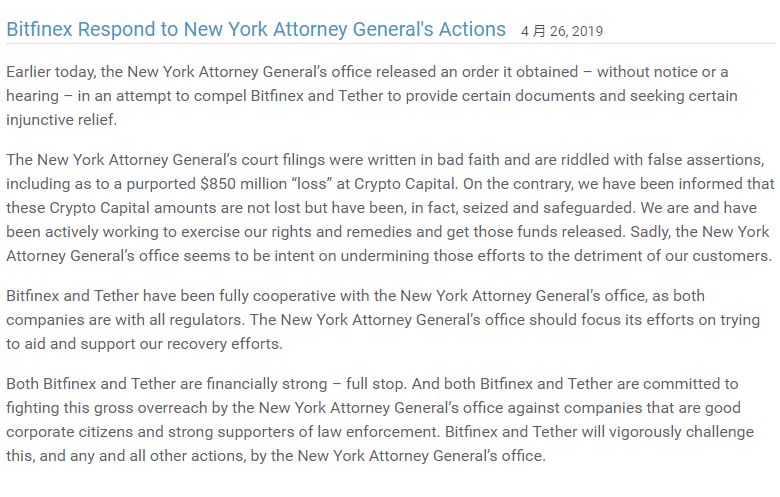 New York State prosecutors say they are trying to ban Bitfinex and Tether from further securing loans through credit extensions, mortgages, etc. to protect the interests of both investors and customers in New York. The investigation by the prosecution is still continuing, and the respondent is required to provide more information, even including the salary structure of the executive. The Mars Financial APP (ID: hxcj24h) will continue to track follow-up progress.

Regardless of the end result, this indictment has hanged the sword of Damocles for the encryption market.

According to the relevant details disclosed in the indictment, the law of the New York State prosecutor against Tether and its parent company iFinex Inc. and Bitfinex et al. is based on Section 23-A of the New York General Business Law. Bitfinex and Tether may be suspected of multiple violations, including unlicensed operations, undisclosed major issues, mismanagement of funds, connected transactions, etc., but the core focus is on the $900 million loan that Tether lends to Bitfinex (of which 700 million have completed the transaction) There is a huge conflict of interest or a huge loss for investors holding USDT.

Bitfinex and Tether are both subsidiaries of iFinex Inc., both offshore companies registered outside the United States (British Virgin Islands), and if required to engage in virtual currency-related business in New York State, they must be issued by the State Financial Services Department. License and comply with relevant regulations.

But Bitfinex and Tether have no licenses, and there is evidence that Bitfinex allows New York State investors to engage in virtual currency deposits, withdrawals, transactions, etc. on their platforms.

▶ Major issues were not disclosed

Crypto Capital, the Bitfinex and Tether payment processor, was the “culprit” of its $850 million in financial losses, and the New York State prosecutor disclosed that by the end of 2018, the company had handled a total of $1 billion for Bitfinex, but It was Bitfinex or Tether, and there was no contract or written agreement with them.

Intriguingly, there is evidence that the company confuses Bitfinex's own funds with client funds and does not dispose of them separately. In addition, the prosecution’s indictment stated that Bitfinex and Tether have a large number of cooperating payment processors to respond to customer needs, but many of the processors are the executives of their companies.

The prosecution suspects that there is a significant conflict of interest between the $900 million revolving credit loan that Bitfinex and Tether have reached, rather than the “fair trade” that their attorneys call, because the signing representatives of the two parties and the company providing the guarantee, DigFinex, are fundamental. It is said that there is a huge stake in interest.

In Articles 86-90 of the indictment, the New York State prosecutor detailed the relationship between the three: the signature representatives of both parties are also directors and shareholders of DigFinex, Tether, and Bitfinex. The owner and actual operator of DigFinex, which guarantees both parties' lending practices, is also the owner and operator of Tether and Bitfinex.

Prior to the issuance of the indictment, the New York State prosecution’s investigation of Bitfinex lasted for at least six months. Bitfinex and Tether have appointed their agency as the respondent to accept the inquiries and provide a series of information documents in accordance with the requirements of the prosecution. Since November 2018, the New York State prosecutors have repeatedly negotiated with the attorneys, and the two sides met on February 21, 2019.

According to the information provided by the attorney, the New York State prosecutors found a series of unusual things, the most notable of which was the email exchange between Bitfinex executive Merlin and its Panamanian payment processor Crypto Capital, covering 2018. August 15th to November 21st, 2018.

The e-mail not only hinted at Bitfinex's liquidity crisis in the second half of last year, but also hinted at the root cause of Bitfinex's difficulty in withdrawing cash in October last year – which was completely different from the official announcement of Bitfinex at the time.

On October 15, 2018, in a deal with Crypto Capital, Merlin emphasized the dangers and urgency of the situation. He said that if the funds returned by Crypto Capital were not available, investors and the entire encryption community would be in a very dangerous situation. However, according to the information provided by the prosecution (Mars Finance did not find relevant information on the Bitfinex official website), Bitfinex said in the official notice of the day that "all cryptocurrencies and statutory withdrawals are in place. And it is always there. Normal processing, Nothing to interfere with… All legal currency (US Dollar, British Pound, Japanese Yen, Euro) withdrawals are being processed, as usual.” Source: New York State Prosecution Indictment

In the emails that were sent, Merlin repeatedly urged Crypto Capital to repay, but Crypto Capital did not give a definitive answer. Finally, Crypto Capital staff said that the $851 million huge amount was seized by the Portuguese, American and Polish governments. This eventually caused Bitfinex's concerns in December 2018, but Bitfinex did not disclose the loss.

At the February 21 meeting, Bitfinex and Tether's attorneys told the New York State prosecutor, "To compensate for the apparent loss of $851 million in crypto assets, Bitfinex and Tether are considering a deal that allows Bitfinex to extract Tether as needed. Cash reserve." It is this wording that has raised questions from the prosecution.

The attorney said that Tether may withdraw $600-700 million from the USDT reserve and lend it to Bitfinex in the form of a revolving loan credit, but they did not explain to the prosecution whether the decision would be disclosed to the public or investors. When the prosecution asked if the transaction involved a conflict of interest, the lawyer only described it as “fair trade”, but there was no sufficient reason. The relevant loan terms, repayment schedules and timetables are also not stated.

However, in an email sent to the New York State prosecutor on March 29, the attorney said that “the transaction was completed two days ago (March 27)” and the information disclosed in the email was also met on February 21. The information mentioned is very different – not only the previously mentioned information, but also an undisclosed $625 million transfer of funds (from Tether to Bitfinex) in November 2018 to address the flow of Bitfinex Sexual problems.

The e-mail also mentioned that after confirming that it suffered a $850 million loss from Crypto Capital, Bitfinex quickly reached an agreement with Tether to seek a $900 million revolving credit loan on a reasonable basis, with the loan held by DigFinex. The 60 million shares of iFinex Inc. were secured as collateral, and the transaction ended on March 19th. Bitfinex has received approximately $700 million in loans on the day of the mailing.

What worries the New York State prosecutor is not only that the deal may be a connected transaction, but that its risks are not fully disclosed to investors. In Article 92 of the indictment, the New York State prosecutor wrote that “whether it was November 2018 (the original for 2019, suspected clerical error), the $625 million transfer of funds was based on Tether’s reserve of $900 million. Revolving credit loans are not disclosed to investors. "

New York State prosecutors appealed to Bitfinex and others for further investigation, and Tether was involved in another round of suspicion and controversy about its reserve status and transparency. This is not the first time in the history of Tether to face such a crisis – in fact, since the birth of the USDT, such controversy has existed, and the regulatory authorities have repeatedly sent subpoenas to it.

On October 15, last year, Tether’s bankruptcy in Noble’s depository, Noble, caused the USDT to plummet, with a minimum of $10.89 – although the USDT rebounded afterwards, but until November 1st Tether publicly announced that it had been with the Bahamas. The Bank of Deltec Bank & Trust Limited established a partnership that stabilized the market when it held $1.83 billion in assets, enough to support the $1.78 billion outstanding USDT.

This time, according to the prosecution's indictment, Tether is likely to misappropriate the USDT reserve for Bitfinex's rivers and lakes, and the total amount is at least $900 million. Even if the doubts about the possible stakes in the transaction parties are not taken into account, combined with the timeline of Bitfinex's liquidity and Tether's information on the transfer of funds and loans, the prosecution has reason to suspect that Tether has carried out such operations.

Otherwise it is difficult to explain that on March 4, 2019, Tether suddenly issued an official announcement to change its reserve system, expanding the USDT reserve from US dollars to include “traditional currency and cash equivalents, and sometimes other assets and accounts receivable. These assets and receivables (from Tether's loans to third parties), which may include affiliated entities."

The indictment states that in November 2018, Tether had transferred $625 million to Bitfinex. Earlier, from November 2017 to December 2018, USDT could not even buy and trade directly through Tether. By Bitfinex.

Now USDT has secured the first spot in stable currency. Even though many rising stars try to challenge it, its throne is only stabilized after a slight shock. Mars Finance APP roughly statistics, the current share of USDT in the stable currency market is close to 80%. Although the crisis on October 15 last year, many stable currency projects have risen, diverting the market share of USDT, but there is still a long way to go before the challenge.

However, if the New York State prosecutor (which may also draw the attention of other regulators) finds sufficient evidence in further investigations, or before the evidence is found, people are under pressure to question the USDT 1:1 ability to accept the US dollar. The butterfly effect may trigger a bigger hurricane.

Is there a better choice? 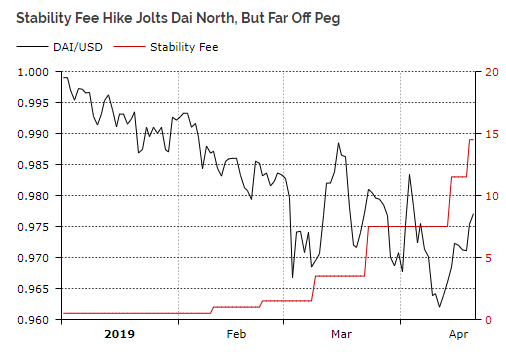 Perhaps there is no fundamentally most effective stable currency solution.

However, we can still find some improvement from USDT – in fact, PAX, USDC is seeking such a compromise path. Although it is still the same as Tether's "mortgage mortgage" model, centralized operation, but more active to seek supervision and compliance, and to disclose its reserve information to the outside world, although this can not fundamentally solve the problem, but at least eliminate some Uncertainty. 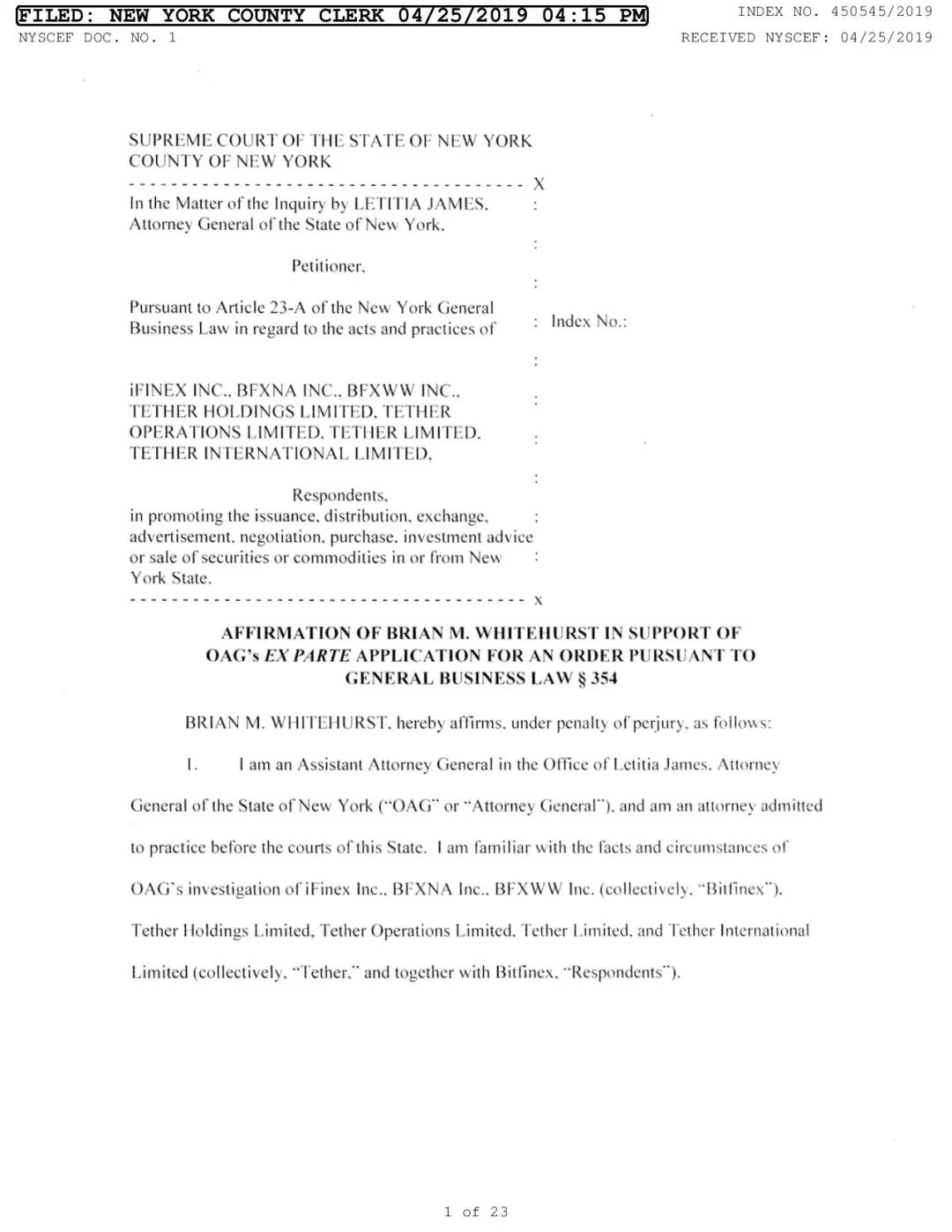 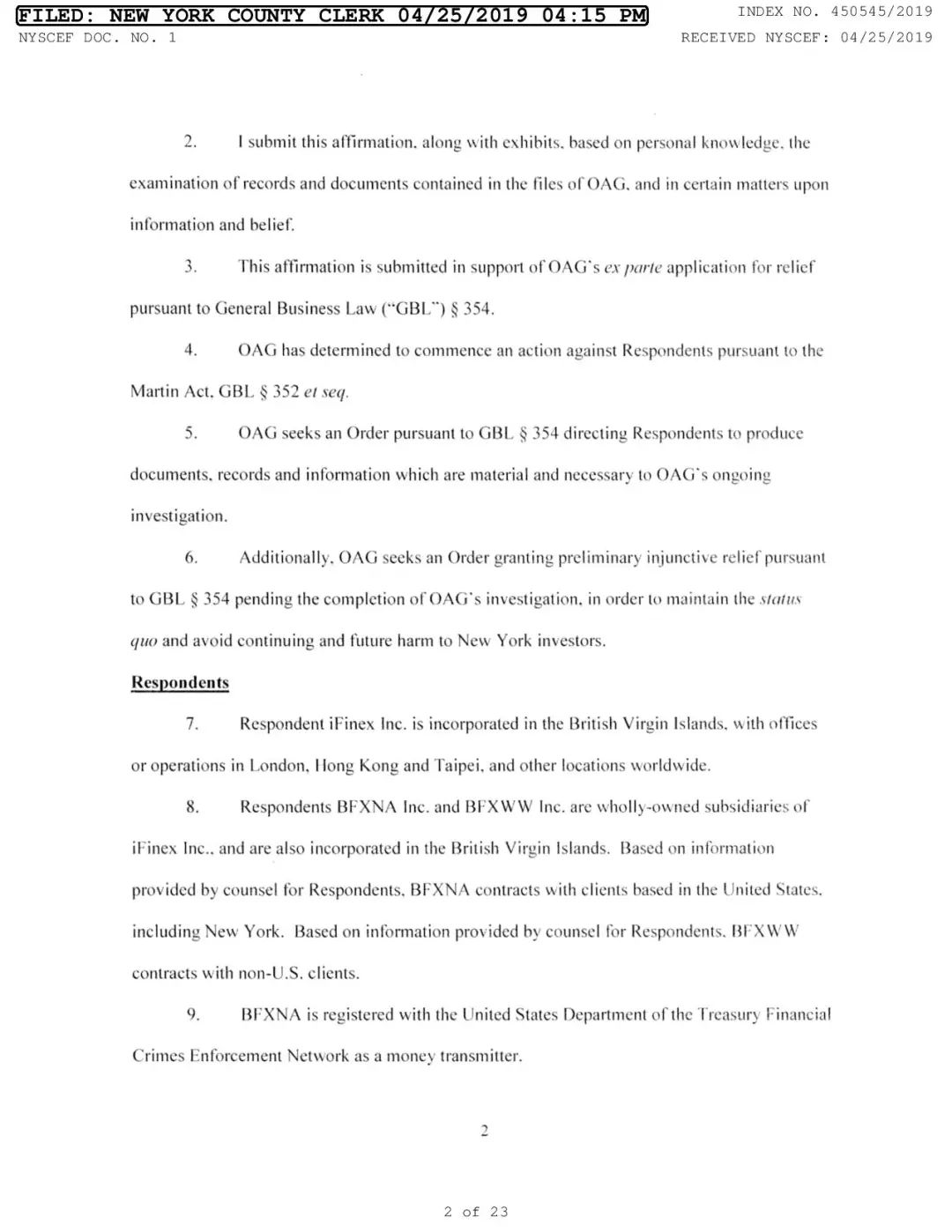 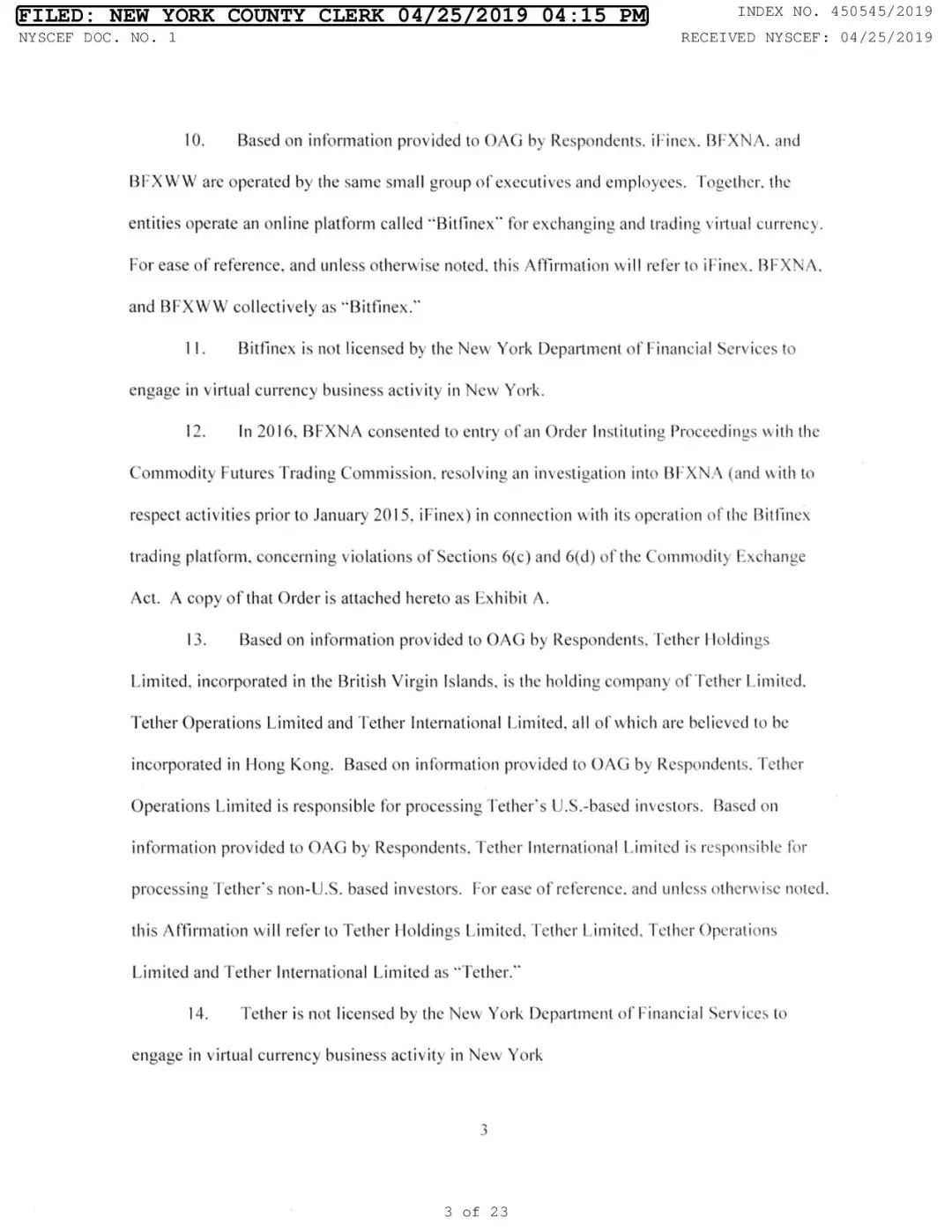 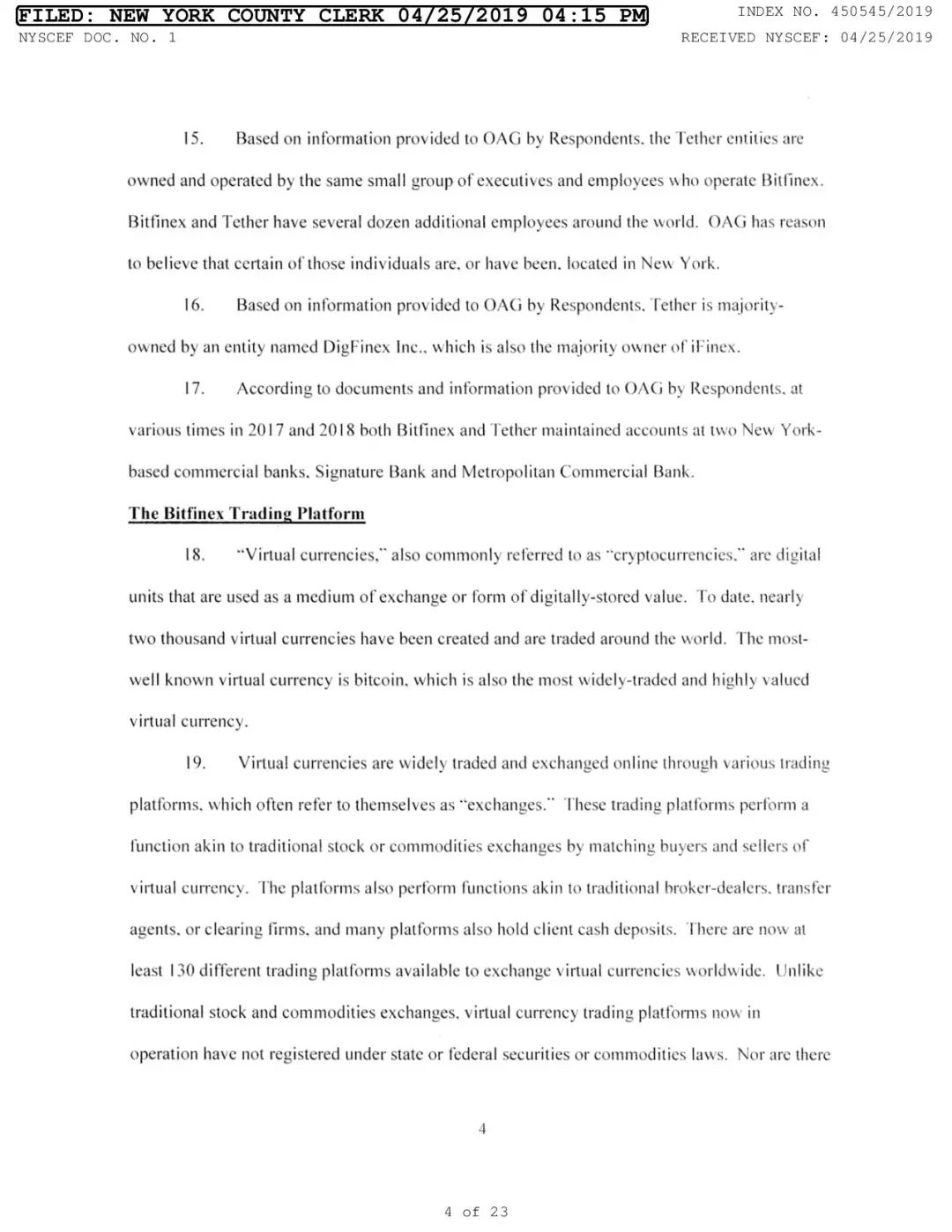 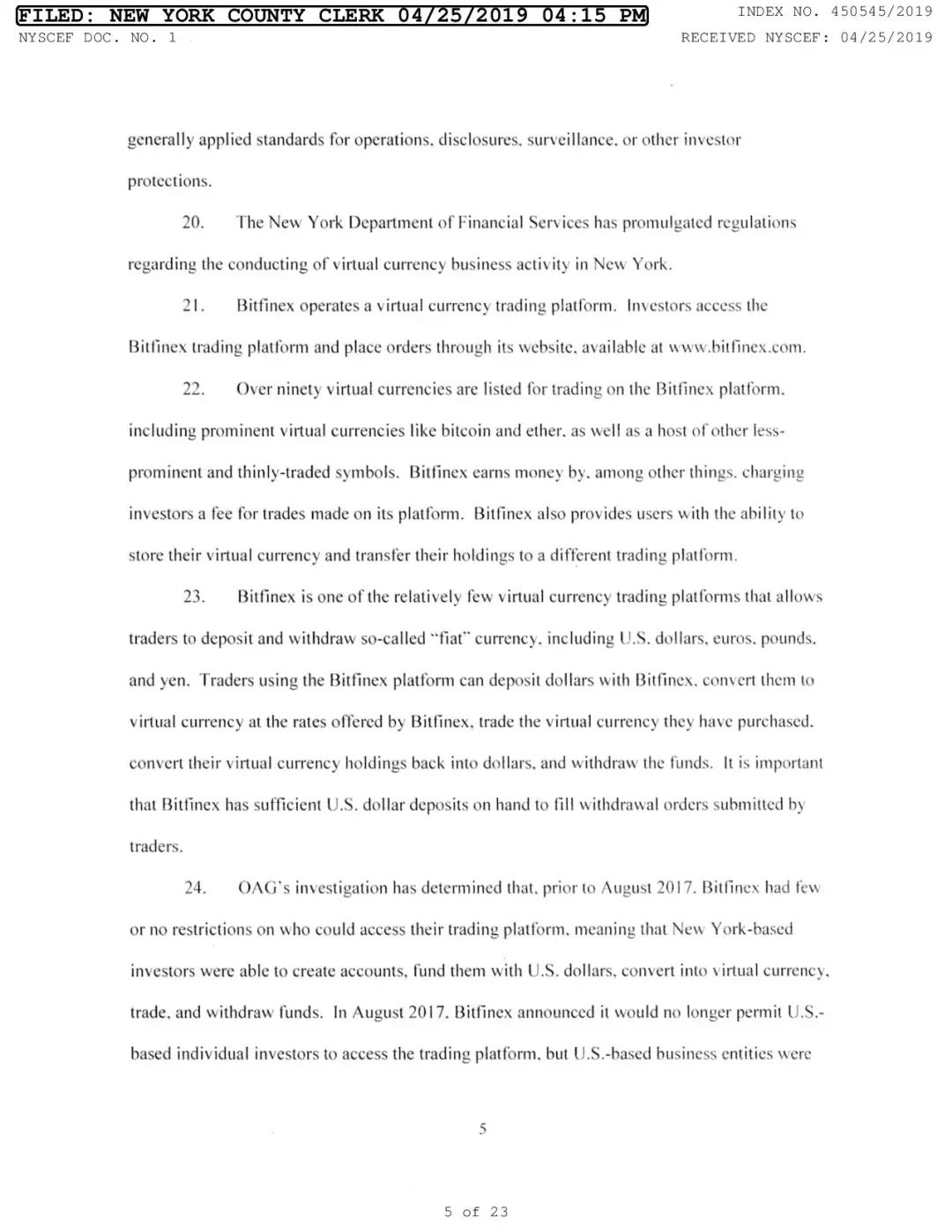 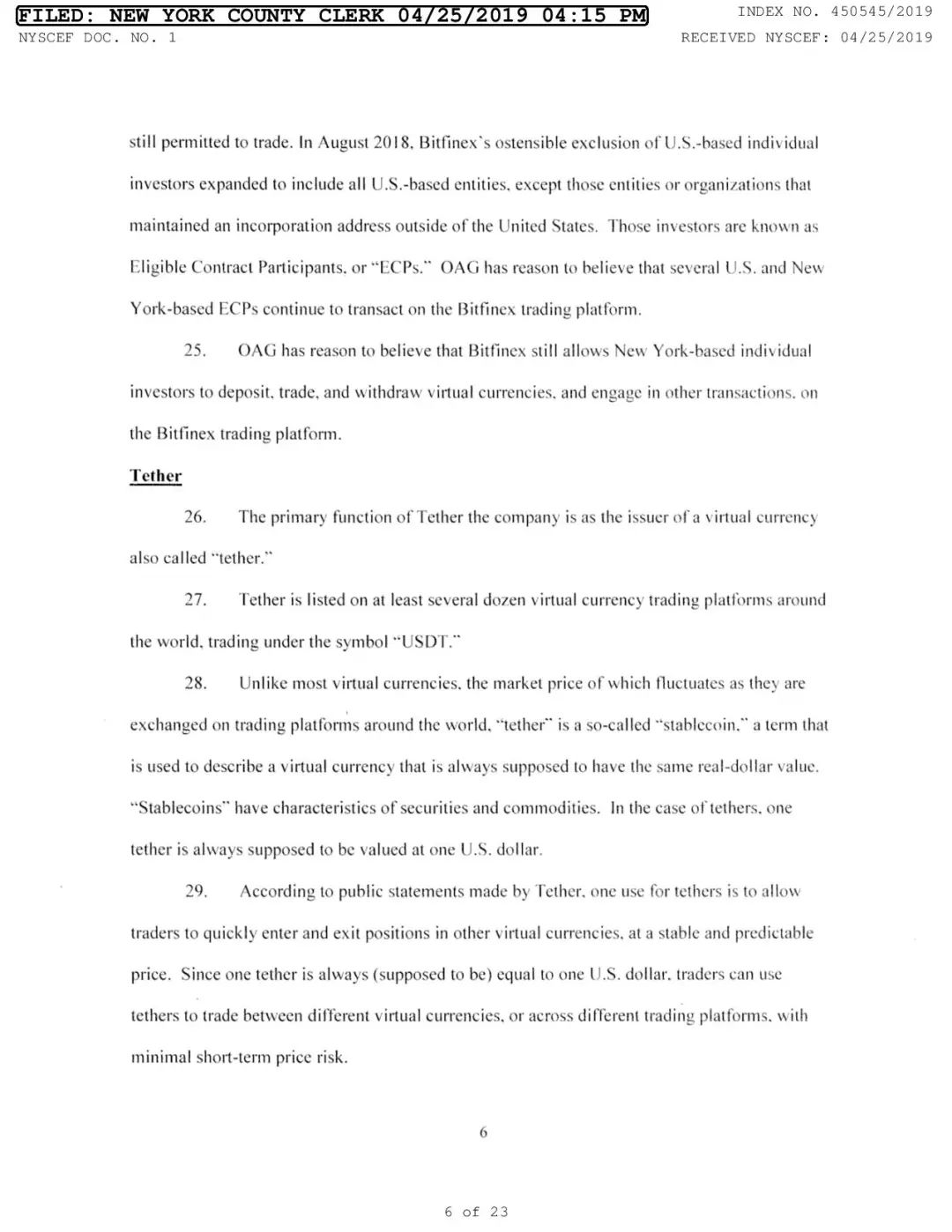 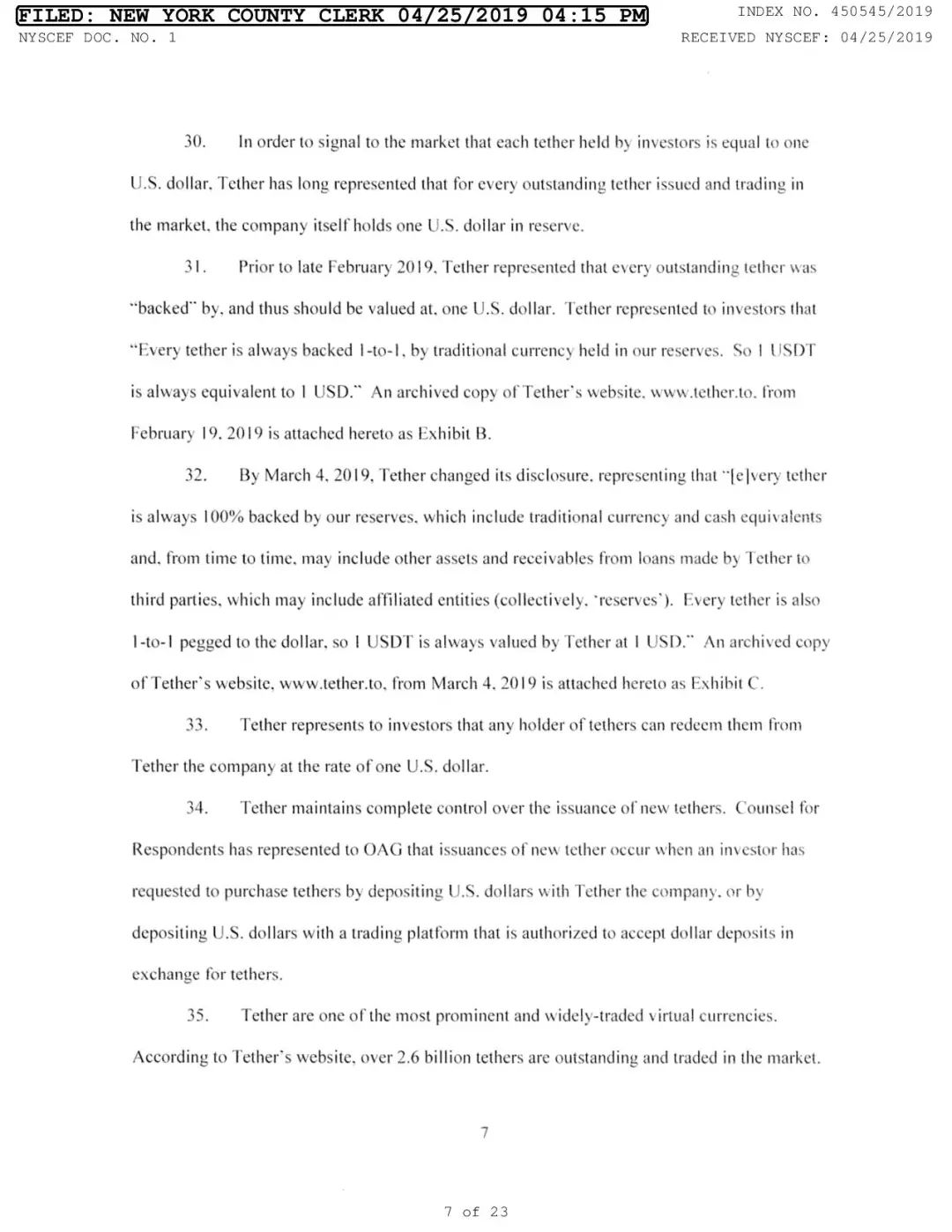 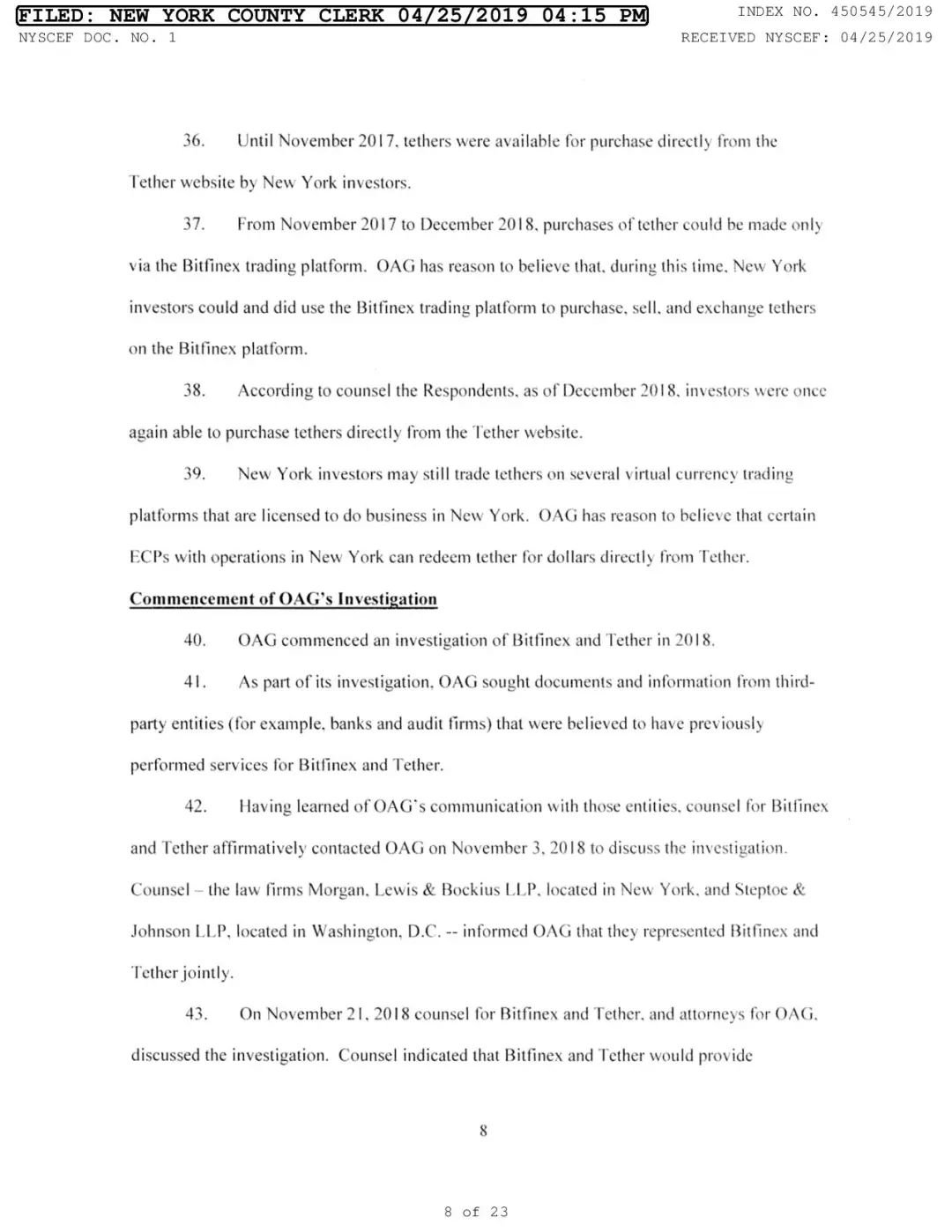 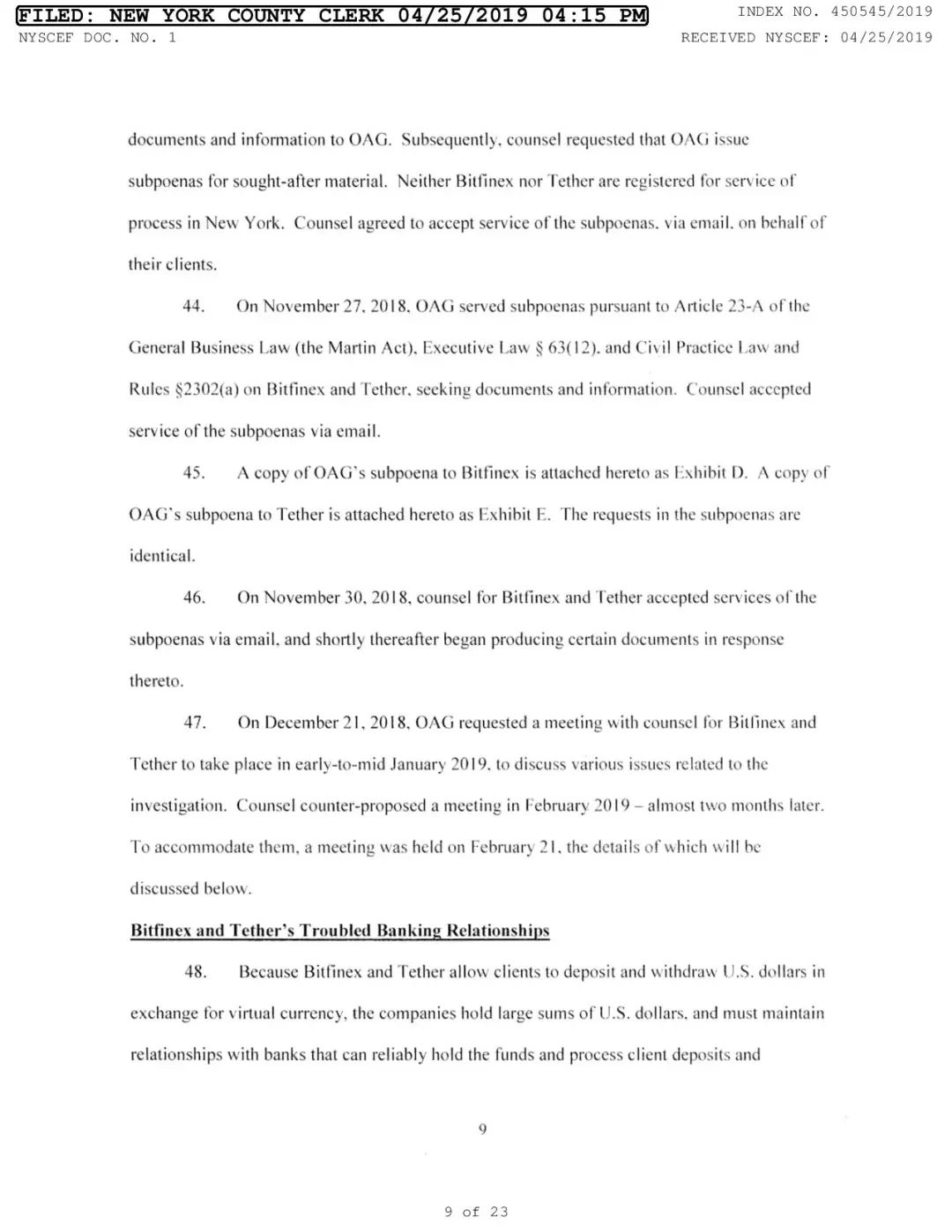 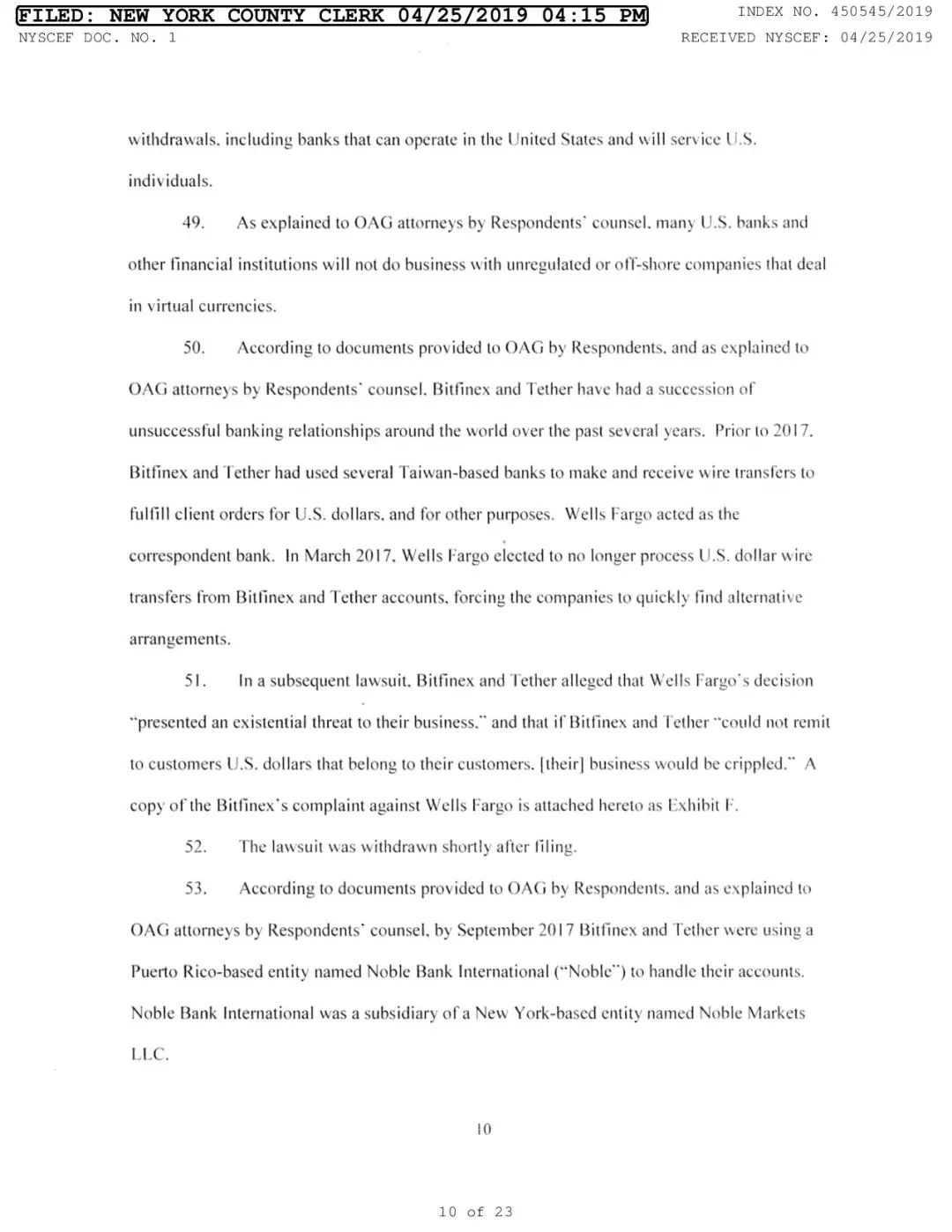 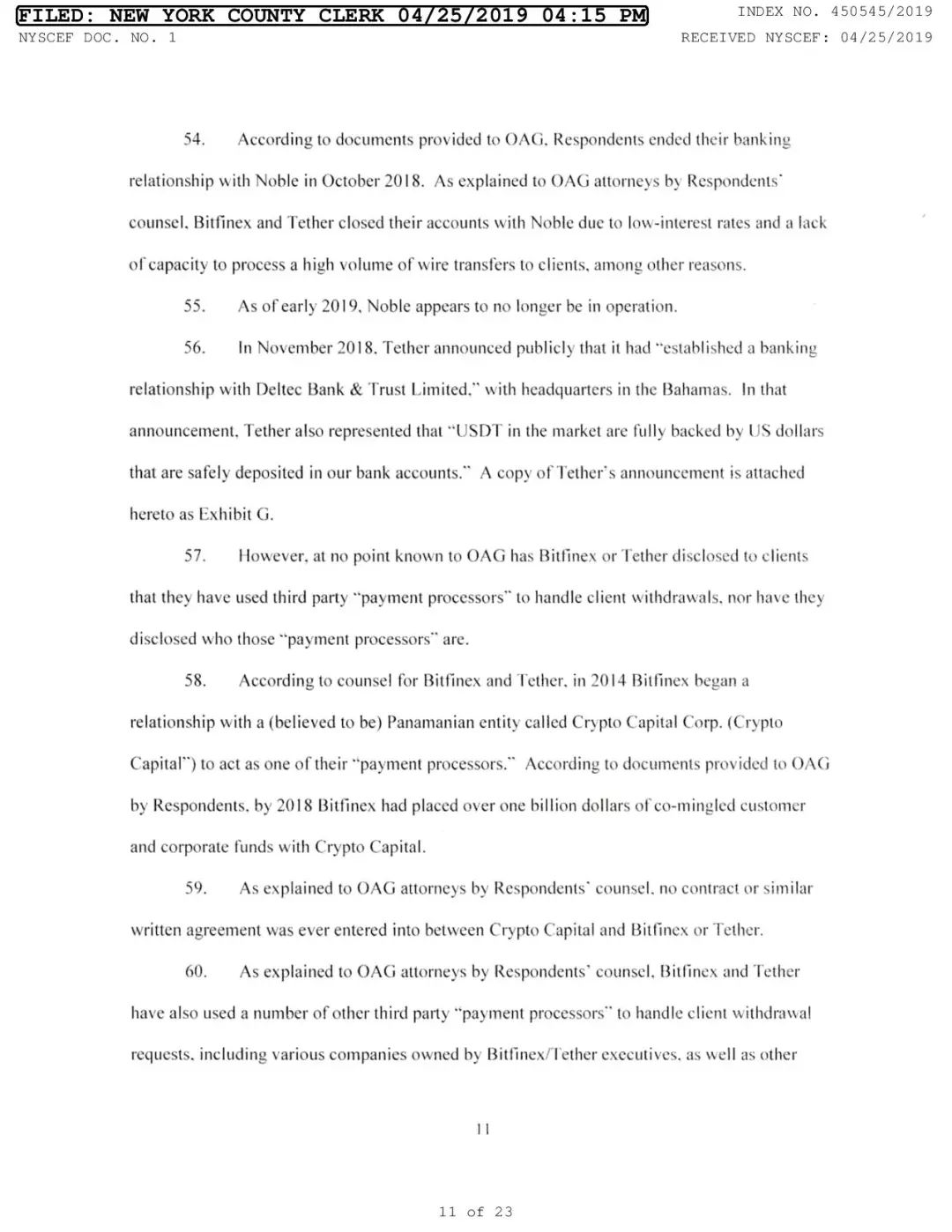 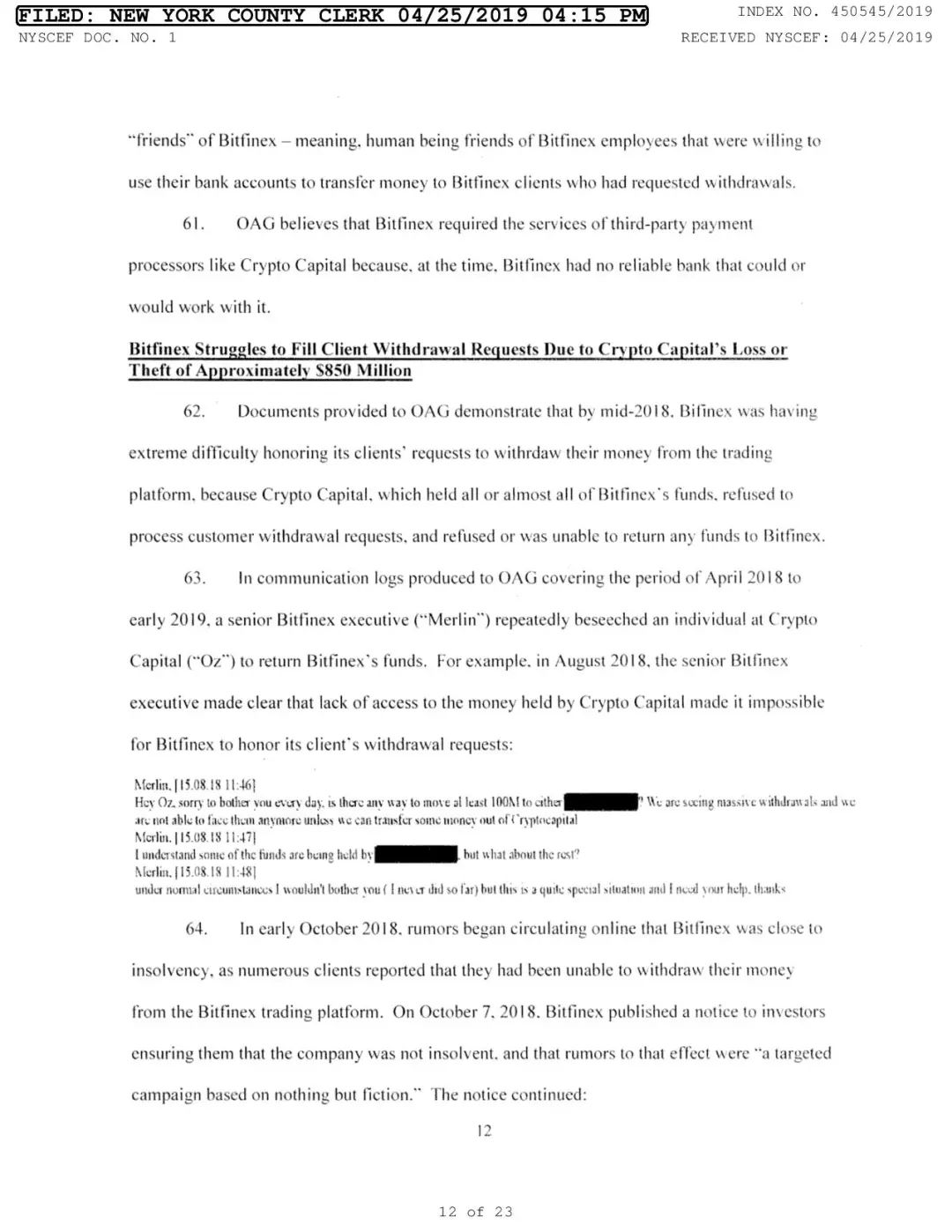 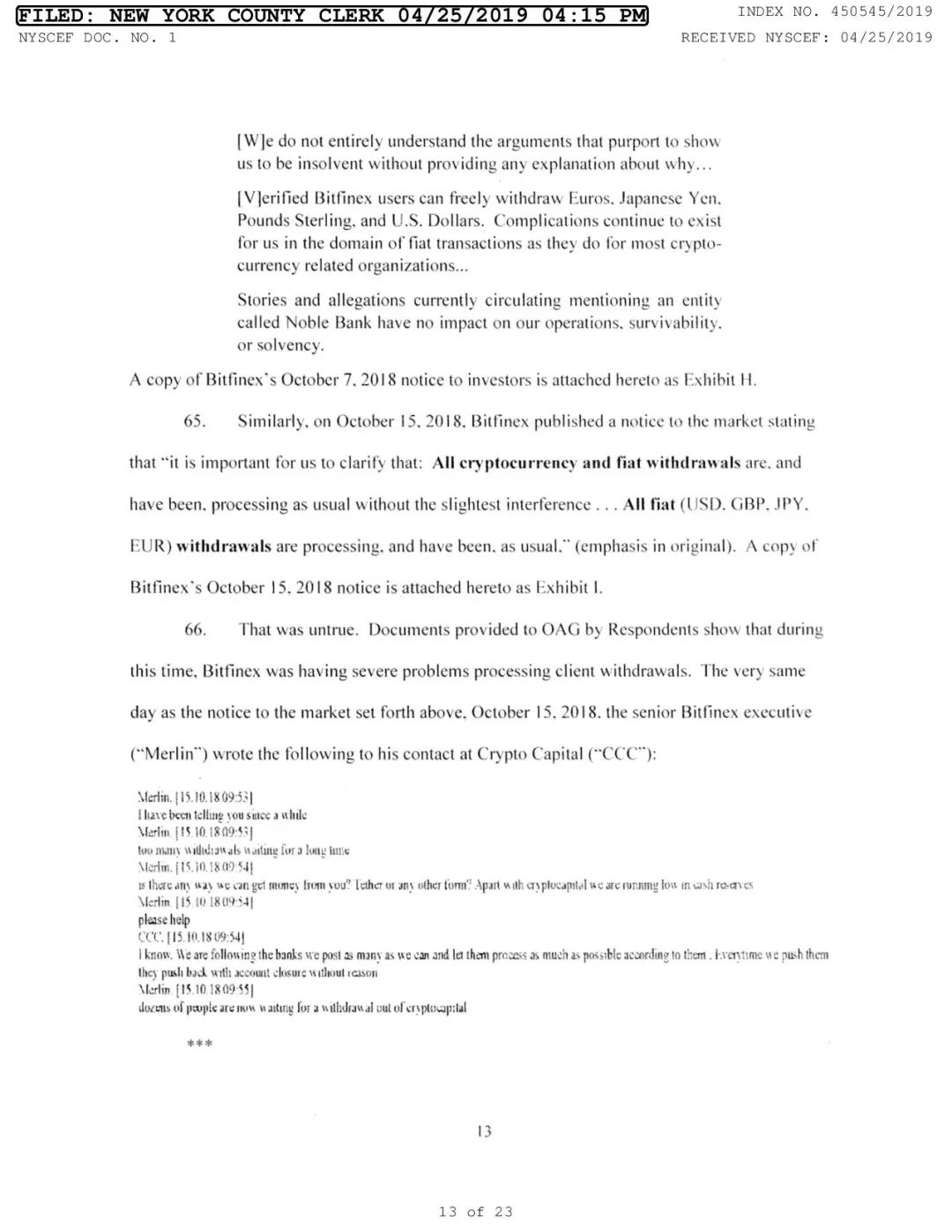 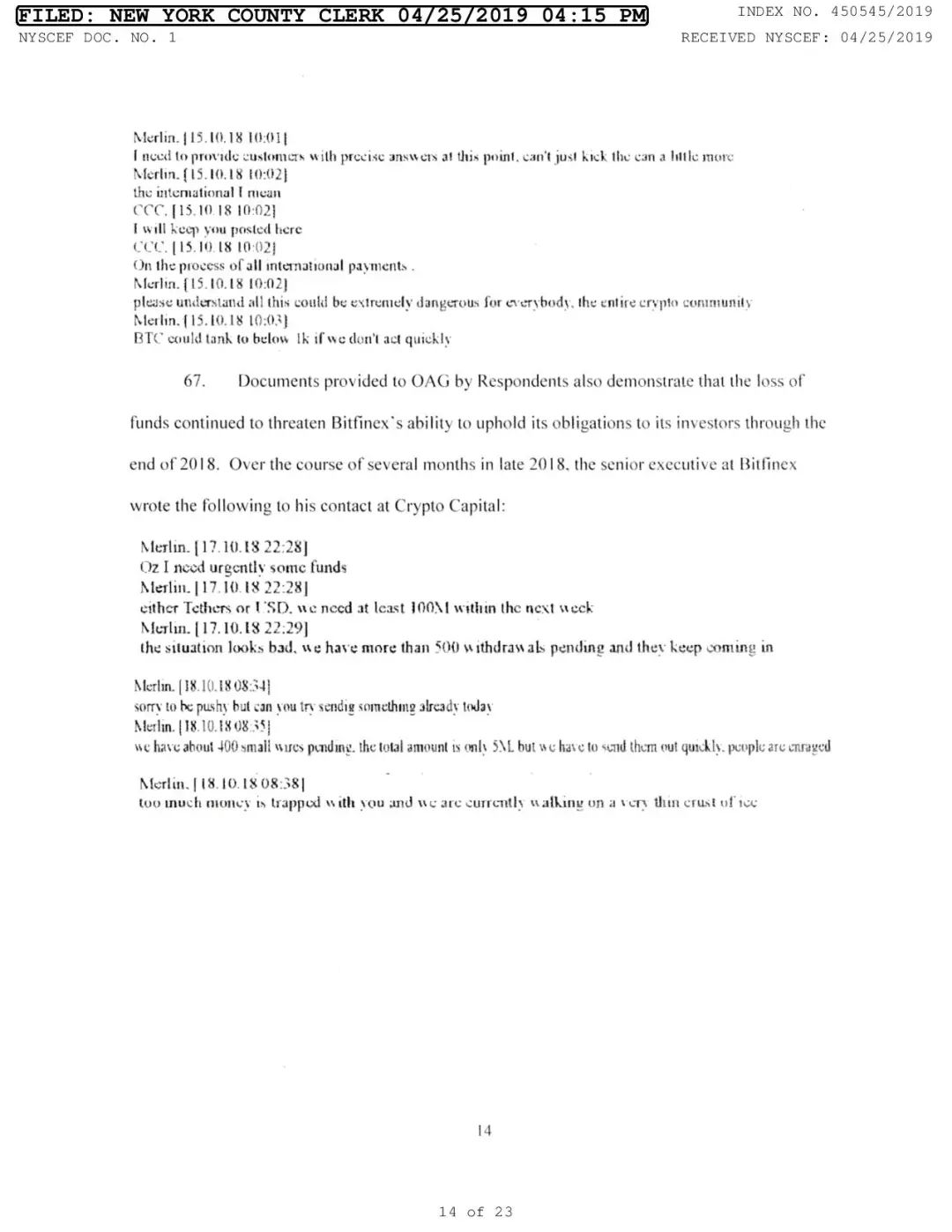 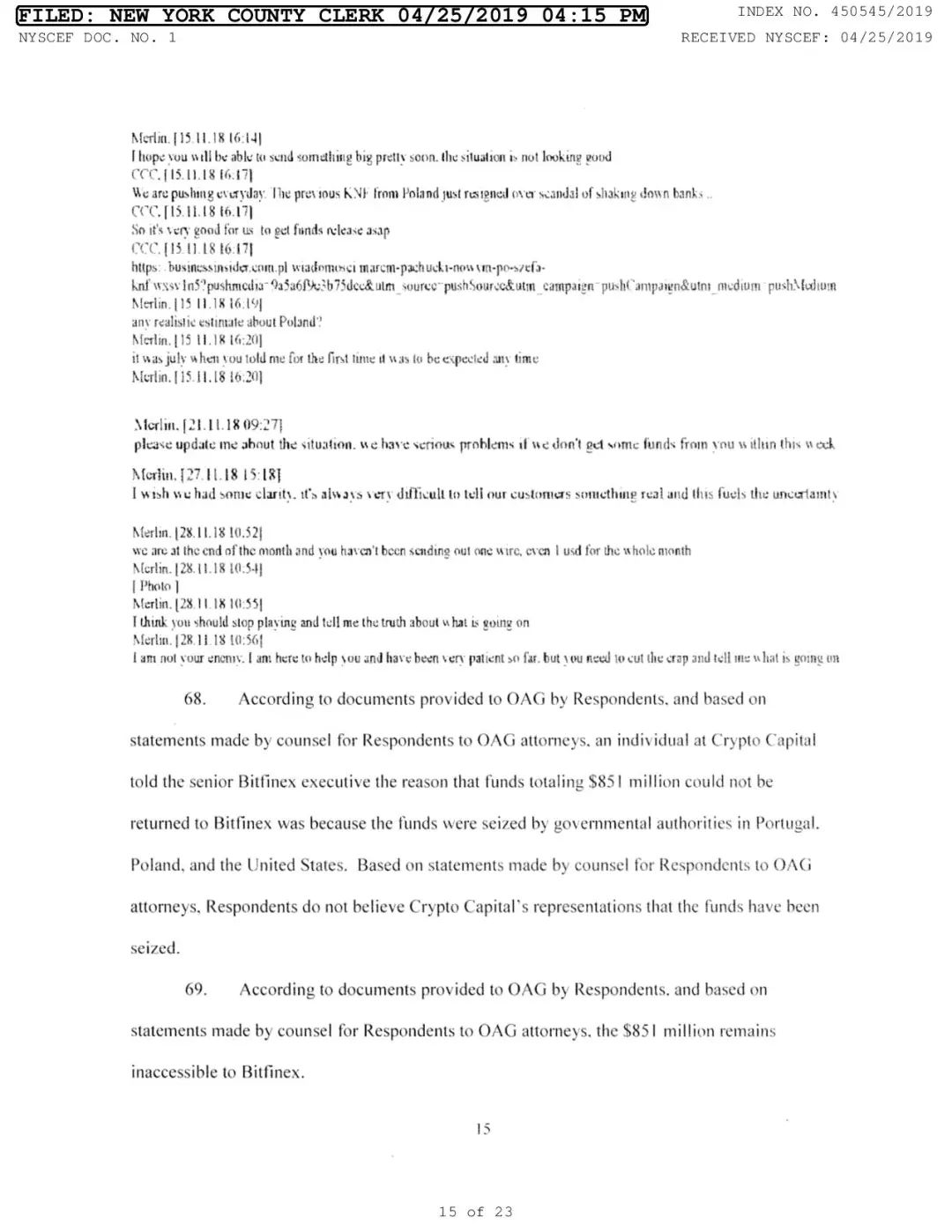 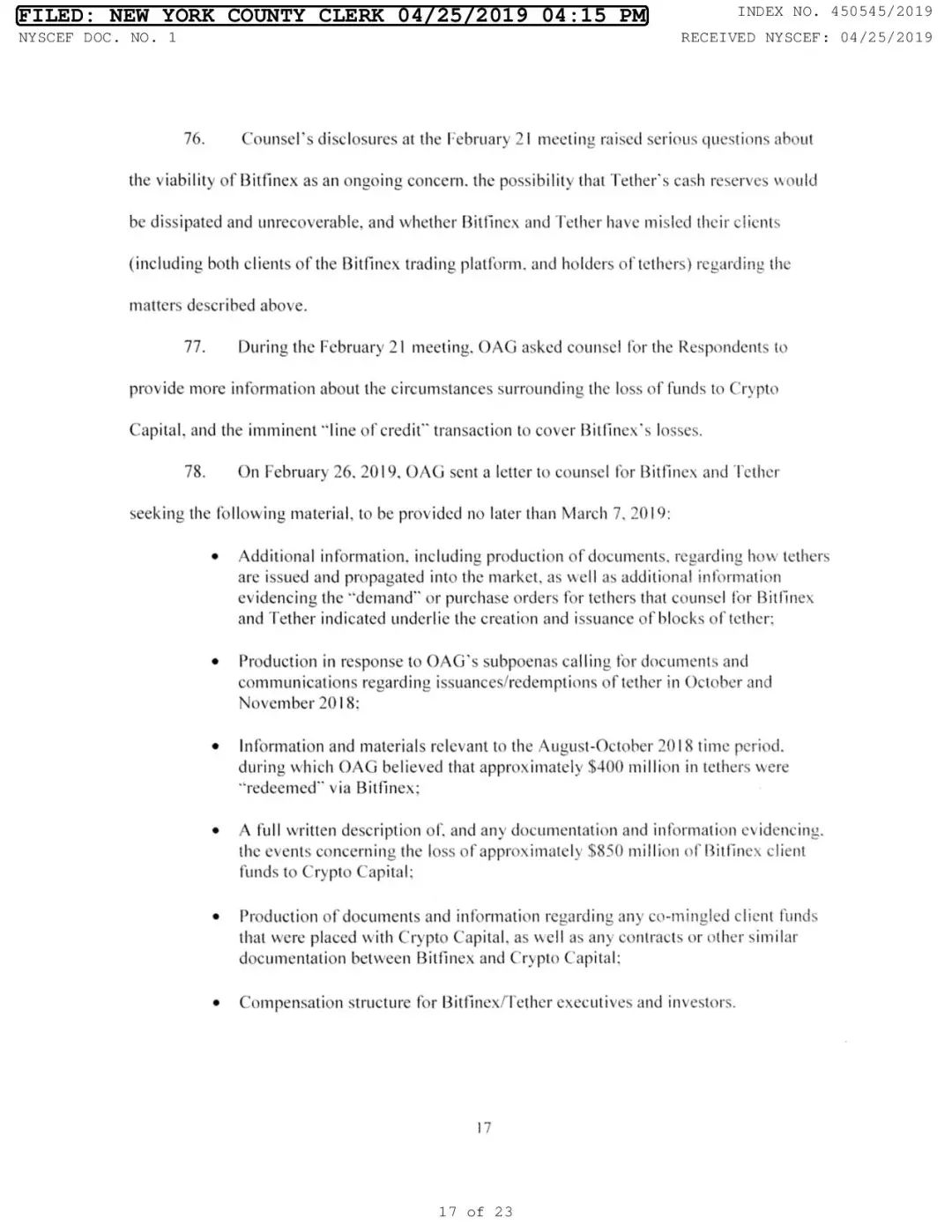 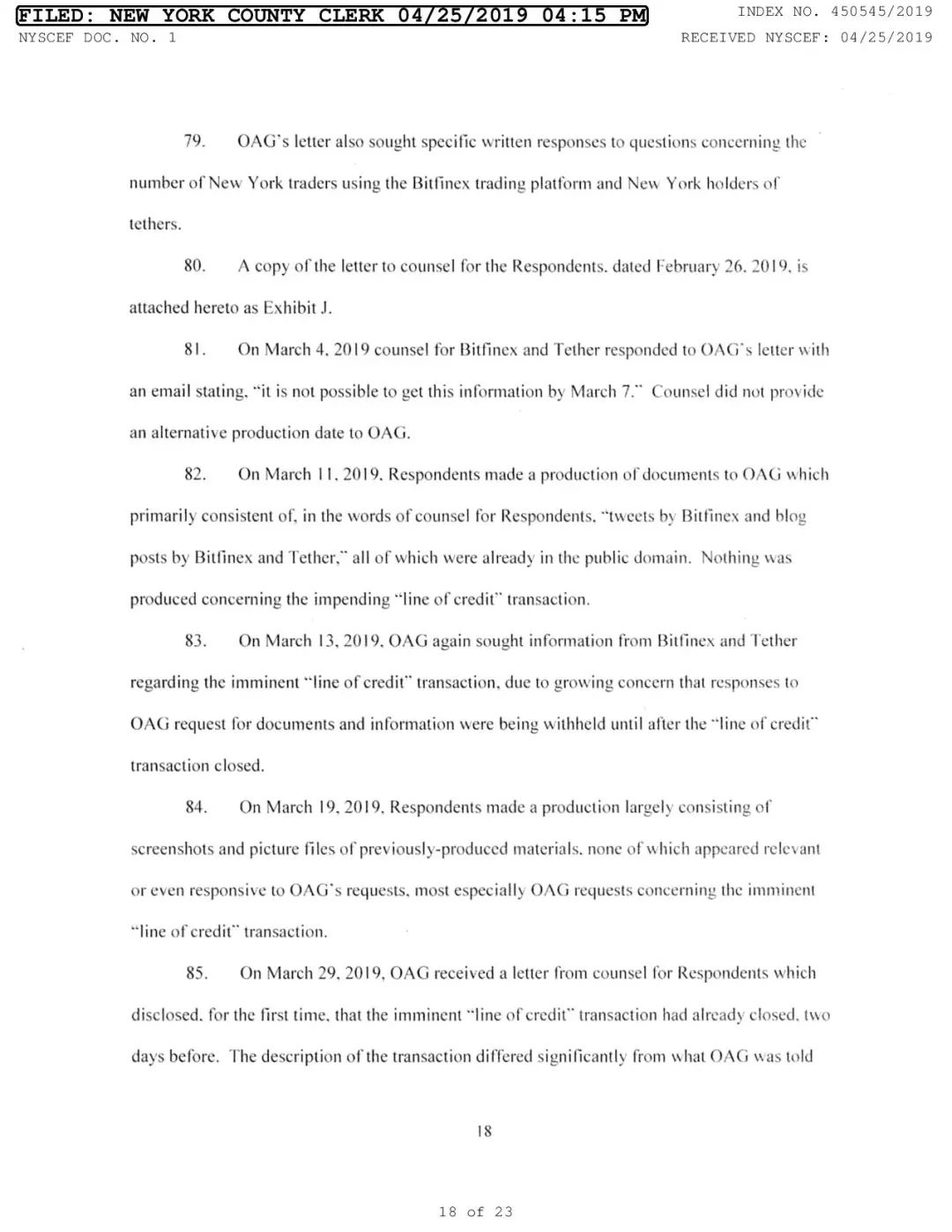 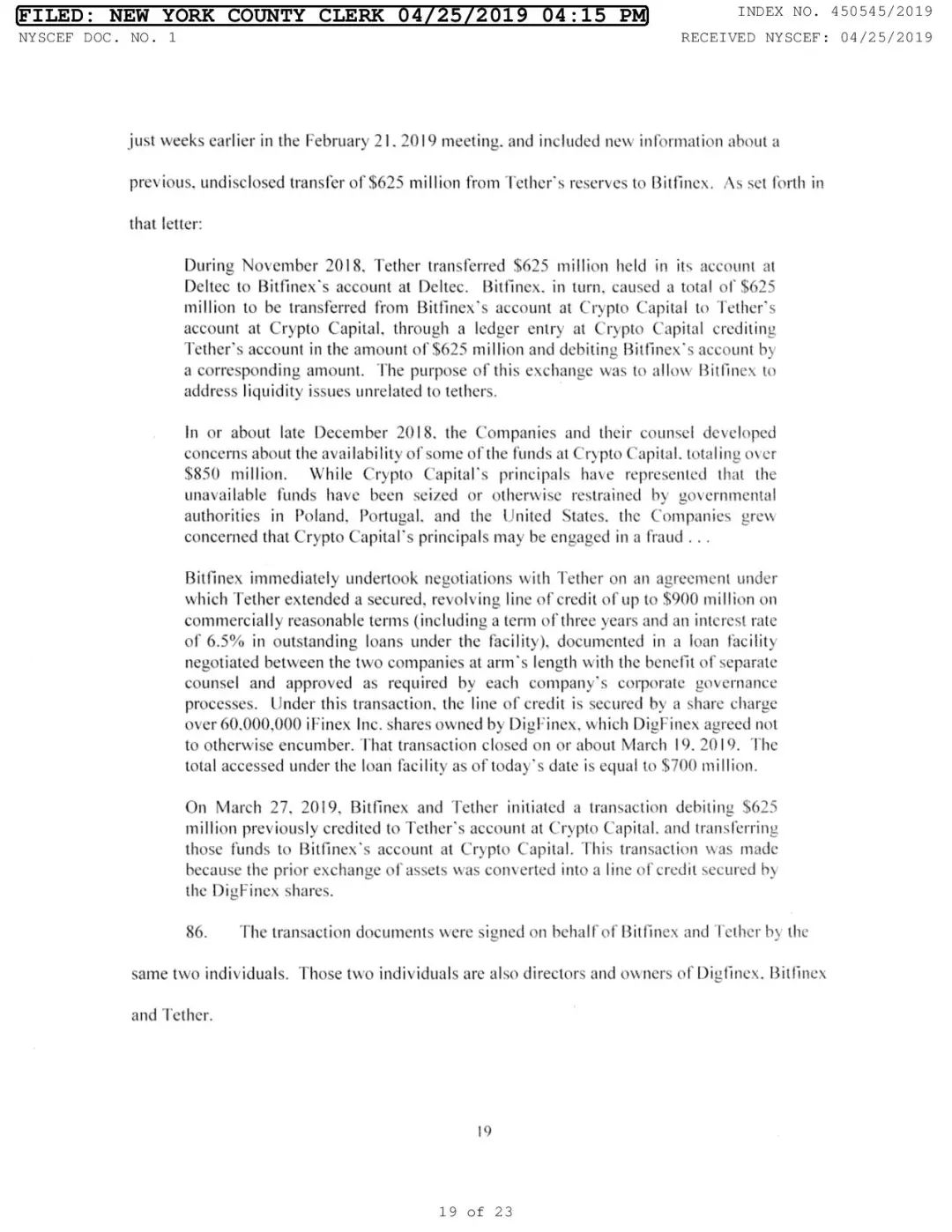 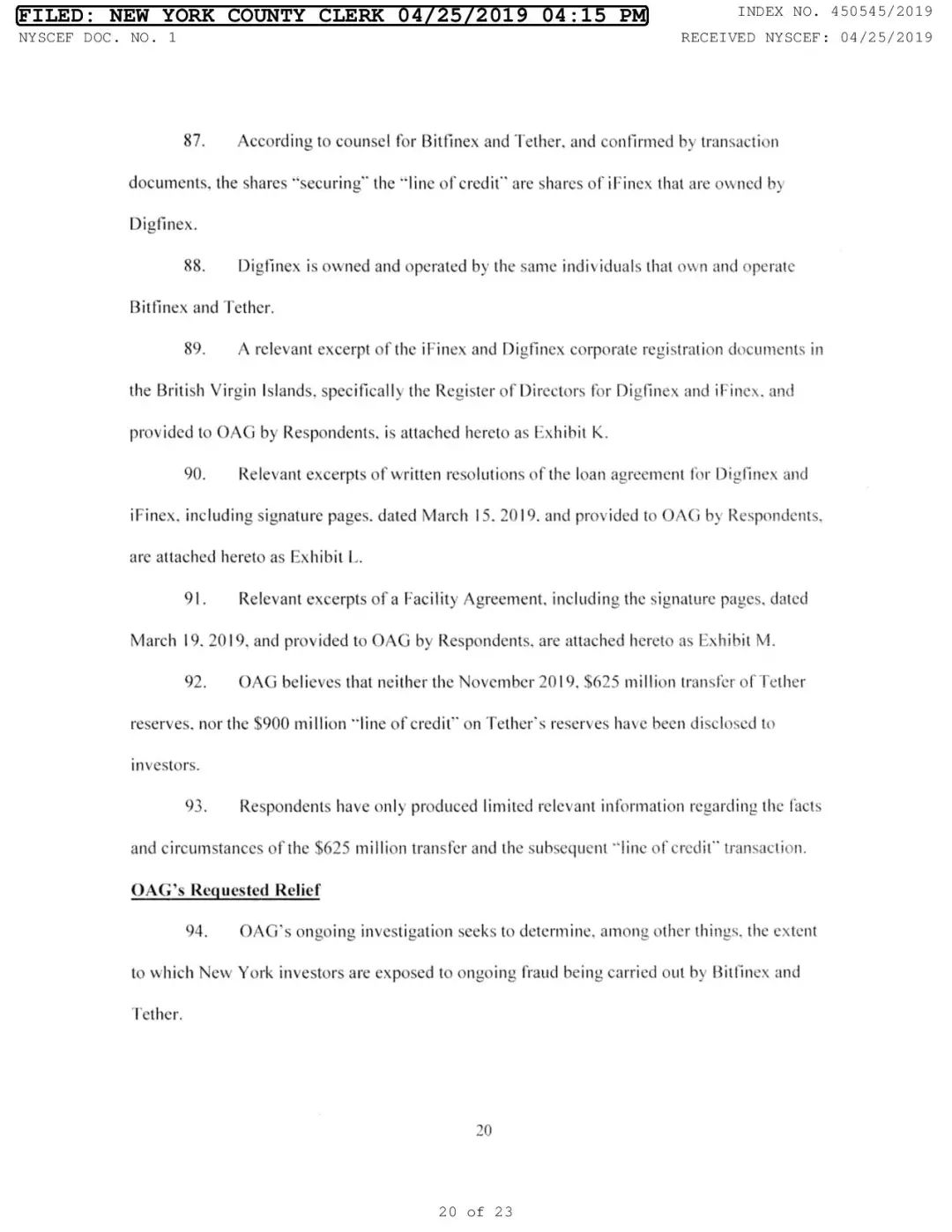 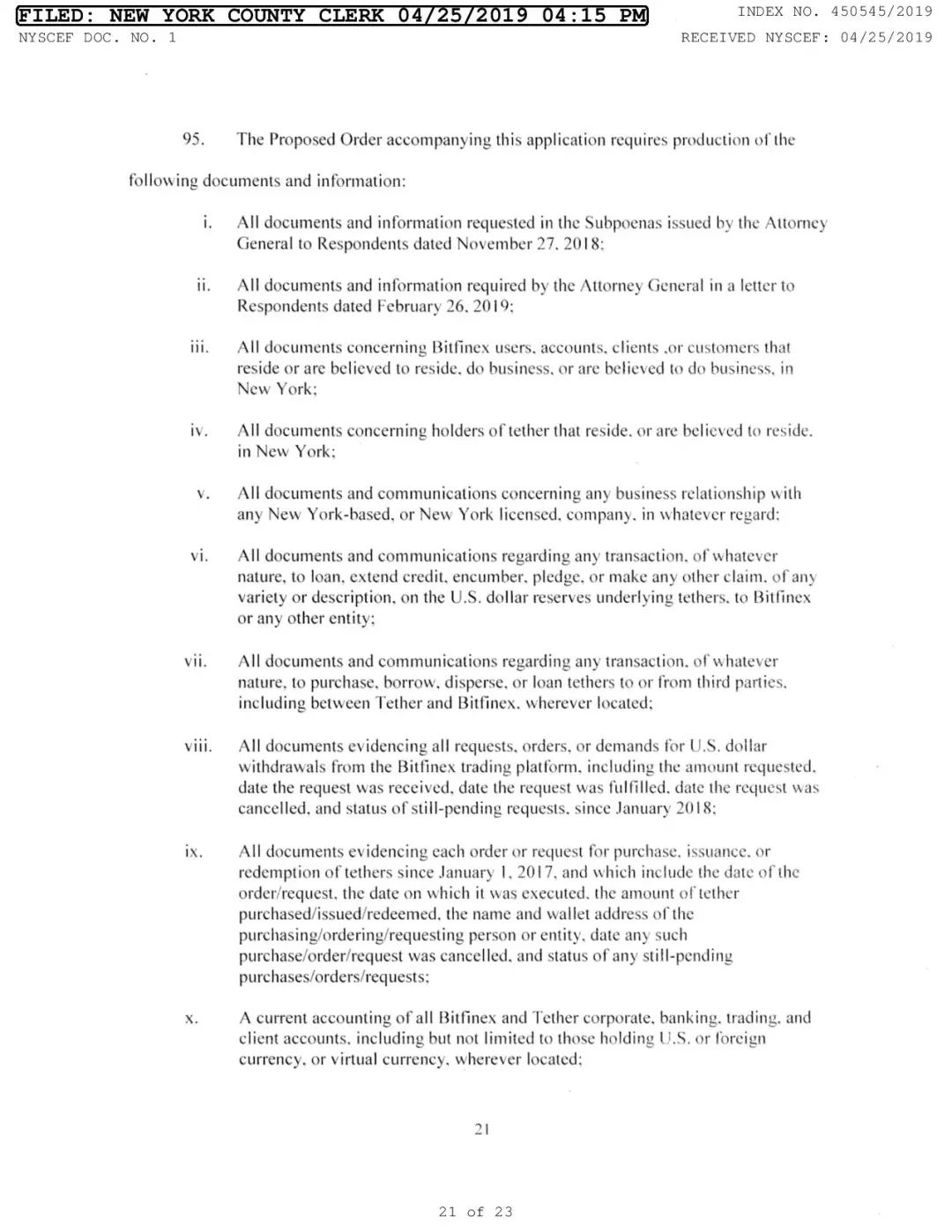 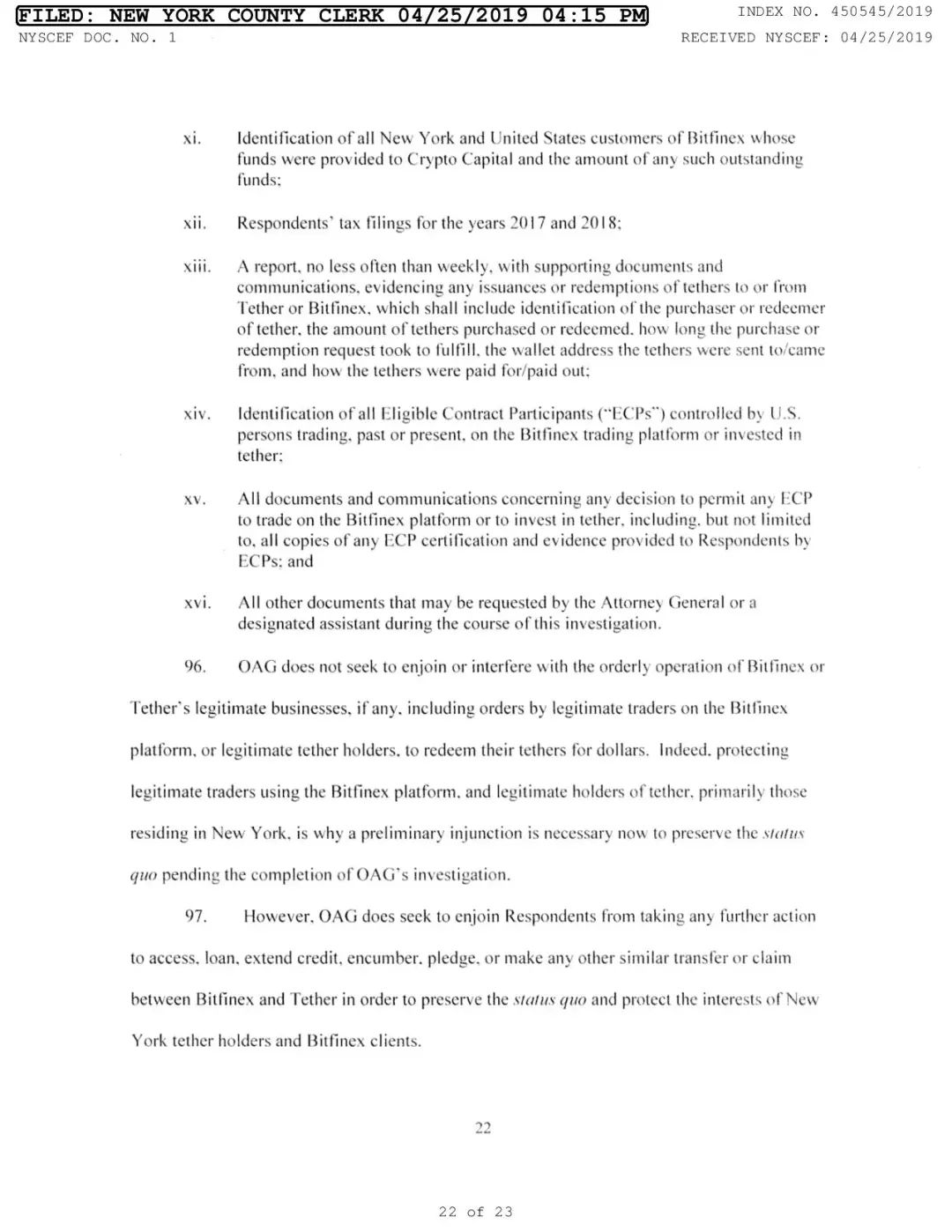