“In order to observe how college students fry the garbage, I printed 50 paper purses and did a boring experiment.”

Emojicoin.exchange is probably the most interesting experiment I have seen recently. The story stems from a recent experimental product by Burner Wallet's founder, Austin Thomas Griffith, who explored on-boarding issues. He sent 50 paper wallets to students in a classroom, so that college students who have never touched the blockchain can complete the first intimate contact of the encrypted world without having to remember the words and download the app: Garbage coins (shit-coins), then observe and record their reactions. The end result shows that as long as there is a better user experience and more interesting products, the digital currency is not so far away from the average person, and people are actually very easy to get started. Before you start introducing this interesting experiment, let's take a brief look at the Burner wallet.

Burner wallet is a web wallet with a minimalist experience. When you use it, it will generate a one-time wallet address for you. You can use this wallet to easily collect or transfer xDai, and then you can turn xDai in Burner wallet to yourself safely after you get home. In the cold wallet, destroy the private key of the Burner wallet temporary wallet. So, in a sense, it's a bit like a "transitional wallet" that is "not so safe" but "more convenient, better user experience." Griffith is based on Burner wallet's emojicoin.exchange emoticon trading experiment.

The experiment is this: First, they posted a smart contract on Ethereum's sidechain xDai, a smart contract that allows speculators to buy and sell emoticons and fire a junk coin called emojicoin. The price of this emoticon package has been written in advance in the smart contract, and its price fluctuations are entirely dependent on the hash value of the new block that the miners have recently packaged. Simple, rude, boring, and fun. What the game participants have to do is to profit from the low buy and sell of these junk coins – that is, "fried coins." Of course, just a contract to send a garbage coin is not necessarily enough for the innocent college students to play. In order to lower the threshold for these new users to get started, Griffith printed 50 copies of the paper wallet in advance, with the private key of the wallet address on the paper, and a $5 junk coin in the wallet. This way the user's operation becomes very simple. Just take out the private key of the mobile phone scanning paper wallet and you will get a digital wallet with 5 US dollars of garbage. You don't need to remember the words, you don't need to download the app. . 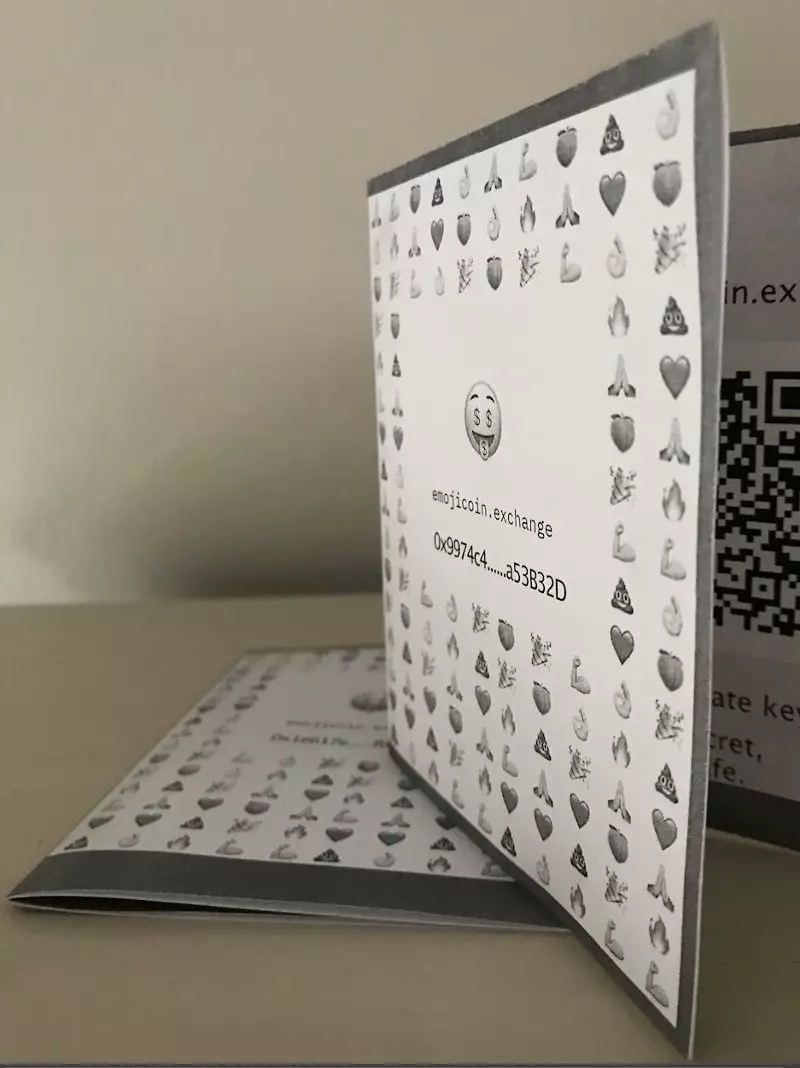 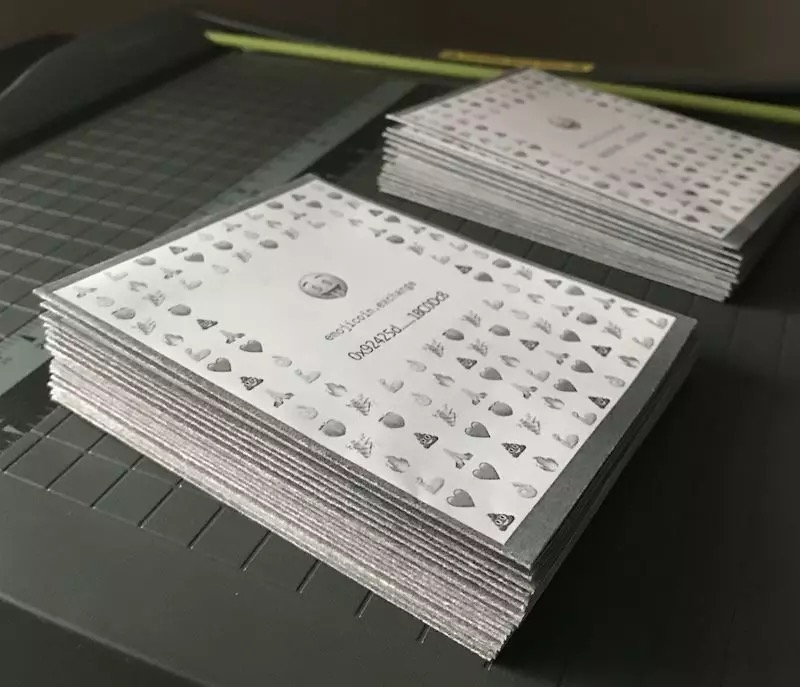 Once you have a wallet, you can choose to use the $5 rubbish coin directly with an official bank in the game to redeem it. You can also choose to use the $5 junk coin to buy and sell emoticons. Try to earn more. More money. Each account can be cashed out of the official bank for up to $100 xDai by buying and selling garbage. After the college students got the wallet, the reaction was very interesting. In 5 minutes, more than 80% of the people started trading emojicoin and went directly to the "fried coins". 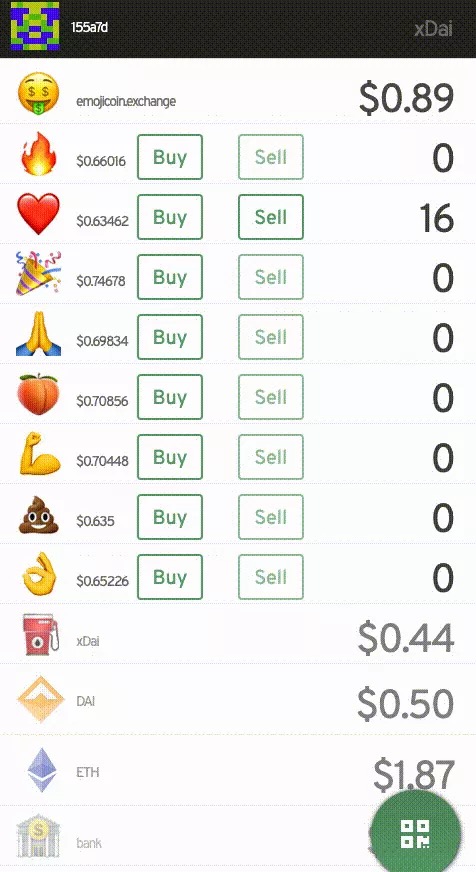 In order to win, players need to keep buying and selling when prices fluctuate.

Shit-coins, point to Sell or Buy. Players can also click the "Exchange" button to freely transfer these junk coins, or cash them out at any time (converted to xDai). This process is really interesting. You can see it from the smart contract.

The price of shit-coins depends entirely on the average of the random hash values ​​of the block mining. 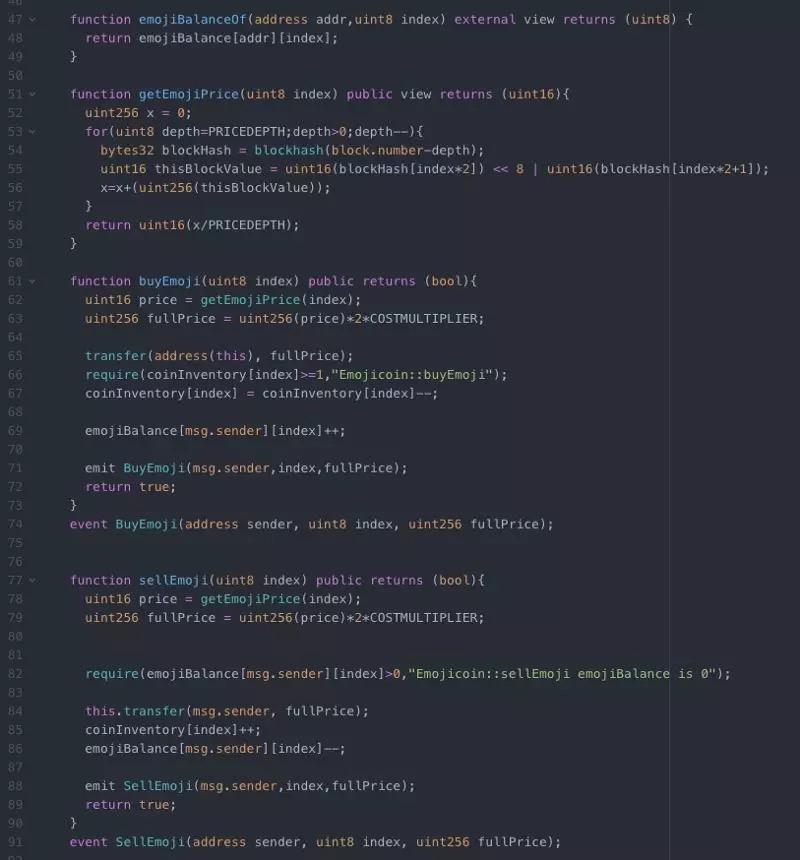 Once people suddenly have some cash-like things in their pockets, they will find a way to use it.

This experiment is a perfect combination of the use of cryptocurrency and the fun of games. It is not so much a financial product, it is more like a game task. The player’s goal is to bankrupt the official bank holding xDai and get it through the transaction.

Shit- coins are exchanged for cash. In this process, as shown in the figure below, the average hourly trading volume exceeds 1,000.

In less than 24 hours, the bank went bankrupt. At this point, the player replaces the coins he earned with xDai. In this 24-hour game, the students conducted a total of 22,764 transactions. There are even people who have programmed themselves to write a script to automate transactions. If we subtract the accounts that run the script, there will still be an astonishing 6,000 transactions that are manually sent to the smart contract. This is done by less than 40 students on a mobile phone within one day. One hypothesis that this experiment wants to explore is: "Once people suddenly have something cash-like in their pockets, they will find a way to use it." The use here also includes "hype." The speculative coin seems to be human instinct, does not need to be taught, it will be born, the only problem is that there is no opportunity and tools to speculate. At the same time, paper wallets are also an attempt to explore on-boarding issues. To make a lot of users who have never heard of the blockchain have their own first wallet, the middle steps are very cumbersome, and there are countless links that are likely to cause user loss. Paper wallet is a very convenient means. For many people who don't want to make money and just want to experience Dapp, a thing like a paper wallet is acceptable. Anyway, it will only invest a little bit of money.

In this scenario, "fun" and "convenience" may outweigh "security." In addition, with this expression pack trading experiment, Griffith is also exploring the possibility of other application scenarios of Burner wallet, in order to see if the wallet can be combined with smart contracts to achieve more interesting in addition to sending and receiving tokens. Interaction. For example, can Burner Wallet be an entry point for decentralized app/game developers to attract new users? Burner Wallet first fired at the ETHDenver conference, which was the only way to pay for meals at the conference, with its minimalism, The brainless interactive experience captures everyone. Users only need to open the camera to scan the QR code, it will automatically jump to the wallet page, you can use it to consume. You don't need to download the app, you don't need to remember the words, and you have a user experience like WeChat payment. 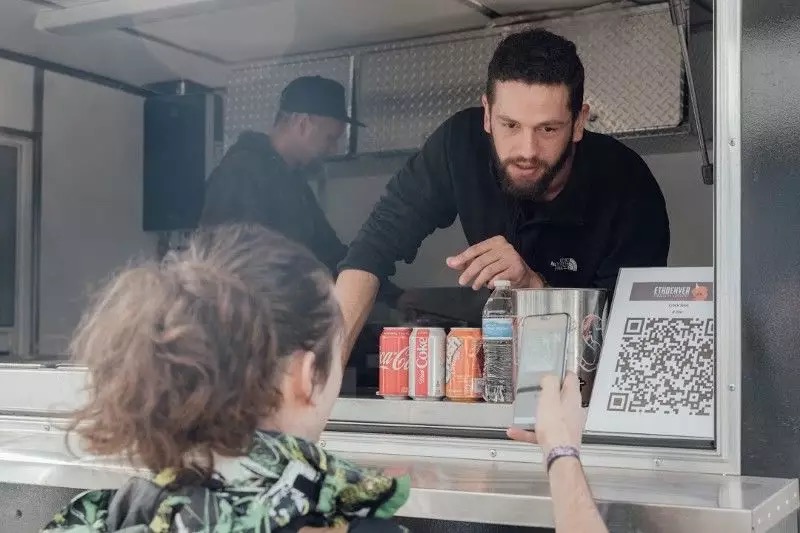 As Griffith said, he is constantly exploring other application scenarios. Griffith's little game this time is actually a "pre-dish" for the ongoing Ethereal online hackathon. He threw out the ideas of his own development and experiment at this stage, hoping to get more attention and collaboration from interested people, make more interesting products, and design some interesting little games based on Burner wallet to achieve faster Get the user. The small experiment of this garbage coin finally attracted some interested developers to participate. We may have really entered a time of distributed collaboration, you can participate in every good idea, and have the opportunity to work with better and more creative people to make a cool product. At the same time, if you have a good idea and have a planned plan or product prototype, you can write a blog to record the inspiration and process of the project, and then throw your thoughts into the community, which will attract more feelings. Interested people. At the end of the writing, I suddenly want to ask: If the Orange Book is also doing such an experiment to explore the on-boarding problem, let people who have never touched the blockchain try to "scramble the coin", would you want to participate?