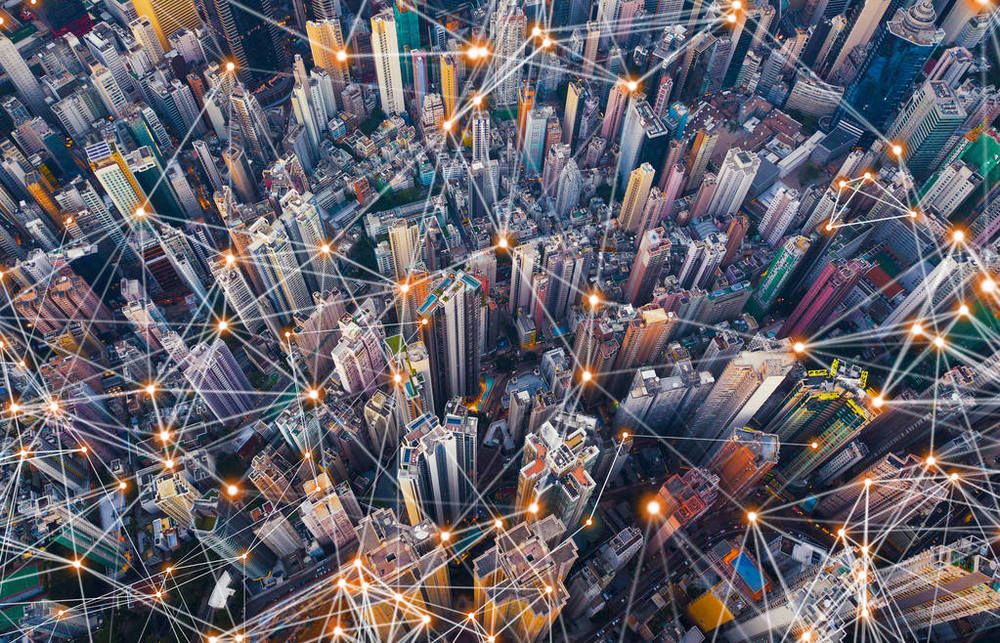 How does the blockchain industry view the past 2019? "2019 is the year when the blockchain will usher in a turnaround." On the first day of 2020, an article in the overseas edition of "People's Daily" wrote the opinions of many blockchain practitioners. In October 2019, a speech by the national leader made "blockchain" a hot word, and the trend started from then.

According to incomplete statistics from the People's Daily, as of early December 2019, a total of more than 40 blockchain-related guidelines were issued at the national level.

Outside the central government, local governments are not far behind in blockchain support. They have provided various policy subsidies and financial support, and the construction of industrial parks is also in full swing.

It is foreseeable that 2020 will be a year of great development for the blockchain.

On the evening of November 21, 2019, Hangzhou City was brightly lit.

The high-rise buildings on both sides of the Qiantang River staged a grand real-life light show to celebrate the landing of Hangzhou-based local company Jia Nan Yunzhi on NASDAQ—the successful listing in the United States made Jia Nan a "global blockchain First share ". In fact, Hangzhou is not the birthplace of Jia Nan. In 2013, Zhang Nanzhang, who was still studying at Beihang University, successfully developed the world's first ASIC mining chip. Later, he founded Jia Nan Yun Zhi in Zhongguancun, Beijing.

The good times didn't last long, bitcoin ushered in a trough in 2014, and the industry almost went cold. Established only a year ago, Jia Nan Yunzhi fell into a loss and even was on the verge of bankruptcy.

The original mining machine chip business was left unattended. Zhang Nangeng and several partners were looking for financing everywhere, but they hit the wall one by one. Turning corners, a turnaround appeared.

Hangzhou Branch of Tsinghua Yangtze River Delta Research Institute came to your door. This is an investment incubation institution jointly established by the Zhejiang Tsinghua Yangtze River Delta Research Institute and the people's governments of Hangzhou and Jianggan Districts. It took a fancy to the technology research and development capabilities of the Jia Nan Yun Zhi team, and led a investment of 2.5 million yuan to support it.

As one of the provinces that first noticed the blockchain industry in China, as early as December 2016, Zhejiang issued "Several Opinions on Promoting the Construction of the Qiantang River Financial Harbor", building agglomeration space, and effectively gathering blockchain and other financial technologies. Business.

And Hangzhou is one of the earliest cities in China to deploy blockchain.

The support and guidance of local policies have brought about the large-scale growth of blockchain companies.

“This is a blessed land. The policy and entrepreneurial environment is very good. The 4,000 square meter office space in Qianjiang New City has saved us two years of rent.” In November 2019, Wang Lideng, the director of the brand department of Jianan Yunzhi, accepted the “Hangzhou Daily” 》 Said in the interview.

An open policy and a strong blockchain entrepreneurial atmosphere have made Jia Nan Yunzhi and other companies in it be like a fish.

"There is a big obstacle in the development of the entire blockchain industry, and that is the lack of high-end talents." Said Chen Chun, a professor at Zhejiang University and a member of the Chinese Academy of Engineering.

As early as 2017, in order to attract high-end talent projects to settle in Qingdao, Zeng Hao provided a subsidy of 100 million yuan, setting off a "academic battle for academicians" between cities. Dalian, Zhengzhou, Guangzhou and other places have also launched the "100 million yuan to attract talent" plan.

After the launch of the "100 million yuan talent acquisition plan" in Qingdao, the two major projects of Qingdao International Academician Port and Qingdao Chain Bay began to surface.

As of May 2019, 53 academicians from various countries around the world have signed contracts with Qingdao International Academician Port.

Among them was Rong Chunming, a member of the Norwegian Academy of Engineering. What he brought is a blockchain-based digital asset security management platform project.

"The policy that Qingdao gave at that time was excellent. They were particularly thirsty for high-end talents. Many academicians can get supportive investment of one to two hundred million as long as they really come to Qingdao for projects." Wang Tenghe told a blockchain.

Compared with the Haina Baichuan of Qingdao International Academician Port, Qingdao Chain Bay is more specific and vertical to the blockchain field. In the early stages of construction, Qingdao Chain Bay benchmarked Silicon Valley in the United States and tried to become a gathering place for high-end blockchain talents.

Obviously, Qingdao is not alone in the introduction of talent. Housing subsidies, research funding, talented apartments, training incubation … In order to attract talents, governments across China have made every effort and a war has begun.

In October 2018, Changsha issued a policy for high-level talents in the blockchain. In addition to enjoying the treatment stipulated in the "Changsha Talents New Deal 22", the latter can also receive up to 1 million yuan of supporting rewards.

In addition, for high-level talents in the blockchain, Guangzhou will also arrange for priority accommodation in talent apartments, and give a rental subsidy of 3,000 yuan per person per month.

"At present, in terms of the number of industrial parks and related policies, Guangzhou and Hangzhou are at the forefront of the country." Wang Tenghe said.

While witnessing the talent war, the blockchain industry is also looking forward to the release of industry standards.

On December 20, 2019, the Talent Exchange Center of the Ministry of Industry and Information Technology issued the "Requirements for Talent Capabilities of the Blockchain Industry". This is the first authoritative standard in the field of domestic blockchain job capability.

More than a month before this standard was released, Zhilian recruited and released the 2019 Blockchain Talent Supply and Demand and Development Report.

In terms of talent supply and demand, the report shows that in the third quarter of 2019, the number of blockchain-related job seekers was still 7.12 times the number of recruiters, but the stock of talents with the corresponding knowledge structure and work experience is still relatively small.

In other words, in this field, real high-end talent is still in short supply.

In terms of talent compensation, the report shows that in the past two years, the average salary in the blockchain field has fluctuated around 16,000 yuan / month, which is nearly twice the national average salary level. Blockchain talents are still the sweet spot in the entire job market.

The report also shows that among the top 10 positions in the number of blockchain recruits, except for the "partner" average recruitment salary tops the list, most high-paying positions are senior software engineers and other technical posts, with an average salary of 23,606 yuan / month.

In his view, the vast majority of technical talents in the blockchain industry come from the Internet industry, and areas where the Internet is developed are basically first-tier cities.

Taking Beishang, Guangshen as an example, the report shows that in the distribution of blockchain recruitment demand cities in the third quarter of 2019, Shenzhen led by 21.07%, but in terms of talent stock, Beijing accounted for 28.88%. Than ranked first.

This is still the case in first-tier cities, and the problems in second- and third-tier cities are even more serious. Where talents come from has become the latter's urgent problem.

This also means that the battle for talents will be more intense.

A report recently released by "Wu Xiaobo Channel" shows that blockchain job seekers are more likely to find jobs in new first-tier and second-tier cities such as Suzhou, Changsha, and Hangzhou, because these areas have industrial parks and talent introduction policies.

"The entry of the regular army of the blockchain ministries, local governments, central enterprises, and state-owned enterprises will increase the welfare of blockchain practitioners," said Wang Tenghe.

In 2020, with the acceleration of the industry reshuffle, the blockchain talent market will be more prosperous.

Nomura Holdings Executive Director: If customers have a need, then they must master and utilize blockchain technology