In the new wave of digital economy upgrading, the competition in the blockchain highlands is intensifying.

On January 8th, at the 2020 ICT Industry Trends Annual Conference, Yan Binfeng, director of the Terminal and Smart Card Research Center of China Unicom Research Institute, emphasized that the combination of 5G and blockchain will promote industrial upgrading.

China Mobile Vice President Li Huizhen also publicly stated at the first Blockchain Service Network Partner Conference held in December that he will fully promote the deployment of BSN blockchain networks and make full use of 5G, Internet of Things and dedicated line resources to safeguard the blockchain industry Data collection and transmission.

As early as July 2018, Research and Markets, a global market research institution, predicted that the telecommunications blockchain industry will reach an output value of nearly $ 1 billion in five years .

In fact, in promoting the implementation and application of blockchain technology, telecom operators have become a key force like financial institutions. They not only have the urgency of business transformation, but also have natural advantages of basic resources.

2020 is destined to be an extraordinary year for the communications industry.

The 5G commercial curtain has opened, AI penetrates into all industries, the Internet of Everything is accelerating, and the terminal industry's product form, applications, channels, users, and ecology are facing new changes and challenges. Integration and exploration of blockchain, Internet of Things and 5G It is urgent to integrate applications and open new doors of opportunity.

Scallion hereby combed the exploration of the three major domestic operators in the field of "telecommunications + blockchain". Facts have proved that in the past two years, especially in 2019, the three major domestic operators have significantly accelerated the pace of blockchain technology research and blockchain application practice, and have now penetrated into multiple business areas of internal management and external applications. In addition to jointly promoting the standardized construction of the blockchain and the establishment of the underlying technical facilities, the layout of various operators is gradually showing different focuses .

Note: The Blockchain-based Service Network (BSN) is the first national-level alliance chain. It is planned by the top level of the National Information Center and is jointly launched by multiple companies across the public network, across regions, and across institutions. Blockchain service infrastructure.

It is reported that the Blockchain Service Network (BSN) will be officially launched for commercial operation in April 2020. From October 2019 to March 2020 is the beta period of the network, which is open to 400 enterprises and 600 developers for free Beta. At the same time, the BSN Development Alliance also officially launched a two-month BSN developer contest with the theme of "Traditional Information System Chain Reform Program" in December 2019, attracting developers.

On the emerging track of blockchain, it seems that the cooperation of operators is the general trend, and BSN provides a good opportunity for the three to cooperate in depth.

According to Tan Min, Secretary-General of the BSN Development Alliance, BSN aims to change the current high-cost problem of the LAN architecture applied by the alliance chain. Relying on existing network resources and data centers in various provinces and cities, urban public nodes throughout the country have been established. Node deployment) to form a blockchain service platform serving the whole country, thereby reducing the development, deployment, operation and maintenance, interoperability and supervision costs of blockchain applications.

It can be seen that BSN is a platform for close cooperation between operators and the blockchain industry, which helps the joint industrial chain to explore the application value of blockchain in digital assets, telecommunications assets, and new-generation network construction.

Operators who have a large amount of user data, and jointly build a blockchain-based identity recognition system will be a major breakthrough in blockchain applications. In the long run, it may bring about drastic changes in the online Internet ecosystem.

"If we are stuck with chips by others, then we are indistinguishable from the United States in the field of blockchain." Liang Wei, head of China Telecom's blockchain business R & D, expressed full confidence in China's seizure of blockchain highlands.

Directors of each exhibition: Exploring the convergence point of telecommunication business and blockchain technology

Behind the three major operators working together to enter the blockchain is a sufficiently large market, and in this huge market, each operator has its own focus. Different from China Mobile's efforts to explore the underlying infrastructure of the blockchain, China Telecom actively participates in the standardized construction of the blockchain industry on the one hand, and vigorously promotes the exploration of new services based on the blockchain and the innovation in application Practice is more prominent.

At the Wuzhen World Blockchain Conference in November 2019, Zhao Jun, the head of China Telecom's blockchain technology, said that operators were "forced" to engage in blockchain. Previously, they only provided cheap underlying infrastructure and achieved success. Companies that provide Internet applications now have the spring of their operators. They want to break the monopoly traffic pattern of "BAT" through network resources and terminal advantages, and upgrade from "low-level pipeline providers" to "value traffic entrances" for customers .

China Telecom not only proposed the first ITU-T international standard for blockchain in 2017, but also used blockchain SIM cards (dSIM), electronic bidding based on blockchain, inter-provincial settlement based on blockchain, Based on the blockchain's trusted traceability, intelligent sorting, automatic sorting, automatic guidance, and drone distribution, etc., they have explored and practiced innovative businesses, actively trying to rely on emerging blockchain technologies to explore telecommunications and blockchain. Integrate the development of new businesses and create a value flow entrance. 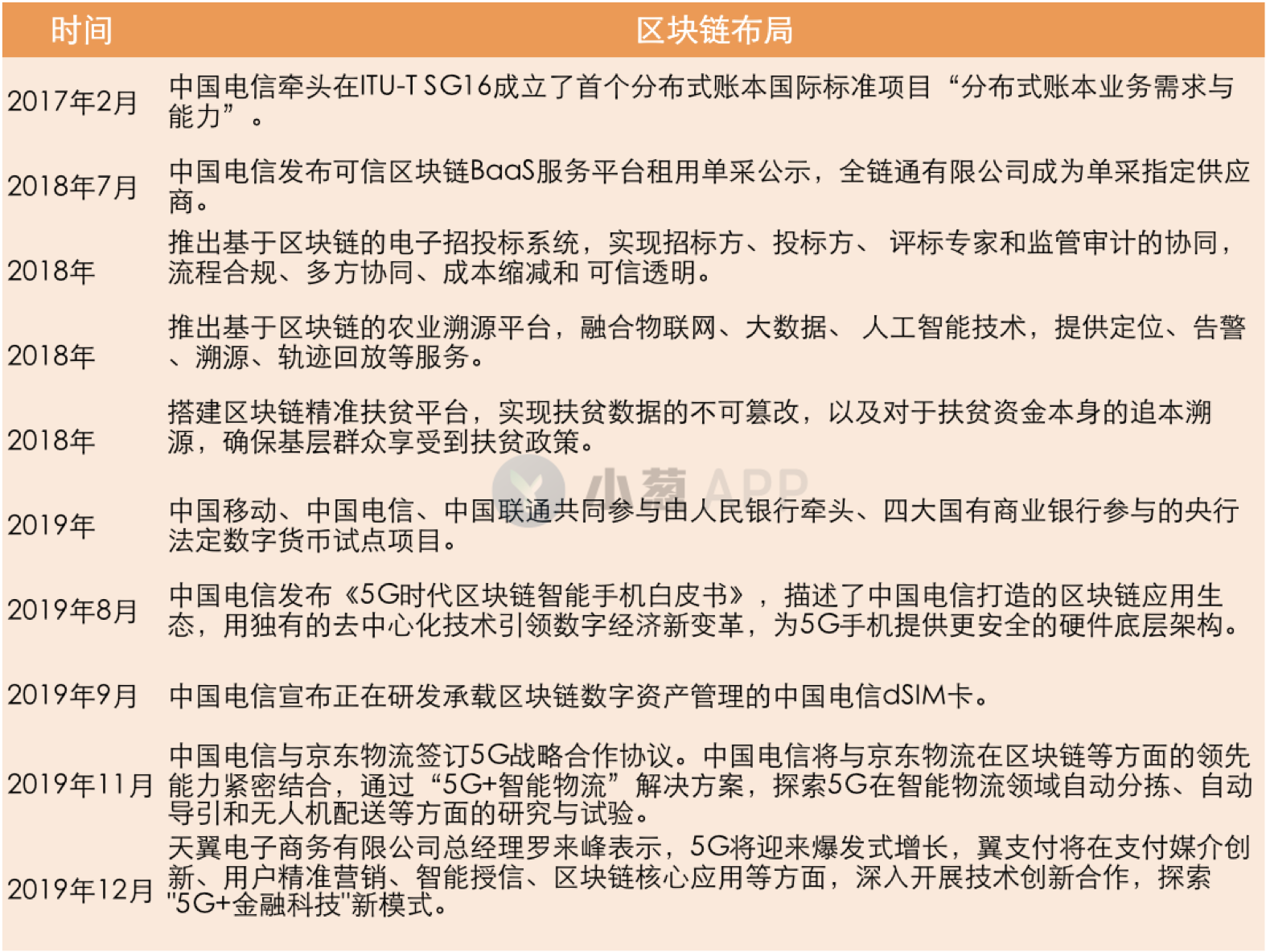 China Mobile: Focusing on the "capacity" of the blockchain and cooperating with industry partners to build a blockchain underlying service platform

In November 2019, Huang Yuhong, deputy dean of China Mobile Research Institute, clearly stated at the "5G Cooperative Innovation Summit" that "capability" is the essence of China Mobile's blockchain. In the development of the blockchain, China Mobile hopes to build a platform, build a set of blockchain capability system, reduce the threshold of blockchain technology, and help enterprises develop related applications more easily.

The threshold of blockchain technology is high, and direct application development is difficult. "Capability" is the fundamental requirement for the application and promotion of blockchain technology. The bottom of China Mobile's blockchain capability system is the connection capability based on BSN. At the same time, a service platform for blockchain is established. Based on the combination of CBaaaS business capability and 5G, it provides a high-level application with a service integration interface of trust + information , Thereby providing the platform capabilities of the blockchain, thereby promoting the development of the shared economy from the Internet of Things to digital finance to social livelihood, e-government and smart cities. "

To this end, China Mobile has done a lot of accumulation and layout in the early stage. 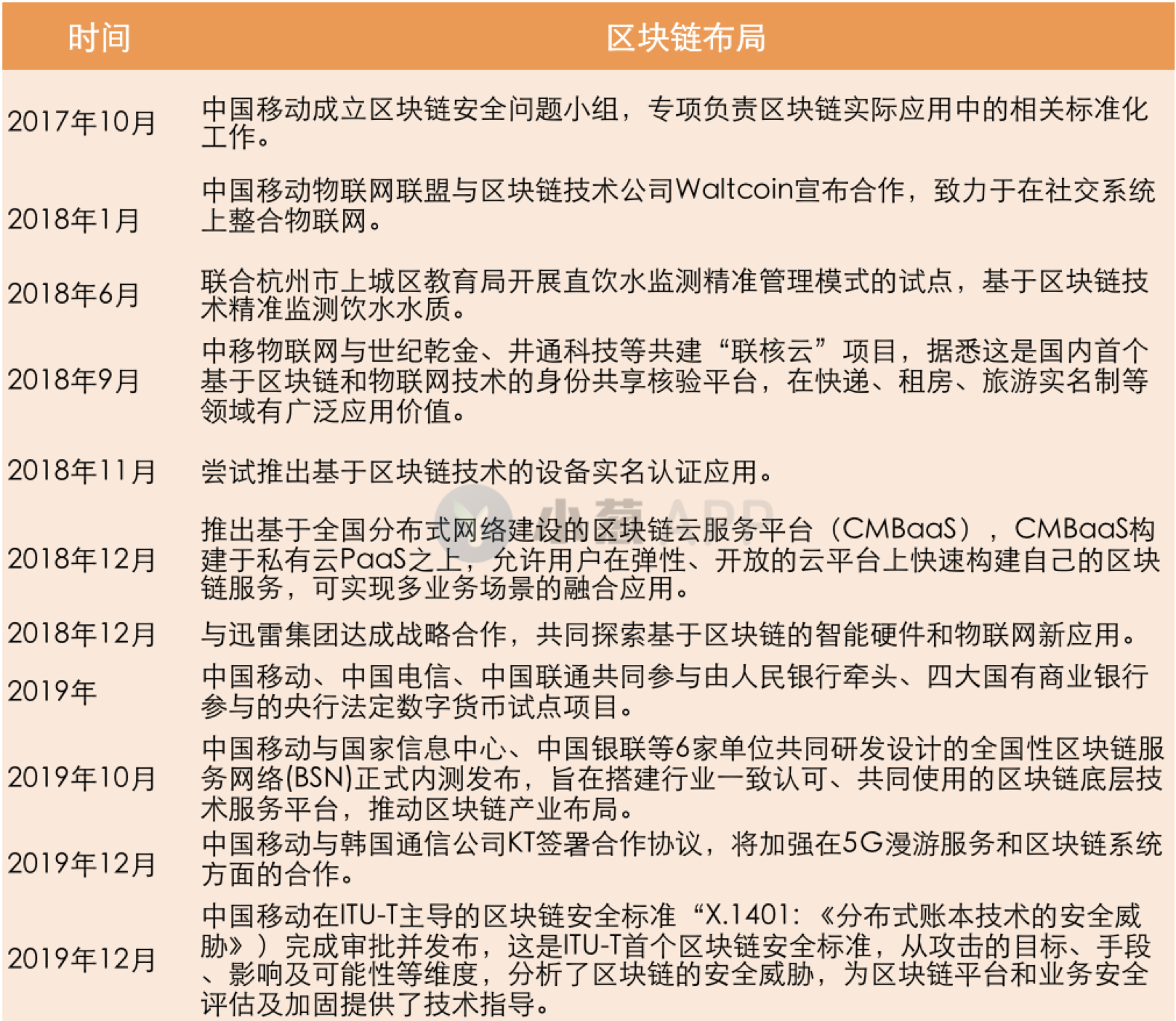 Among them, the National Information Center (affiliated to the Development and Reform Commission) conducts top-level planning, and China UnionPay and China Mobile use relevant blockchain technology and existing network resources and data centers to conduct independent research and development and deployment. 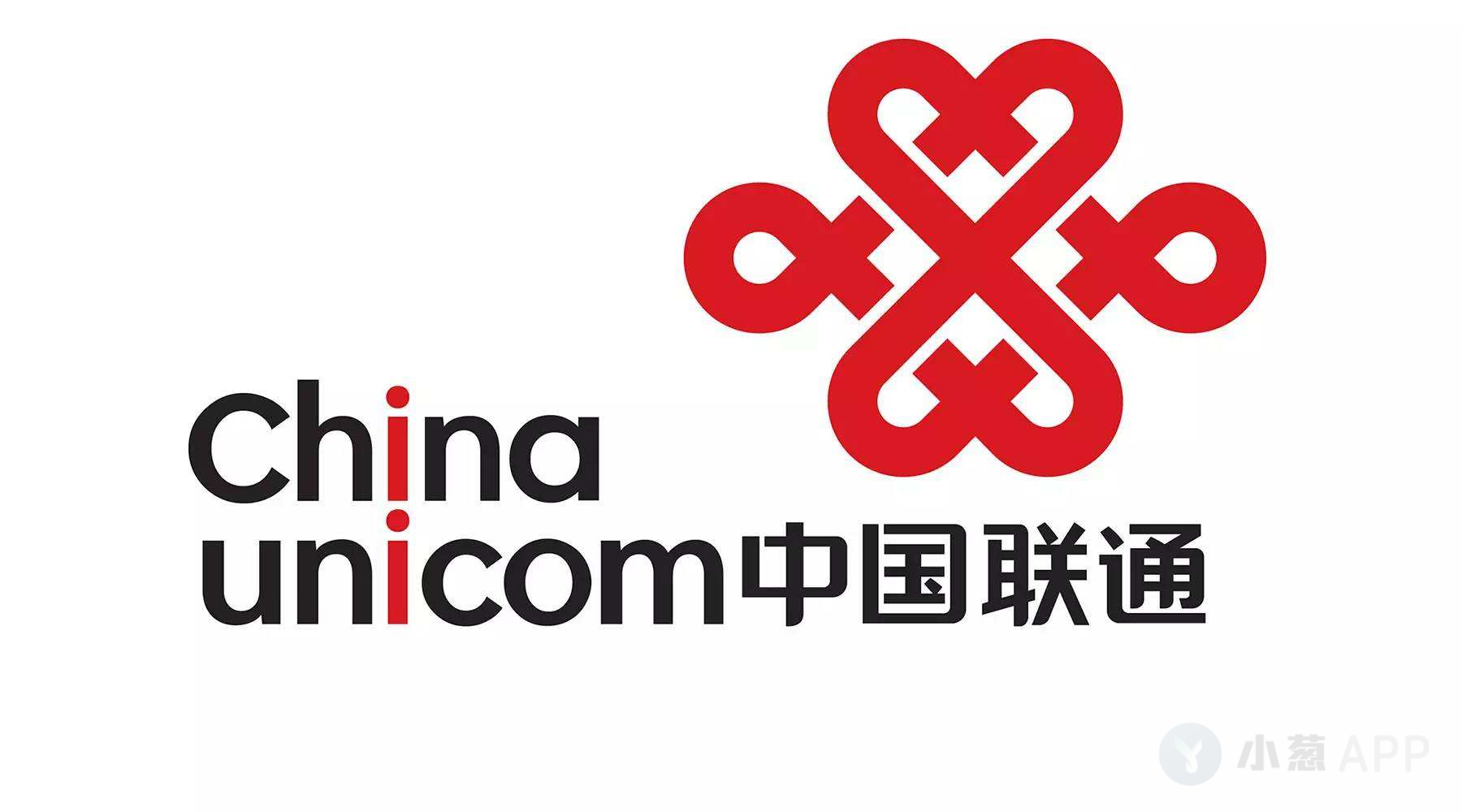 China Unicom's exploration in the field of blockchain has three major blocks.

One is to actively promote the construction of international standardization such as blockchain and the Internet of Things.

China Unicom has made great achievements in promoting and formulating international and domestic projects and standards related to blockchain security and the Internet of Things blockchain.

Not only led the completion of the ITU-T's first IoT blockchain international standard project BOT, but also promoted the establishment of the ITU-T Distributed Ledger Application Focus Group to participate in the preparation of the blockchain security standard "Trusted Blockchain-Block Chain security evaluation index "and other standards.

At the ninth plenary session of the ITU-T SG20 in December 2019, it cooperated with ZTE, China Academy of Information and Communications Technology, China Information and Communication Technology Corporation, South Korea ETRI, etc., led and jointly led 7 ITU "Internet of Things Zones" "Blockchain" series of international standard projects is an important force to promote the development of industry standards in the "Internet of Things Blockchain" field and the mutual transformation of international standards and industry standards.

The second is the deep accumulation of patent layout.

Tang Xiongyan, chief scientist of China Unicom's Network Research Institute, said in an interview that "China Unicom expands from internal management to external industry applications based on the technical characteristics of blockchain, and explores the use of blockchain to transform the communication network system and promote the blockchain Progressive development of the industry. "

In terms of external applications , efforts are being made to explore the integration of blockchain in medical insurance, courts, the Internet of Things, animal husbandry and other fields.

In October 2018, James Crawshaw, a senior analyst at Heavy Reading, a well-known consulting firm, predicted that blockchain technology will be widely used by telecommunications operators in the next few years, and mainly in fraud management, identity management and IoT connectivity Key areas are promising.

Practice has proved that these areas are within the scope of several operators' innovative business priorities. Based on the monopoly characteristics of the giants in the telecommunications industry, it promotes the innovation and development of the entire industry. From the formulation and implementation of standards to large-scale application practices, it naturally depends on the core strength of the telecommunications giants and official institutions.

But in general, the layout of the three major domestic operator giants on the blockchain is still in the stage of technology accumulation, market cultivation and application exploration, and there is still a long way to go before the real explosion of blockchain energy.

Blockchain technology is a new opportunity and a huge challenge for telecom operators.

From the perception of everything and the interconnection of everything to the intelligence and the mutual trust of everything, I believe that with the accelerated integration of blockchain technology with emerging technologies such as the Internet of Things and AI, the telecommunications industry will bring a brand new user experience and business model.

The report shows that the blockchain will grow to 2023, which will bring about 3.6 trillion market size increments.