Not long ago, Bitcoin celebrated its 11th birthday. Whether you are a supporter or opponent of Bitcoin, you cannot deny the fact that Bitcoin is extremely successful. In 11 years, Bitcoin has grown from scratch and still maintains a market value of $ 130 billion.

This success of Bitcoin, especially its subversive side, attracted many attacks and criticisms in the 2010s. Even though many attacks are baseless, these misconceptions often revolve around Bitcoin.

Unfortunately, these rumors that should not exist have misled the image of Bitcoin in people's hearts. In the following, I will tell you the 9 most common misconceptions about Bitcoin based on facts.

Myth 1: Bitcoin is a Ponzi scheme

Since its birth, Bitcoin has often been criticized by critics as a Ponzi scheme. On the last day of 2019, Tendayi, the chief economist at LendingTree, the largest online lending market in the United States, wanted to be famous, and he announced:

"I believe that Bitcoin is just a pyramid scheme. You can only make money by those who come in later."

This kind of attack is not new, and when economists or politicians can't find other reasons to oppose Bitcoin, they will sing these old tunes.

Now, to end this rumor, I suggest you refer to the detailed report of the Ponzi scheme issued by the World Bank in 2014.

This report was written by Kosik Basu, a former chief economist at the World Bank and a professor of economics at Cornell University. In his report, he specifically stated:

Contrary to popular belief, Bitcoin is not a Ponzi scheme. If you think so, it proves that you still need to learn.

In retrospect, the main value of Bitcoin may be the experience it provides central banks in terms of the prospect of electronic money and how to improve efficiency and reduce transaction costs.

At this point, I don't think there is anything to add. Looking at Kosik Basu's report, everything is clear.

Those who still consider Bitcoin to be a Ponzi scheme in 2020 are obviously misled and you should not waste time with them.

Myth 2: Bitcoin is a speculative bubble

In the early days of Bitcoin, few people were interested in it. Later, bit by bit convinced more and more people that it proved that bitcoin is not just a few geeky tech products.

This revolution that Bitcoin is undergoing is far more profound than we think, and it is likely to have a huge impact on the world in the next few years.

When the price of Bitcoin rose above $ 1,000, more and more people felt the threat posed by Bitcoin and began to attack it, claiming that Bitcoin was just a speculative bubble.

Later, bitcoin was compared with the tulip bubble that raged in the Netherlands from 1636 to 1637 or the Internet bubble at the beginning of this century.

Indeed, some people only see Bitcoin as a new type of speculative tool to make huge profits.

This profound misunderstanding of Bitcoin's true potential does not mean that Bitcoin is a bubble.

Indeed, we live in a world where more and more people are driven by greed.

But this has nothing to do with Bitcoin, which itself is not a bubble.

These greedy people gave birth to the speculative bubble at the end of 2017, and their departure from nothing resulted in the burst of the bubble in 2018.

The bursting of this bubble allowed Bitcoin to purge those who did not believe in Bitcoin. Since then, Bitcoin has begun to move forward again and rise again, stronger than ever.

Myth 3: Bitcoin is not secure

From economists and central bankers to politicians, Bitcoin critics have been saying that it is not truly secure. To justify this allegation, they point out that Bitcoin has been hacked many times in its history.

Bitcoin is a very secure open source software, and the developer community is constantly improving it. Critics of Bitcoin equate Bitcoin's security with the security of cryptocurrency exchanges. And these two are two different things.

Since 2010, many exchanges have indeed been hacked. One of the most famous hacking incidents was Mt. Gox, which became a scandal outside the small Bitcoin world in 2014.

But Bitcoin has never been successfully attacked by hackers.

Although Bitcoin does have some software defects in its history, the most famous of which is the "value overflow incident" that occurred on August 15, 2010. This event highlights the power of the Bitcoin developer community , because an upgraded version of the Bitcoin blockchain was released within 5 hours of the event. This misunderstanding is not self-defeating in the face of reality.

Myth 4: Bitcoin is too complicated to use

Bitcoin is a "point-to-point electronic cash system" that uses the concept of blockchain. It can work without a centralized authority and is also based on a public / private encryption key system, which is quite complicated for novices.

Critics use the complexity of Bitcoin's core technology to argue that Bitcoin is too complicated for the general public.

However, in order to use Bitcoin in your daily life, you don't need to master all the concepts at all. There are many tools that make it easy to use, starting with intuitive wallets, web and mobile applications.

In 2020, trading with Bitcoin is as simple as sending an email. Bitcoin is a misunderstanding of the complexity of the general public, as they do not have to fully grasp the concepts at the core of their technology.

Rulers of countries do not like Bitcoin because it is opaque. According to them, what you do on the Bitcoin blockchain is not visible to everyone.

Nothing is more untrue than that. Bitcoin is an open blockchain, and all transactions since the birth of Bitcoin in 2009 can be read by everyone.

In fact, no currency has such high transparency as Bitcoin.

If Bitcoin is opaque, you can only say that you are as ignorant of how Bitcoin works as those of the most fierce critics.

On the other hand, users can conduct anonymous transactions as long as they do not disclose the address used for the transaction.

Finally, it should be noted that the Bitcoin source code is provided to everyone for free, which ensures that everything the Bitcoin blockchain does at runtime is transparent.

With the price of Bitcoin soaring at the end of 2017, many banks are increasingly criticizing Bitcoin. According to the world's major banks, Bitcoin facilitates money laundering.

However, Bitcoin is not specifically designed for money laundering. Several studies conducted in 2018 showed that the risk of using Bitcoin to launder money is minimal.

I would also like to point out that in the past few years, many banks have had money laundering scandals.

Danske Bank in Denmark, for example, was recently accused of laundering more than $ 300 billion in the 2000s.

When you hear someone blaming Bitcoin for facilitating dirty money laundering, I hope you understand why they made such a criticism.

In most cases, you will understand that most of these people just want to point their fingers at competitors to divert people's attention from them.

In the camp that criticized Bitcoin, some of the more moderate people realized its value, but believed that Bitcoin was only a means of value storage.

Over the years, Bitcoin has proven its worth.

It is no coincidence that Bitcoin is called digital gold. As bitcoin is increasingly supported by businesses around the world, this misunderstanding will gradually disappear.

In my opinion, Bitcoin will accelerate to become a payment method for merchants by 2020.

It turns out that in France, which is still one of the world's largest economic powers, Bitcoin should be able to be supported by more than 25,000 points of sale by 40 large retailers by the end of this year.

Slowly, the usage of Bitcoin will increase, and its use as a payment method will increase. In addition, in the next few years, the rise of Lightning Network will promote its use as a means of exchange because it can meet the needs of extremely low transaction fees and fast transactions.

Bitcoin's first step is to prove itself as a store of value. It has done it, and the next step is to move to large-scale means of exchange and payment.

Myth 8: Bitcoin is the enemy of ecology

Bitcoin has never lacked the voice of attack, and its opponents have pointed out its high energy consumption.

In fact, protecting the security of the Bitcoin blockchain does require a lot of power. Because the core of Bitcoin mining is the POW mechanism, it is a computationally intensive algorithm.

First of all , I must tell you that the power required to generate new Bitcoins makes Bitcoins even more valuable.

Second, a recent study by Susanna Kohler and Massimo Pizzol of the University of Aalborg in Denmark shows that previous calculations of the environmental impact of Bitcoin were based entirely on false assumptions.

As part of their research, they performed more accurate calculations, and the results showed that Bitcoin's CO2 emissions were much lower than previously expected.

In fact, Bitcoin's impact on the environment will not be as severe as its opponents say. Moreover, most of the electricity consumed by Bitcoin mining actually comes from renewable energy sources. From this point on, Bitcoin may eventually be considered compatible with the fight against global warming.

This misunderstanding exists only for a little over two years. Many investors entered the bitcoin world at the end of 2017, when the price of bitcoin reached an all-time high of $ 20,000.

These people are now extremely dissatisfied with Bitcoin and continue to reiterate that the price of Bitcoin is stagnating. Listening to them can even become boring.

To unravel this misconception, you can take a look at the evolution of the lowest annual price of Bitcoin: 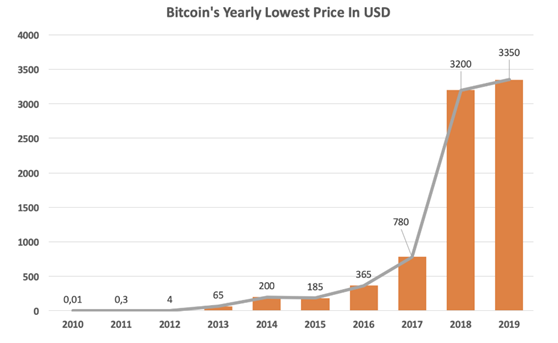 Since its birth in 2009, Bitcoin has been declared dead 380 times. In addition to these recurring obituaries, people who have benefited from the current currency and financial system have also been wrongly criticizing it, leaving Bitcoin with many misunderstandings and leaving them with a bad impression on the public.

This article has uncovered several important misunderstandings, and in the future you can solve them. This is important because to allow more ordinary people to accept Bitcoin, you need to better understand its technology and disruptive facts.