With the development of blockchain technology, decentralized applications (Dapps) have become a new trend, and Ethereum as the premier platform provides a basis for the expansion of such applications. Other smart contract platforms, such as EOS and Tron, have also entered the field and have been dubbed the "Ethereum Killer" notoriety.

Both EOS and Tron are working to expand their user base, but the technological advantages claimed by these Dapp platforms have not really helped them gain a user base comparable to Ethereum. Ethereum is not only the most popular Dapp platform, but also successfully cultivated various types of Dapps-DeFi, exchanges, games, high-risk gaming applications, and so on.

Although at the beginning of 2019, the spread of stablecoin was overwhelming, in the second half of 2019, attention was shifted around the paradigm caused by decentralized finance (an open, interoperable, programmable, and combinable open financial system). Wind direction.

As can be seen from Figure 1, after the slow start of Dapps in the first two years of 2015-2017, people's interest in the crypto market began to surge in the second half of 2017. And in the long bear market that cryptocurrencies suffered in 2018, dapps still achieved continuous jump growth before December 2018, and then gradually declined in the next six months.

Since June 2019, the development of Dapps has accelerated again, but it is still far below the level at the end of 2018. Although the decline in Dapps adoption continues, it is generally optimistic that in the new Internet environment with blockchain technology as the infrastructure, the Dapps market will return to a longer upward trend. However, the current market size is still too small to predict exactly when this will happen. 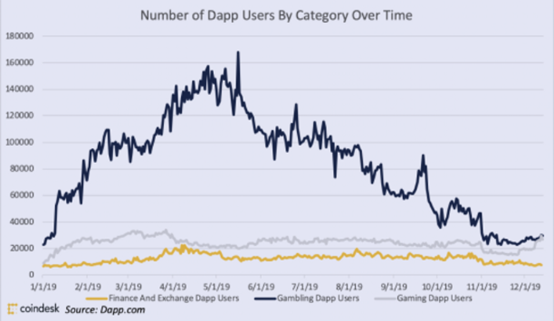 From other micro-trends, as of the end of last year (2019), the number of Dapps users in the three major application categories of DeFi, gaming and games has also dropped to the lowest point of the year (Figure 2). In a broad sense, the main growth of the DeFi app comes from Ethereum. According to Dapp.com statistics, Ethereum accounts for 75% of such applications, followed by EOS, which accounts for 11%.

Growth of Dapp users on Ethereum: 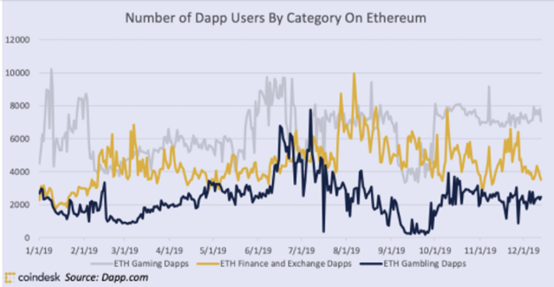 Since Ethereum is the most popular Dapp platform, let's review the match between its Dapp users and the overall user in the past year (Figure 3). The gaming sector on the Ethereum platform is still the most popular part of users, and the weakening of user interest in the late summer has prompted a healthy rebound in data later in the year.

DeFi Dapp is the second most popular segment for users, but it showed significant weakness towards the end of the year. Ethereum gaming Dapps have the lowest user attention, although it does have some growth in the end. In addition, according to data from DappRadar, the number of active wallets in the Ethereum Dapp ecosystem increased by 118%, and the daily turnover in USD terms increased by 166%.

The report also showed that the number of active users on Dapp decreased from 110,000 in May to 41,000 in early December, a decrease of 62%. And the number of weekly active Dapps on the counted 10 blockchain platforms dropped from 529 to 370. This trend can be clearly seen from the above chart, especially at the end of 2019 (Figure 4).

Current trends indicate that the Dapp ecosystem is struggling with most of the activity generated by a few platforms, most notably Ethereum, Tron, and EOS. Development and innovation are also limited to a few use cases. Maybe the industry needs more time to expand its focus to get wider adoption and better operations.

The original source is Medium. The translation is provided by First.VIP . Please retain the information at the end of the article.

North American investors are running at a premium of 28%, and the timing of entry into Bitcoin at the end of July?