In 2019, which lasted a bear market for a whole year, a large number of projects slowly dropped out of sight for various reasons. By crawling the data of DeadCoins.com, we found some quite interesting phenomena. At least from the above websites, the number of blockchain projects that died in 2019 has been significantly less than in 2018.

The way in which the project died is similar in 2018 and 2019. We have also conducted an in-depth analysis of the causes of the project's death. In the whole of 2019, the number of projects that died in the first quarter was the largest. The number of projects that died in January, February, and March were 115, 48, and 120, accounting for more than half of the total annual deaths. In the second quarter, 83 projects died. . This difference may be the result of broader market forces, with the price of Bitcoin and other crypto assets rising steadily throughout the second quarter. 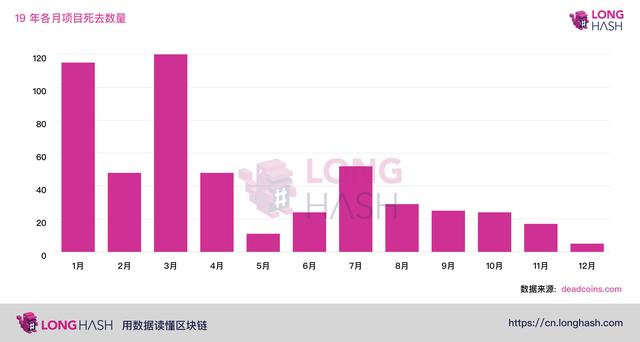 Deloitte's 2019 Global Blockchain Research Report shows that there will be more regular military enterprise-level blockchain projects in 2019, and the overall project quality will be one grade higher than in 2018.

Robinhood acknowledges that some users' password stocks and cryptocurrency trading platforms are stored in clear text.

The current number of unconfirmed transactions in Ethereum is 46,830