On January 7, NFCW news, the Bahamas Central Bank has begun to implement the electronic version of the Bahamian dollar currency, users can scan or code (a type of two-dimensional code) to make payments and transfers. Half a month earlier, the Bahamas released the "Sand Money Project: The Bahamas Modernization Initiative for Payment Systems" on December 24, 2019, which introduced the digital currency of the central bank in detail.

The Bahamas is one of the few countries in the world that has issued central bank digital currencies and is already in use.

At present, the national digital currencies / national cryptocurrencies in most countries and regions are still in the midst of sluggishness. However, according to some disclosed design details, the current development of national sovereign digital currencies has basically divided into two forks: to compete for the words of international governance The main goal is to promote economic development.

The earliest sovereign digital currency launched was Venezuela's Petro. In 2018, a white paper, Petro: Towards a Digital Economy Revolution, was released. Iran announced in February 2019 that it would issue Paymon. According to the two governments, the value anchor of both is a natural resource used as hard currency. However, it is worth noting that the Venezuelan government initially planned to support 5 billion barrels of oil as a cryptocurrency. At the same time, when it released the first white paper, it stated that Petro's anchor was pure oil, but then in the second white paper it changed to anchor a variety of natural resources-50% oil, 20% gold, 20% iron, diamond 10%. However, there are questions about whether Petro is actually used. On November 20, 2019, Reuters reported that despite recent Venezuelan officials promoting Petro, they have not been able to find evidence of petro's use in commercial transactions.

Compared to Venezuela Petro, Iran's anchored gold Paymon is considered to have sufficient gold reserves to support or survive. On February 5, 2019, the Iranian authorities and the four banks of Parsian, Pasargad, Melli Iran, and Mellat jointly announced that they will issue digital tokens Paymon and PMN anchored in gold, and the total issued is expected to exceed one billion. According to Blockchain Land, the market demand for gold, as well as the demand for cryptocurrencies that anchor gold, may provide Iran's sovereign cryptocurrency with an advantage.

The Petro White Paper released by Venezuela states that Petro is a revolutionary project and its success is one of the goals of the Bolivar government. Through this project, it will generate economic revival income, promote the integration of Venezuela and the world's financial system and realize business Incentives, Petro will also become an effective financial exchange tool.

Same for Iran Paymon. Digital asset security company CipherTrace reports that the clear goal of this new virtual currency is to bypass global sanctions and create "an alternative currency zone beyond Western influence."

Based on the above goals, Petro and Paymon are also closer to the current native cryptocurrency in terms of use and transaction scenarios.

Iran's Paymon will trade in Fara Bourse, an over-the-counter trading venue in the future. The Iranian government has partnered with Kukonos to develop blockchain technology to support the transaction. Over-the-counter trading is unfavorable to regulate, but it helps the use of currency in international markets. Venezuela has designed a complete ecosystem for Petro, including websites, wallets, exchanges, public payment systems and block browsers. Petro can be used in multiple scenarios, such as buying digital coins for Venezuelan goods and all their processing (final products); buying goods and services for specific uses throughout national and international territories; paying taxes and paying for public services; A novel system for the platform to send remittances; and reach people without a bank account. Shortly after Venezuela Petro went online, Trump issued an executive order on March 19, 2018: For Americans and U.S. territories, any digital currency issued by Venezuelan government or its representatives on or after January 9, 2018 is prohibited transaction. In addition, the mutual chain pulse retrieved the Iranian digital currency Paymon on the Google search engine. The latest news stayed in March last year, and the suspected release was blocked.

The digital Bahamian dollar that has just been put into use, and the digital currency of the People's Bank of China, which is being piloted, are "electronic" issuance of domestic fiat currencies, and both support offline payments.

At the current stage, the design of the central bank's digital currency DC / EP in China focuses on M0 substitution, but also to a certain extent as a substitute for cash. It is a debt of the central bank to the public. It is planned to be mainly used in high-frequency retail business scenarios.

The "Sand Money Project: Bahamas Payment System Modernization Initiative" shows that the electronic Bahamian dollar will be an identifiable liability of the Central Bank of the Bahamas, which is equivalent to paper currency in all respects. continue. The goal is to improve financial inclusiveness and accessibility, reduce discrimination, and enable domestic payment systems to more effectively access financial services.

Based on the original intention of the issuance, both are to provide more comprehensive financial services and improve the payment system. Therefore, the regulatory principles of the two are similar to a certain extent-they will not shake the existing fiat currency system and adopt a certain degree of centralized management. For example, China and the Bahamas have emphasized that digital currencies will not replace traditional deposits.

On August 10, 2019, Mu Changchun, deputy director of the Payment and Settlement Department of the People's Bank of China, publicly stated that in order to guide the central bank's digital currency to be used in small retail scenarios, it will not have a squeeze effect on deposits and avoid procyclical effects under arbitrage and pressure environments. , Transaction limits and balance limits will be set according to different levels of wallets. The Central Bank of the Bahamas will limit the amount of B $ instruments that individuals, businesses and other unregulated financial institutions can hold, so that the electronic Bahamian dollar cannot replace traditional bank deposits in practice.

Under the centralized management model, China and the Bahamas Central Bank have also delegated specific operating rights to digital currencies.

In the plan of the Central Bank of the Bahamas, non-bank payment service providers are also important co-builders, which are the main lead intermediaries; while the Central Bank monitors assets and sponsors centralized KYC / identity infrastructure; the government is expected to act as a participant and user and vigorously promote Adoption of digital payments.

In terms of technology implementation, China and the Bahamas also announced related plans. The central bank said that it will maintain technology neutrality, not pre-set technical routes, and adopt horse racing mechanisms in the market. Several development and operation agencies will adopt different technical routes, do DC / EP research and development, and finally leave the market to the fittest.

The Bahamas discloses more technical details and the work of technology vendors in its Sand Money Project: The Bahamas Payment System Modernization Initiative. It is reported that technology provider NZIA has tested and pre-installed some dedicated communication networks for the Sand Dollar Payments system. The Sand Dollar system will also use the existing public communication infrastructure to handle payment messaging over a standard Internet connection. 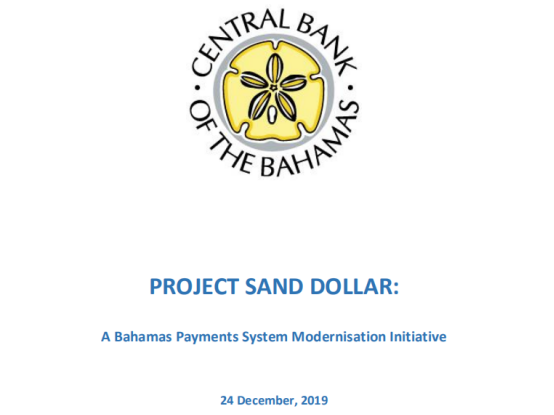 The electronic Bahamian dollar has entered the trial phase in Exuma in December 2019. In the experimental stage, various financial participating institutions will perform user wallet registration verification. At the same time, the World Bank and New Zealand International Bank will conduct intensive one-on-one dialogues and group discussions with financial institutions to find out their expectations for participating in the pilot. In addition, the Bahamas Central Bank plans to expand the pilot scope to Abaco in the first half of 2020.

From the design, application progress, and public opinion feedback of the digital currencies / cryptocurrencies of the four countries mentioned above, digital currencies are more suitable as trading tools at this stage to enhance the existing economic efficiency and promote the implementation of inclusive finance. It is too early to change the international political landscape.