Data Analysis | Compared with 10 years ago, what is the difference between Bitcoin and price?

Rising Bitcoin prices are both good and bad. Fortunately, it can encourage more individuals to join the Bitcoin network; the bad thing is that it makes people pay more and more attention to the single measure of "rising or falling", rather than Bitcoin itself. This standard also reduces a complex financial system to a bubble economy, making speculation the most important part.

Over the past decade, Satoshi Nakamoto's inventions have shown us that code can make a difference. When we pay attention to price all the time, we ignore the paradigm shift brought by Bitcoin.

Therefore, this article will show you some data that is often overlooked beyond the price. This article is mainly divided into three parts: 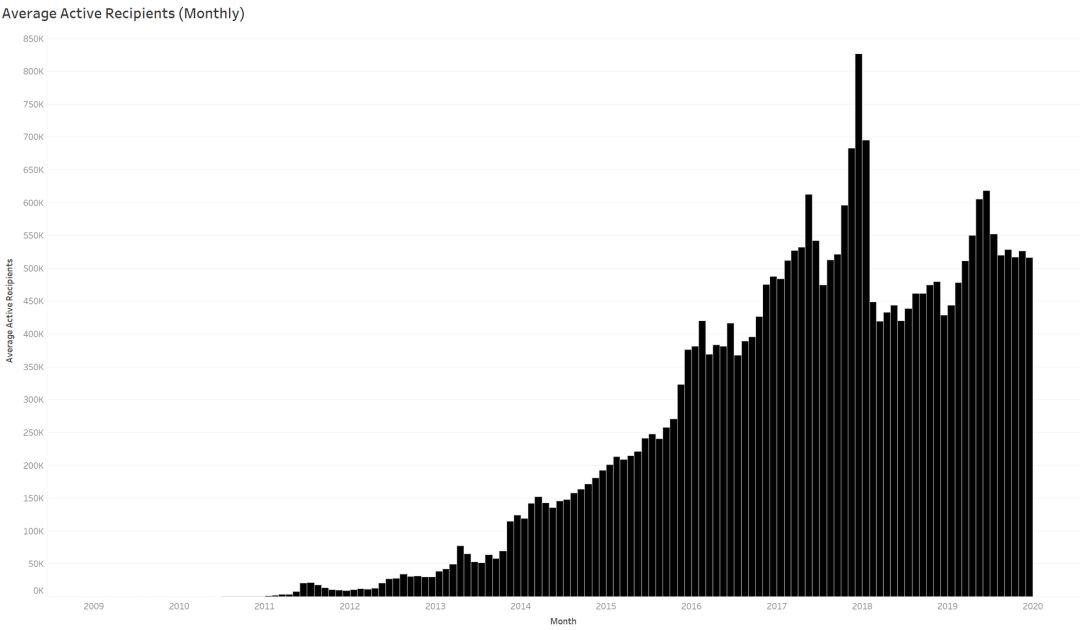 1. The number of active recipients has increased by 40676% over the past decade

Here, the number of recipients per month is taken as the representative of the number of network active persons. As of December 2019, an average of 516,000 unique addresses participated in the Bitcoin chain activities as beneficiaries every day. This number peaked at approximately 1.07 million on December 14, 2017.

However, this does not directly reflect the growth of the network. In order to observe further, we have to look at the number of new addresses in Bitcoin. 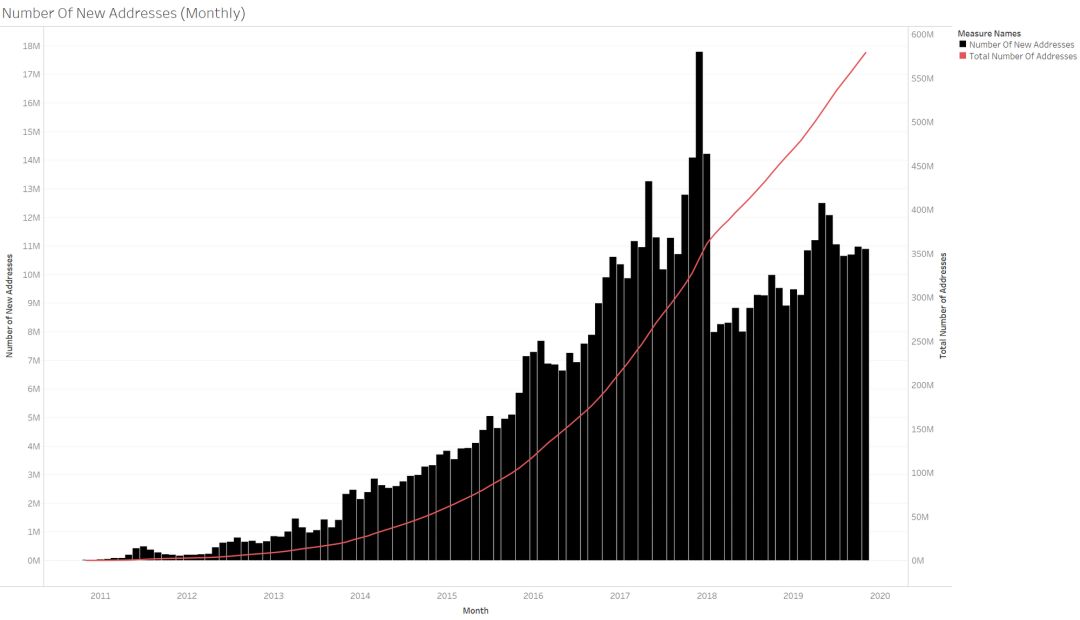 3.More and more people are inclined to hold 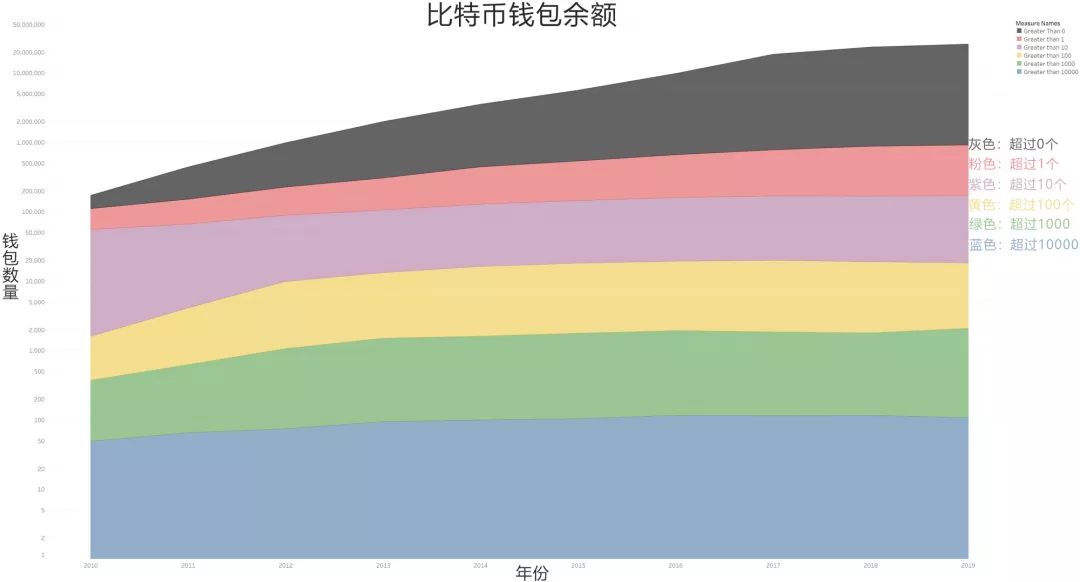 (Note: the vertical axis of the chart is logarithmic)

By studying the number of addresses holding 0, 1, 10 to 10,000 Bitcoins, we can clearly see that "Hold culture" is very obvious in the ecosystem.

By December 2019, users with more than 10 Bitcoins had surged from 51,000 to 152,000. This shows that despite the increase in the balance of early adopters and "whales", it is still the majority of retail investors that are driving demand for Bitcoin.

In addition, from studying these numbers, we can also draw a message: although the media often reports negative news, fewer and fewer people are selling their bitcoins, and more people are testing the water with a small amount of money.

In terms of scale, the number of people holding more than 0 Bitcoin in January 2011 was only 70,000. Today, that number has exceeded 28 million—a 400-fold increase over the past decade. 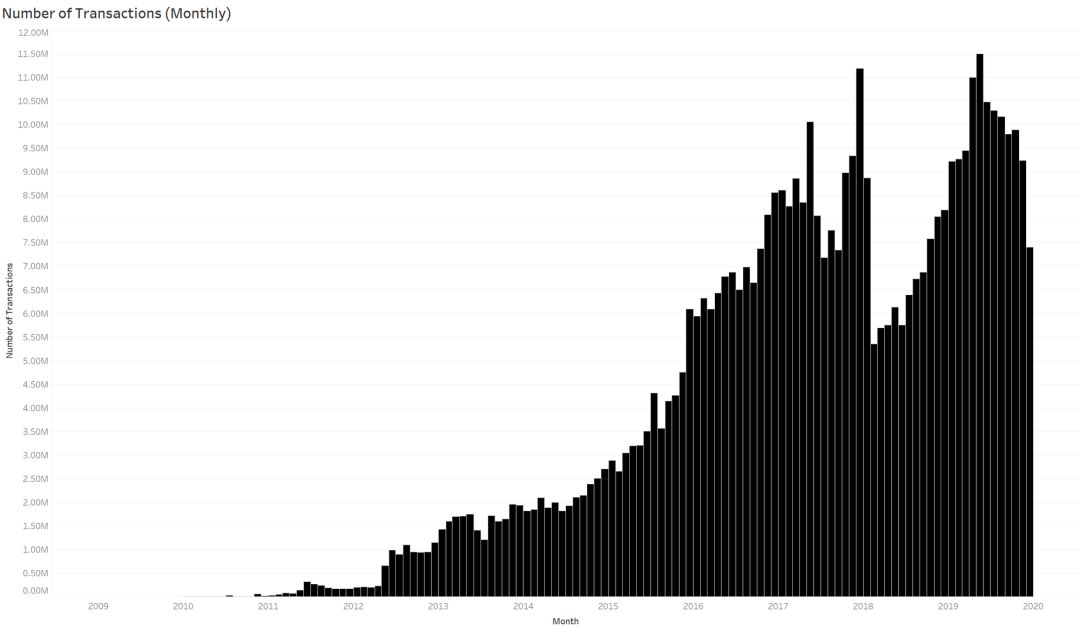 (Number of transactions on the chain)

1. 487 million transactions have been confirmed

Since its birth, Bitcoin has processed more than 487 million transactions. In 2011, that number was only 2 million.

Since 2010, Bitcoin's annual transactions have increased compared to the previous year. The only exception was in 2018, which was down 21.7%. 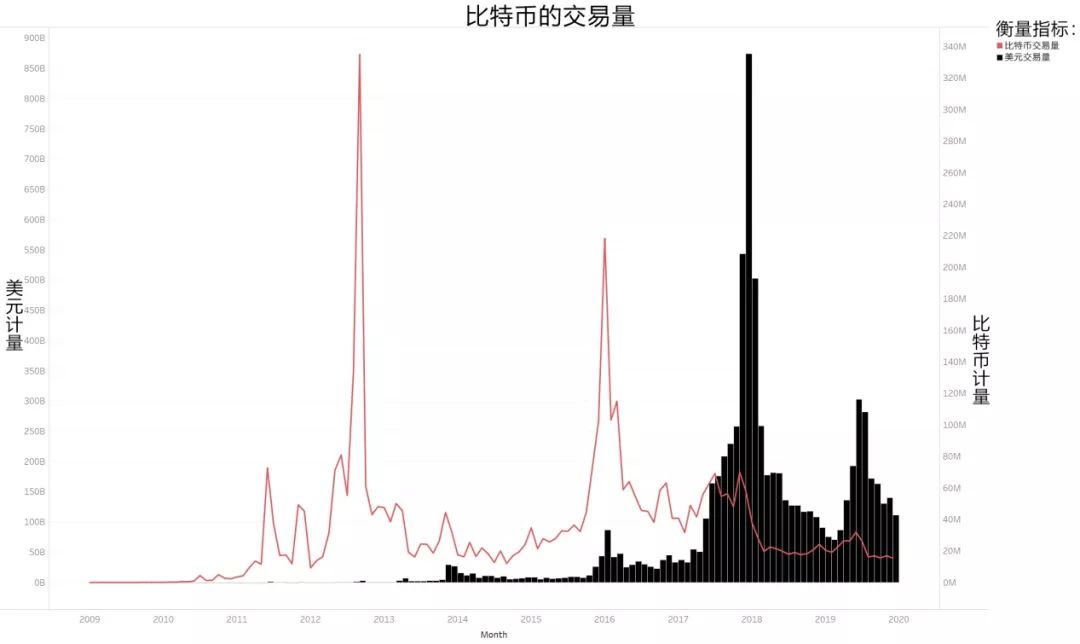 For a better understanding, the figure separates the number of Bitcoin transactions from the US dollar. Since the birth of the Bitcoin network, a total of $ 7.5 trillion in funds have been transferred, of which $ 870 billion was transferred in December 2017.

(Note: Each bitcoin move once is considered a transaction volume. Because there is a phenomenon of moving back and forth multiple times, this number will be much higher than the actual amount of bitcoin.) 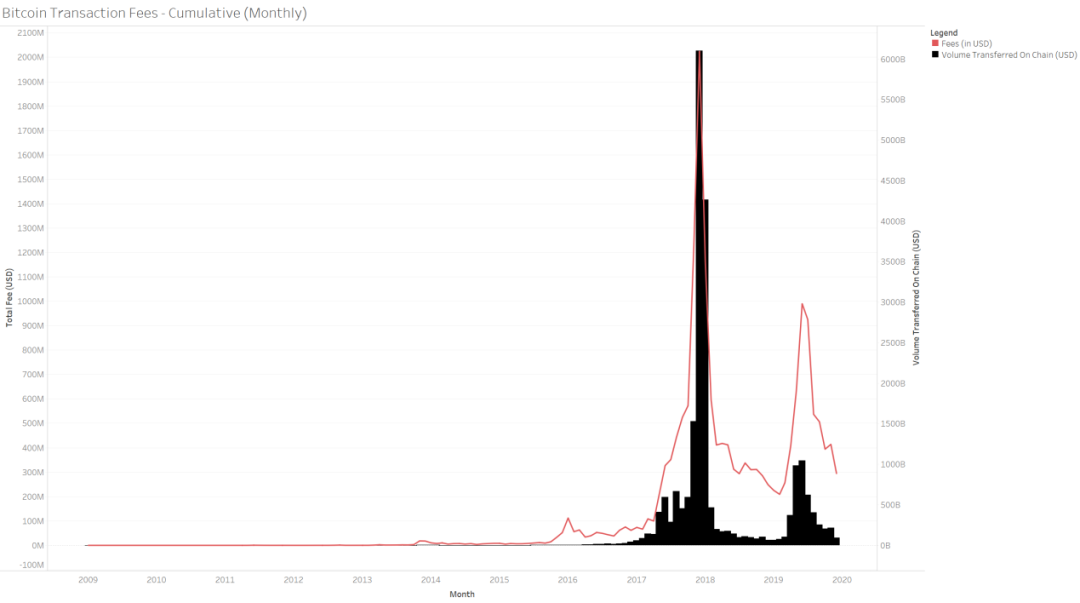 Since its birth, Bitcoin has spent $ 1 billion on transactions. But if calculated based on the number of bitcoins, it is 205,000 bitcoins.

If you look at these data from the perspective of transaction volume (in US dollars), it means that for every dollar of transaction fees spent, $ 75,000 flows on the Bitcoin network. In other words, in order to improve efficiency, we only need to pay a handling fee of 0.01%. But for small transactions, this may not be a suitable choice, because the cost of small transactions has been around $ 1, and in 2017 it rose to $ 53. 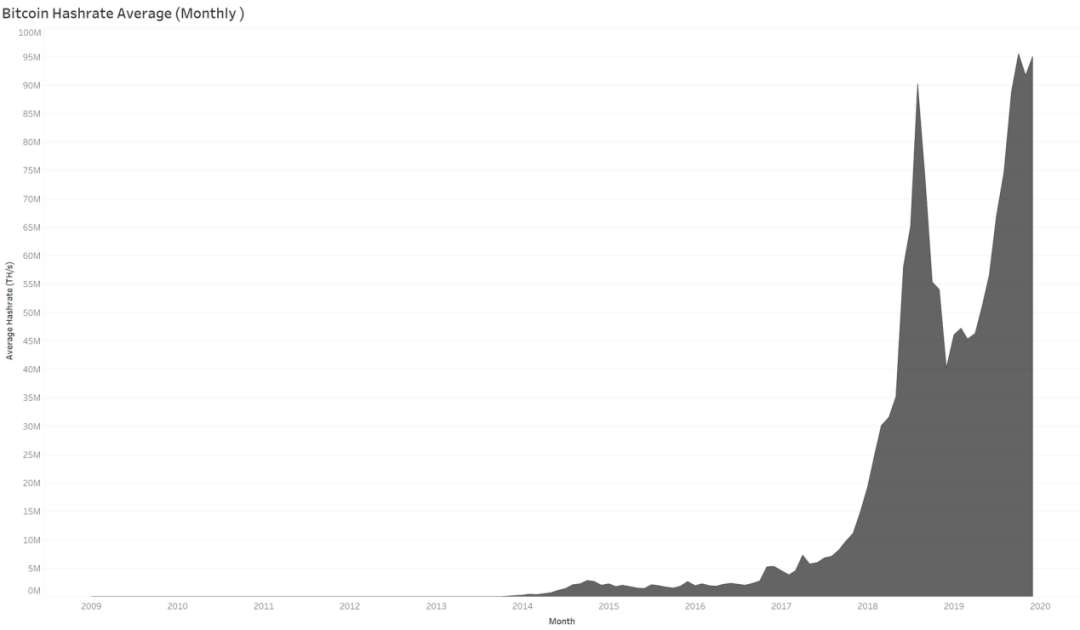 Over the past decade, mining has shifted from a hobby to large-scale, data center-based large mines. As of December 2019, Bitcoin's hashrate has grown to 95 million TH / s.

We can calculate the minimum cost of mining-this may help to explore how much money is invested in the mining industry.

Therefore, the Bitcoin infrastructure alone alone has an investment of at least $ 5 billion, accounting for 3% of Bitcoin's total market value.

In traditional centralized systems, the database can be opened or closed by the system administrator at will. Although this investment in Bitcoin looks "inefficient", it is the price that the ecosystem pays for decentralization.

2.This is partly due to mining pools that promote growth 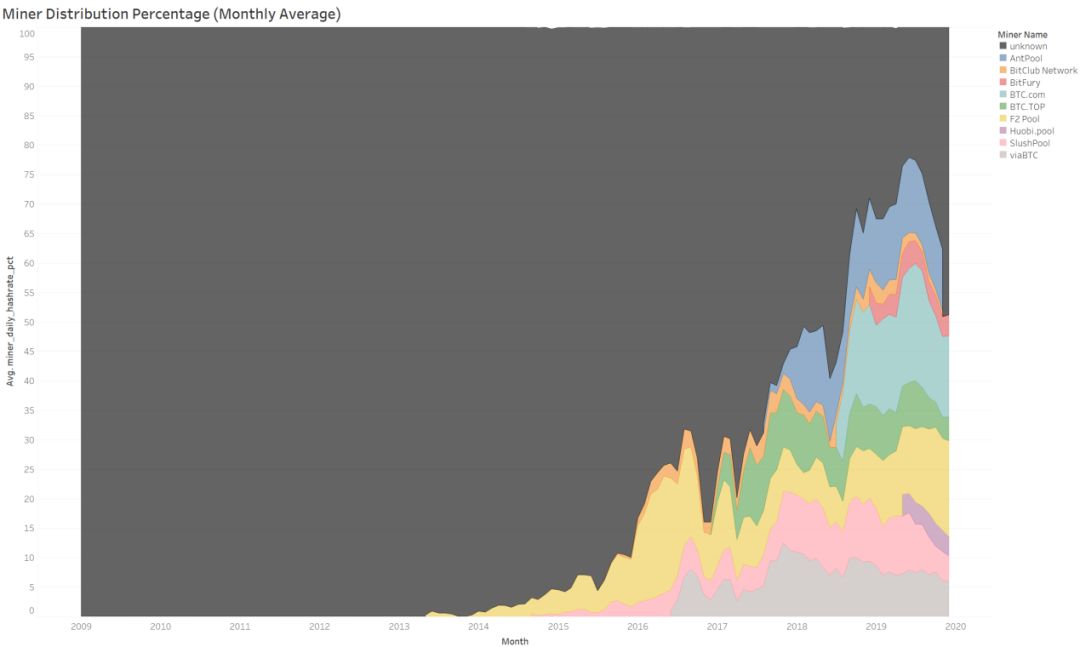 However, even a "decentralized" system is accompanied by the risk of monopoly. In 2014, a mining company had 42% of the hash power and was almost able to launch a 51% attack. At the time, God V also suggested that Bitcoin establish a bounty pool to encourage the development of peer mining pools.

Since January 2009, the mining pool has issued $ 16 billion in rewards to miners working on the network.

Interestingly, the Btc.com mining pool (2018) and Huobi mining pool (2019) soon integrated into the mining ecosystem. In addition, over time, the percentage of "unknown" mining pools in the network has slowly decreased. I think as mining difficulty increases and rewards are halved, mining will become an increasingly institutionalized game. We will see more and more infrastructure service providers dedicated to promoting the facilitation of mining, the development of ASICs, manufacturing and supply chains, and green energy.

In addition, if you want to know how these costs are allocated, take a look at the figure below. Here is a chart of the mining fee allocation for 2019 (excluding fees paid to unknown pools): 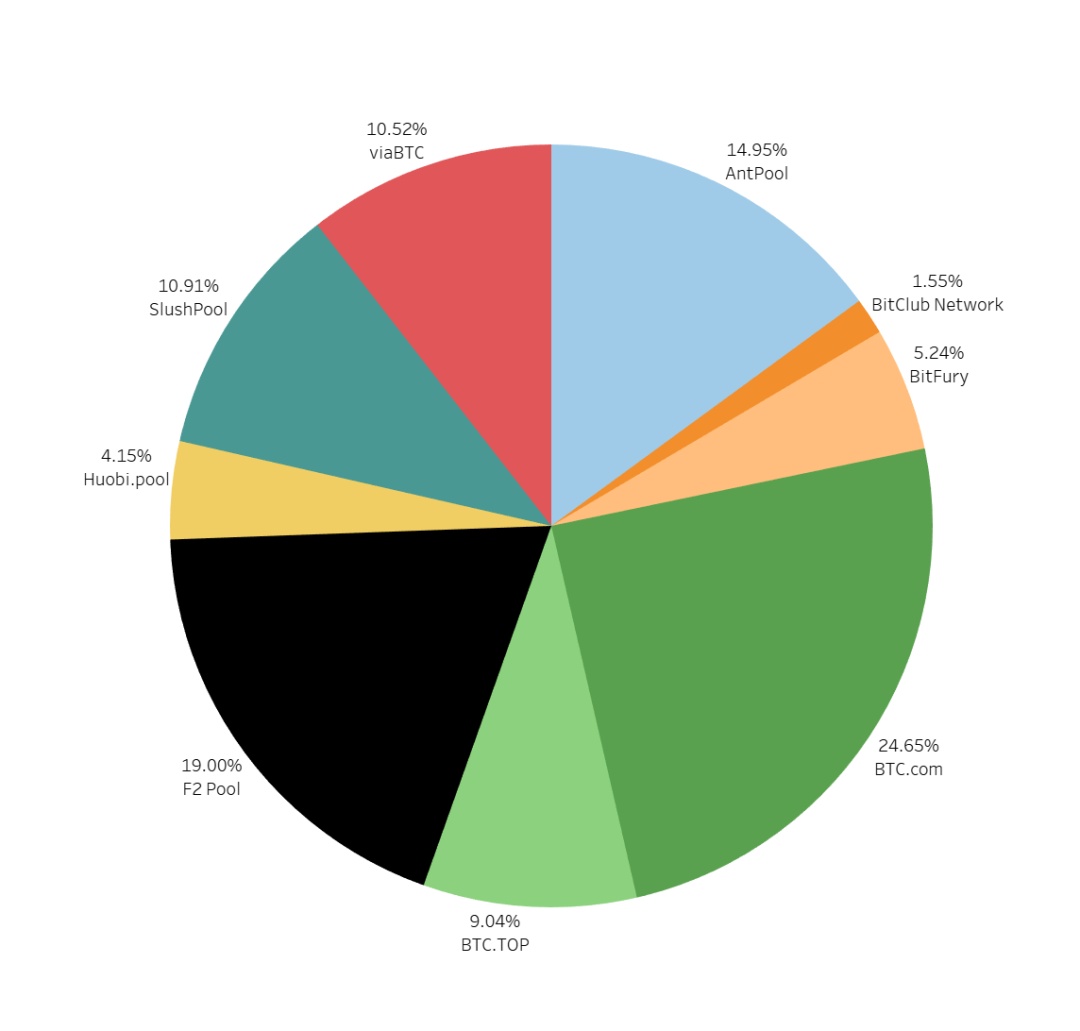 What does all this mean for us?

I have always thought that Bitcoin is the most important financial experiment in the world. It is based on more than 40 years of cryptography and decades of digital currency experiments. And when many people look at today's bitcoin ecosystem, what they see is the noisy crowd on social media, speculative fanaticism, and a chaotic culture.

Many people overlook the fact that these are well-designed because Bitcoin cannot compete with existing paradigms in fintech. Otherwise, Satoshi Nakamoto might sell to Silicon Valley venture capitalists instead of writing to a crypto punk mailing list. The value of bitcoin far exceeds the controversy we see on the Internet, far more than the hype of the media, it is a code change.

When Zimbabwe is experiencing an inflation crisis, Greece's debt crisis, or India's waste money, we see people awakening and realizing that there is another option. As Nick Carter once wrote- Bitcoin is the most peaceful change in human history. For me, this is the charm of Bitcoin.

The above indicators simply explain the growth of the Bitcoin ecosystem. Whether these trends will remain the same for the next 10 years, or whether the price will rise to $ 100,000, is not a problem- as long as the transaction can be confirmed, Bitcoin has solved its own problems.

Finally, note the transcript of Bitcoin over the past ten years:

"Black Paper for the Blockchain of Ping An District" was launched today, and the implementation of blockchain application in 14 scenarios

598 BTCs transferred from the Mars Exchange to the Okex Exchange, valued at approximately $5.079 million