"Bitcoin is the best performing asset in the past decade." Both Merrill Lynch and Bloomberg have reached this conclusion. If you look at the increase, it does. It took only six years for Bitcoin to go from $ 1 to nearly $ 20,000, but the other side that cannot be ignored is that it only takes one year for Bitcoin to return from $ 20,000 to $ 3,000. The bitcoin roller coaster-like market will also be staged in 2019. Between the ups and downs of the currency price, what kind of stories have ordinary users, "giant whale", exchanges and miners staged? PAData and Chain.info, a one-stop data service platform focusing on blockchain transactions, reviewed the data on the Bitcoin chain in 2019 and released the "2019 Data List on the Bitcoin Chain." In the previous article, we mentioned the heavy annual data. In 2019, there were over 100 million transactions on the Bitcoin chain, and the actual global market size was nearly 4 trillion US dollars, equivalent to about 1/4 of the total A-share transaction value. This article is the next, showing the changes of professional players such as exchanges and miners in 2019. 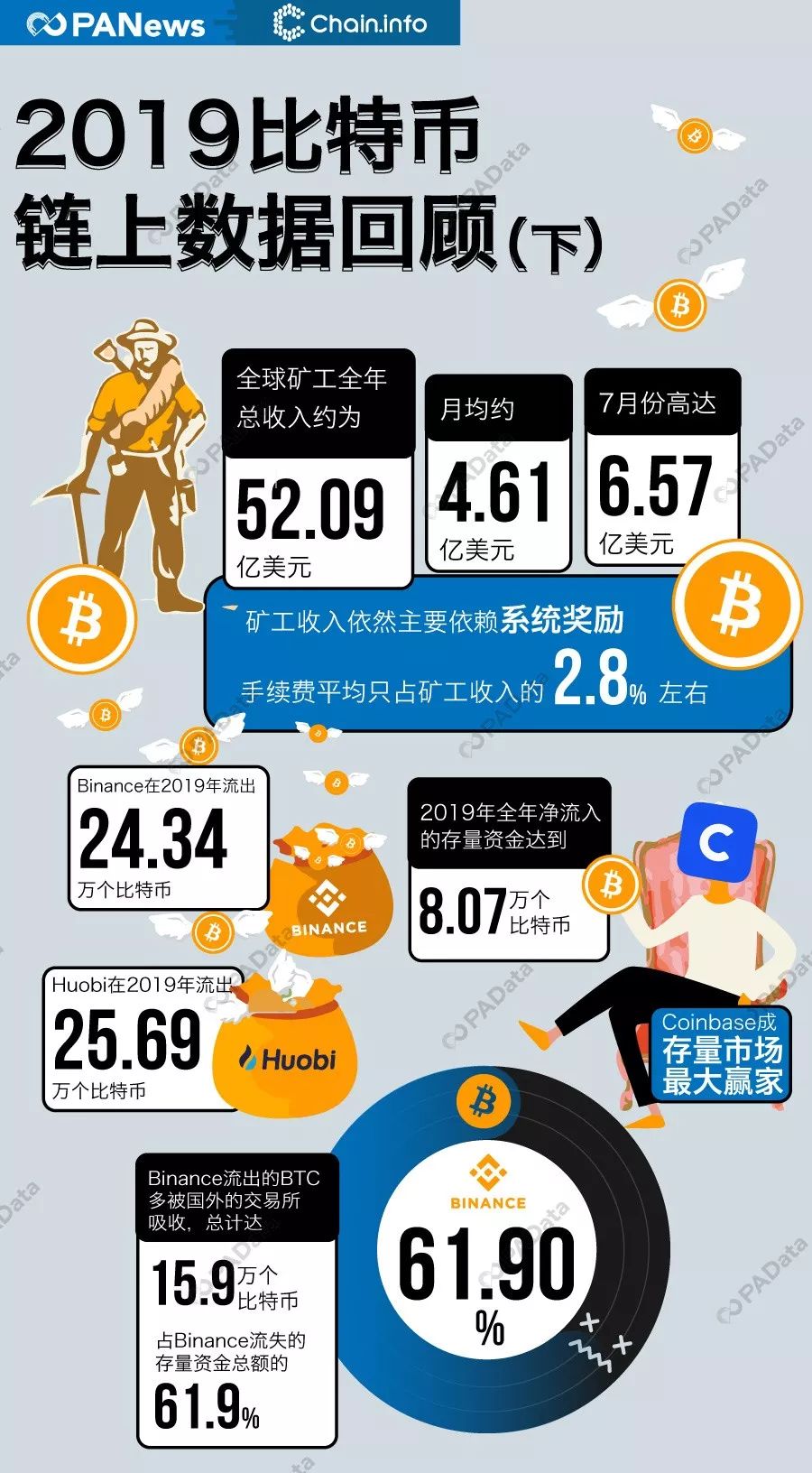 The average monthly income of global miners is $ 461 million, and the handling fee only accounts for about 2.8% At present, the income of miners still mainly depends on system rewards, and the handling fee only accounts for about 2.8% of the income of miners on average. But as the Bitcoin network rewards are halved every four years, the fee will gradually become the main source of income for miners. If the halving cannot bring the currency price up, then the miner's income pressure will increase, which does not rule out the possibility of rising transaction costs, which will affect the operation of the Bitcoin network. Coinbase's stock funds flowing in throughout the year are the most frequent among the three major domestic capital exchanges.

Although the global market size of bitcoin is close to 4 trillion U.S. dollars, this is still a niche market, especially in the past two years when bitcoin's "out-of-circle" effect has been poor and there has been no substantial breakthrough in user scale. Gambling has become the status quo in the Bitcoin trading market.

Chain.Info has established a global exchange wallet database containing more than 10 million address tags through machine learning algorithms. As of January 14, the largest BTC balance on the exchange's chain was Coinbase, with a total of about 98,131,000 bitcoins, followed by Huobi and Binance, which had on-chain balances of 336,700 bitcoins and 247,400 bitcoins. Bitfinex, Bitstamp, Kraken, Bittrex, Bitflyer, OKEx, and Coincheck are ranked 4-10, and the balance on the chain is more than 30,000 Bitcoins. 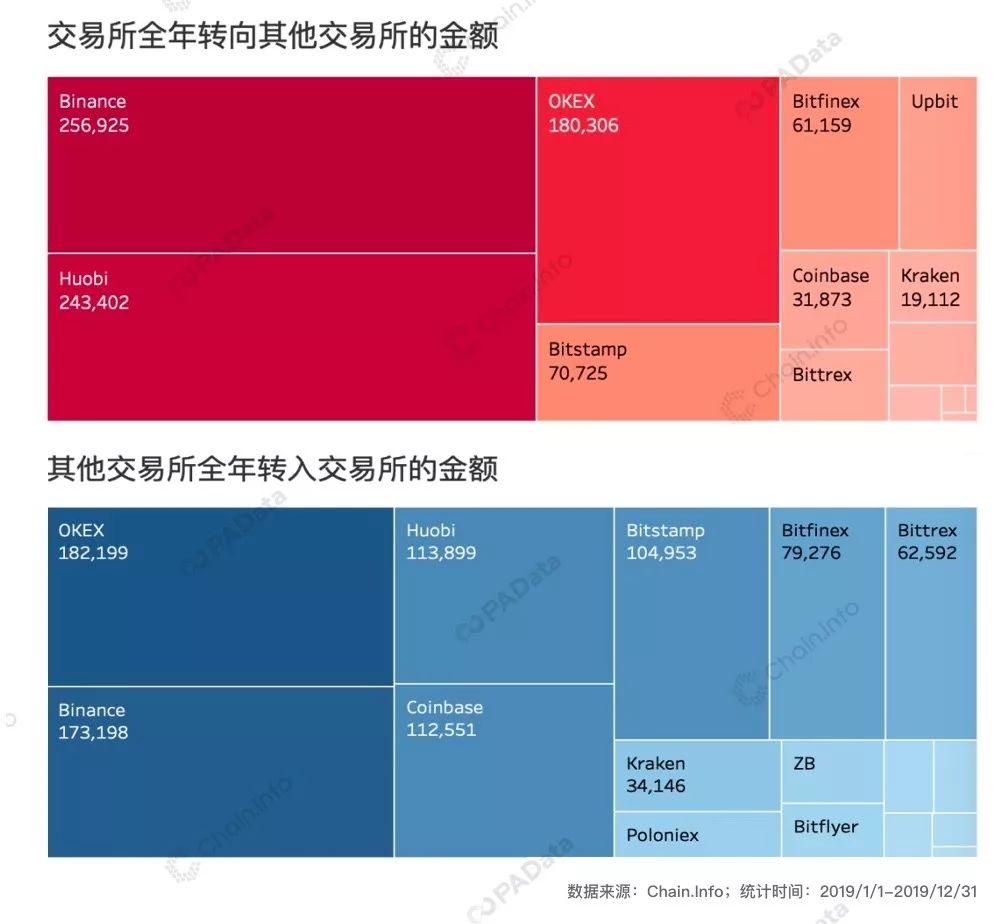 If the difference between the outflow of bitcoin to other exchanges and the receipt of bitcoin from other exchanges is regarded as the exchange obtaining funds in the stock market throughout the year, then according to calculations, Huobi outflowed 129,500 in the stock market throughout the year. Binance, which is also one of the three major domestic institutions, also outflowed 83,700 bitcoins , and Upbit also outflowed 30,800 bitcoins. PAData draws a network of transfers between exchanges throughout the year. The arrows indicate the transfer direction, and the thickness of the lines represents the amount of transfers. The position of the exchange in the capital network [1] is closer to the center, which means that it is more central in the entire network relationship. Conversely, closer to the periphery means that its position in the entire network relationship is more marginal. The less active the interaction is. In addition, there are also a lot of Bitcoins that Upbit has flowed to Bittrex, with a large amount of 445 transfers throughout the year and a cumulative transfer amount of 39,900 Bitcoins. The exchange that "harvested" the most stock funds in 2019 is Coinbase, of which Binance, Bitstamp, OKEX, and Huobi all "contributed" more than 10,000 Bitcoins, and Binance "contributed" the most, totaling more than 31,900 Bitcoins.

[1] The Fruchterman-Reingold algorithm is used here to lay out social network relationships.

Daily review: Bitcoin breaks the $ 10,000 mark, should not be blindly optimistic 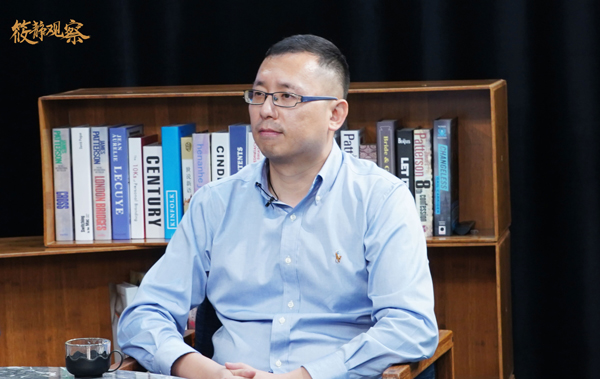