Ani is a large-scale enterprise group mainly engaged in the research and development of business information paper, production and sales of trademarks and trademarks, and comprehensive application services. Since its listing, it has been involved in lottery, Internet of things, blockchain and other businesses through frequent mergers and acquisitions. Recently, there has been a lot of speculation in the stocks of the market. Annie shares have taken this to achieve a triple board. 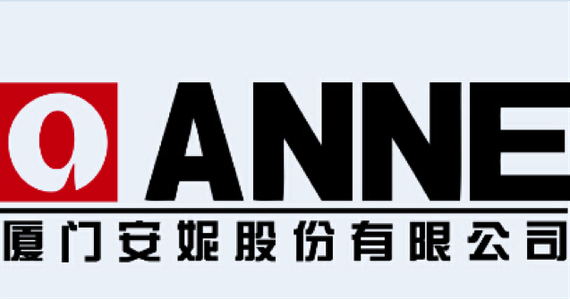 What is the quality of this concept stock included in the SZSE Blockchain 50 Index? Let ’s take a closer look.

"Copyright blockchain" is still in its preliminary stages

According to the 2018 annual report of Annie Co., the company continues to research and promote the transformation of scientific research results including blockchain technology, cloud computing, big data and artificial intelligence technology in copyright. The blockchain-based copyright registration service has provided rights confirmation services for millions of works, solving the pain points and difficulties of content creators. The copyright block chain first calculates the digital abstract of the content and extracts the digital fingerprint to the chain, ensuring the integrity and originality of the content.

Secondly, a certificate issued by a nationally recognized digital certificate authority is used to provide a digital signature, and the existence of the digital work, the ownership certificate, the authorization certificate and the infringement evidence are fixed in combination with the trusted time of the national time service center. Participants in the blockchain system use a full real-name digital identity authentication mechanism, combined with a trusted time service, to ensure the ownership and existence time of the work. The copyright blockchain fully records the user's entire creative process, thereby leveraging the massive, fast, and real-time characteristics of blockchain technology in the process of determining, authorizing, and maintaining rights, and gradually realizes "creation as confirmation, use as authorization, Discovery is rights protection. "
In addition, according to Annie's semi-annual report for 2019, on March 30, 2019, the National Internet Information Office released the first batch of 197 blockchain information service names and filing numbers. The company's wholly-owned subsidiary, Beijing Version Family Technology Development Co., Ltd. "Annie Copyright Blockchain" service platform was approved for record. In April 2019, the copyright owner, as a third-party blockchain certificate storage platform, provided electronic evidence for the first case of infringement of the work's information network dissemination case that was judged by the Beijing Internet Court by adopting the electronic balance of “balanced chain”.
However, although there has been progress in the copyright blockchain, the contribution of the blockchain business to Annie's revenue is still very small. 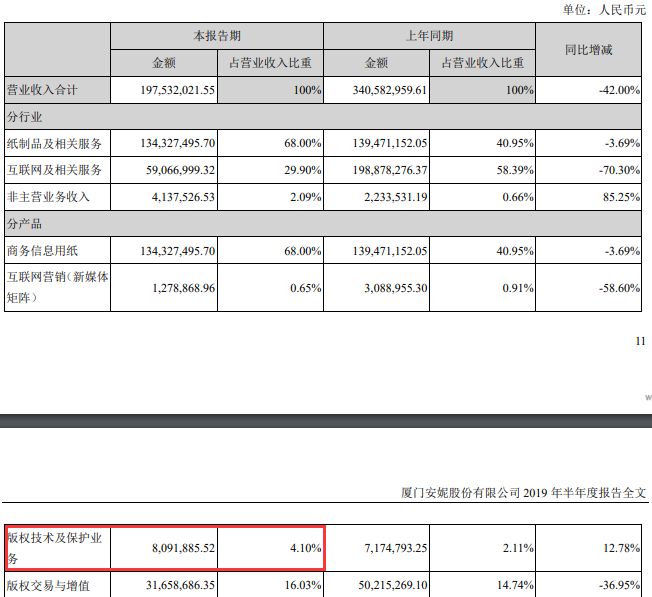 The revenue generated by the "Copyright Blockchain" is included in the "Copyright Technology and Protection Business" of Annie's 2019 semi-annual report. In the first half of 2019, the operating income of this part was only RMB 8.91919 million, accounting for 4.10% of the overall operating income of Annie's shares.
The entire "copyright technology and protection business" revenue accounted for only 4.10%, and the "copyright blockchain" accounted for a lower proportion.
In addition, Annie shares have expressed doubts about the prospect of the "copyright blockchain".
In April 2019, Annie Shares disclosed in response to the Shenzhen Stock Exchange announcement:

In March 2008, Annie's shares were officially listed on the Shenzhen Stock Exchange. After the listing, Annie's shares did not rely on the capital market to obtain business development. For 11 years, the performance has been struggling between slight profits and losses. (As shown below)

Just looking at net profit, the profit of 8.7 million in January-September 2019 is the best data in the past ten years, but mainly because the company completed the performance compensation from the beginning to the reporting period. The amount of stock cancellation price changes was included in the current profit and loss. Just the means. During the same period, the non-net profit (reflecting the profit of the main business) was -19 million, indicating that the company's main business was still losing money.
In addition to the performance of ten years without any advances, after the listing of Annie shares, there have been many dark history of performance changes. On October 22, 2008, Annie's shares released the first performance forecast after listing. It is expected that in 2008, net profit will be 58.72 million yuan to 67.76 million yuan, a year-on-year increase of 30% -50%. On December 31, 2008, Annie shares A revised notice was issued to lower the net profit growth rate to 20% -30%. However, in 2008, the actual net profit realized by Annie shares was 52.78 million yuan, a year-on-year growth rate of only 16.85%.
In April 2010, Annie's shares reduced their operating income in 2008 to 88.92 million yuan, down from 488 million yuan to 399 million yuan; the net profit was reduced to 18.16 million yuan, from 52.78 million yuan to 34.62 million yuan, after deducting non-net profit Adjusted from 46.45 million yuan to 28.29 million yuan. After adjustment, Anne's actual performance growth rate in 2008 was 16.85% to -23.35%.
According to statistics, from 2008 to 2016, Annie shares issued a total of 7 years of performance revision announcements. This capricious company deserves investors' vigilance.

After the listing, the main business was not frustrated, and Annie's shares simply started a merger. The lottery industry first entered the lottery industry through mergers and acquisitions in 2011, but since March 2015, lottery purchases have been suspended for a long time due to industry consolidation. 2016 annual report shows that the lottery business revenue is 0. Nonetheless, Annie shares successfully managed an Internet lottery and e-commerce concept. Subsequently, Annie's shares began to enter the Internet industry with a large amount of mergers and acquisitions. In March 2015, Annie's shares issued an acquisition announcement to acquire 51% of Weidream's equity for 96.39 million yuan; in June 2016, Anne's shares acquired 30% of Weidream's 30.41 million yuan Equity. In September 2016, Annie's shares purchased 100% of Changyuan Guoxun for 1.138 billion yuan.
These two mergers and acquisitions have included Internet marketing, intellectual property protection, and Internet + concepts.
In addition, the company also borrowed capital from Shanghai Yingying Digital Technology Co., Ltd. and the blockchain copyright protection application to embrace the concepts of virtual reality and blockchain, respectively. At this point, Anne shares have 12 concept blessings in the flush, although 68% of the company's business still sells commercial paper. With so many concepts blessing, the east side is not bright and the west side is bright. From time to time, the stock price has followed a wave of speculation. However, the long-term basis for the rise in stock prices is the growth in performance. Annie, which relies only on the concept and no performance support, quickly turned around after a short period of hype. The stock price has been tepid for many years.
Moreover, such frequent mergers and acquisitions have left most of the business in the end, indicating that the company is probably just hyping the concept and is not planning to operate well.

What is goodwill? In simple terms, it is the acquisition premium. For example, if you bought a company, it cost 1 billion, but in fact the fair value of the company is 600 million, so the extra 400 million spent is goodwill. When the acquisition target fails to fulfill its performance commitments, goodwill impairment is required, which affects the income statement.
Frequent mergers and acquisitions of Annie's shares are laying a great thunder for the impairment of goodwill.
On February 27, 2018, Annie shares released a performance report. In 2017, net profit was -358 million, a decrease of 31.75% year-on-year. The sharp decline in profit was mainly due to the impairment of goodwill of 360 million.

After a significant impairment, the 2019 third quarter report revealed that the goodwill of Annie shares is still as high as 743 million, accounting for 30.19% of total assets. The high amount of goodwill is still the sword of Damocles hanging on the head of Annie.
The more a company is a single company, the more focused it is and the better it is. The more frequently M & A companies like Anne shares become more prone to thunder.
In the short term, Annie shares may continue to pulse with this wave of technology stocks, but in the long run, the best way to avoid lightning strikes is to stay away. The average daily transaction amount of ETH Dapp users is more than five times that of EOS and TRON.