Almost a year and a half have passed since our first article (also the user activity on the analyzed DEX) was published in 2018. Over the past year, Alethio (the team behind our DEXWatch product) has witnessed many protocol upgrades and new user arrivals. Now we use data and visualization tools to review the growth of DEX in 2019.

In this review, we take the following performance of the 20 DEX as a sample:

The trading volume table in this article only reflects the data collected from these 20 DEXs. The performance of other protocols will be analyzed in subsequent articles. Similarly, the transaction volume of non-homogeneous tokens (NFT) is not included in our sample set.

Because DEX protocols often have unique attributes, some indicators may have different meanings in different cases. We will point out when we need clarification.

Statistics of daily transactions by DEX

EtherDelta and IDEX are the most popular decentralized transactions in 2017 and 2018. From the number of transactions, they are also the two largest DEXs in 2019 (see our statistics panel). Starting in mid-2018, more protocols and exchange relayers have appeared. At the end of 2018, Uniswap emerged because of its superior practicality. By the end of 2019, Uniswap has become the second largest DEX in terms of daily transactions.

In the figure below, we use time as the horizontal axis to show the daily trading volume of each exchange. IDEX is still the market leader, while Uniswap, Kyber and Bancor have surpassed EtherDelta. 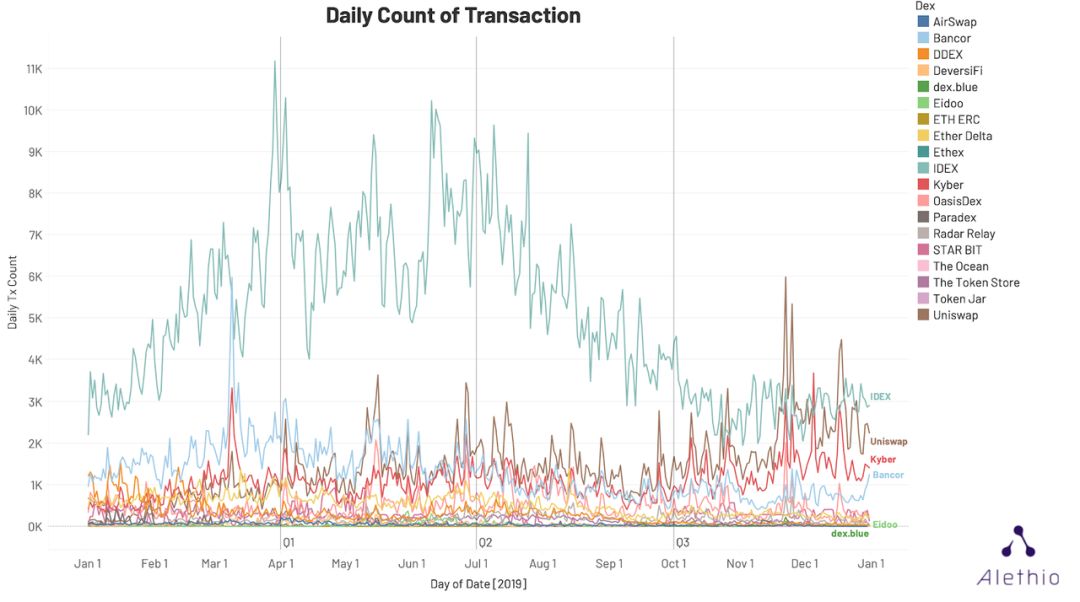 In the chart below, we will use the same legend as Figure 1 (indicating that the colors of different exchanges will remain the same).

Monthly trading volume statistics of each DEX (measured in ETH)

Most decentralized exchanges do not provide fiat currency entry, so traders on DEX either buy or sell tokens or buy ETH. On some exchanges, a token that encapsulates ETH is needed to trade a certain amount of ETH (such as WETH on 0x, ETHW on DeversiFi, and ETH Token on Bancor), and their value is exactly the same as ETH the same. (Translator's Note: This is generally a technical reason: ETH itself is not a token that conforms to the ERC-20 standard, and the use of the ERC-20 standard facilitates the exchange between tokens, so some contracts will provide for the exchange of ETH with a certain token And other interchangeable functions, and DEX often uses these tokens for technical convenience)

We can divide transactions on DEX into two categories: 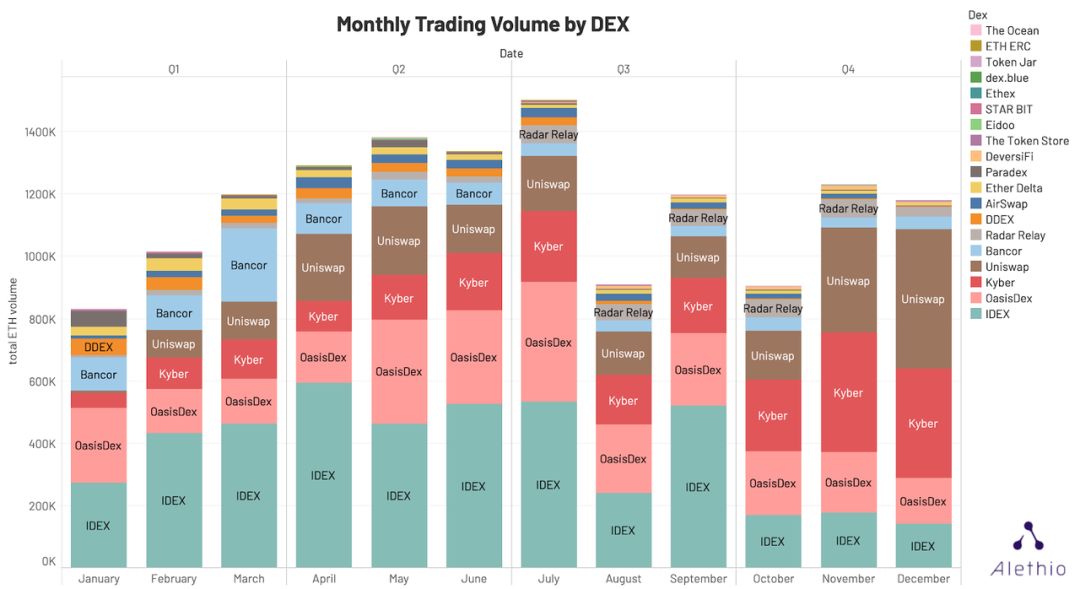 Monthly trading volume of each token to ETH

In the past year, we have observed transactions of about 4,300 different tokens on the 20 DEX listed above. The following figure shows the transaction volume of each token against ETH with time as the horizontal axis: 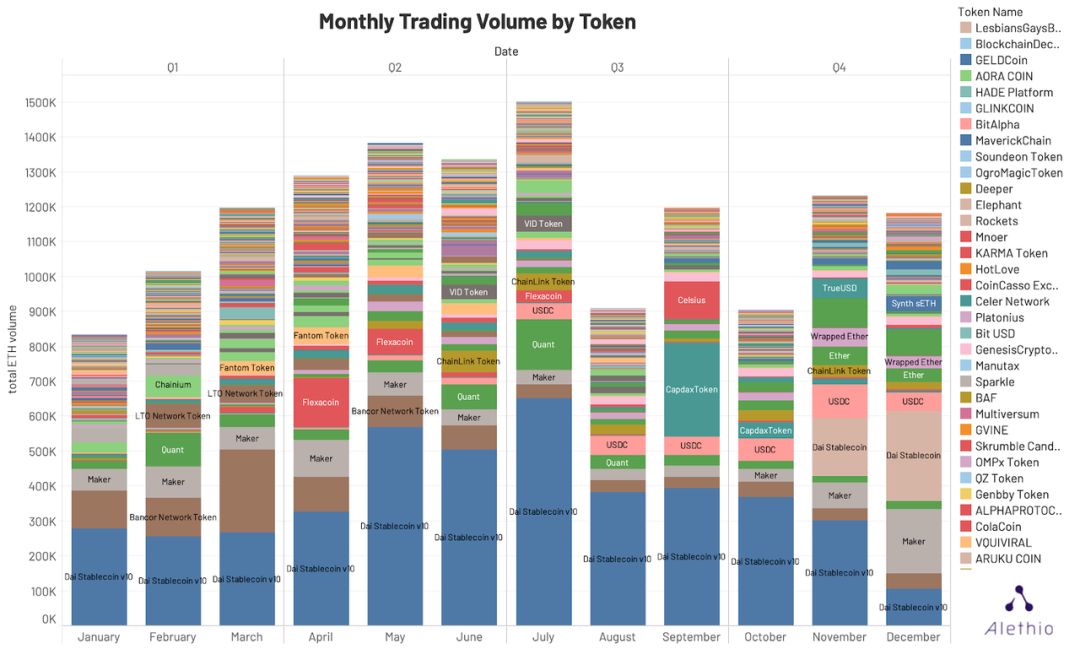 -Figure 3. Monthly transaction volume of ETH to ETH (total of all exchanges)-

With the rise of decentralized finance, Dai stablecoin v1.0 (also known as "Sai" now, before the MakerDAO multi-collateral stablecoin system was launched, users issued stablecoins by collateralizing ETH) became the transaction volume in 2019 The largest token. Other stablecoins including TrueUSD and USDC also maintained high trading volumes throughout the year. The new DAI (labeled "Dai Stablecoin" in the picture) (also known as MakerDAO's multi-collateral DAI) only started to appear in the fourth quarter of 2019, but quickly became the second largest token in transaction volume.

The transaction volume of ChainLink tokens increased rapidly in June and July. This was because the market was very interested in the ChainLink project at that time. What they were doing was oracle service, which is to send real-world data to dApps. -Figure 4. Top 10 Tokens for ETH trading (total of all exchanges)-

Further, in the figure below, we use the font size to indicate which exchange platform is providing liquidity for these large transaction tokens. The text is colored according to the DEX it represents, and the size of the font represents the exchange's contribution to that kind of token transaction volume. 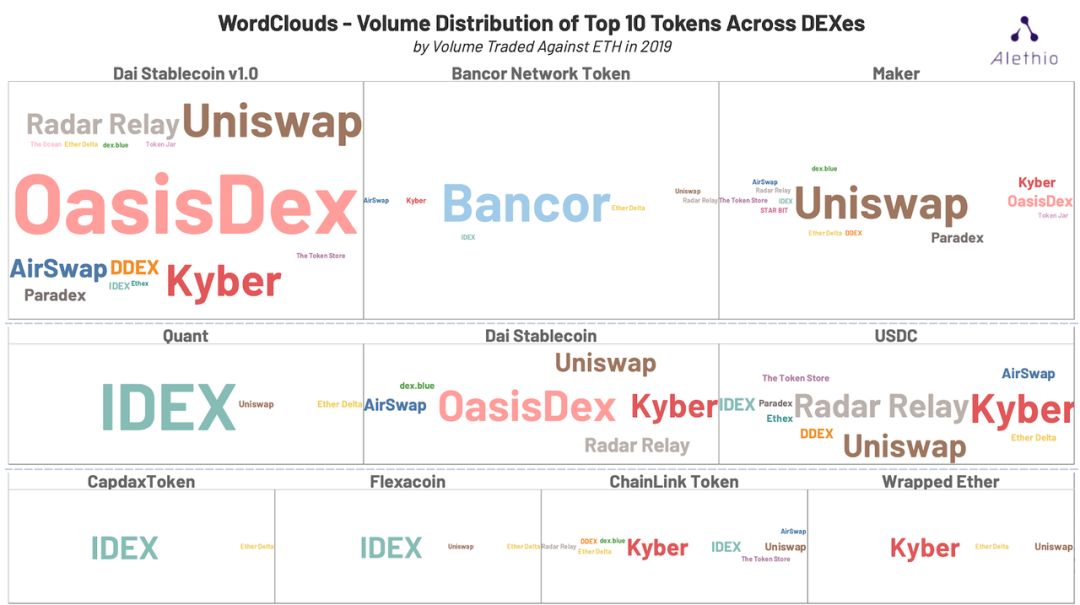 OasisDex is a trading platform developed by MakerDAO, which contributes most of the SAI transaction volume (about 2.42 million ETH). SAI's trading volume is also distributed on exchanges such as Uniswap, Kyber, RadarRelay, AirSwap, DDEX, and Paradex.

Interestingly, the transaction volume of MakerDAO's native token on Uniswap is larger than that of OasisDex.

BNT token (Bancor Network Token) is basically traded on Bancor. Although it can also be seen on other exchanges, the transaction volume is much smaller. Similarly, the trading volumes of Quant, CapdaxTokan and Flexacoin are basically exclusively owned by IDEX. The main exchange for Chainlink and WETH is Kyber. In contrast, the DAI stablecoin and USDC (the two major stablecoins) have relatively even trading volumes on all major platforms.

Collecting data by exchange, we can see how many tokens are in circulation in these exchanges in 2019. Although EtherDelta is neither in the number of transactions nor in the volume of transactions (according to Figures 1 and 2), it provides the most types of tokens to traders: there are 3190 tokens to trade on.

Note that the "token in circulation" is not the same as the "online token" on the DEX. Because there may be no market buy and sell orders for the tokens supported by the exchange, this number will be less than the number of types of tokens that DEX actually lines. -Figure 6. Diversity of tokens in circulation on various exchanges- 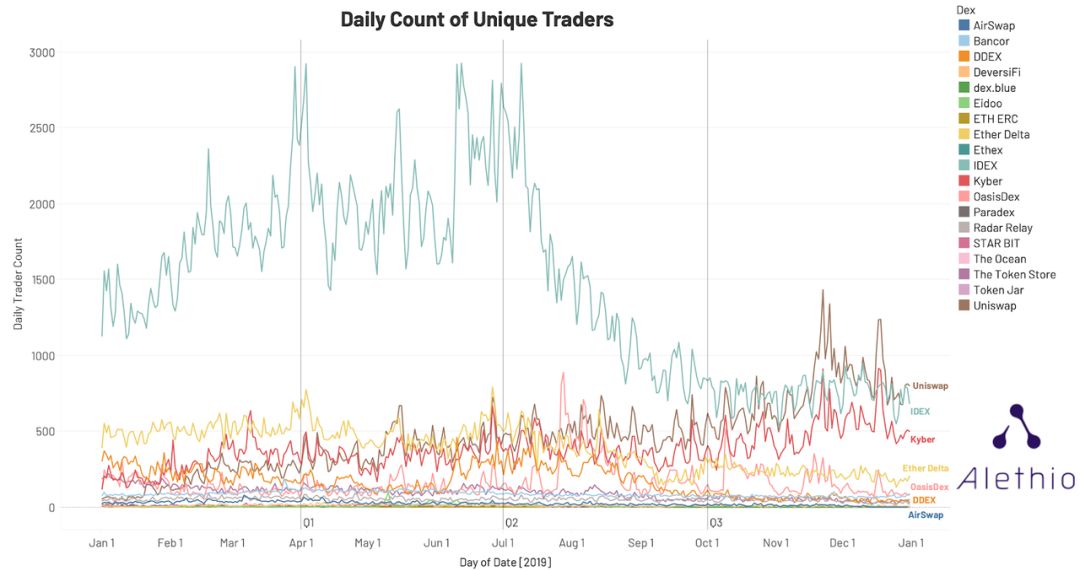 Another significant correlation appears on Kyber and Uniswap. The number of trading addresses of these two exchanges has been close for a long time, which may suggest that the users of these two platforms are the same group. The network diagram below also confirms this assumption.

By identifying the addresses of the DEX being used (they may be pending or order takers), we can explore the user base of the DEX, including the degree of user overlap between different DEXs.

dex.blue is special. Trade execution does not record trader information, so we cannot collect user data. When understanding this network diagram, it is important to point out that the number of addresses cannot be directly equal to the number of users. A person may use multiple addresses, so the actual user size can be considered smaller than the number of addresses shown in the figure. However, it still tells us the user relationship between these protocols.

Similarly, for some protocols, the scale shown in the figure below will also be smaller than the actual user scale. For example, Bancor is like this. In the Bancor protocol, the recorded transaction address is "forwarder" or "translator ( converter), transactions are handled by them.

In addition, Uniswap and Kyber have the most overlapping traders, which proves our assumptions based on the correlation of the number of active addresses of the two exchanges in time series.

IDEX has the largest group of exclusive traders, followed by OasisDex and EtherDelta.

From the picture, it seems that Bancor and Eidoo are isolated from other exchanges because of the converter / translator mechanism we mentioned above.

Disclaimer: Alethio treats all items mentioned above equally. The number of agreements discussed above is very small, and we will continue to enrich our observation list to obtain more comprehensive results. Alethio has a strong confidence in its neutrality. We only provide facts and draw the best conclusions based on objective and / or verified information. The text is absolutely not intended to provide any guidance or advice for malicious activities or transactions.

Secretary of the US Federal Bureau of Investigation: Encrypted currency will become an increasingly big problem

Guosheng Securities: There is no necessary connection between the blockchain concept and the central bank currency