Crypto crime reports: billions of dollars of money laundered, more than half flow into exchanges

This article is an extract from the "Chainalysis 2020 Crypto Crime Report" released by Chainalysis.com. The translation was provided by First.Vip. Please retain this information for reprinting.

Foreword: If a hacker has a large amount of illegally acquired cryptocurrency in his wallet, the next thing he needs to solve is to convert the cryptocurrency into cash without being arrested. Therefore, money laundering is inevitable.

Thanks to the transparency of the blockchain, we can clearly see the money laundering process of cryptocurrencies. 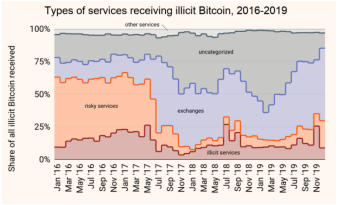 Note: This picture shows the proportion of illegally obtained BTC in various services from 2016 to 2019.

Exchanges have always been a laundering path preferred by criminals. As shown in the figure, a large part of the illegally acquired BTC has flowed into the exchange, and the proportion of exchanges has been steadily increasing since January 2019. Throughout the process, chainalysis tracked $ 2.8 billion in illegally acquired BTC from criminals into the exchange, with Binance and Huobi (Huobi) at the forefront, accounting for more than 50%.

Binance and Huobi are the two largest exchanges. To comply with KYC regulations, how do criminals transfer illegal income to the exchange? Chainalysis tracked accounts in Binance and Huobi that accepted illegally acquired BTC.

In 2019, Binance and Huobi received a total of 300,000 personal accounts from bitcoin sources. Chainalysis breaks these accounts into different categories based on the total value of all bitcoins received by the account in 2019. 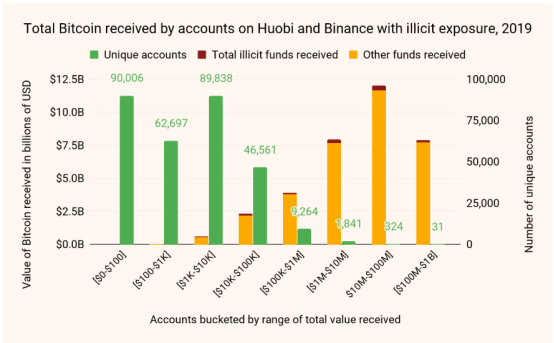 The classification criteria above is the number of Bitcoins received per account, including illegal and legitimate sources.

From the picture above, we can see that a small number of accounts are very active. Among them, in 2019, 2196 accounts received a total of nearly 27.8 billion USD in bitcoin. Illegal BTC accounts for only a small portion of the total amount received by Binance and Huobi.

Still, the total value of illicit funds is very high-in the highest category alone, 31 accounts received more than $ 163 million in bitcoin from illegal sources in 2019. 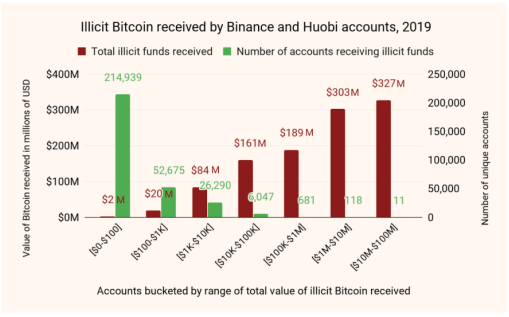 This picture is a summary of the illegal BTC value and the number of accounts received by Huobi and Binance in 2019, covering only accounts related to illegal funds

So who is the "whale" behind these activities?

Chainalysis analysis shows that most "whales" are OTC brokers.

The problem, though, is that while most OTC brokers operate legitimate businesses, there are some who specialize in providing money laundering services to criminals. OTC brokers' KYC requirements are much lower than exchanges. Many people take advantage of this looseness to help criminals launder money and exchange funds, usually by first converting Bitcoin and other cryptocurrencies into a stable intermediate currency, Tether, before cashing them into fiat money.

Based on the analysis of various criminal syndicate transactions, Chainalysis compiled a list of the top 100 OTC brokers, and based on the fact that they obtained a large amount of cryptocurrencies from illegal sources, it was determined that these brokers provided money laundering services. This is not an exhaustive list of corrupt OTC brokers. However, it is not only these 100 brokers who provide money laundering services. We call these 100 brokers "Rogue 100".

Please note that Rogue 100 is only an OTC broker who was manually identified as a money launderer during the investigation on behalf of Chainalysis. We believe that among other very active Binance and Huobi accounts, some illegal funds accounts may also belong to illegal OTC brokers, but they have not been found by us. Rogue 100 is a very active trader with a huge impact on the cryptocurrency ecosystem. Since the end of 2017, the number of cryptocurrencies they receive each month has been steadily increasing, but this year it has surged. In 2019, they received more than $ 3 billion in bitcoin, some of which played a significant role in the previous PlusToken scam. Overall, the funds received by Rogue 100 can account for 1% of all Bitcoin activity.

By analyzing the transactions of these OTC brokers in Chainalysis Reactor, we can see the flow of two illegal OTC brokers obtaining funds from illegal sources.

(From left to right) we see that the funds start from the criminal entity and are transferred to two OTC brokers via intermediary wallets (these two brokers are on the Rogue 100 list). The OTC broker then transfers the funds to Huobi and finally converts them into cash.

We can also see in Reactor that OTC brokers often trade with each other. Below is an example of viewing the transactions of three OTC brokers in Rogue 100.

This may only be a transaction process performed on behalf of a legitimate OTC manager. However, it can be learned from Chainalysis's field intelligence that money launderers and other criminals often conduct large transactions with each other in an attempt to reduce the risk of exposing criminal wallets through human activities and avoid blockchain analysis software.

Although it is difficult to estimate exactly how many tokens are flowing from criminal wallets to OTC brokers, analysis shows that a large percentage of all Bitcoin transactions are receiving illegal funds from OTC brokers.

How does the cryptocurrency industry handle OTC brokers and money laundering?

Money laundering facilitated by OTC brokers can drive almost all other types of crime covered in the Crypto Crime Report. After all, if bad actors can't cash out the cryptocurrency they receive through illegal means, the motivation for crime will be greatly reduced. This not only means that the number of victims will decrease, but as the industry works with regulators and traditional financial institutions and promotes increased adoption, it will help increase the reputation of cryptocurrencies.

Fortunately, law enforcement agencies, regulators and cryptocurrency companies can take some steps to put an end to money laundering. It all starts with transparency. Money laundering, especially in the rule of law world, is often considered a black box, and it can only be opened when a search warrant is obtained and the bank records of the suspect are carefully studied. However, using blockchain analysis tools, we can analyze transaction records on the blockchain and gain insight into how criminals can launder money faster. Law enforcement and regulators can better combat money laundering in cryptocurrencies.

We also call on exchanges to conduct due diligence on OTC brokers and other nested services running on their platforms. Most large exchanges (including Huobi and Binance) are already collecting KYC information about customers. Analysis shows that the exchange will continue to expand the scope of review to the OTC service platform and ensure that the OTC service platform has an effective KYC process for customers in order to play a role in combating money laundering. 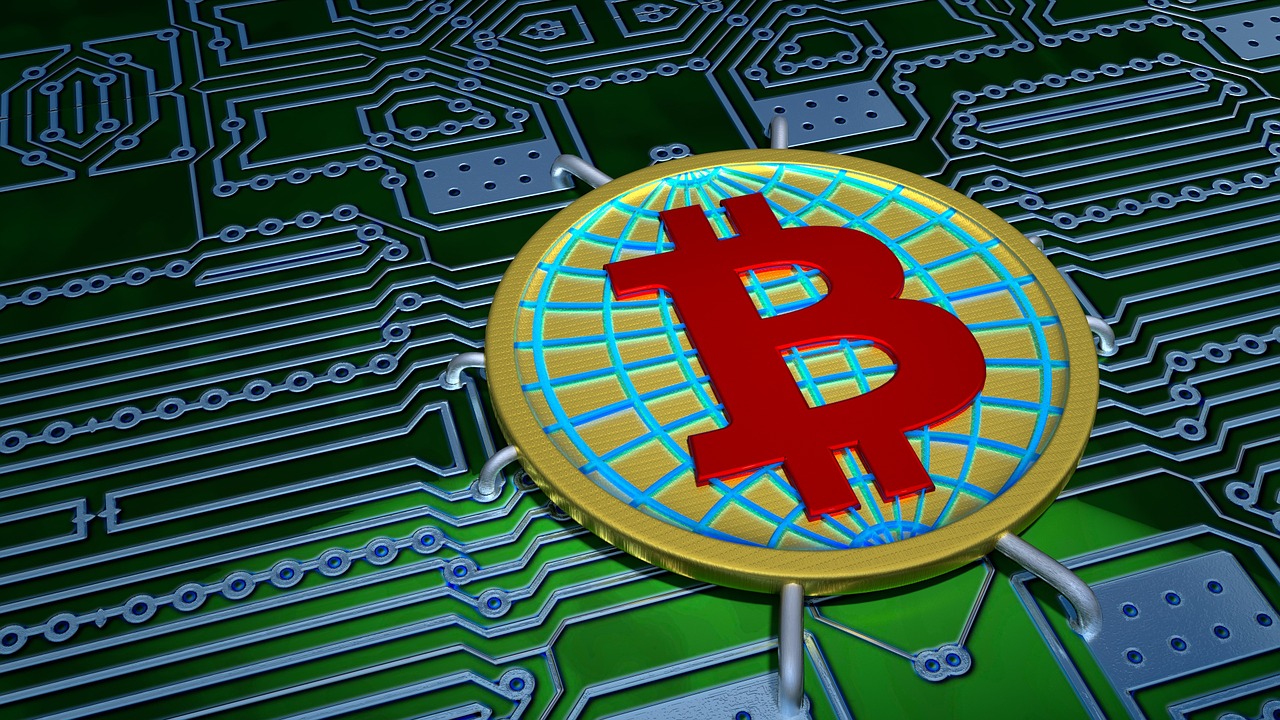 Read the simple logic behind the zero-knowledge proof

Getting started with blockchain | New advances in quantum computers, is the wallet safe?