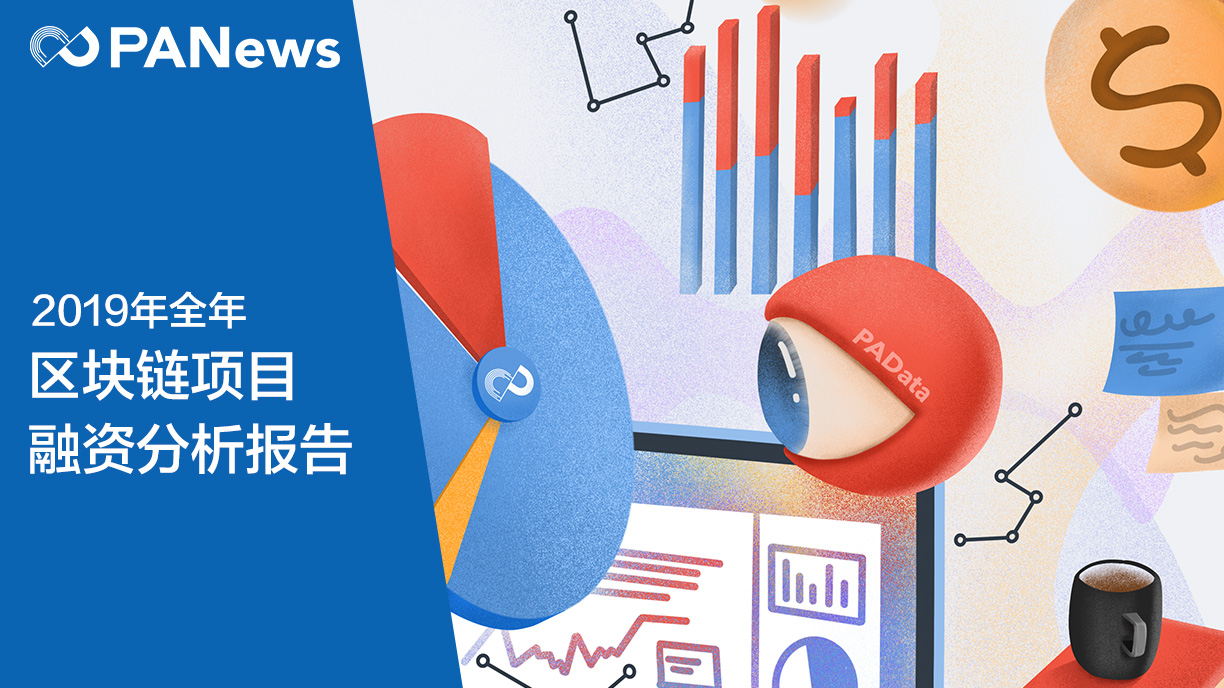 According to incomplete statistics from PANews, in the whole year of 2019, there were 653 blockchain-related financing events worldwide, with a total financing amount of nearly US $ 4.7 billion (about 32.9 billion yuan); in addition, there were 35 public M & A events in 2019, and the total number of M & A events The amount exceeds $ 3 billion. It should be noted that this report only counts publicly disclosed financing information, and does not account for financing forms such as IPO, IEO, ICO, STO. Data source of this article: PANews, SkyEye, IT Orange, Crunchbase, etc.

In 2019, the total number of financing events in the global blockchain industry totaled 653, and the financing frequency generally showed a rising trend. Among them, since 2019, from February to August, the market for the investment in blockchain projects has recovered enthusiastically, and the number of investment and financing has increased stepwise. The financing activities in July and August have risen significantly, with a total of 146 cases in two months. In September, the investment and financing market cooled, and the number of financing events plummeted by nearly 20, a quarter-on-quarter drop of nearly 25%. Entering October, the global blockchain market ushered in the peak of active capital in the year. There were 84 financing events in the month, which was close to 13% of the annual financing events. However, in the 4 quarters of 2019, the investment and financing situation in the fourth quarter The most unstable, the financing peak in October did not last for long, and the investment and financing market's active enthusiasm plummeted in two months. By December, there were only 39 investment and financing events, which was lower than the monthly average of 54.4 in 2019. In addition, the market enthusiasm has increased significantly in the second half of 2019, and financing events in the second half of the year increased by 135 from the first half, an increase of more than 50% from the previous quarter. It is worth mentioning that in mid-2019, the sentiment of the blockchain investment market is closely related to the Bitcoin market industry and the regulatory policies of governments in various countries. Among them, the period of more active financing events coincided with the bitcoin market rally in that year with a slight lag. Among them, a large amount of capital entered the market from July to August, and investor confidence in the industry increased greatly and continued to affect October of that year; In addition, in the second half of this year, the global regulation of the crypto field has entered a cold winter, especially the highly stable stable currency project Libra has been frustrated one after another. In addition, although countries are open to blockchain-related technologies, they are also engaged in cryptocurrency-related businesses. However, they generally held a skeptical and strong regulatory attitude. For a time, the industry's most represented by exchanges became the most sought-after "digital assets" related fields in a short period of time. The related areas were hit hard, causing Chinese investors' activities in the fourth quarter. More rational and cautious. Unlike the trend in the number of financing, the overall financing amount does not increase due to the increase in financing events. Except for the peak month, the total amount of financing in a single month is generally stable and slightly declining, which also means that the single investment amount of investment institutions is decline.

2. Strategic financing and round A financing are absolutely mainstream. The single financing amount is concentrated in millions of dollars.

Looking at the distribution of financing amount levels, apart from the financing events that have not yet been disclosed, there are 27 hundreds of thousands of dollars-level projects, 64 million-dollar projects, and 10 million-dollar financing projects. The overall financing scale of enterprises in the industry is relatively small.

Of the only 10 billion-dollar projects, except the information service provider Zhongan Technology, which obtained a strategic investment of 1.961 billion yuan by Beststar Holdings and Zhongan Online Investment in July 2019, the remaining 9 deals with Digital assets or financial scene applications. Among them, two types are digital currency exchanges and financial payment services. In February, the exchange Kraken received a USD 100 million investment. In October, the A.TOP Asian Exchange received a 50,000 Bitcoin injection of potato. This financing amount even ranked in TOP 1 in the disclosed projects, but the financing news also Suspected of. In terms of payments, Indian payment giant PhonePe obtained US $ 101 million and INR 4.05 billion in investments in July and October. In addition, two payment companies, Rapyd and Ripple, also received investments of US $ 100 million and US $ 200 million in the second half of the year. It is worth noting that in the middle of 2019, huge amounts of capital are favoring the financial payment field. Among the 9 billion-dollar financing events, payment applications accounted for 1/3. The overall overview of the financing stage in the industry's investment and financing market often reflects issues such as the development stage and scale of the industry. Blockchain, as an emerging technology, will have an "S" shape in its social adoption rate during its innovation diffusion process Curve distribution. From the increase in the number of financings throughout the year, the number of financing rounds is concentrated in the primary round with little change, and the type of financing is gradually moving towards multiple applications, it can be comprehensively judged that the current industry is in the rising period of early applications, and the industry development is not saturated.

In addition, the dynamic trend of "financing starts to shift from the early stage (before the A round) to the middle and late stages" can reflect that the industry is gradually expanding in size and becoming mature. In the first quarter of 2019, financing rounds were concentrated in the initial stage, and round B and above financings had a large area of ​​faults, but this situation continued to change over time. In the first quarter, financing rounds were concentrated on round A and below financing. In the incident, but in the fourth quarter, the financing rounds developed discretely in the middle and late stages. At the same time, the number ratio between rounds fell sharply. At the same time, the distribution of rounds tended to be balanced and faults gradually reduced. The exchange is a well-deserved Changsheng track in 2019. The number of track financing events accounts for 60% of the total, and it divides about 40% of the total financing amount.

In addition to the exchange, solutions / technical support in the underlying technology, public chain; information in industry services; games in physical application scenarios; payments in financial applications, etc. can account for the total frequency of financing To more than 5%. From the figure, it can be seen that the division between the internal segments of the digital asset class and the underlying platform is more obvious. On the one hand, the development of these two categories has a relatively long time, and competition and elimination in mature industries have already begun. Expand in one step.

In 2019, in the trend of financing type preference, the investment fever has transitioned from digital assets to industry applications. On the one hand, this is related to the industry's own development stage; on the other hand, regulators of various countries have tightened their digital asset supervision in 2019. Among them, China is the representative. After October 2019, a number of heavy punches were directed at digital currency transactions. , Or will cause the hot track digital exchange to move into the financing winter.

4. China and the United States are active in financing, with financing events accounting for 60% of the world's total

It is not difficult to see from the regional distribution that the seven continents, Central and North America, Asia, and Europe have become relatively active regions for investment activities. The Americas is dominated by the United States. In 2019, a total of 181 financing events occurred, accounting for 27.7% of the world's total. The investment field covers the entire industry. In Asia and Europe, a total of 11 countries have invested in blockchain-related projects, and their international distribution is more divergent. Among them, the 22 financing incidents in the UK were among the TOP1 in Europe.

In Asia, China, Japan, South Korea, India, Singapore and other places have established their own blockchain ecosystems with their good economic infrastructure. China (including Hong Kong, Macao, and Taiwan) has conducted a total of 191 blockchain-related issues in 2019. There were 3 investment incidents in Japan, 9 in South Korea, 19 in India, and 47 in Singapore.

It is worth mentioning that markets such as India, Vietnam, Brazil, or their demographic dividends and loose policy outlets are accelerating the trial application of blockchain-related industries with a view to achieving a detour in the new round of technological revolution overtake. 5. Financing events are mostly distributed in industrial agglomeration areas. The number of financing projects in Beijing leads the country.

Domestically, because digital trading activities such as "ICO" have been banned in the country, the preference of financing types is slightly different from the overall global trend. Domestic industry investment tends to focus on the underlying technology and industry applications. Especially since October 2019, the blockchain has risen to the national strategy, and industry applications led by the government have begun to bloom everywhere.

According to the analysis of the “ 2019 China Blockchain Industry Development Report '' previously co-authored by PANews, China's blockchain industry is mainly concentrated in the four major blockchain industrial zones around the Bohai Rim, the Yangtze River Delta, the Guangdong-Hong Kong-Macao Greater Bay Area, and the Hunan, Guizhou and Chongqing. Enclave. These regions often have good industrial foundations, abundant talent advantages, and multi-directional policy dividends. In 2019, there were 191 domestic blockchain-related financing events in China, with a total of 1.152 billion US dollars in financing. From the perspective of investment and financing enthusiasm in various regions, the Bohai Rim region with Beijing as the core will be more favored by investors in mid-2019, accumulating a total of 96 financing projects throughout the year, Beijing has 93, and the year has attracted more than The investment of 370 million US dollars leads the country. 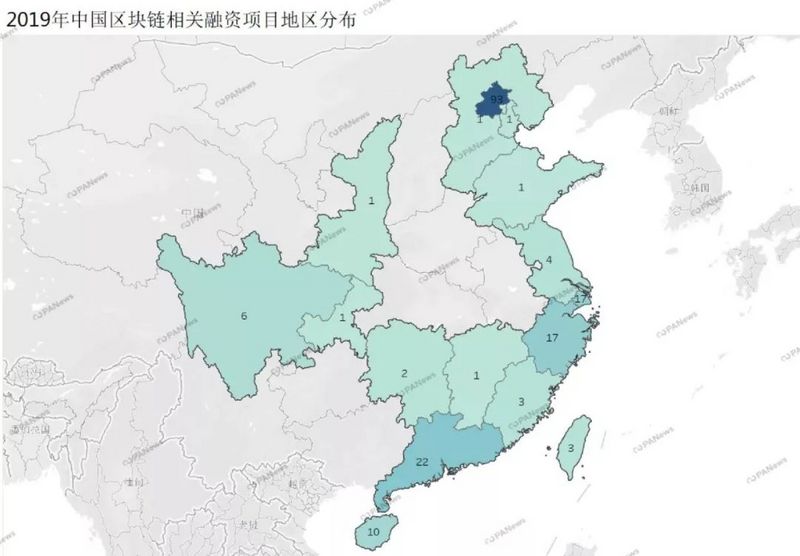 In terms of cities, Beijing has performed most prominently. On the one hand, there are various types of financing in this area, ranging from the underlying technology to industry development and application landing; on the other hand, the total financing amount in Beijing is not only the highest, but also there are more large-scale financing events.

The performance of the Guangdong-Hong Kong-Macao Greater Bay Area is second only to Beijing. The performance of the Hong Kong-Shenzhen Double Heroes is outstanding. The Greater Bay Area has invested a total of 30 times and accumulated inflows of more than US $ 100 million. In fact, in 2019, the Guangdong-Hong Kong-Macao Greater Bay Area has repeatedly taken action in many aspects such as supervision and policies. Among them, the Hong Kong Securities Regulatory Commission issued a series of regulatory measures during the year, paving the way for the blockchain industry, including the announcement of the regulatory details of the virtual asset trading platform; Shenzhen was centrally positioned as a "test field" for digital currencies.

Compared with the Bohai Rim, Guangdong, Hong Kong and Macao Greater Bay Area, the Yangtze River Delta region has the weakest absorption effect. Shanghai, Zhejiang, Jiangsu, and Anhui have accumulated 31 financings, including 16 in Shanghai, 13 in Zhejiang, and 2 in Jiangsu. Up, while Anhui is 0.

It is worth mentioning that Hainan also had 10 financing incidents this year.

Panda Miner Mei Chaoqun: The cost of a single BTC mining has risen to RMB 2-3 million, which is not suitable for small and medium miners.