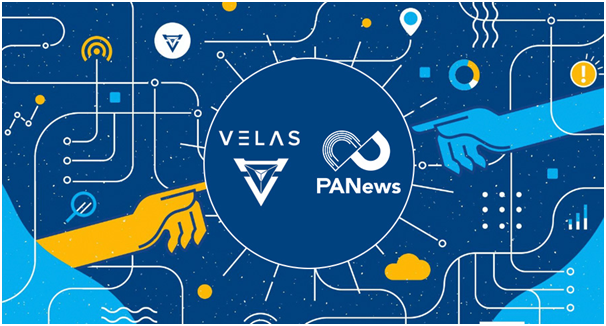 TPS (Transfer Speed ​​Per Second) is the most intuitive experience that the public chain system can bring to users, and it is also the most prominent feature that attracts the attention of users. High TPS means that users are fluent when issuing and receiving coins. Low TPS requires users to spend more time waiting for data confirmation on the chain.

Among the surveyed population, 71.75% of users believe that TPS plays a decisive role in the development of the public chain. After further interviews and understandings by Velas and PANews, it was found that both developers and users hope that the blockchain application can bring about "non-inductive" excess, that is, no matter whether asset transfer, data packaging or transmission, and operating efficiency are as much as possible It is the same as centralized application, and high TPS is a prerequisite for no over-sensitivity. 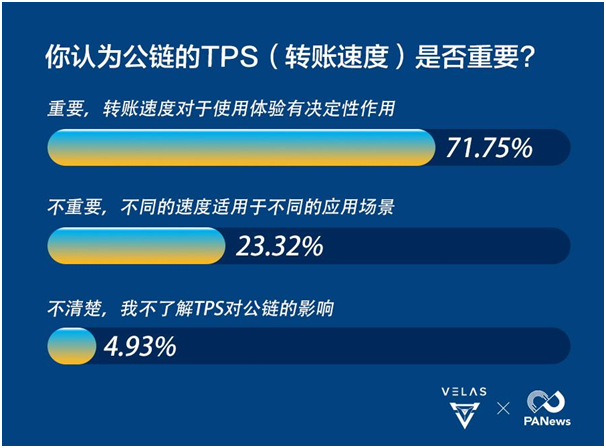 At the same time, TPS also determines the public chain's capacity for peak users. If TPS is too low, many users will perform certain operations on the chain at the same time, which will cause problems such as stuttering, unable to trade, and long transaction time.

The reason why the public chain represented by EOS can complete the TPS performance transition is mainly because of its DPoS consensus mechanism and the combination of super nodes and standby nodes. DPoS is a proxy-agent voting system. Nodes collect votes from holders through competition. Finally, 21 nodes with the highest votes are elected as super nodes to jointly govern the main chain.

Alex Alexandrov, the founder of the world ’s largest coin payment processing wallet Coinpayments, and also the founder and CEO of the artificial intelligence public chain project Velas, said: "Actually, 'TPS and decentralization increase at the same time' is not indispensable, we have been researching And the direction that has achieved some results is to add AI algorithms to the public chain system to avoid the potential dangers of "rule of man." Velas' AIDPoS consensus system was born for this purpose, and established a fault tolerance system. Consensus' eliminates irregularities in the blockchain and ensures that the network operates as expected. "

Furthermore, the calculation of the block production time and the reward of node operation by AI, the best results produced can greatly reduce the cost of consensus, complete the second transition of the blockchain public chain system, and expand the real available TPS to several 10,000 times per second.

AIDPoS is not only a solution proposed by the industry. Among the users surveyed, among the choice of many consensus mechanisms, about 35.87% of users think that DPoS-like solutions are more conducive to the implementation of blockchain applications; and they prefer the Bitcoin PoW mechanism and The users of Cardano PoS mechanism and Ethereum hybrid consensus mechanism are 21.97%, 19.28% and 22.85% respectively.

Staking has a higher acceptance in the public chain governance model

Another layer of staking can relatively reduce the liquidity of public chain tokens in the market, maintain stability at the fund level, and reduce the risk of developers and users holding coins.

However, the current public chain Staking system has been criticized for "who has more coins and who produces blocks". The conspiracy formed by capital and giant whales can easily cause a fatal blow to public chain governance. EOS super nodes have been repeatedly exposed to problems such as co-building of voting warehouses between nodes, mutual interest voting, and bribery elections. Even a node supports multiple peer nodes to maximize their benefits by operating a voting system.

"Multi-dimensional scoring and weighting of nodes, and finally selecting block nodes based on objective data are important directions that the current public chain should explore." Alex Alexandrov told PANews. He calls this the "proof of importance algorithm", and this is one of the core algorithms that the Velas network is running. Under this algorithm, if nodes continue to honestly process real transactions, continue to operate online, and continue to mortgage tokens, they can be used as an important reference for priority block production.

The current development of the public chain has entered a technical bottleneck. I hope that Ethereum 2.0, which uses fragmentation as a breakthrough, has been delayed, and in order to break through the dilemma of public chain development in a short time, many developers have begun to move to the Layer 2 level. Network, Thunderbolt Network and other off-chain capacity expansion solutions to achieve "curve to save the country".

The AI ​​blockchain public chain can calculate the number of block nodes and rewards through training of artificial intelligence algorithms. While ensuring that the number of users on the chain increases, the degree of node dispersion also increases.

At the same time, the AI ​​algorithm also plays an important role in the use of Staking smart contracts. For example, the AI ​​smart algorithm introduced by Velas can dynamically and statically verify contracts in various directions through neural networks. At the same time, when each contract is created, an adversarial network is generated. , The random hacking code in the combined database attacks the contract, and then the artificial intelligence enhanced learning technology automatically corrects the contract code, so that the contract reaches a very high security standard.

In the application of the public chain, 52.02% of users believe that financial payment is the direction where the blockchain is easier to land, and in the ecological use case of Velas, financial payment is an important development link. Velas allows the creation of public and private containers for all supported tokens. Velas also supports generating private keys for other cryptocurrencies.

Blockchain technology is of great significance for the development of the entire technology world, but it is undeniable that the entire industry is still in its infancy. The integrated development of multiple technologies is an important exploration path for blockchain, and artificial intelligence AI is the blockchain. The best catalyst for technological development. In the process of combining AI and blockchain, regardless of network security, TPS performance, and node dispersion, it can break through existing bottlenecks and enter a new era of public chain development.