Cryptocurrency money laundering analysis: how criminals will transfer billions of dollars in 2019

This article comes from chainalysis

If you are a hacker or criminal, when your wallet is full of illegally obtained cryptocurrencies, you have to face a problem:

"How do I convert it to cash without being arrested? "

The answer must be: money laundering.

Thanks to the inherent transparency of the blockchain, we can look at the cryptocurrency money laundering ecosystem from a higher perspective and gain some value that cannot be obtained in the traditional fiat currency world. Let's first look at the most common destinations where criminals send Bitcoin. The advantages of Binance and Huobi in the field of exchanges are very obvious, but this advantage has adversely affected them, because the proportion of illegal Bitcoin transactions in these two exchanges is also relatively high, and they are two It is the largest exchange in the world and is subject to KYC regulations, so this may come as a surprise. How do they get so much bitcoin from criminals? First, let's analyze the specific accounts where the two exchanges hold illegal funds.

Overall, Binance and Huobi have more than 300,000 personal accounts that received criminal source bitcoin in 2019. Who is behind these accounts? Are there heavyweight traders among them? Below, we subdivide and classify according to the illegal bitcoin quota received by these exchanges in 2019 (please note that because we connect illegal funds to a specific address, the following picture shows that Binance and Huobi obtained illegal The total value of Bitcoin is about $ 1.1 billion, not $ 1.4 billion. From the figure we can see that a small number of these accounts are very active. The 2,196 accounts in the three highest-income account categories received a total of nearly $ 27.8 billion in bitcoin. The figure also clearly shows that Bitcoin from criminal sources only accounts for a small portion of Binance and Huobi. Despite this, the scale of the illegal bitcoin shown in the above figure is still very large, because in the highest-income account classification in 2019, only 31 accounts were used to obtain more than $ 163 million in bitcoin.

Let's take a look at another version of this chart, which contains funds from accounts that we know are related to illegal activities (that is, the part represented by the red bar chart). Only a small number of accounts received most of the illegal Bitcoin sent to Binance and Huobi, and 810 accounts in the three highest-income account categories received more than USD 919 million in bitcoin from criminal sources, accounting for up to 75%-which "giant whales" are behind these activities?

Our analysis suggests that they may be over-the-counter (OTC) brokers.

OTC brokers mainly promote transactions between individual buyers and sellers. These buyers and sellers are basically unwilling or unwilling to trade on public exchanges. OTC brokers are linked to the exchange but operate independently. If traders want to clear a large number of cryptocurrencies at a set negotiated price, they usually use OTC brokers. OTC brokers are an important source of liquidity in the cryptocurrency market. Although it is impossible to know the size of the OTC market, we know that it is actually very large. A big part of the deal.

The problem, though, is that while most OTC brokers operate legitimate businesses, some of them specialize in providing money laundering services to criminals. Over-the-counter brokers typically have much lower KYC requirements than compliant exchanges, and many of them use this leniency to help criminals launder money and exchange cash. The general operation method is: first exchange Bitcoin or other cryptocurrencies into stable currency Tether, and then convert Tether into fiat currency.

Based on the analysis of various criminal syndicate transactions, we have compiled a list of 100 major OTC brokers. Based on the fact that they have obtained a large amount of cryptocurrencies from illegal sources, we believe that these OTC brokers provide money laundering services. Although this is not an exhaustive list, nor does it list all the OTC brokers who are suspected of committing crimes, but rather a sample we have gathered based on our experience in investigating money laundering-we call it "Rogue 100".

"Rogue 100" has 70 over-the-counter brokers that receive illegal bitcoins from Huobi accounts, 32 of the 810 accounts received the most illegal bitcoins, 20 of which received value in 2019 $ 1 million or more in illegal Bitcoin. In the process, the 70 OTC brokers received a total of $ 194 million in bitcoins from criminal entities. Interestingly, none of these 70 "Rogue 100" accounts run on Binance, although they may have accounts on Binance or other exchanges.

Please keep in mind that "Rogue 100" is just an OTC broker that was manually identified as participating in money laundering during our investigation on behalf of Chainalysis customers. We believe that among other active Binance and Huobi accounts that absorb illegal funds, a significant portion of them are undiscovered OTC brokers. 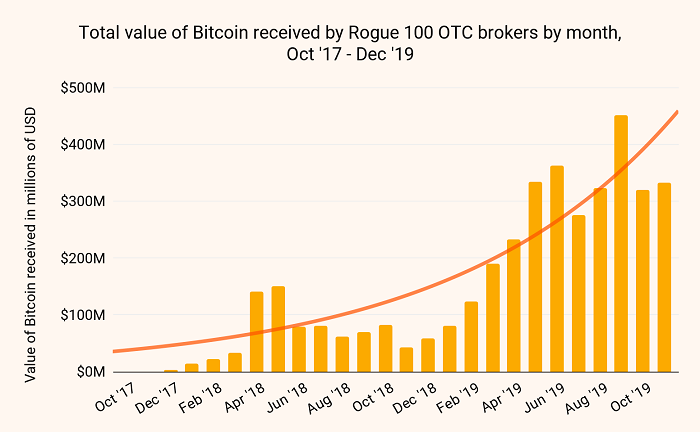 The 100 accounts in "Rogue 100" are very active traders and will have a huge impact on the cryptocurrency ecosystem. The amount of bitcoin they receive each month has been steadily increasing since the end of 2017, but this year's activity has surged. These accounts received more than $ 3 billion in bitcoin in 2019, and many of them played a significant role in the PlusToken scam we discussed earlier. Overall, the funds received by the "Rogue 100" account can account for 1% of all Bitcoin transaction funds in a given month.

By analyzing the "Rogue 100" account transactions in Chainalysis Reactor, we can see how two illegal OTC brokers obtained funds from criminal sources.

On the far left, we see that the funds start from the criminal entity, go through the intermediary wallet, and then transfer to two OTC brokers, both of which are on the Rogue 100 list, and they transfer the cryptocurrency Transfer to Huobi Exchange, where it is most likely converted to cash. Exchanges may treat transactions of illegal OTC brokers as legitimate customers, but from our field intelligence, we know that money launderers and other criminals often conduct large transactions with each other in an attempt to fool Chainalysis and the like through this artificial means. Blockchain analysis software to prevent criminal wallets from being exposed.

Although it is difficult to estimate the specific proportion of cryptocurrencies sent from offender wallets to OTC brokers, our analysis shows that a large percentage of OTC brokers performing bitcoin transactions are receiving illegal funds and that these behaviors are Imply that they want to hide the nature of the transaction.

The money-laundering infrastructure promoted by OTC brokers enables almost all other types of crime-these are covered in the Crypto Crime Report published by Chainalysis. After all, if criminals are unable to cash out the cryptocurrencies they receive through illegal means, the incentive to use cryptocurrencies to launder money will be greatly reduced. Not only does this mean a significant reduction in the number of victims affected by crime, but it will also help increase the reputation of cryptocurrencies as the crypto industry seeks to work with regulators and traditional financial institutions and drive increased adoption.

Fortunately, there are steps that law enforcement, regulators and cryptocurrency companies can take to begin eliminating money laundering-it all starts with transparency. Money laundering is often considered a black box in the fiat currency world, and it can only be opened by obtaining a search warrant and carefully studying the suspect's bank records. However, using a blockchain analysis tool such as Chainalysis, we can analyze transactions recorded on the blockchain and gain insight into how criminals can launder money faster. Law enforcement officers and regulators need to be experts in this technology before they can start cracking down on money laundering in the cryptocurrency industry.

We also call on cryptocurrency exchanges to conduct wider due diligence on OTC brokers and other nested service providers running on their platforms. According to the laws of most jurisdictions, most large exchanges, including Huobi and Binance, are already collecting KYC information about customers. Our analysis shows that these cryptocurrency exchanges will expand the scope of inspections to OTC transactions in the future and ensure that OTC transactions have an effective KYC process in order to play their role in combating money laundering.

Prior to publishing this article, Chainalysis shared the analysis results with Binance, and Samuel Lim, Binance's Chief Compliance Officer, responded as follows:

Binance is committed to clearing financial crimes in cryptocurrencies and improving the health of the industry. We will continue to improve proprietary KYC and anti-money laundering (AML) technologies, as well as third-party tools and partners we work with to further strengthen Binance's compliance standards.

One of Binance's core values ​​is to protect our users, whether by improving platform security or by discontinuing suspicious transactions. Binance recognizes that we have a responsibility to ensure the integrity of the platform and protect the platform from bad actors, including any dealers or brokers who provide money laundering services. As global capital flows into cryptocurrencies, we are aware of the growing trends and trends in illicit funds, and we are working with like-minded partners such as Chainalysis to improve existing systems and resolve these issues.