Editor's Note: The original title was "Application and Investment Scenarios of Bitcoin"

The use and investment attributes of Bitcoin have long been a topic of debate within and outside the industry. The debate on these two attributes is not only academically meaningful, but also commercially meaningful, and it is of reference value to potential investors and holders of Bitcoin.

2. Look at the usage scenarios of Bitcoin from the data

Recently, "Xinhuanet" published an article by Li Lihui, the leader of the China Internet Finance Association's Blockchain Research Working Group and former President of the Bank of China, "Li Lihui: Virtual currencies represented by Bitcoin are destined not to become a popular payment tool ".

This article, which to some extent represents the official point of view, analyzes and explains the trends and highlights of China's digital economy innovation and development from several aspects.

In the article about Bitcoin, there is such a description: "The virtual currency represented by Bitcoin has too much speculative problems, so it is destined not to become a popular or payment tool that can enter public social life, or a so-called This form of currency. "

This points to the huge obstacles Bitcoin has encountered when using promotion in real life. Bitcoin is too speculative, and a direct consequence is that it fluctuates too much against the price of fiat currencies. It is normal to fluctuate 10% or even 20% within a short period of time, such as a month or even a day.

The currency we use in daily life wants its currency value (exchange rate) to be as stable as possible. If the currency used daily fluctuates by 10% or even 20% within a month or even a day, then inflation will cause everyone to rush Commodities, either due to deflation, have caused everyone to be reluctant to have a sharp contraction in liquidity in the consumer market.

So is there any real use case for Bitcoin? Yes, and this scene is not small, but it is in the "dark web world".

According to Chengdu Chain Security, a blockchain security company, in 2019, the use of bitcoin on the dark web reached an all-time high, and more than $ 1 billion in bitcoin was used to engage in illegal transactions on the dark web. The unit price calculation is that nearly 125,000 bitcoins are flowing on the dark web.

Although this number only accounts for 7% of the total bitcoin in circulation (1.81 million), this volume should not be underestimated .

The figure below shows a histogram of blockchain analysis company Chainalysis on the amount of Bitcoin transactions on the dark web from 2011 to 2019. 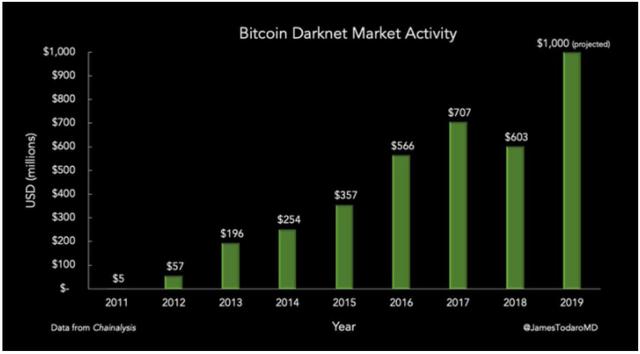 From the figure above, we find that except for 2018, almost all other years have seen a substantial increase in transaction value. Since 2013 (excluding 2018), the annual growth rate has almost been 30% to 40% or even higher. If you follow this range, By 2030, the transaction amount of dark web bitcoin will reach 14 billion U.S. dollars, and the unit price of 8,000 U.S. dollars will be 1.75 million, which is close to 10% of the total circulation .

Therefore, the real massive application market of Bitcoin is on the dark web, and the activities of the dark web will continue to rapidly promote the widespread use and spread of bitcoin in the "other world" , although this is a phenomenon that everyone does not want to see. But it has to face the reality .

After reaching the peak of the previous bull market in December 2017, Bitcoin began to plummet. After a full year of plunge in 2018 and a rally in 2019, it continued to fall. In the opinion of the public, this market has exhausted the popularity of the market. Numerous funds have also been secured.

In this case, what are the true attitudes and actions of investors, especially institutional investors? We still look at the data.

The following figure shows the proportion of funds in various digital currency investments:

From the figure we can see that not only did the investment funds not be intimidated by the bear market in 2019, but continued to increase the capital to buy digital currencies. Firmly occupy the position of king.

However, it is worth noting that compared to Bitcoin investment, the proportion of funds invested in Ethereum is much higher than in other years, which shows that investors are starting to pay more attention to Ethereum .

The following figure shows the investment situation of institutional investors, compliant individual investors, pension funds and family investors in the digital currency field in the fourth quarter and the full year of 2019. It is all year.

In summary, these data clearly show that on the one hand , although the use of bitcoin is not what we like, it is also developing rapidly. On the other hand, investors, especially institutional investors, are still enthusiastic about its investment. No reduction, no fear of bear market, continue to be bullish and increase holdings .