Since 2020, the price of Bitcoin has been rising continuously.

Some people say that it is halving the market. Some people say that under the international tension, the safe-haven nature of bitcoin has become prominent. However, the current situation is easing. Keep up. Data show that from January 1, 2020 to the present (January 18, 2020), Bitcoin has risen by 23.56%. According to the Global Finance Report, this has set the best performance since 2012.

Many people say "Spring is here". However, behind the rally, we have observed that since mid-November last year, the over-the-counter price of the stablecoin USDT (to the RMB) has been in a state of negative premium . In negative terms, this negative premium means that we can buy USDT linked to USD 1: 1 at a rate lower than the exchange rate of USD to RMB.

The data shows that most of the USDT OTC in bull markets has a positive premium . For example, under the 17-year bull market, the premium rate of USDT OTC was as high as + 5.76%. In a bear market, USDT is generally a negative premium . According to OKEx legal currency transactions, District transaction data. On October 16, 2018, from 1 pm to 2:30 pm, USDT / CNY dropped directly from 6.70 to 6.20, with a premium rate of -8%. Obviously, the negative premium this time is different from the usual logic.

It is worth mentioning that the USDT-US dollar premium index has remained relatively stable. According to data from the Bitcoin trading platform KRAKEN, the volatility of USDTUSD has remained within 0.1% since 2020. 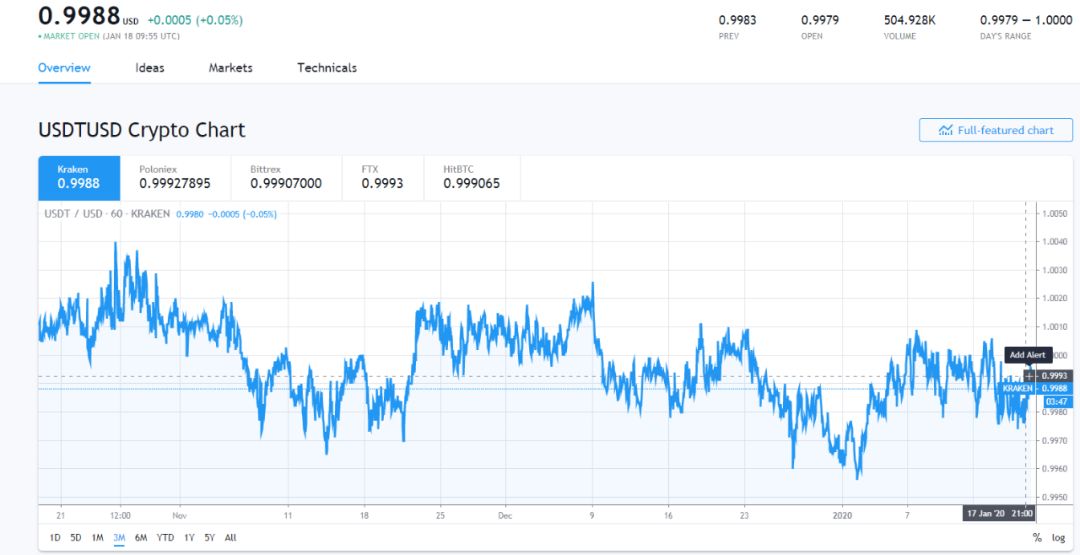 The stable currency is not stable, and a slight negative premium is normal, but it is completely different from the USDT's slight premium to the US dollar. At present, the price of the USDT OTC market is 6.78 RMB. Compared with the offshore RMB exchange rate of 6.86, the current USDT premium index It was -1.18%, and the premium index was as low as -3% around January 11, which was a new low of more than half a year , showing the depth of its negative premium.

Data source: ChaiNext "USDT discount premium index is calculated by ChaiNext based on the over-the-counter price of USDT and the offshore RMB exchange rate. It is the percentage ratio of USDT to USD and reflects the degree of congestion of funds entering and leaving the token market. When the index is 100, it means USDT Parity. An index greater than 100 indicates a USDT premium, and less than 100 indicates a USDT discount. "

And recently the exchange rate of the US dollar against the RMB has fallen sharply, and the RMB has appreciated significantly. Some people in the currency circle have teased about this: even if they have USDT in short positions, they can't escape the fate of being cut .

Having said that, it is clear that the current currency price is rising, and the USDT's premium on the RMB continues to be negative. What is the reason for this?

It should be known that in the current market, the exchanges settled in US dollars are mainly Coinbase in the United States, which allows users to directly use fiat currencies to trade , and users can directly deposit US dollars to exchanges to buy cryptocurrencies. Many other exchanges with large trading volume usually use USDT to settle, such as Binance, Huobi, OKEX, etc., which are all currency transactions . You need to exchange legal currency into USDT on the OTC and deposit them in the exchange. Chainalysis reports that 99% of Bitcoin spot transactions in China are settled in USDT due to the environment and other factors . USDT is the main channel for RMB deposits.

Therefore, from the perspective of the domestic market , the negative premium of RMB against USDT can be understood as the flight of RMB funds.

Some people think that this is pessimistic about the crypto market, but this statement is hard to stand by. The first is that the current market situation is improving, and the halving market has been hyped by many parties. Alternative.me data shows that the current market sentiment has changed from panic to neutral. Secondly, although Tether, the issuer of USDT, has been deeply involved in trust crises such as counterfeit US dollar reserves, but this year, no serious negative events have occurred and the timing of the recent negative premium situation is not consistent. 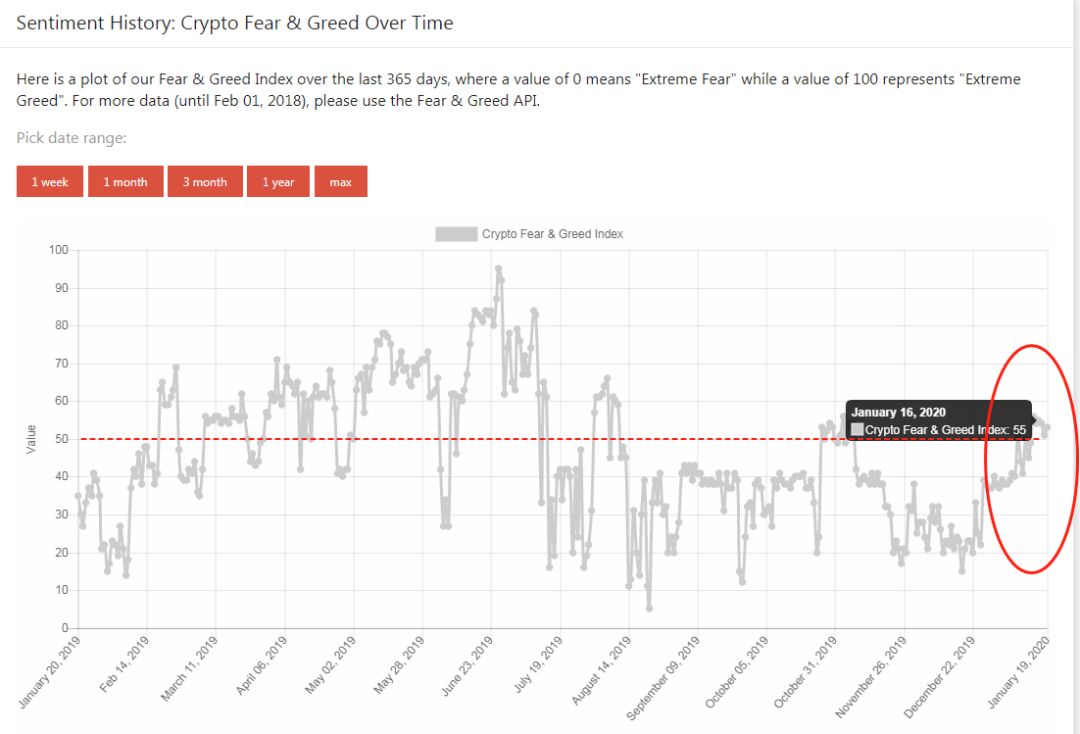 From the perspective of the international market , in addition to the USDT Bricks Party in the market, there are also the BTC Bricks Party. Based on the previous analysis of the positive and negative premiums of USDT by Zhao Dong (Weibo @ 赵 乐天), a big circle of currency, because there is a delay between the USD deposit and the exchange of USDT deposit with other legal currencies, the price difference between BTCUSD and BTCUSDT will occur. . When BTCUSD is greater than BTCUSDT, there is arbitrage at this time. The BTC Bricks Party sells BTCUSD in exchange for USD, and then uses USD to buy USDT, which results in the issuance of USDT and a negative premium for USDT.

However, according to the analysis of the USDT's premium to the US dollar, the USDT's premium index to the US dollar has remained relatively stable. In arbitrage, in addition to the premium, you also need to deduct transaction costs (handling fees, etc.), and you also need to consider the risk of excessive fluctuations of the US dollar against the RMB exchange rate . According to data from the Bitcoin trading platform KRAKEN, the volatility of USDTUSD has been kept within 0.1% since 2020. At this time, USDT obviously does not constitute a considerable arbitrage space for the US dollar. Those who move bricks are also afraid of making money and smashing their feet. Therefore, the credibility of BTC's move is questionable.

Another relatively reliable argument is that the negative over-the-counter USDT premium is the result of a large amount of funds eager to cash out . The sharp fall in the over-the-counter price of USDT shows that the inflow of external funds has a periodical "break-off", and the over-the-counter investors have "resistance" for entering the market. The Weibo V @ blockchain William of the currency circle has posted a blog, believing that this is due to the approach of the Chinese New Year, "sold coins for the New Year."

If this is a story of "sold coins for the New Year", it is worth studying. We observe the same negative premium situation around the Spring Festival last year (around February 5, 2019).

William has a comment under this Weibo, speculating on the current behavior, saying that this may be caused by the act of drawing off funds to repay the loan.

At the same time, he also believed that the reason why the USDT Bricks Party did not see the negative premium level this time was because of pessimistic expectations of the US dollar. The US dollar continued to weaken in December. ABN Amro had previously predicted that due to the easing of the trade situation and signs of improvement in the global economy, the need for safe-haven was suppressed. In this case, the dollar is likely to expand.

Source of USD trend data for the past three months: Sina Finance

Coupled with the instability of the brick-moving time period, the brick-moving parties were concerned that after the yuan was exchanged for USDT, the dollar price fell and became unprofitable, which also explained why the negative premium would continue.

So, digging into the reasons behind the USDT's continued negative premium, we are inclined to have large capitals, weak new funding, coupled with the recent weakening of the U.S. dollar, lack of confidence and lack of incentives to move the party, and failed to equalize the premium in time.

This tells us a big thing. The country will soon be caught in the Western media and pessimistic economists predict that factories will be shut down, shops will be closed, the stock market will not be traded, and the street will be filled with the strong smell of gunpowder left by explosives. The team went to ask for money, and various creditors began to demand debt everywhere. We were anxious to convert USDT into RMB and then food. People call this phenomenon Partner of Blockchain Capital: The value of Bitcoin will be much higher than today in the next two to five years 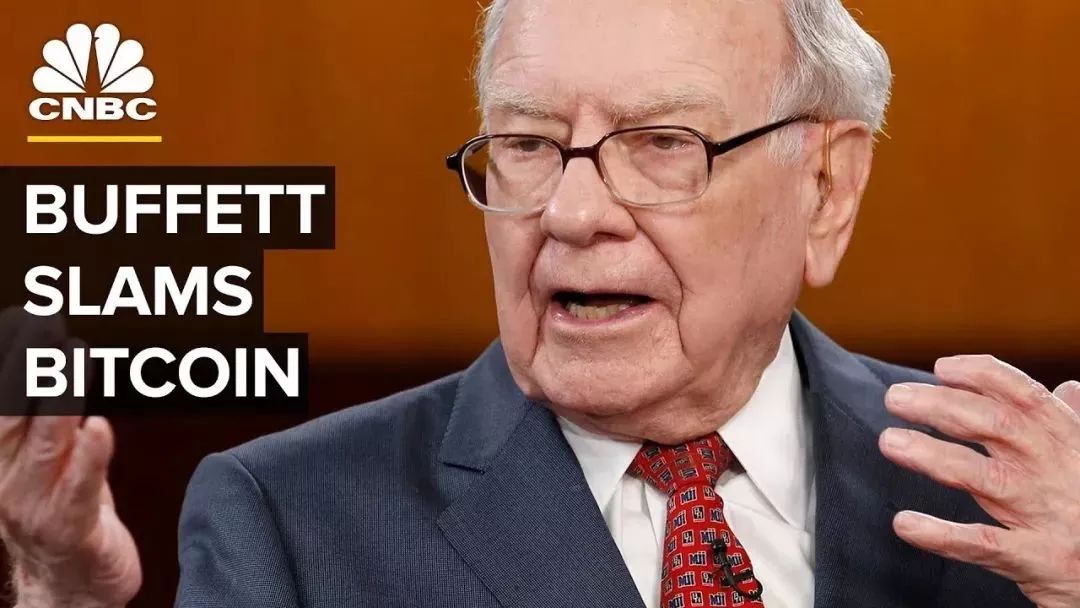 Coin Safety: The KYC data transmitted by the telegraph group does not match the information of the Coin Security System and is currently under investigation.

Li Xiaofeng: It is recommended to promote the blockchain standardization evaluation from the technical aspect.