At the beginning of 2020, the most anticipated star projects are Poca and Filecoin. At least 10 exchanges have listed DOT's IOU futures. With the IPFS test online, miners have already sharpened their hearts.

IOU stands for I owe you, which means "I owe you". The exchange sells futures with no online tokens through this form, and promises to deliver real tokens after the project goes online. In short, IOU is equivalent to An IOU backed by the reputation of the exchange. Prior to the launch of real tokens, IOUs can only be traded on the exchange's internal disks, usually unable to deposit and withdraw, and lack trading depth. Therefore, whether in the short term, the price of private placements is up to hundreds of times, or the seemingly beautiful spread between IOUs across exchanges, Neither has too strong reference significance.

During the development of the project, the importance of the crypto community is self-evident. The crypto community includes developers, investment institutions, analysts, and the media, as well as ordinary small leeks that focus on technology, which together constitute the future crypto ecosystem The basics. It is undeniable that community members holding project token shares in their hands are more likely to generate attention and contribute to the project due to incentives.

Many individual investors are difficult to become early qualified investors in most cases due to legal reasons. Many proponents of high-quality projects want to recharge their faith at a suitable price, but they have no money, and the secondary market is still in the foreseeable future. Moreover, when the secondary market goes online, the currency price is affected by multiple factors. Once speculative funds enter the market, the currency price is likely to fluctuate significantly, deviating from the expected valuation of the project. Therefore, many people choose to trade investment shares in the OTC market privately. The transaction price is a consensus reached by the buyer and the seller after taking into account factors such as the first-level fundraising price, hedging margin, current market conditions, and delivery risks. It is the same as OTC's private trading channels. The exchange IOU can also be regarded as a product born on demand.

But now we look back at some projects that have issued IOUs on the exchange and officially launched the secondary market, hoping to provide some references for investors who are willing to buy futures.

In April 2019, Bgogo announced the sale of Algorand token ALGO futures through the form of IEO, claiming that the tokens are from the quota of its early investors, and set the price to be 5 cents equal to the early private equity price. To be honest is the price of conscience. However, Algorand officially issued a statement denying that the team had sold tokens. At the same time, the Bgogo statement stated that early Algorand investors who were willing to transfer the quota were warned by the project party that they cannot transfer the ALGO tokens that are not currently unlocked, otherwise they will be deemed to be in default and lose their own tokens. However, Bgogo hopes to continue the IEO and to invest in the purchase of ALGO tokens directly from the secondary market within one month after the Algorand mainnet launch. ALGO tokens will no longer come directly from early investors in the Algorand project.

Most of the project parties' vague attitudes to the exchange's IOU sales are "unofficial authorization, irrelevant to me, and at their own risk". It is also rare for project parties to strongly condemn and threaten early investors with the loss of tokens, like Algorand. Through the operations performed after Algorand, we can make reasonable guesses. One of the reasons for the strong response of the project party is that Algorand should have begun to prepare its own token sales at that time, that is, the Dutch auction officially released in June 2019. The auction rules It is also a game that tests the psychological price of the market. The first Dutch auction eventually sold $ 60 million in tokens for $ 2.4 million. It is conceivable that if ALGO futures with an initial price of 0.05 US dollars flow into the market in advance, it will inevitably disrupt the sales plan of the Algorand project party.

Although Bgogo first insisted on issuing ALGO in the statement, and countered Algorand's official intervention with the analogy of "Exchange trading Bitcoin does not require permission from Satoshi Nakamoto", in the end, for various reasons, this issue of the IEO project was Low-key replacement, ALGO's futures issue eventually aborted. 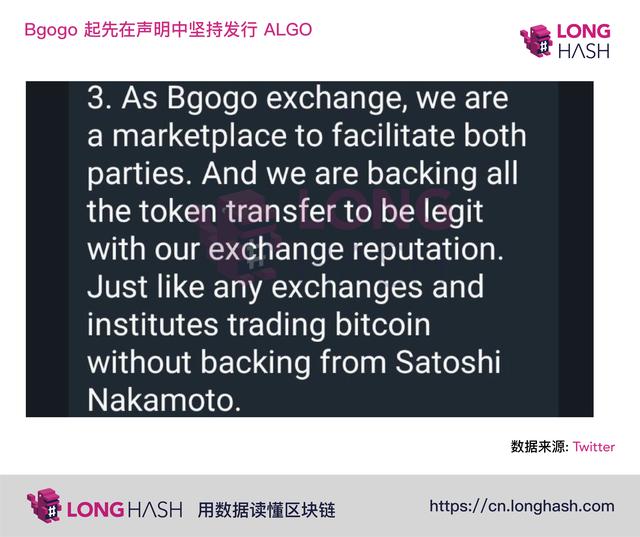 As early as September 2018, the Tokok Exchange has launched the ETH trading pair of Blockstack's futures STX. On November 17, 2018, as the tokens of STX early investors began to be issued, the Tokok Exchange announced the issuance of STX / ETH's subscription share and price data also tend to be reasonable. On April 16, 2019, Tokok issued an announcement to open the STX withdrawal delivery of the unlocked part, although the total amount is limited and the withdrawal fee is relatively high. On July 11, 2019, Blockstack became the first compliance project to pass the SEC RegA +. At the same time, it announced the price of the issued token, which was issued to holders of early token coupons of $ 0.12 and $ 0.3 to Gao. Net asset investors are unlocked linearly within two years. On October 23, 2019, STX announced that it will launch Binance and Hashkey Pro exchanges. STX's futures prices also clearly and timely reflected these benefits. STX futures on Tokok have been trading for up to one year before the secondary market is officially launched. From the perspective of price rationality and delivery situation, the historical mission of IOU has been successfully completed at least in a small range. The price of early STX futures was generally lower than the last round of public offering price of 0.3 US dollars and there was no lock-up limit, and there were even greater profit opportunities. This aspect stems from the limited total amount of STX withdrawals opened by the Tokok Exchange, which proves that the Tokok Exchange has the true STX acceptance capability. On the other hand, Blockstack's private and public price data is open and transparent, and investors' psychological price formation can be traced. Before the official launch of the secondary level, the market has formed a certain price consensus.

The futures of the orchid protocol token OXT were listed on Tokok on November 22, and the price was as high as 13-14 US dollars. On December 14, only one month, the OXT spot was officially launched. The previous Uranus-level project was a bit too quiet this time. The 20-day 13-14 USD OXT futures also acted as a one-man show on the exchange.

Similar to OXT, the futures of tokens such as CELR and ATOM in the Tokok Exchange are announced for sale one month or less before the official launch of the tokens on the secondary market. Possibility, because the transaction time is too short and the attention is low, it cannot reflect the fair value of the token.

There are many doubts in the market about the exchange issuing IOU.

The IOU projects that are listed are well-known star products, and the IOU exchanges issued are often small and medium-sized exchanges that are not well-known and urgently need traffic. Therefore, the exchanges will inevitably be criticized by the enthusiasm of the project and generosity of others. It is obviously inappropriate for the Bgogo exchange to compare the listing of ALGO futures with the listing of Bitcoin. After all, Bitcoin is real in the exchange, and the biggest doubt on the issue of IOUs is how the trading platform should honor its commitments.

According to the information disclosed by the exchange's public statement, one of the possible sources of IOU's tokens is that the main body behind the exchange has an investment quota for the currency, or reached internal cooperation with some early investors. These early investors are willing to transfer some of their quotas. The exchange provides a matching platform to "pre-sell" the quotas that early investors will receive in the future. In other words, early investors bought token futures from the project official, and these investors then put these futures on the exchange and sold them in the form of futures, locking in part of the proceeds in advance and passing on the risks.

While exchanges are often vague about the origin of futures, there is also the possibility that the exchange does not have, or at least does not have, a sufficient amount of tokens. After the project's tokens go online, in order to ensure the delivery of the tokens, the exchange will purchase tokens on the secondary market and issue them to IOU investors. There is a certain price risk for the exchange, but if the project's attention is high enough, the traffic income brought to the exchange is also considerable. If there is not even futures support from the project side behind the futures, we can only hope that the integrity of the exchange.

The exchange purchases of futures in the form of IOUs are essentially "futures futures". Delivery problems may occur at any stage of the process from the project party to early investors, to the exchange and futures buyers. There is no doubt that Starting from the secondary market spot, investors have to bear higher risks. There have been cases of rollovers in the release of IOU futures of well-known projects in the past, and it is also possible to provide investors with a good time to enter. We will not provide any investment advice here. We also hope that you will carefully evaluate factors such as time cost, project progress, early investor prices, etc., and identify the credibility of the exchange before making a decision. Reading these is more important than "Can IOU buy?" Problem, in order to choose the investment method that suits you.

Below the Reg A+ and…

US compliant project Blockstack on…

The first Reg A+ ICO-based…

The data shows that the relationship between Ethereum and BTC is up to 180 days, and the growth rate of new addresses is slowing down.

Former Chairman of the United States CFTC: Now is the time for the Federal Reserve to issue digital currencies