In 2019, the Zero One Fintech Investment and Financing Index (01GFI) reached the highest value of 180 in June, the second highest point in March was 179, and then fluctuated around 160. The latest index in December was 151.

· According to incomplete statistics from Zero One Think Tank, at least 1166 financings (another 55 mergers and acquisitions) occurred in the global financial technology sector in 2019, a decrease of 46 from 2018; the total amount of publicly disclosed financing was approximately 261.9 billion yuan, a decrease of 1212 from 2018. Billion yuan. The peak of the amount and amount of financing for the whole year appeared in July, with 134 financings involving a total amount of 41.9 billion yuan.

I. One One Global Fintech Investment and Financing Index (01GFI)

Figure 1: Trends of the Fintech Investment and Financing Index (01GFI) over the years 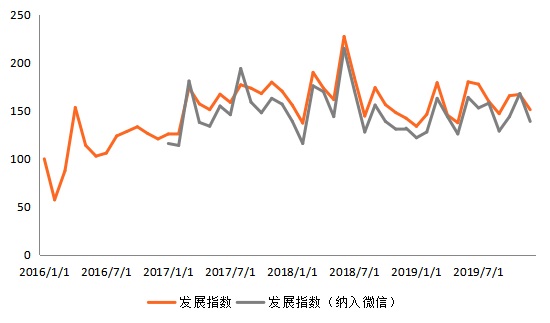 Note: 01GFI (01 Global Fintech Index) is the first domestic fintech index launched by Zero One Finance? The index is based on January 2016 with a base of 100 and is published monthly. See the standard for details: http://www.01caijing.com/article/38862.htm

In 2019, the Zero One Fintech Investment and Financing Index (01GFI) showed a volatile trend. The index reached a peak of 180 in June, a second high of 179 in March, and fluctuated around 160 in the second half of the year. The GFI after the inclusion of the WeChat index is similar to the overall trend before it was included, reaching a peak of 168 in November.

Figure 2: Trends of 2019 One One Fintech Investment and Financing Index (01GFI) 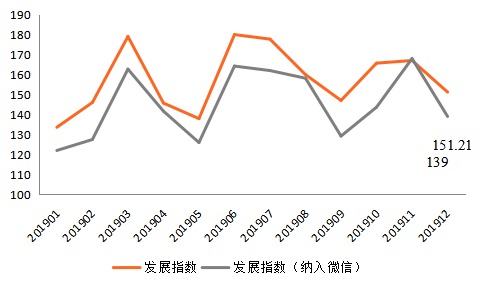 Overview of global fintech financing from 2015 to 2019

1. Financing fever is increasing year by year, hitting a record high in 2018

According to incomplete statistics of the Zero One Think Tank, the number of global fintech investment and financing and the total amount of publicly disclosed financing increased from 2015 to 2018, and there was a slight decline in 2019, but the amount of financing was still at a high level.

Figure 3: Global Fintech Financing Volume and Amount from 2015 to 2019 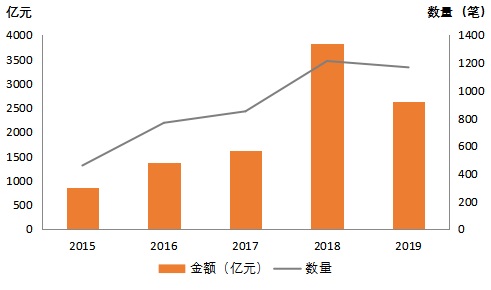 2018 is undoubtedly a year of rapid development for the global fintech industry. A total of 1,212 projects worldwide received a total of 383.1 billion yuan in financing, an increase of 43% over the amount of financing in 2017. It is particularly noteworthy that Ant Financial's Pre-IPO financing amounted to US $ 14 billion, accounting for 25% of the total financing amount in 2018.

Figure 4: Number and amount of FinTech financing at home and abroad in 2019 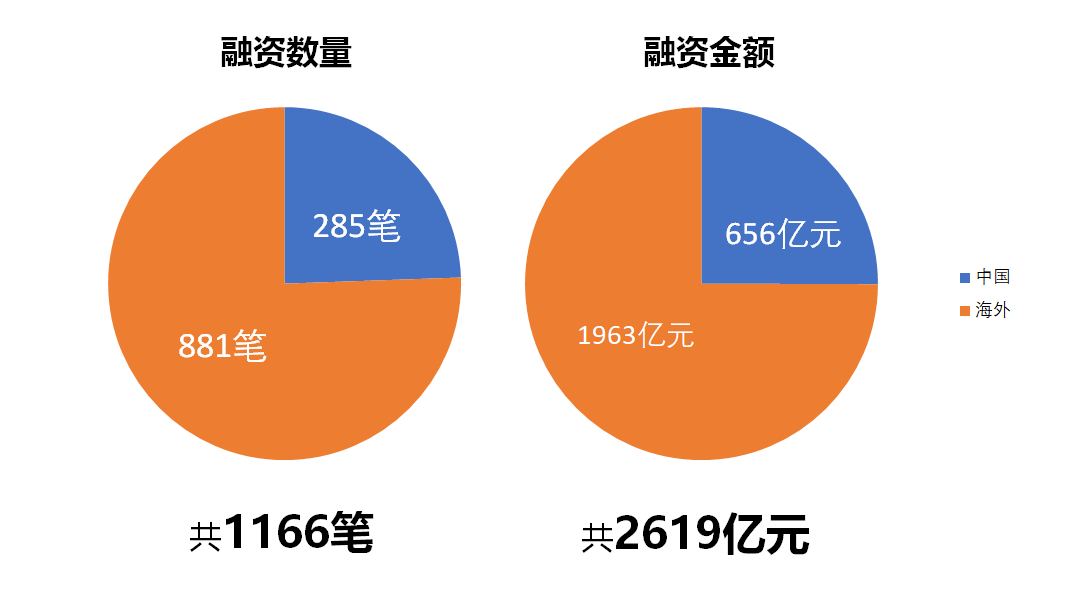 The global fintech financing volume has stabilized in 2019 after undergoing significant fluctuations in 2018, and the overall amount and amount of financing in the second half of 2019 are slightly higher than the first half. 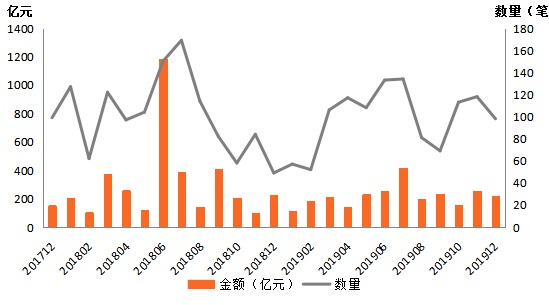 Note: For the convenience of statistics, this article converts foreign currencies into RMB at the opening exchange rate on the last trading day of the month in which the financing is disclosed. The same applies below.

Analysis of Global Fintech Financing and M & A in 2019

Figure 6: Number and amount of financing in fintech in various countries in 2019 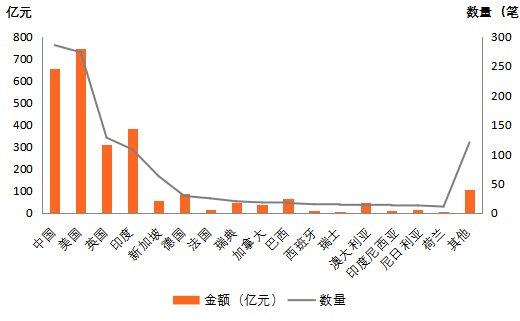 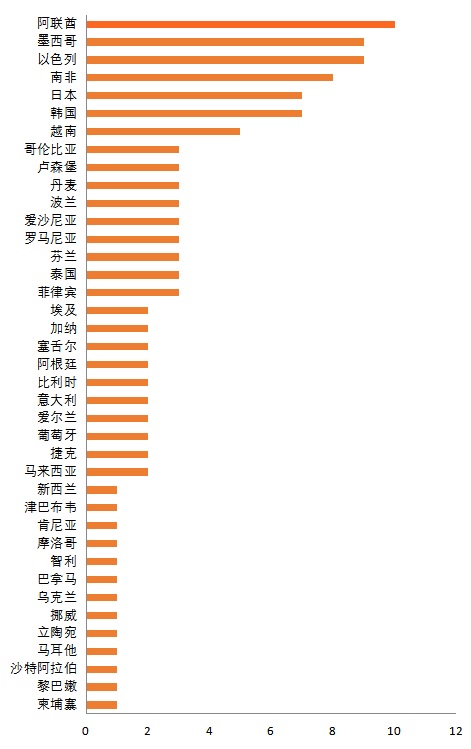 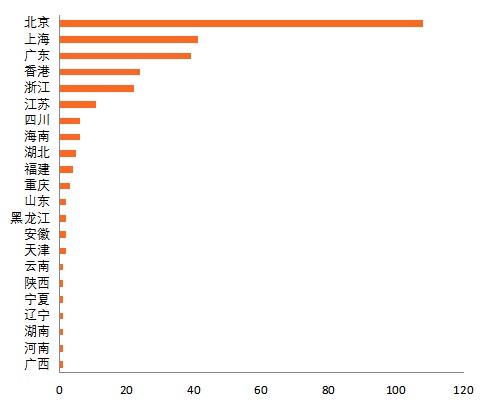 2. Online lending and payment fields are popular with capital, and the number of blockchain investment and financing ranks first

Figure 9: Number and amount of financing in the hot segment in 2019 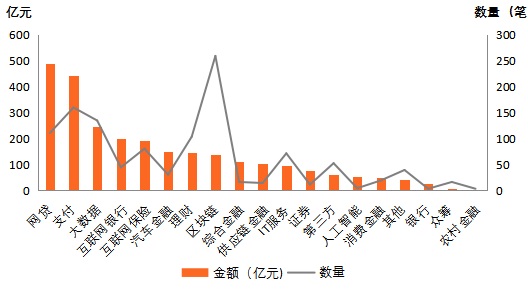 Note: A company / project may involve multiple business types. For convenience, we make corresponding statistics for its main business.

Although the blockchain field has only 13.6 billion yuan in financing, the number of projects invested has reached 258, ranking first. Followed by payment and big data, there were 159 and 134, respectively.

The auto finance boom is rising. Although there were only 30 financings in the year, the total funds involved reached 14.9 billion yuan. In contrast, crowdfunding has been cold-shouldered, with 16 financings, but the total amount is only 179 million yuan. 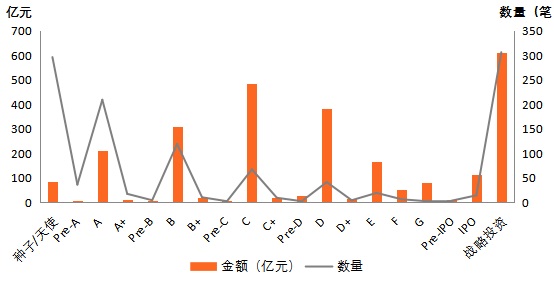 There were 167 rounds of C rounds and subsequent rounds, of which 55 were in the US (1 IPO), accounting for 33%; China had 52 (13 IPOs), accounting for 31%. There were 13 rounds of financing in the E, F, and G rounds in the United States and only 2 in China. Taken as a whole, the maturity of the US fintech investment and financing market is relatively high.

4. 55 mergers and acquisitions occurred in the second half of the year, with China and the United States accounting for 60%

According to the incomplete statistics of the Zero One Think Tank, in 2019, the global fintech industry conducted a total of 55 M & A transactions with a total value of more than 73.8 billion yuan (only publicly disclosed amounts are counted). There were only 5 M & A events in the first half of the year, and 49 in the second half, accounting for 89% of the total. 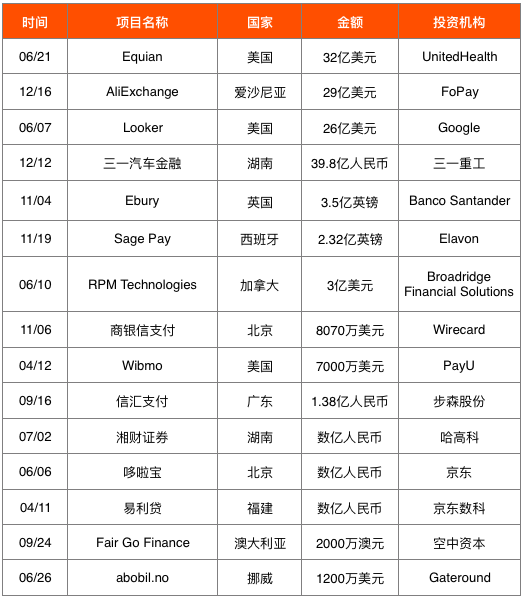 There were 23 mergers and acquisitions in China, the largest number, followed by the United States (10). The largest M & A transaction was June 21 when United Health Group Inc. (UNH) spent about $ 3.2 billion to acquire American healthcare payment company Equian LLC from a private equity firm.

Although the number and amount of investment and financing have declined compared to the overall investment, large-scale financing of investment cases in 2019 is not a minority, and at least 100 Fintech companies / projects have received more than 100 million US dollars in financing. 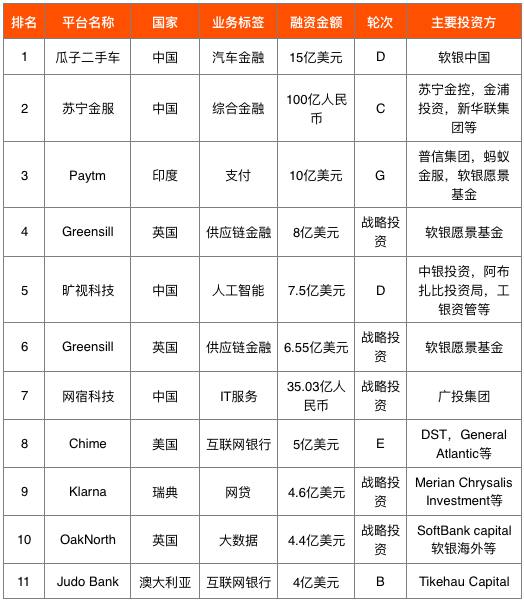 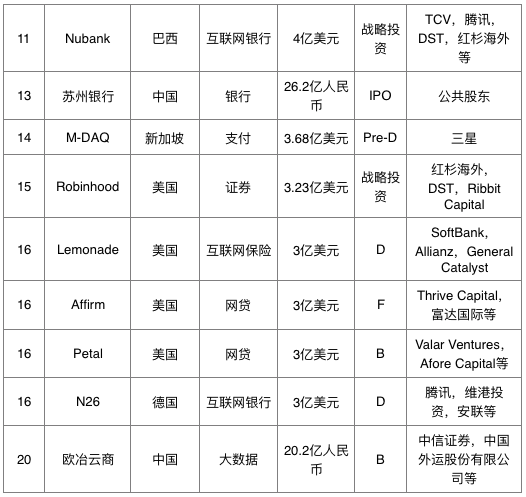 It can be seen from the distribution of rounds that large-scale financing of fintech is more concentrated in the higher rounds. In addition to strategic investment, round D and above account for 40%. In contrast, round B can get 3 There are only three companies with more than US $ 100 million in financing: Australian internet bank Judo Bank, US online loan platform Petal, and Shanghai Big Data service platform Ouye Cloud Merchants.