Source of this article: BlockBeats

According to information from DigixGlobal's official website, the voting on DigixDAO (DGD) holders to decide whether to liquidate DGD's Ethereum funds has ended. From the results, consent to dissolution has become a foregone conclusion.

It is understood that DigixDAO is the first "distributed autonomous organization" of Ethereum. IC0 was completed as early as March 2016, and a total of 465,134 Ethereum (valued at about $ 5.5 million at the time) were raised. The purpose of the project is to place "gold in On the blockchain. "

The project designed two types of token economy, including DGX, a token secured by physical gold stored in a safe house in Singapore, which can be exchanged for physical gold measured at 100% gold. DGD-DigixDAO's governance token, representing equity, holders have the right to participate in company decisions and participate in DAO matters by voting.In addition, they can receive digital gold GDX transaction fees and demurrage fees as a return on equity.

The project created and launched DGX in 2018 and successfully created the DigixDAO platform in March 2019. Among them, DigixGlobal is the company behind it. According to the official statement, so far, more than 50 projects have been submitted on DigixDAO to develop the DGX ecosystem.

However, during the course of the project, some people have made suggestions in the hope that the DGD held by them can be "burned" and replaced with DigitDAO's ETH, and even called for the complete dissolution of the entire DAO. In late November of last year, the operating company considered to fully liquidate its stored tokens and return the remaining funds to the DGD token holders.

From the official website message, there are probably several reasons for the holders to vote. The first is that the DAO is very large. In fact, the efficiency, quality and continuity of the proposal cannot be guaranteed. The popularity of the community is seriously insufficient, and it has become a large household withdrawal. In addition, the DAO website has high barriers to use, and the official team's performance is disappointing. In addition, there are even messages saying, "This may be the last chance to protect your investment."

Although the company's position is against it, the community's proposal is still to dissolve DigixDAO. According to official sources, even if DigixDAO is disbanded, the core business of asset tokenization and DGX will remain, and any project that is interested in suggesting ideas to expand the ecology can still keep going. And DGD token holders can request the corresponding proportion of the remaining ETH in DigixDAO according to the amount of DGD they hold (the proportion of 0.193124288 ETH equivalent to 1DGD).

According to the officially announced information, all Ethereum in DigixDAO (excluding the 2 Ethereum required for each project at the time of submission-this part will be directly returned to the sponsor's address). The refund will begin at the end of the current quarter, The latest unlocking time was March 24th, and more details of the unlocking were subsequently announced by the project party.

Of course, DGD holders can also use MyEtherWallet wallet to manually initiate a transaction to mark the DGD to be unlocked. In addition, all projects that have been funded and are in the process of review will cease, and DGD will no longer be of value in use and will no longer have benefits. The audited smart contract address mentioned above is: https://github.com/DigixGlobal/dao-contracts/tree/mainnet-production

According to the official website ’s fourth quarter data, DigixDAO ’s capital is about 50,000 ETH, which is about $ 8.5 million, and there are still more than 60 days before the 90-day unlock time, so this part of ETH will not flow into the market for a short time. But it does not rule out new changes in the future. 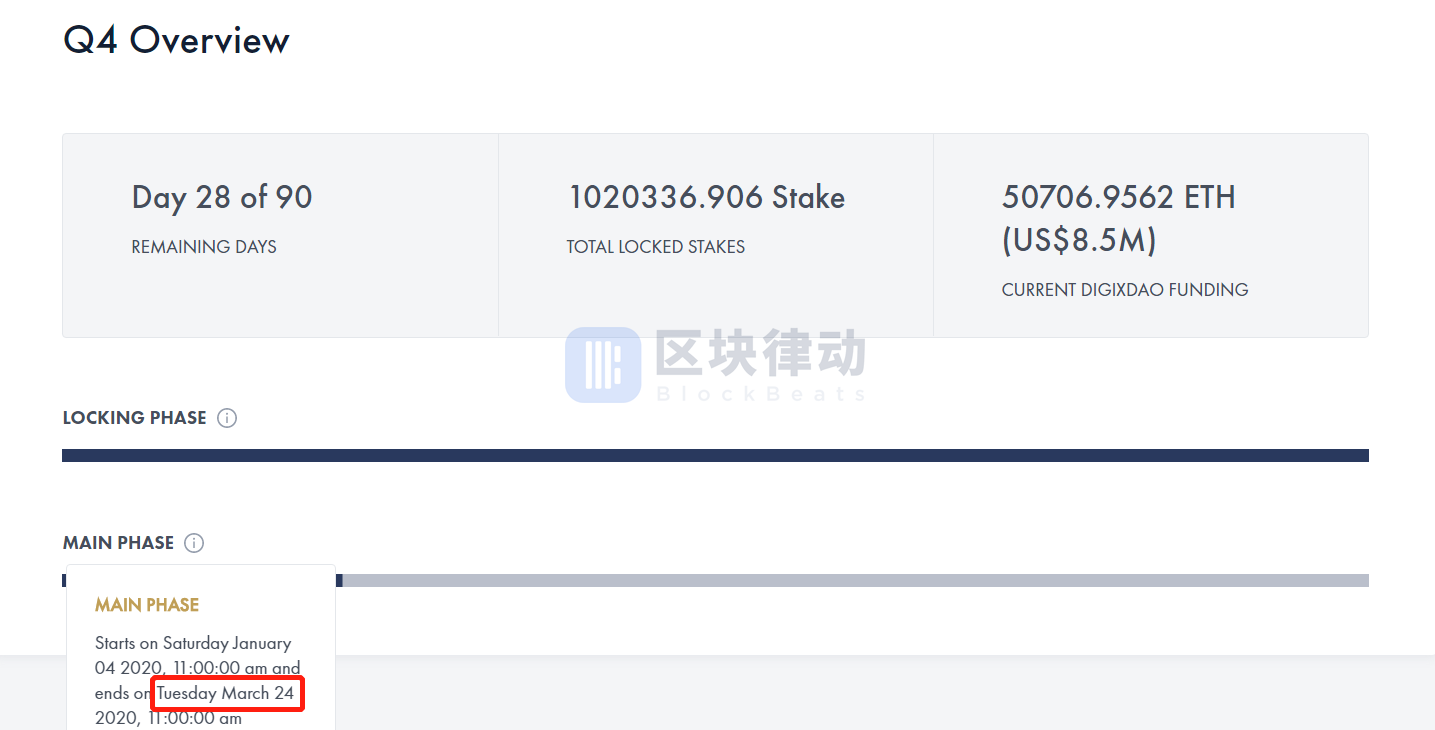 According to the two addresses on ethscanner, DigixDAO currently owns 380,000 ETH (worth about $ 63 million).

BlockBeats reminded that according to the document issued by the CBRC and other five departments in August 2018 on "Precautions against Risks of Illegal Fundraising in the Name of" Virtual Currency "and" Blockchain "", the general public is requested to take a rational view of blockchain Don't blindly believe in the promise of skyrocketing, establish the correct currency concept and investment concept, and effectively raise the risk awareness; you can actively report to the relevant departments to report the clues of violations and crimes.

Analysis: About 61% of BTC holders can benefit when they sell, and those who buy low are the biggest ones.