As the value liquidity of crypto assets continues to unlock globally, it is not surprising that innovative assets have begun to bear fruit. Thanks to the emergence of a large number of tools such as smart contracts, DEX and web3, individuals have the opportunity to monetize their time and career in an unprecedented way. 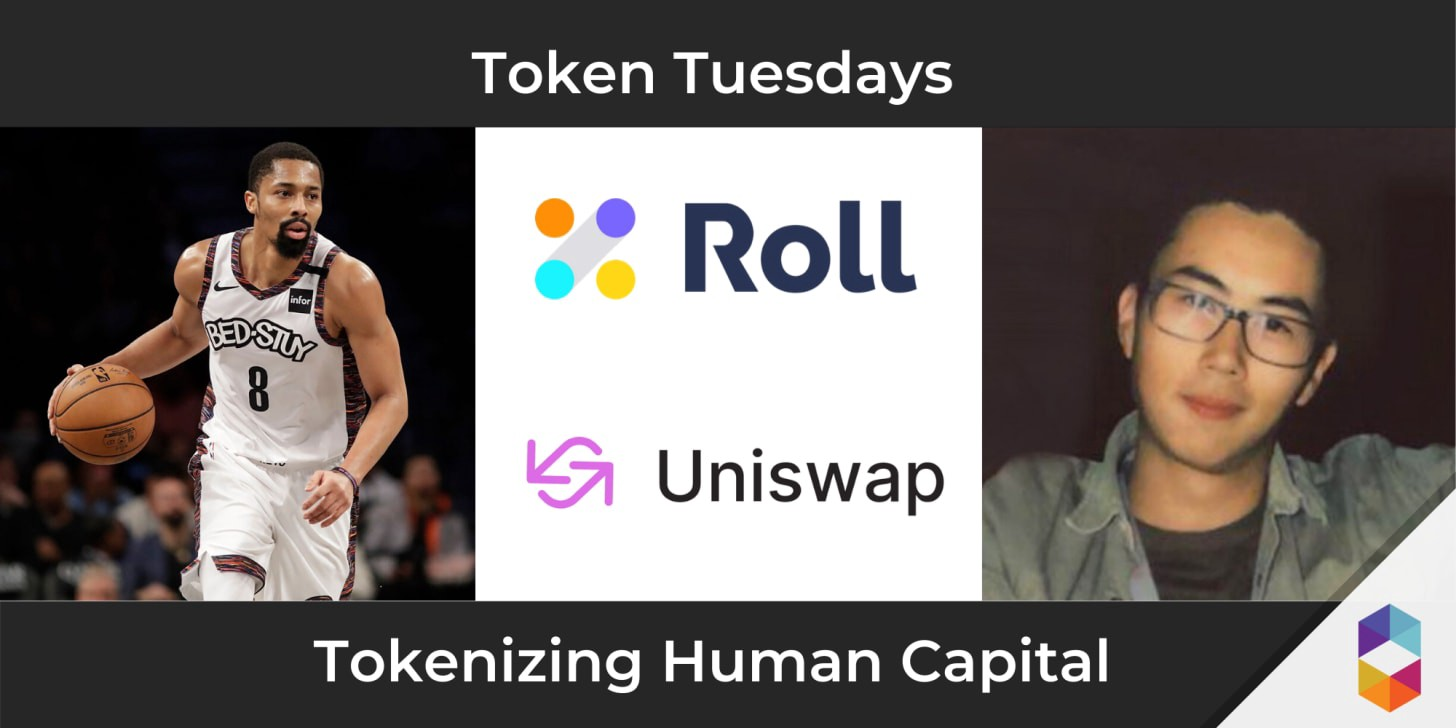 Although the concept of creating a new currency was once considered inconceivable (think of the time, expertise, trust and liquidity required to create a trusted value form), such as Ethereum, it has established a sound smart contract protocol Standard (ERC Tokens), so that it becomes extremely easy to achieve value circulation for individuals on a global scale.

Therefore, we are now seeing the emergence of time tokenization and Income Sharing Agreements (ISA), which we believe belongs to the category of web3 human capital contracts (HCC).

[Investor] may "purchase" a portion of his equity in the prospect of personal income: prepaid funds necessary for his ability (or work), provided he agrees to pay a certain share of his income to the lender in the future. In this way, the lender can obtain more economic return from the relatively successful individual than the initial investment, thereby making up for the loss of failing to recover the initial investment from the loser. — From Milton Friedman's 1955 "The Role of Government in Education"

Coupled with the new platform that allows individuals to tokenize their time and career without the need for high capital expenditures or expertise, we believe that protocols like Ethereum will further promote the development of self-sovereignty. In this article we will cover:

We have a lot to say, let's get started!

After months of negotiations with the NBA, we finally saw Brooklyn Nets player Spencer Dinwiddie sign his NBA contract in Ethereum.

Dinwiddie from CU Buff has agreed to sell a token representing his income interest as part of a $ 35.4 million NBA contract he signed under Reg D 506 (c). Although the ultimate goal is to create a license-free investment vehicle, due to the special nature of tokens, only US-certified investors can participate in the offering.

As a result, Dinwiddie's Tokenized Bonds sell for approximately $ 150,000 per token, and the maximum participant limit is 90. In this transaction, investors will receive a monthly return of 4.95% (the full principal is paid off at maturity), while Dinwiddie received an advance payment of $ 13.5 million in its 3-year contract. In addition, Dinwiddie also plans to rebate some privileges to token holders , such as taking them to All-Star Weekend in February. 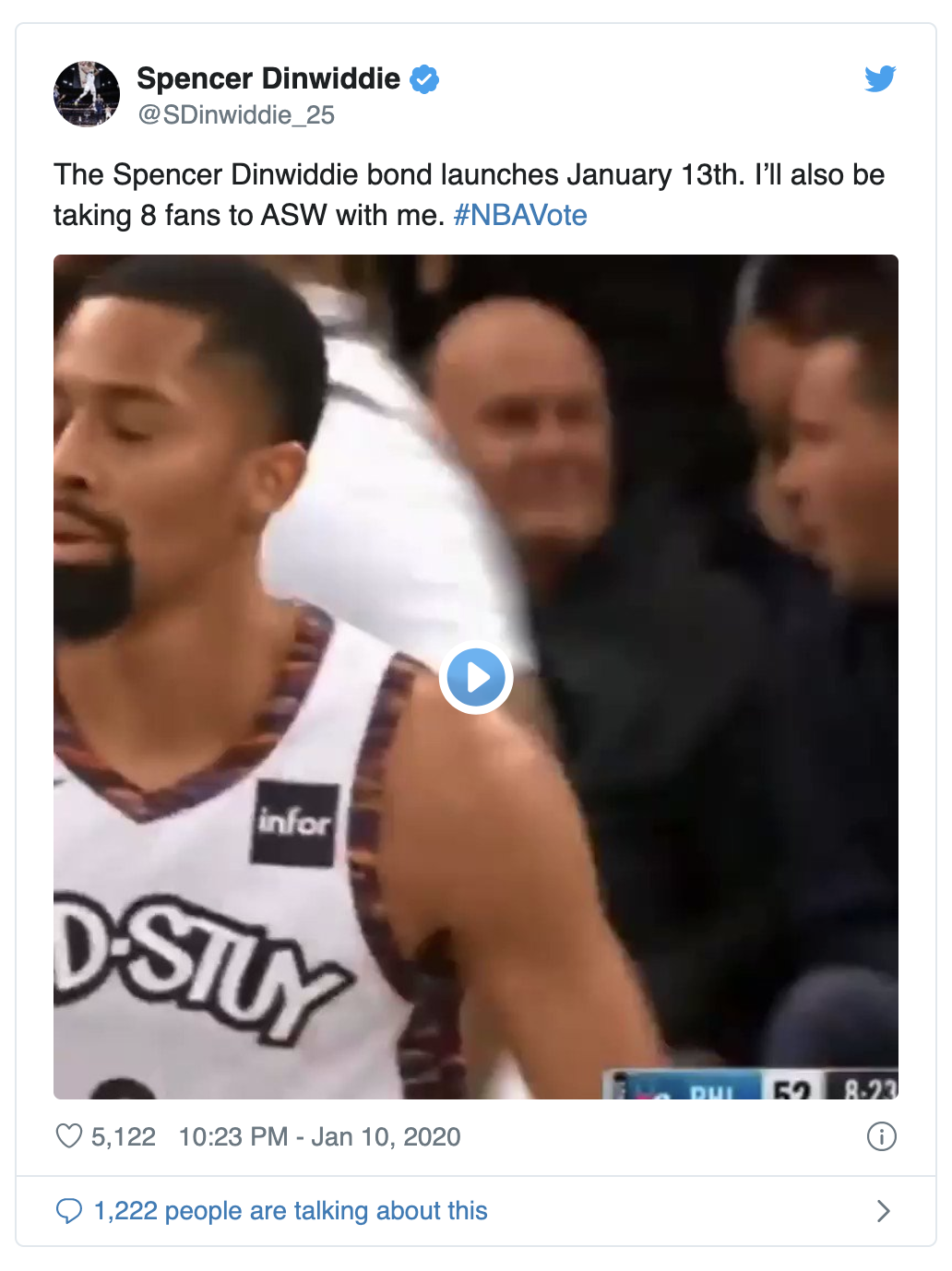 Like most innovators, because this asset class is too early, Dinwiddie's tokenized products are severely restricted by traditional entities (NBA). Initially, it included potential bonuses (such as the Nets entering the playoffs) and his third year of player options. If Dinwiddie can use player options to talk about more favorable contracts, investors will see a lot of room for investment to rise.

In essence, this will allow investors to speculate on his future contract revenue, to put it plainly, linking the price of Token to his performance on the pitch.

Although this case is not perfect, because the NBA forced Dinwiddie to cancel player options on the grounds of suspected gambling, there is no doubt that Dinwiddie is an innovator and he has opened the way to a decentralized and tokenized future.

For his next round of financing, or for any player who intends to follow his pace, this model has much room for improvement. By applying Reg A or Reg A +, the barrier to entry will be greatly reduced, as uncertified investors will be able to participate. Furthermore, if more speculative content is embedded in the product (such as player options), fans can directly invest in the expected success of their favorite players.

But let's look at examples of other community members and projects taking advantage of this new web3 protocol.

There are so few talents to find great designers who are really interested in the emerging Ethereum space , and dApp Boi by Matthew Vernon is focusing on this.

In the past year, Matt has issued 100 BOI Tokens, representing 100 hours of work time. These tokens can be exchanged for any service from UI / UX design, prototype to brand design. As the official DAPP Boi website states:

"I recently fell in love with the idea of ​​personal tokens, a cryptocurrency-based token whose value depends on human performance."

Not surprisingly, Matt's talent and creativity made all his BOI Tokens quickly robbed, and the buyers were well-known projects, such as Dharma and Saint Fame . Dharma bought a lot of BOIs to "hire" Matt. Saint Fame is a DAO in the fashion industry. They "call" Matt through BOI and designed their Genesis long-sleeved shirts.

The issue to consider is that for those with high time value, the entire market can be created from the scarcity of tokenized time. However, how does it permeate ordinary people?

Roll is an emerging project that provides a framework and dashboard based on which anyone can quickly and easily create their own social currency.

"There are currently more than 50 different social currencies on the website, all of which are limited to a fixed supply of 10 million. Of these, 68% (6.8MM) will be gradually released within 3 years (2% to the creator every month ); 20% (2MM) is automatically issued to the creators for distribution within the community; Roll holds 12% (1.2MM) shares to promote economic growth and provide initial liquidity for creators.

Translator's Note: Shoutouts is simply a trick for some people who have less followers to ask more people for help.

What makes Roll unique is that they recently integrated the Uniswap front-end , effectively creating a social currency market for those individuals who are popular. It provides an easy mechanism for everyone to get social currency quickly without the hassle of OTC (Over-the-Counter Trading). In addition, the unique Uniswap pool allows tangible assets to be tied to every social currency.

The point is that DEX (Decentralized Exchange) provides an important foundation for creators to share the liquidity of their social currency.

Although Roll is definitely excellent for non-technical users who want to tokenize their time and brand, but for those users who have a lot of upside, give 12% of the total supply to Roll Undoubtedly an exorbitant price.

Pet3r Pan is the co-founder of MetaCartel and MetaCartel Ventures , and he is also one of the most popular and sought after community members of Ethereum . Similar to Roll, Pet3r recently launched $ MAGIC, a token representing his time.

Pet3r created 120 $ MAGIC Tokens, representing his 120 hours. $ MAGIC helps to promote the product through the communication of partners, such as the following example:

Unlike Roll, Pet3r created $ MAGIC in the purest way and launched his exclusive Uniswap pool , which effectively improved the fine-grained supply of $ MAGIC. Here is a wonderful overview of the process: 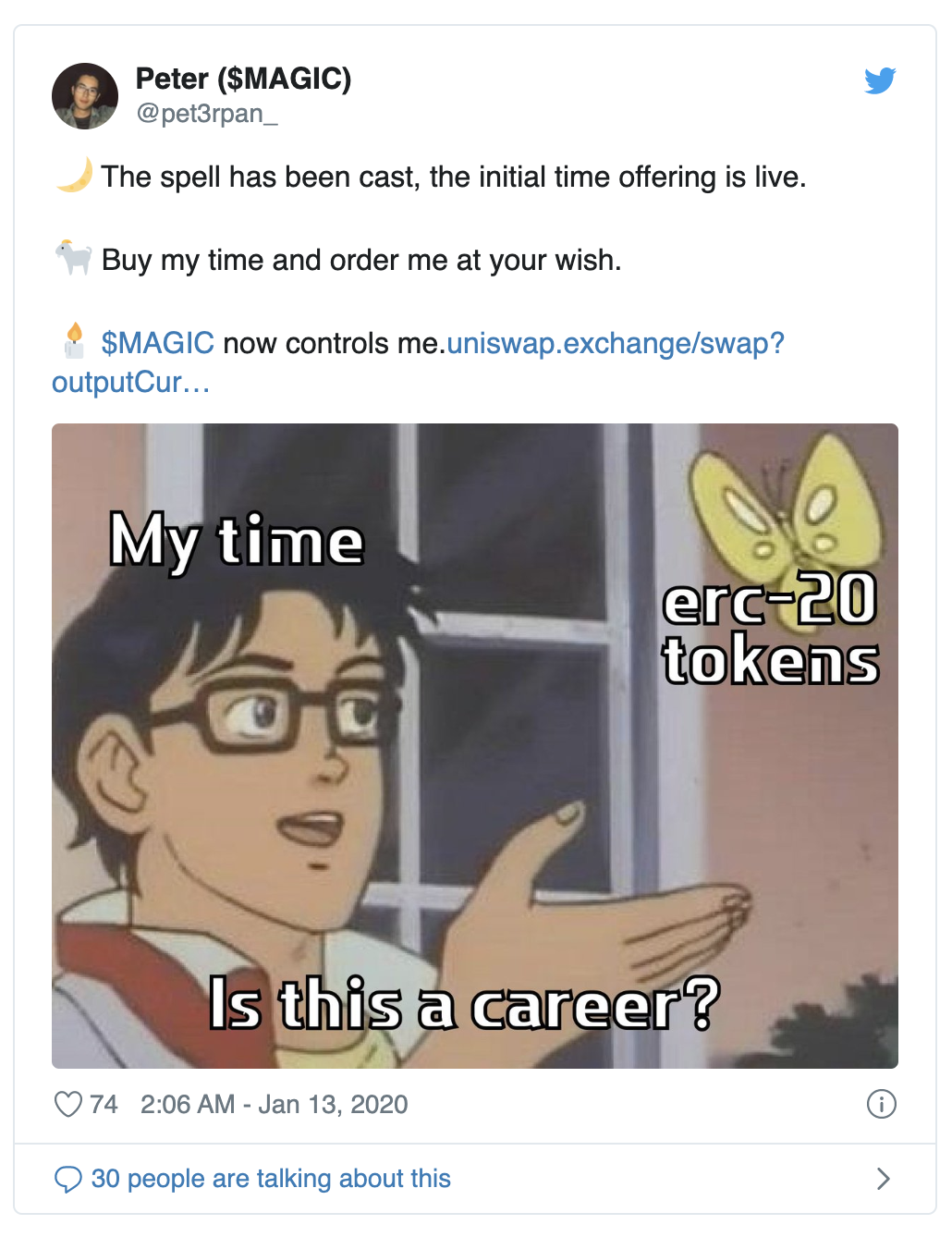 The core meaning of $ MAGIC is that it proves that personal tokens can be created through service platforms such as Roll, or they can be created independently. It sends us an important signal: the prelude to human capital contracts has begun.

Above we have discussed several existing cases, let us look at some wider area scenarios, the following ideas are likely to become reality in the near future.

Similar to Spencer, other professional athletes can also tokenize their future income. This concept may permeate high school and college. After their home heroes (such as Akron's ala Lebron James or Davidson's Steph Curry) become stars, the capital invested by their "early adopters" will appreciate substantially. Under this model, investors are actually betting on the potential of athletes through contracts.

California recently passed a bill that college athletes can now use their reputation to get paid for commercial marketing. Therefore, tokenized HCC can be used as a connector for obtaining value for these athletes during college, helping them to win the opportunity for the lowest income.

Imagine that a serial entrepreneur is seeking financing for his next venture. He may have had some small exit opportunities before, and thus has a beautiful resume and network of contacts. He may not know where his next venture will be, but his colleagues and past investors know that no matter what he does, it is valuable.

Venture capital is to a large extent the founder of the investment. The founder can seek investment capital in the form of an income sharing agreement, under which the investor will receive x% of his or her income within a fixed period of time. In the form of tokenization, the “equity” in ISA can be directly traded between the primary market or the secondary market. In these markets, the value is based on the expectations of future cash flows.

Translator's Note: The advantage of tokenization is that high liquidity can be achieved at the moment of equity transfer, while traditional equity has very low liquidity before the IPO.

Growing artists always need funds to cover their marketing and operating costs. Investors can provide them with funds to increase their brand influence, and the return is a certain percentage of their future income or royalties on product sales (such as songs , Artwork, novel).

In the music industry, record companies usually implement "all-in" cuts, which means that their income is deducted from the artist's total income. In such a scenario, we can imagine a tokenized $ SKRILLEX. Then, every time SKRILLEX's performance, investors can earn a reward from it.

In addition, similar to Dinwiddie's approach of bringing his investors to All-Star Weekend, artists can also allow Token holders to watch their performances as VIPs, or prioritize their unpublished works.

Take a step back

The individual cases we have discussed so far have been (hopefully) recognized by us as valuable. However, HCC's core value proposition is heavily driven by:

It is undeniable that many factors in the characteristics of Token will largely lead to its classification as a security, which means that these products must follow strict guidelines before going live. The current obstruction of the Spence contract by the NBA is a proof that innovation may falter because of fear of change and lack of education.

In order for these projects to really get started, there needs to be a way for people from all over the world to get involved, and then just spend a small dollar on their favorite athlete or influencer.

Until then, we will continue to explore the innovation boundaries of web3.

The data shows that Ethereum has a certain rise in the bitcoin exchange rate, and the volume of 24H trading on the mainstream exchange has skyrocketed.