Viewpoint | Is the BNB that Binance destroys every quarter really tied to profits?

On January 18, Binance officially announced the completion of BNB destruction in the fourth quarter of 2019. According to the Binance announcement, nearly 2.2 million BNBs (2216888 BNB) were destroyed this time, valued at approximately $ 38.8 million. 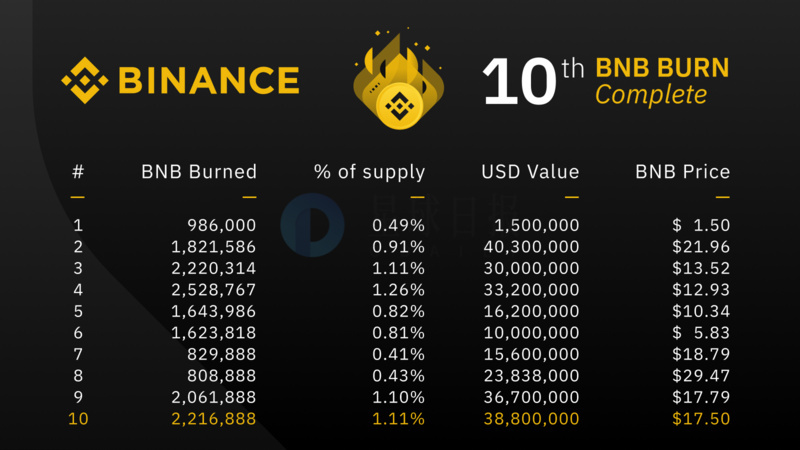 Given that Binance previously mentioned in the BNB white paper that the value of destroying BNB each quarter is 20% of the quarter's net profit, the data of "$ 38.8 million" has been interpreted by many market analysts as-Binance in 2019 In the fourth quarter of this year, it achieved a net profit of $ 194 million. But is this really the case?

The Block Research Director Larry Cermak tweeted today: "Few people know one thing-Binance revised its white paper last summer and the destruction of BNB is no longer based on quarterly net profit. All market analysis (Such as Arca, Messari) are inaccurate, but Zhao Changpeng is happy to forward these analyses. In fact, BNB's current quarterly destruction is based on Binance's transaction volume data. "

Larry claimed that Zhao Changpeng told him at the time: "We have deleted the description of profit because some regions tend to associate profit with securities, and we want to separate BNB from securities. So next we plan to use this New ways to describe how BNB is destroyed. "

According to Zhao Changpeng's explanation, Binance modified BNB's destruction method due to regulatory considerations. However, the new method of destruction does not seem to be transparent enough. In Larry's original words, "They can burn whatever they want".

Larry pointed out that in Q4 2019, the value of BNB destroyed by Binance was the second highest since Q4 2017. This number is interesting, however, as the volume of BNB destruction data increased while the volume of transactions in the quarter actually decreased. For example, for comparison, in Q2 2019, Binance destroyed a total of US $ 23.84 million worth of BNB, while the transaction volume in the same quarter was US $ 151.7 billion. In Q4 2019, Binance's trading volume decreased by 47%, but the value of BNB destroyed increased by more than 60%. The figure below calculates the ratio of Binance's destruction value to spot trading volume in each quarter of Binance, and the changes are obvious. 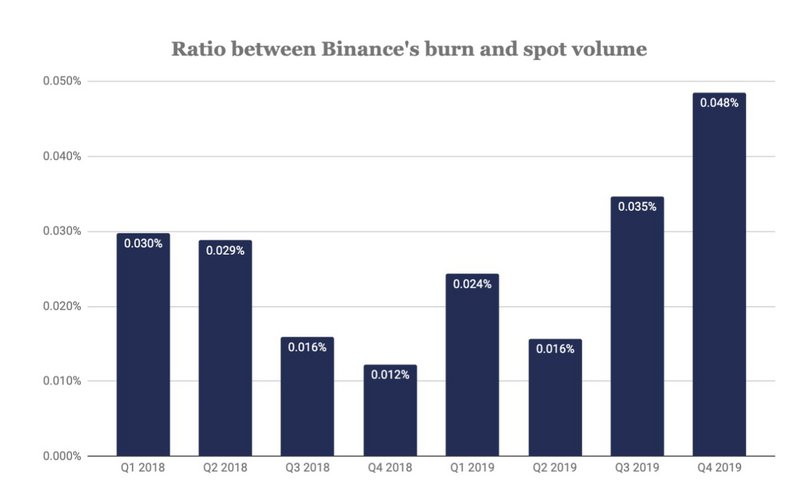 Some argue that the changes in the data can be attributed to the futures trading market that Binance has launched since. Larry Cermak explained that this theory is also not true.

Larry concluded: "My theory is that Binance simply chose to destroy more BNB on its own. The more they destroy, the more headlines will be made, and the more people will think that Binance's performance in the fourth quarter is real Good. But if you look at all the data, you will find it impossible. "

"All exchanges struggled in the fourth quarter, and Binance is no exception. No matter how much BNB they destroy. Binance is a very successful company, but it is not as successful as people think."

Wuzhen scene Meng Mengyan: Libra has become a confrontation between the new civilization and the old civilization, there is no way to block

The data shows that Bitcoin has returned to below 8000 and came to the low point before the pull on October 1.

In the face of the epidemic, how can blockchain improve the ability to govern according to law?

The data shows that 67% of the cryptocurrency fell more than 90% from the historical highest price.