Editor's note: This article has been deleted from the original intention of the author.

For the blockchain industry, 2019 is undoubtedly an ups and downs. From the trough of development to the national strategy, the blockchain has finally been "rectified."

Recently, Interchain Pulse organized a multi-year survey activity, inviting more than 20 well-known domestic and foreign big coffees to conduct research and judgment on the development status and future trends of the blockchain for the reference of colleagues in the industry.

The development of the industry in 2019 is in line with expectations, and the outside world's favorability for blockchain has increased significantly

Despite the bear market and trough period, most people in the industry still believe that the development of the blockchain industry in 2019 is in line with expectations, and some even think that it exceeds expectations. 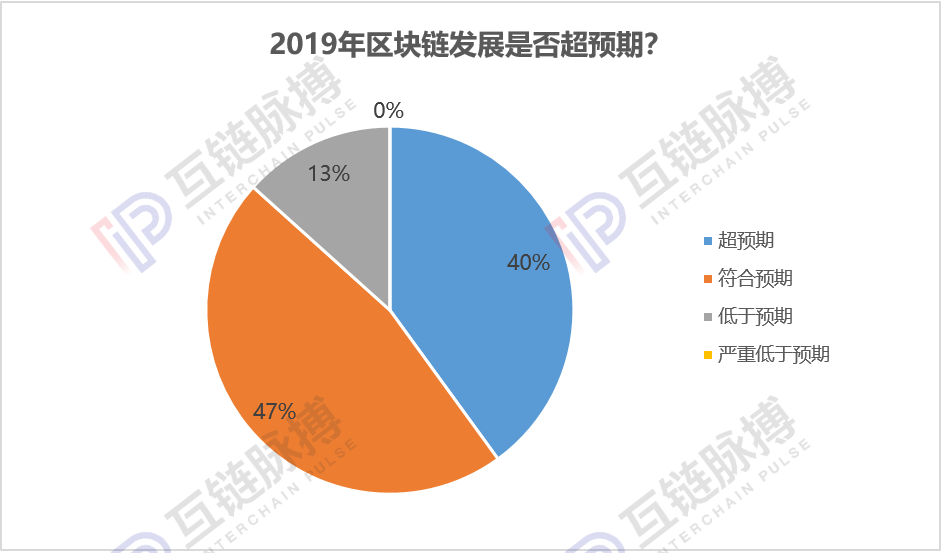 In fact, in the first three quarters of 2019, the blockchain has been in a downturn. It was not until the "1024 speech" that the entire industry was rectified, which restored the confidence and future expectations of the blockchain. 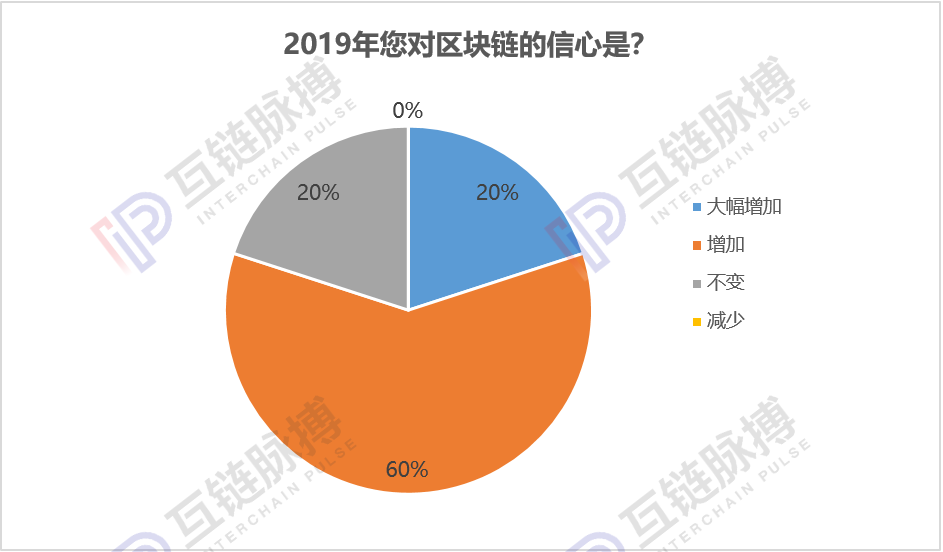 Another major benefit brought by the "1024 speech" is that people in the non-blockchain field have greatly increased their favorability and recognition of the blockchain.

The inter-chain pulse survey shows that almost all people surveyed believe that their friends who are not in the blockchain industry have begun to agree with the blockchain.

In fact, entering 2019, the performance of domestic mainstream blockchain underlying technology platforms has improved to meet some application needs. Some blockchain companies have begun to focus their technological breakthroughs on privacy technologies, multi-chain and cross-chain, etc. Field and made some progress. 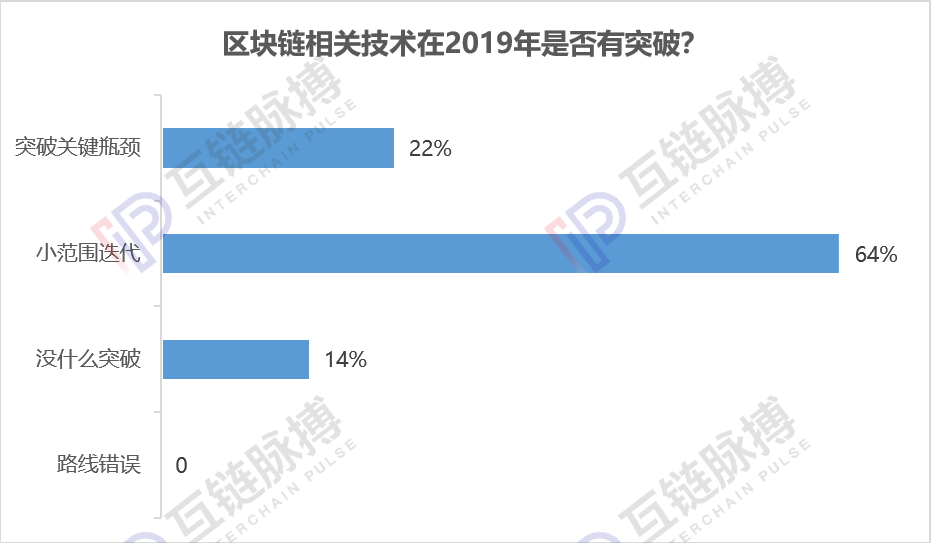 For example, the traceability privacy protection technology launched by Thunderchain in 2019, which can protect user data privacy while supporting traceability through encryption technologies such as ring signatures and zero-knowledge proof, is a major breakthrough in the field of blockchain security technology.

In addition, the star projects Cosmos and Polkadot in 2019 set off an unlimited reverie of cross-chain technology in the industry, but the specifications of CosmosIBC are still under development. Polkadot is also in the Kusama testnet stage. How can the technological breakthroughs between the two still be seen after the launch this year Divide. 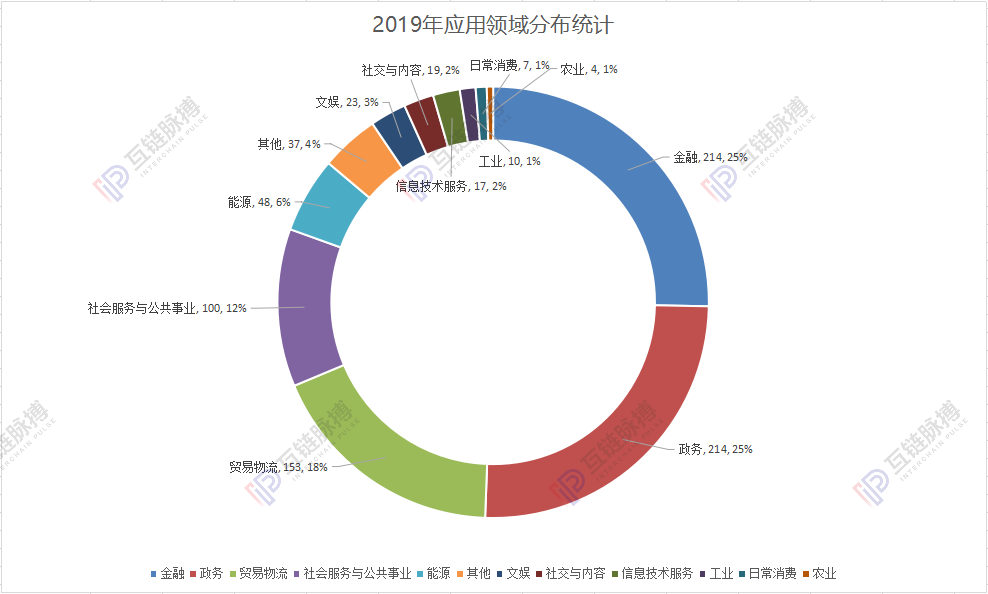 According to the statistics from the Interchain Pulse Institute (IPRI), in 2019, China has become the country with the largest number of blockchain applications in the world, with up to 400 projects disclosed throughout the year, with application areas covering government affairs, finance, supply chain management, 13 major fields including trade logistics, social services and public utilities, social and content. 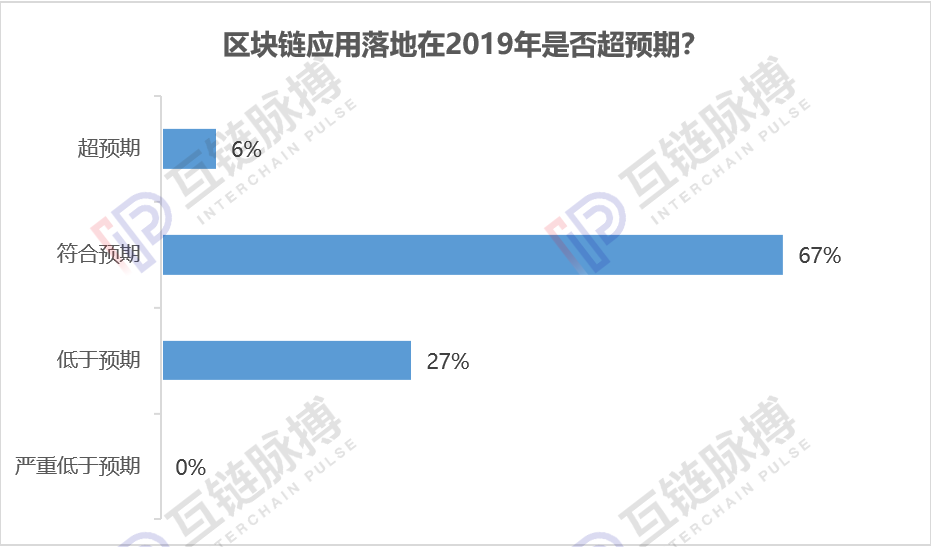 The accelerated pace of application landing has also opened a favorable situation for China in the global blockchain competition. The Interchain Pulse survey shows that 73% of people believe that China has become one of the leaders in global blockchain development in 2019. The policy environment will be more friendly in 2020, and the application will be a landmark event

Looking forward to 2020, the industry is still full of confidence in the development of the blockchain industry, but it is also gradually returning to rationality. 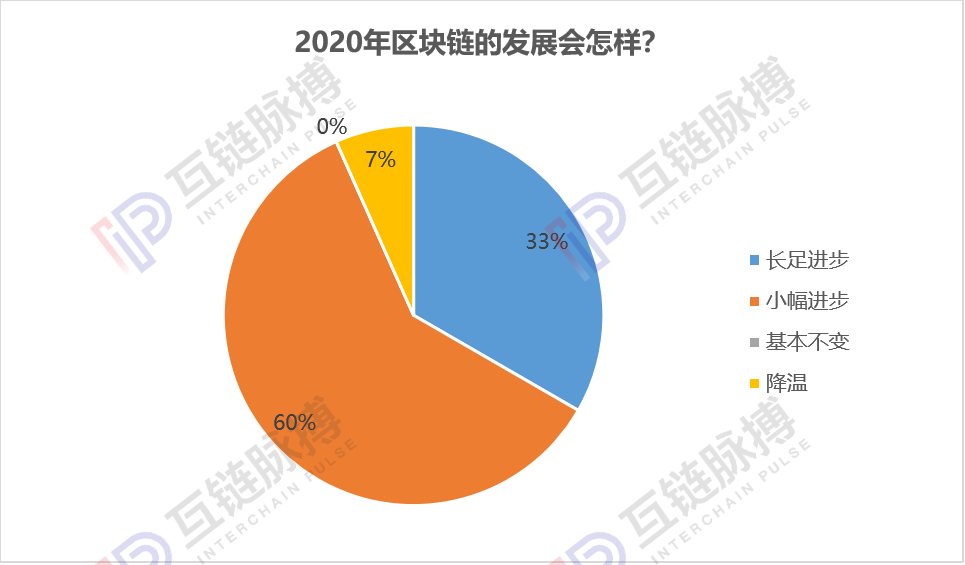 A considerable part of the industry's confidence comes from the overweight policy from the central government to local governments. 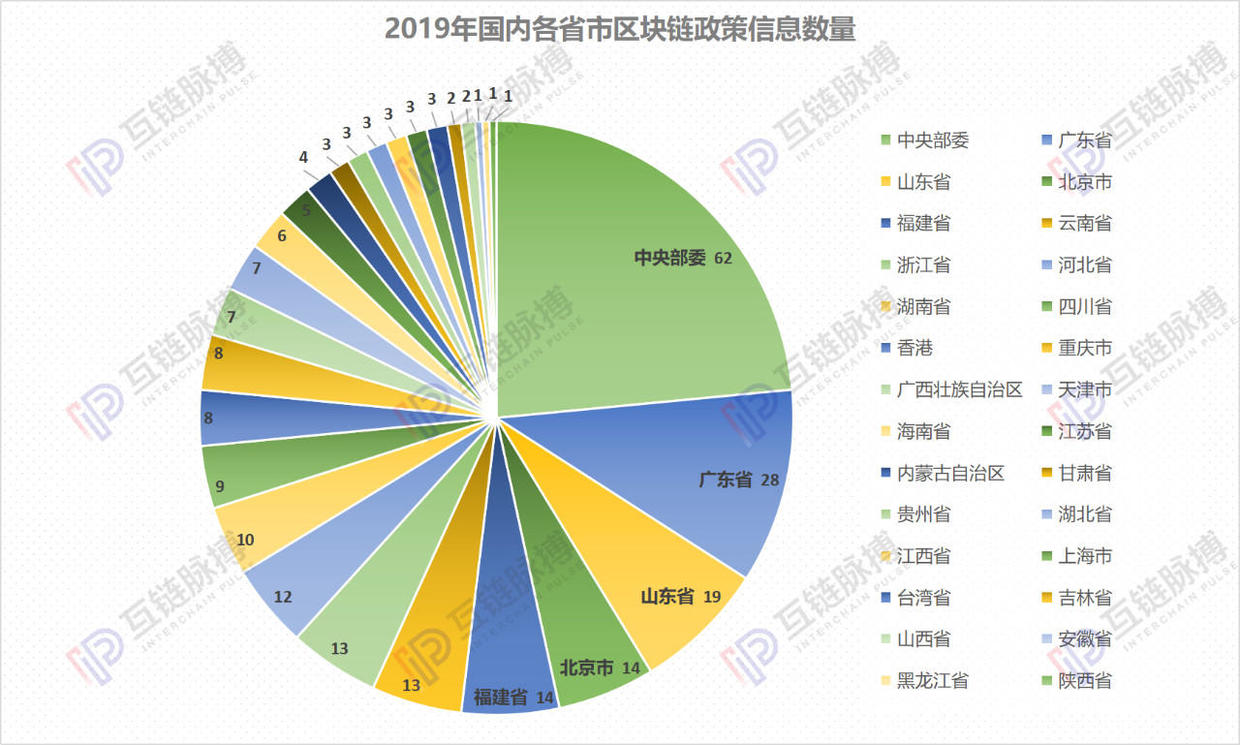 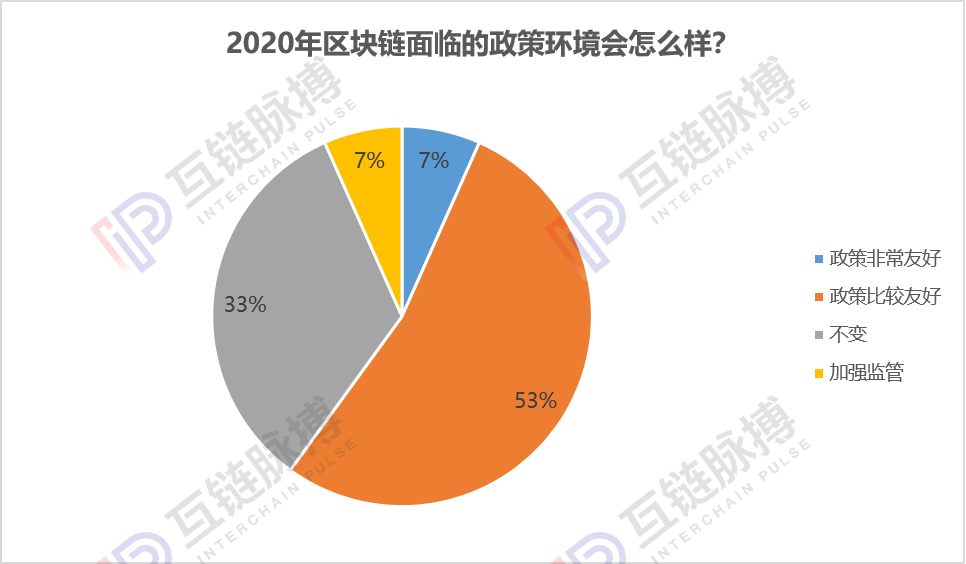 In terms of technological development, the industry believes that the blockchain is expected to usher in a new breakthrough in 2020.

Huobi China CEO Yuan Yuming predicts that in 2020, in addition to continuing to increase concurrent capacity, blockchain technology may continue to make efforts in privacy technology, cross-chain technology, and distributed storage. And Yu Xian, founder of Slow Fog Technology, believes that the performance improvement of secure multi-party computing (MPC), Layer 2 technology, and private transactions will be a hot technology issue worthy of attention in 2020. 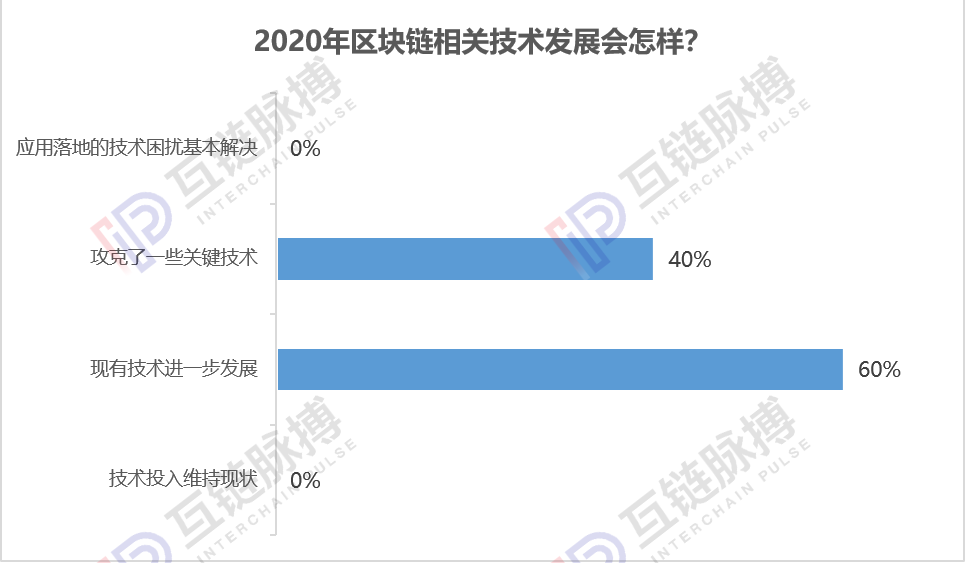 In terms of landing applications, the industry generally believes that 2020 will become a key year for the centralized landing of blockchain applications.

The results of the Interchain Pulse survey show that 87% of people believe that the landmark event of application landing will occur in the 2020 blockchain industry.

A member of the central bank's blockchain financial expert group and the co-chairman of the Zhongguancun Blockchain Security Research Institute stated to Interchain Pulse that in 2020, the blockchain related to trade and financial scenarios is the best opportunity, and this year is also the central bank's digital currency. The year the game really started. Zhou Sha, the founder of Jingtong Technology, a representative of the business community participating in the survey, said, "With the warm-up of local governments this year, support for government-related fields will be heated for a while. This is good for the practitioners of the blockchain industry. It is because The government's support came out, and many of the teams that couldn't support it had rice. The disadvantage is that this will create some companies that rely on the government, rely on opening up government relations, and rely on the banner of academicians to make tiger skin mixed rice. And let the real science and technology companies lose their aggressiveness in the market. Once these two years have passed, the government ’s support has diminished. It is estimated that some companies will still not be able to run out of their own profit model, or they will face no profit before the "1024 speech" The dilemma of the model. "

Suggestions and messages from some industry participants who participated in the multi-year survey:

Fan Ruibin, Blockchain Leader of Weizhong Bank: Looking forward to 20 years, the blockchain industry will be more rational, pragmatic and healthy, and it can better integrate with the real economy and social governance and promote its development. As an important promoter of the industrial blockchain, the mutual chain pulse, I wish the 20-year grand exhibition to create greater glories.

Zhu Youping, deputy director of China Economic Network Management Center of the State Information Center: I hope there will be a breakthrough in regulatory policies! I wish the pulse of the mutual chain gets better and better!

Jinjiang Cloud Blockchain General Manager Zhu Jiang: I hope the industry can be patient and continue to invest!

The chief scientist of the State Grid Zhejiang Electric Academy Blockchain: 2020 will be a year of large-scale landing of the blockchain, but with the implementation of the blockchain, there will still be many problems. It is a traditional centralized system. No technical, governance, operation and maintenance issues have been encountered. In short, the opportunities of the blockchain are far greater than the challenges!

Fan Xiubin, a researcher at the Institute of Software of the Chinese Academy of Sciences and a researcher at the State Key Laboratory of Cryptography and Technology: From our perspective, blockchain should go to the bottom. Now the number of people participating in blockchain conferences is decreasing, and investment is also decreasing. The chain industry has entered a process of rational return. The situation from last year to the present is that the entire industry has gradually recognized various investment bubbles, including digital currency investments. But the return means that the blockchain will really be put to good use. What can a blockchain do? It's not for speculation, it's really about technology, so there is an elimination process. After rational return, it will return to the position of the blockchain itself.

Li Lihui: There are four advantages to fiat digital currencies

Runhe Software: integrates emerging technologies such as blockchain to build infrastructure and platforms for financial institutions and SMEs