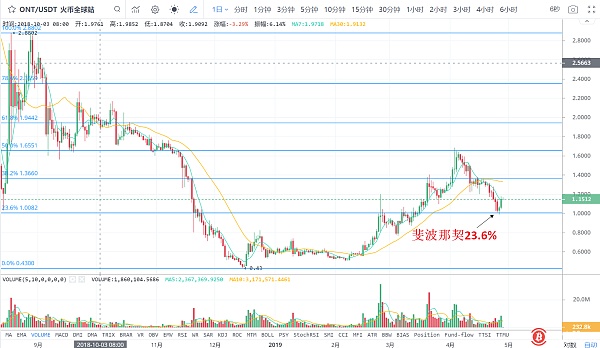 In the ONT daily K-line chart, the price rebounded again around Fibonacci 23.6%, and the rebound strength was as high as 19%. In the context of the general adjustment of digital currency, such rebound strength is hard to see.

In addition to the positive stability of the issuance of the currency in the ONT, the official body has also released ONT this year will not have any unlocking statement. In other words, the selling pressure of ONT will not increase this year, and the favorable ONT trading opportunities are still optimistic.

From the point of view of the callback strength, after the ONT falls back to the integer price of US$1, it must be recognized by investors. Next, the ONT starts with a support price of $1, recovers Fibonacci 50% of $1.6 and challenges Fibonacci's 61.8% split line to match the $1.94 opportunity.

BTC: Using Bitcoin as a reserve

On April 26, the news said that a number of domestic industry-based industry organizations are jointly forming an alliance – "Crypto Reserve", with bitcoin (BTC) as a reserve fund to issue new stable coins. The alliance is expected to sign the first memorandum in the near future, with an initial reserve set at more than 25,000 BTC, with a number of head wallets, mining pools, exchanges and investment institutions indicating their willingness to participate.

When the USDT stable currency is not stable enough, BTC can not only be used as a safe-haven item, but also become the main reserve currency for the launch of stable currency, and its market performance is worthy of attention. 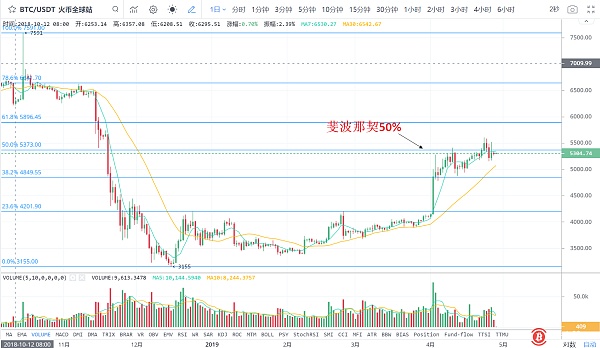 Although the BTC daily K-line chart also showed an adjustment, but the closing price fell less than 4%, the beginning is a relatively small callback. From the performance of the BTC after the USDT thunder, the price reflects a strong hedging attribute. The 1 hour K-line has a 4% rebound in amplitude, which is the result of investors buying at a low price.

This BTC pick-up trend is subject to the Fibonacci 50% split line, which is under the $5373 mark of the dividing line, preparing for further price innovation. The optimistic expectation is that BTC will stabilize above $5373, and price increases will be the main trend.

The IMEOS news on April 27 showed that at the EOS Expo, the Equilibrium team introduced its stable currency project EOSDT. EOSDT is an EOS-based stable currency that is pegged to the US dollar and supported by the user's own cryptocurrency. 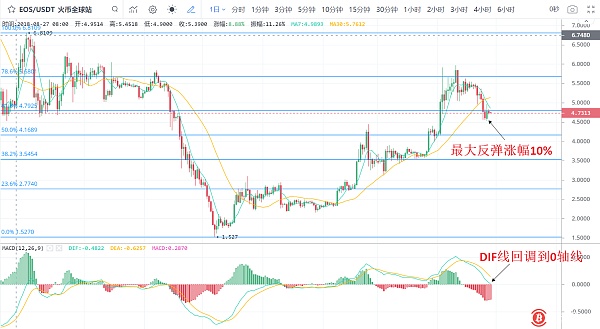 In the E-day K-line chart, the DIF line of the MACD indicator touched the 0-axis for the first time, and the EOS price rebounded by 10% on the short-term. From the short-term performance, EOS reflects a certain strength. Even if this is related to the large decline in EOS, if there is no positive stimulus for stable currency, I am afraid there will be no subsequent increase in price.

The EOS retreats to the Fibonacci 61.% split line position in the rebound trend, and if the line is stable, it will be the starting point for the rebound.

It can be seen that the fire currency has its own stable currency solution, and it is expected that there will be a certain rebound during the short-term callback of the HT. 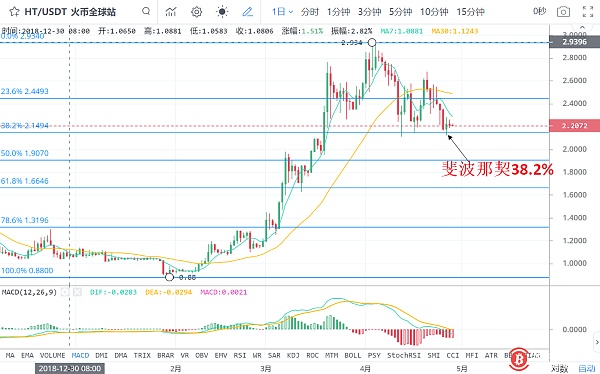 HT has clearly stepped out of its peak performance in the near future. After the price fell back to the 38.2% split line position of Fibonacci, there was a signal to obtain support. Under the cross star, the shadow line continues to hit the bottom of Fibonacci 38.2% of 2.149 US dollars, HT as a stable currency

The concept currency also has the potential for growth.

The performance of the platform coins in the early stage is amazing, and the HT bull market will not end easily if there is a continuous improvement in the expectations of the currency.

Fibonacci's 23.6% split line position, XLM has broken through the split line corresponding to $ 0.1229. It can be seen that the price performance of XLM is still strong. Considering the significant amplification of the volume, we see very high trading signals.

The same is true for the launch of stable coins, XLM closed for two consecutive trading days. Looking at the short-term target gains, you can continue to look up to $0.1229.

It is also stimulated by the positive, and the performance of ETH with the concept of stable currency is also worthy of attention. The launch of the ERM20-based stable currency is expected to be the basis for the rise in ETH prices. Of course, as the second-largest currency in terms of market capitalization, ETH also has a safe-haven property similar to BTC.

The research chain Insight Chain (INB) released investors' findings on Bitfinex's recognition of funds being frozen. Currently, 51.8% of the investors choose the safe haven currency is BTC, and 30.4% of investors choose ETH. It can be seen that many investors are recognized for the safe-haven properties of ETH.