Foreword: One of the most powerful powers of the crypto world is its composability, which comes from permissionlessness. Because the blockchain is open, not controlled by a single company or organization, uninterruptible, and cannot be tampered with, it has completely new characteristics. This makes the smart contract platform a license-free platform on which license-free protocols and applications can be built. These tools all become building blocks to compose new things that are native to crypto. This explosive power of innovation has already begun to appear on DeFi. Blue Fox Notes firmly believes that the "singularity" of the encrypted world will emerge in the future, and the next major event that will change the world will explode in countless combinations.

Have you ever heard of "suitcase words"? Marvin Minks coined the term to mean words with multiple meanings. For example, the words "consciousness" and "morality". (Blue Fox Note: A suitcase is a container that can hold a variety of things, and can hold a lot of things. Some words have multiple meanings, just like a suitcase)

In the crypto world, "decentralization" is definitely a "suitcase word." It contains a lot. Actually, I think it's overcrowded. Let's open one of the many meanings of this decentralized suitcase: no permission required. In particular, let's focus on license-free developer platforms and why they inspire innovation.

Before we dive into the need for permission, let's take a moment to remember why we should focus on decentralization in the first place. At a higher level, decentralization is related to the decentralization of power. This raises the question: why should we care about the dispersion of power. (Blue Fox Note: The term decentralization is currently a convention, but in fact "multicentricity" is a more appropriate expression because it only turns a single entity into multiple entities to provide services. Checks and balances to achieve security)

Second, it is more subtle and less intuitive. Concentrated power, even in the hands of smart and willing people, is less creative than decentralized, bottom-up experiments.

Finally, this is why market-based economies, although seemingly chaotic, thrive, and plan-controlled economies have failed without exception, despite their top-down efficiency advantages. In the long run, it turns out that creativity is better than everything.

This is where you can play without permission. In simple terms, license-free systems are those without a guard. They are neutral, allowing anyone to build on them, no matter how crazy their ideas are. They encourage innovation because they allow creative people to invent what we don't even know we want, and never know that there will be such a requirement.

Now that we have covered where "no licenses" are suitable for "decentralized" suitcases, let's review what a "platform" is in a computing environment.

Building software is a purely creative act that pure humans can experience. The computer is an empty whiteboard. With enough time and energy, it can be programmed to do anything imaginable. Of course, although it is theoretically possible to make anything, the creation of any individual, team or company is limited. Throughout the history of computing, the so-called "platform" has supported innovation, providing a common foundation on which many developers can build. One aspect of these platforms worth noting is that they stack and combine with each other and tend to abstract away the underlying layers.

The X86 CPU architecture is a very low-level computing platform. It provides execution calculation instructions that map directly to silicon to perform these calculations on silicon. On top of x86, operating systems such as Windows, Linux, and macOS are built, along with high-level programming languages ​​such as c and c ++.

On these OS platforms, and using these high-level languages, countless applications have been created. Some of these apps have even become independent platforms. Microsoft Excel is a good example of an application as a platform. Protocols are also implemented on top of these operating systems, and some of them have become platforms. The Internet is a great example of how protocols become platforms.

On top of all this, a browser was built. Utilizing the application architecture of the underlying operating system and the Internet protocols that everyone has supported, it abstracts the two and provides developers with an environment where they can provide content and build new software.

Early web browsers were extremely primitive. The new website is like a toy. It was so limited that Microsoft, the world's most dominant technology company at the time, had ignored it for years, allowing new browser players like Netscape to grow. (Blue Fox Note: Until today, Netscape represents an epoch-making change in technology. We often say "Netscape moments", such as "Netscape moments" in the crypto world, mostly referring to the key turning point towards the mainstream ) 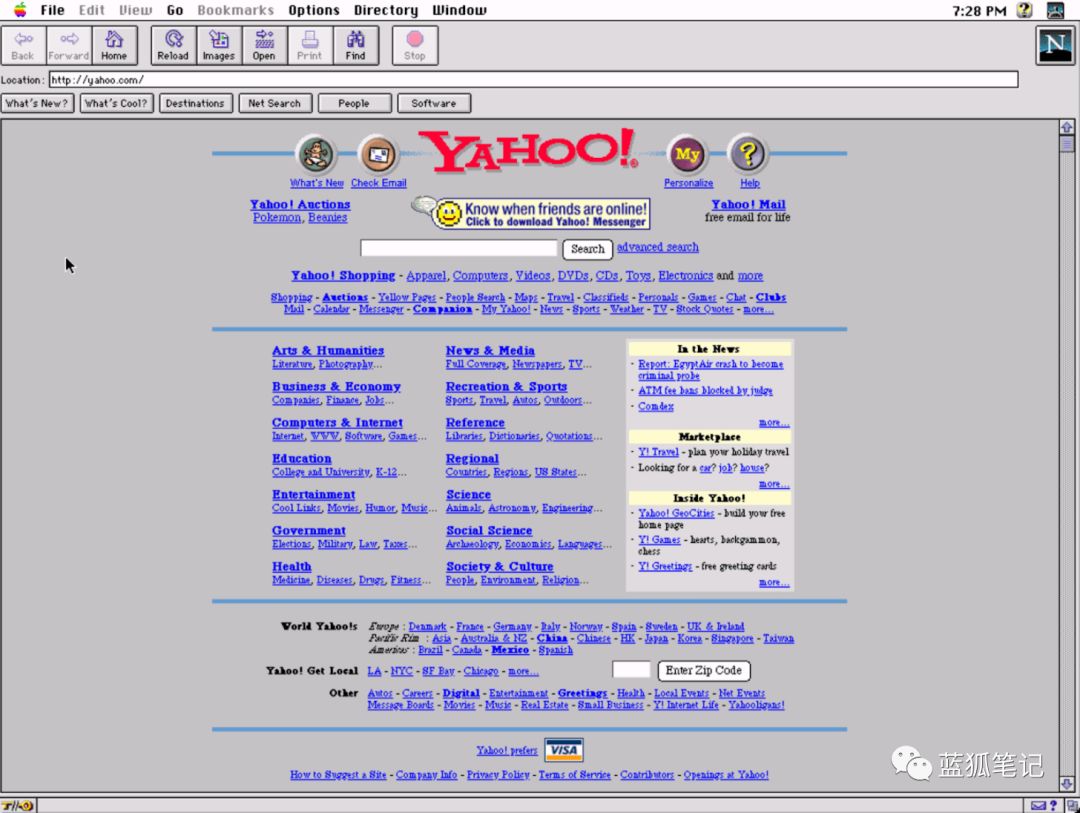 (Above: Netscape browser, circa 1999, from oldweb.today)

Early networks were flooded with seemingly insane experiments. Most have failed, but some of them have been astonishingly successful. The applications we are accustomed to today are sprayed by mainstream critics in the early days. In the Wild West era of the World Wide Web, people built what they were passionate about.

Good ideas surface and evolve. Blogs, chats, social networks, Wikipedia, crowdsourcing scoring systems, online dating sites, and more. If these were all built by "serious" businessmen, these might not exist today.

This brings us into the crypto world, especially the decentralized crypto network that supports robust smart contracts. They are the most powerful license-free computing platform built since the birth of the network. They are still in their infancy, but their impact will be just as important in the long run.

In fact, the scarcity of numbers, unstoppable code, and tamperable data put new decentralized encrypted network primitives in the hands of developers, which will ultimately have more influence than the web network itself. That's why.

"The over-collateralized lending network has dug up exchangeable stablecoins for the fees it pays." Why not? That's MakerDAO and Dai.

"Uninterruptible algorithmic exchange for seamless exchange of any two tokens." Of course! Uniswap.

"A mortgage distributed lending platform, in which you can send, consume, and recover some loans at any time." It sounds refined! This is Compound.

There are many more lists. Each app has its own unique appeal, but that's why it's really powerful: they are themselves license-free platforms. Every application allows developers to build more new things based on it.

No permission required by default

Earlier, we discussed how developer platforms stack, compose, and abstract each other. In terms of architecture, operating system, programming language, and communication protocol, we do. This peaked when the web was born, and the same is true on the web, especially the API (Blue Fox Notes: Application Programming Interface).

By opening public APIs, such as Facebook, Stripe, Google Maps and other web platforms, developers can mix functions to build new things. But in fact, traditional web APIs require permission. They are controlled by the company that created them, and as a third-party developer, you need to master their profitability.

Many great ideas have been squeezed by these tech giants with the most powerful platforms. There is even a term: the so-called "platform risk". In contrast, smart contract-based applications are virtually license-free. Each smart contract application exposes an on-chain API, and any other smart contract or front-end can use the API.

Want to build a dApp that cleverly leverages Uniswap's token exchange capabilities? go a head. Not only do you not need permission, the creators of Uniswap cannot stop you. In turn, what you build on Uniswap will become a tool for the next developer's toolset. This is the platform that does not stop all the way.

Sometime in the next few years, some children will manipulate these smart contracts in the dormitory or parent's basement, and these things will eventually change the world. Thoughts that initially look like toys, most would find them useless. In hindsight, we would all pretend this was obvious.

What makes it all possible? The license-free nature of decentralized encrypted networks, while building on the composite effects of these countless license-free agreements. Decentralized suitcases carry many concepts. License-free and creative experiments that it supports are often overlooked. This is probably the most important attribute in the ecosystem.