As of November 2019, there are 18 government-led blockchain industrial parks, of which Hangzhou is the region with the most capital support.

According to incomplete statistics of the Zero One Think Tank, as of the end of November 2019, there were 18 blockchain industry parks or blockchain industry agglomeration carriers under development or construction led or guided by governments or social organizations with a government background;

The establishment time of the 18 blockchain industrial parks developed and constructed by the government is concentrated in 2017 and 2018;

The Hainan Free Trade Zone (Hong Kong) Blockchain Pilot Zone is a blockchain industrial park that attracts the most companies. At present, more than 100 blockchain companies have settled in;

According to the public information, Hangzhou is the region with the most capital support in the government-led blockchain industry park. It is worth mentioning that Wanxiang Group will invest 200 billion yuan in the next 7 to 10 years to build a "Wanxiang Innovation Energy Concentration City" within the 8.42 square kilometers of Xiaoshan District, Hangzhou, to promote the application of blockchain technology.

Enterprises settled in the industrial park can not only share infrastructure and enjoy the innovative institutional arrangements in the park, but also reduce logistics costs or transaction costs due to the geographical proximity of supporting enterprises or cooperative enterprises.

I. Scope of discussion of necessary concepts and reports 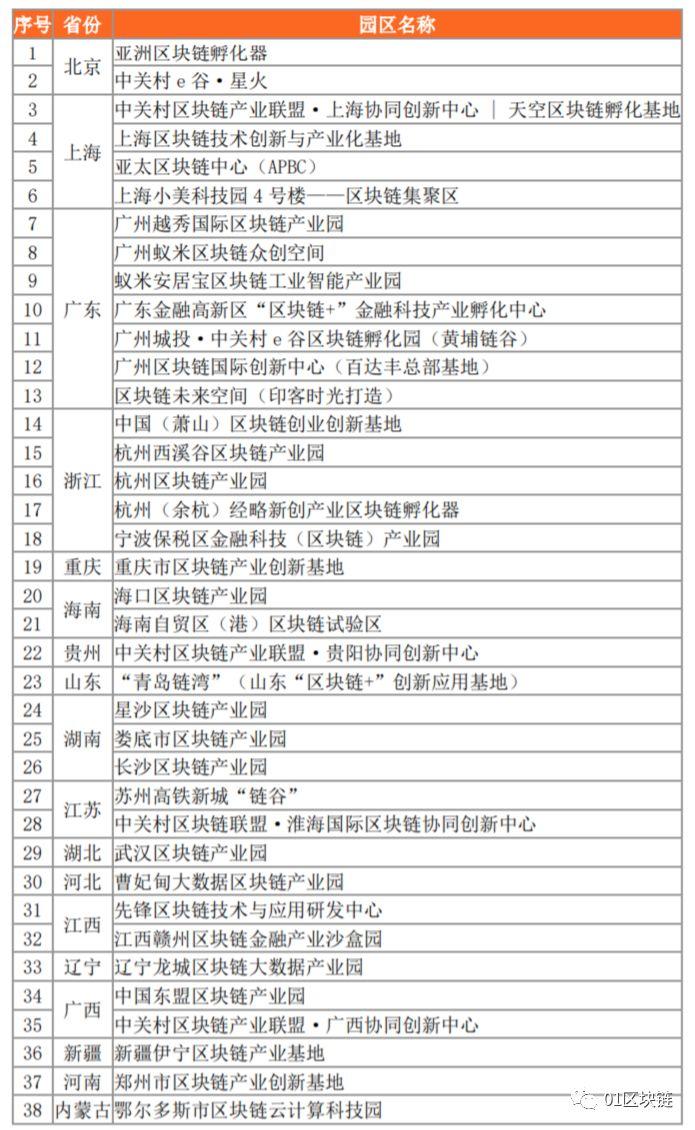 1. What is the blockchain industrial park

An industrial park is a special location environment created with the goal of promoting the development of an industry. It is an important form of spatial aggregation for regional economic development and industrial adjustment and upgrading. It is responsible for gathering a series of innovative resources, cultivating emerging industries, and promoting urbanization. Important mission. Industrial parks are generally developed after a large area of ​​land is subdivided for use by some enterprises at the same time, in order to facilitate their geographical proximity and shared infrastructure.

The industrial agglomeration carrier of the nature of the incubator mentioned earlier is also a new type of social and economic organization, which is mainly targeted at startups. By providing R & D, production and operation venues, shared infrastructure and support in consulting, policy, law, marketing, etc., in order to reduce the startup risks and costs of startups and increase the survival rate of startups.

2. Scope of discussion in this report 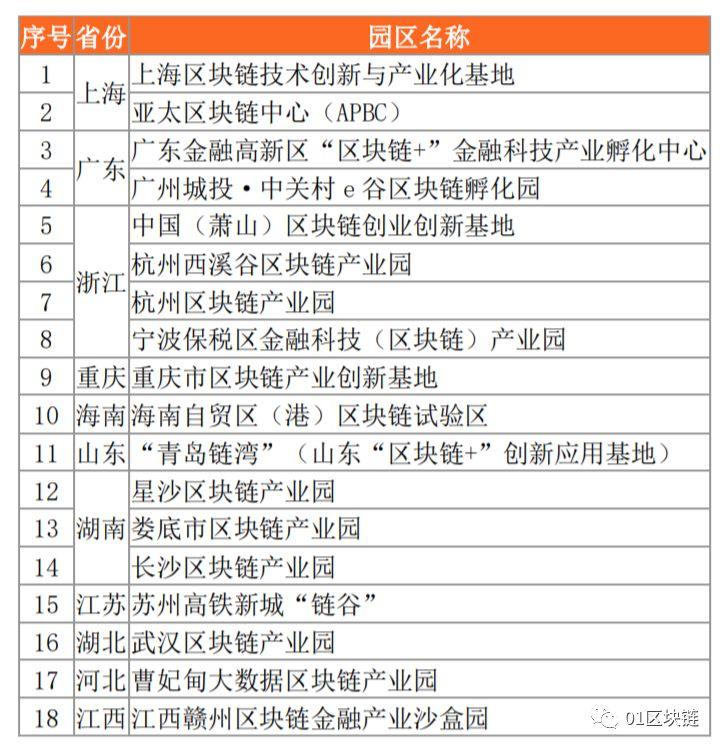 According to the incomplete statistics of the Zero One Think Tank, as of the end of November 2019, there were 18 blockchain industry parks or blockchain industry agglomeration carriers under development or construction led or guided by governments or social organizations with government backgrounds.

2. Why can the blockchain industrial park develop rapidly?

In 2016, the State Council released the "Thirteenth Five-Year Plan" National Informationization Plan. For the first time, blockchain was included in the category of new technologies and made a cutting-edge layout. Since then, from the central to the local levels, various types of blockchain industry supervision or support policies have been introduced, creating a good policy environment for the development of blockchain technology and industry.

Take several first-tier cities where blockchain technology is relatively active as an example. Since 2016, these cities have successively introduced a series of policies to support the development of various high-tech including blockchain.

For example, at the end of 2016, the Beijing Municipal Bureau of Financial Affairs and the Beijing Municipal Development and Reform Commission jointly issued a notice of the "Beijing's" 13th Five-Year Plan "Financial Industry Development Plan": to accelerate the development of financial technologies such as cloud computing, big data and blockchain Innovative development and application in payment clearing, digital currency, wealth management and other fields. Encourage the development of Internet financial security technologies such as blockchain technology and trusted time stamp identification, protect consumer rights and improve the security of Internet finance.

At the end of 2017, the "Measures for Promoting the Development of the Blockchain Industry in the Guangzhou Development Zone of Huangpu District, Guangzhou City" was officially released, with a total of 10 articles, covering the blockchain from the scope of application, cultivation, growth, platform, application, technology, finance, and activities. Enterprises or institutions support key policies. This policy is also known as the "Ten Blockchain" policies of Guangzhou.

Also at the end of 2017, the Hangzhou Municipal People's Government issued the "Guiding Opinions on Accelerating the Development of Hangzhou's Lai Lai Industry", which mentioned the blockchain technology in a large length, emphasizing the significance of the blockchain for future competition. Chain and other fields are the first to explore the layout and build the first-mover advantage.

According to incomplete statistics, as of November 2019, a total of 12 provinces and municipalities including Guangdong, Zhejiang, Jiangsu, Shanghai, Fujian, Guizhou, Shandong, Jiangxi, and other municipalities across the country have issued guidance on blockchains. Shanghai, Hangzhou, Suzhou, Guangzhou, In order to attract more blockchain companies to settle in local industrial parks, cities such as Changsha, Chongqing, and Chengdu have even issued corresponding measures for the establishment of blockchain startups, business operations, high-level professionals, housing subsidies, and living subsidies. Supportive policies.

After the Central Political Bureau's collective study of blockchain technology on October 24, 2019, blockchain as an important breakthrough in core technology and independent innovation ushered in new opportunities for development in China.

2. The active development of the blockchain industry

After 2017, China's blockchain companies have begun to appear intensively, and more and more Internet giants have also begun to quickly lay out their blockchain business. Many large enterprises including Alibaba, Tencent, Huawei, and Baidu have long been Many explorations in the field of blockchain have begun, and certain results have been achieved. To a certain extent, the concept of blockchain has gradually increased awareness and acceptance throughout the society through the promotion of enterprises.

Of the 18 government-led blockchain industrial parks / industrial aggregators that Zero One Think Tank focuses on, only a few have dedicated official websites or WeChat public accounts, and the overview of a blockchain park often needs to be distributed on the Internet. Several news collectively described that this work is the most time-consuming and labor-intensive, but we still worked hard to sort out the development status of the government-led blockchain industry park and found some areas worthy of attention.

2. There are more government-led parks in Zhejiang and Hunan provinces 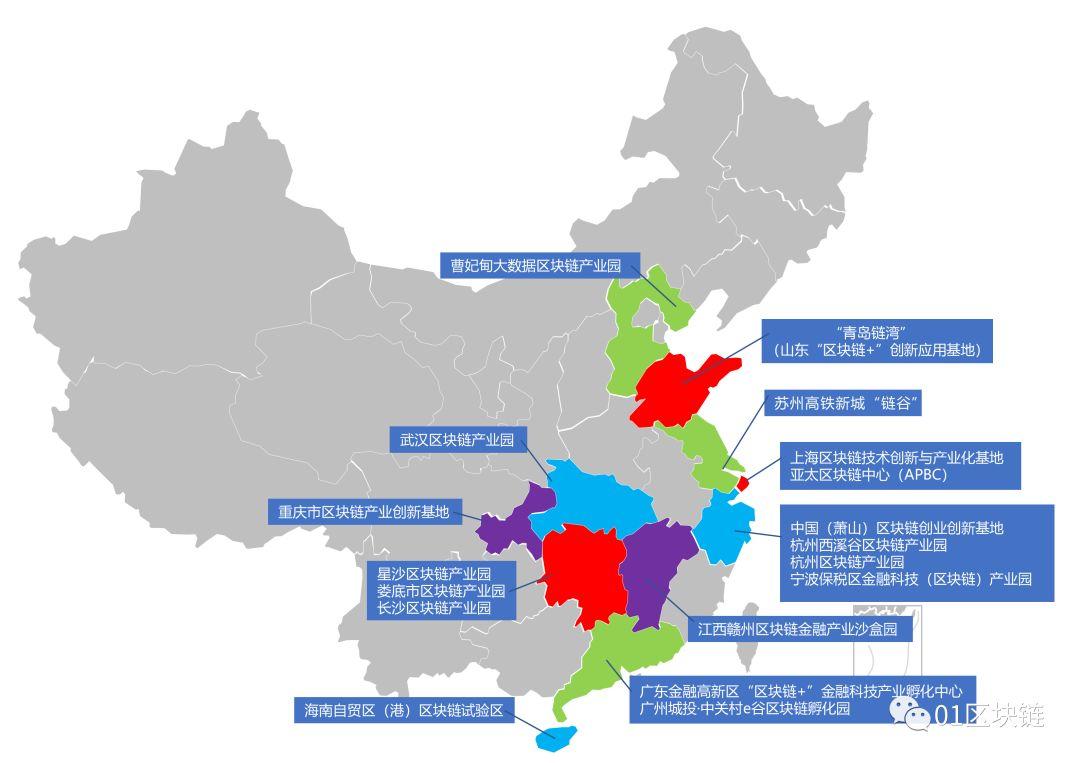 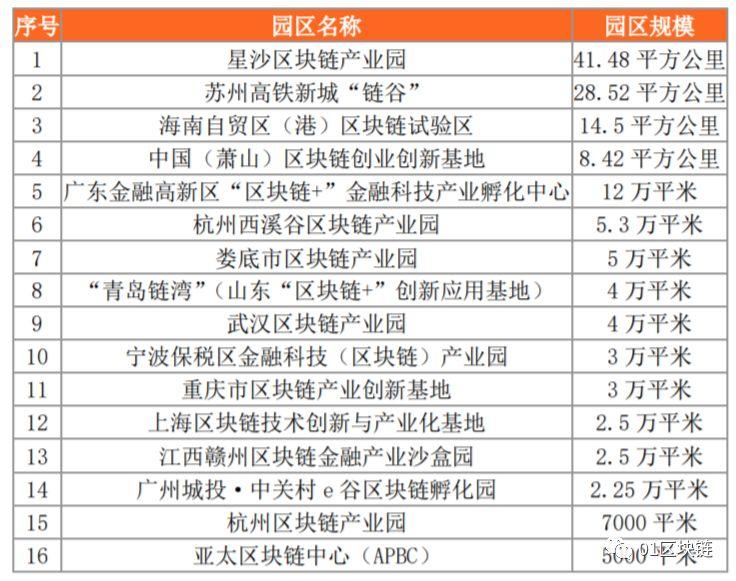 From the perspective of the number of companies that have settled in or contracted, the attractiveness of each government-led blockchain industry park is different. Among the parks that have announced the number of enterprises settled, Loudi City Blockchain Industrial Park has fewer companies settled, but for such a block chain industry that has a short establishment time (established in May 2018) and is located in low-tier cities As far as the park is concerned, it is not easy to attract more than ten companies to settle in, and the companies already settled in the Loudi Blockchain Industrial Park include well-known blockchain industry companies such as QuChain Technology and Defangzhichain.

Among the 18 government-led blockchain industrial parks, the Hainan Free Trade Zone (Hong Kong) Blockchain Pilot Zone is the blockchain industrial park that attracts the most companies. Currently, more than 100 blockchain companies have settled in. The Hainan Free Trade Zone (Hong Kong), which has been built for more than a year, is one of China's important opening doors to the outside world and a bridgehead for opening up to the outside world. 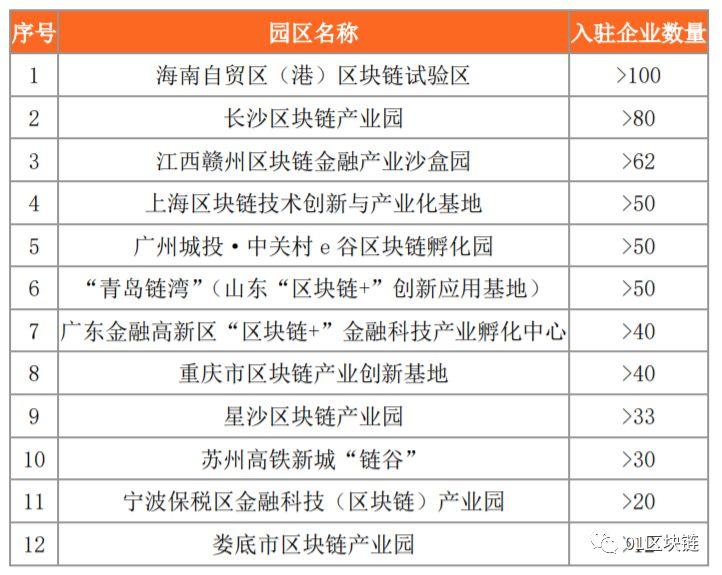 5. Hangzhou has the most capital support for blockchain parks

Wanxiang Group will invest 200 billion yuan in the next 7 to 10 years to build a “Wanxiang Innovation Energy Concentration City” within the 8.42 square kilometers area of ​​Xiaoshan District, Hangzhou. The blockchain application scenarios of Wanxiang Innovation Energy City include: distributed energy systems, a "shared economy" model based on distributed identity systems, tracking and secondary recycling of new energy batteries, smart manufacturing, smart homes, and smart community services . Therefore, it is a big plus for the China (Xiaoshan) Blockchain Venture Innovation Base, which is also in Xiaoshan District, Hangzhou.

In addition, the Hangzhou Blockchain Industrial Park, also located in Hangzhou, released the Xiong'an Global Blockchain Innovation Fund at the launching ceremony of the park. Contribution (raising) was established with a fund size of 10 billion yuan, of which, the government guided the fund to invest 30% to invest in and introduce high-quality blockchain projects.

According to the information that has been published so far, in the government-led blockchain industry park, Hangzhou is the region with the most capital support.