Regarding the earlier proposal by Jiang Zhuoer to levy a 12.5% ​​block reward on miners, Bitcoin.com published an article on Read.cash, stating that it will not support the proposal unless a broader consensus is reached in the BCH ecosystem. . The following is an excerpt from Bitcoin.com:

From the current situation, Bitcoin.com will not support any plans unless more consensus is reached in the ecosystem until the risk of blockchain split is negligible. We believe that the existing proposal does not have sufficient support, and we will work hard to come up with a plan that is good for all interested parties and retains the basic economics of BCH .

This is a great opportunity for developers to figure out the purpose of the funds they need and provide the specific budget and timetable for their work.

We believe that the lack of clarity is one of the main drivers of confusion and controversy across funding proposals.

We reiterate that any funding proposal must be temporary and reversible.

BCH's protocol development is an important temporary phase in preparation for global adoption, so financing proposals must be temporary.

The reason for the development funding discussions is that proper funding will strengthen the BCH ecosystem, but this must not come at the expense of the basic goals of BCH ( global , fast , reliable digital cash ). Bitcoin.com does not risk the division of the blockchain or changes in the underlying economy. To do this, any proposal needs to involve as many economically influential people as possible, including companies, exchanges, miners, and BCH software implementations.

The Block Hub reported on January 23 that BTC.TOP CEO Jiang Zhuoer issued a proposal to collect 12.5% ​​of block rewards from miners for BCH development and ecosystem infrastructure establishment. The funds will be transferred to a Hong Kong company, and Solve non-following miners. The mining pool that was co-signed at the time accounted for 28% of the computing power of BCH, and Bitcoin.com/Roger Ver was also the signatory. The proposal subsequently caused controversy in the crypto communities at home and abroad. Ethereum founder V Shen considered this move to be a mandatory soft fork. Litecoin founder Charlie Lee thought it would induce BTC miners to conduct a 51% attack on BCH and cause more points. Fork, some cryptocurrency coffees believe that this shows that BCH is really centralized. Other disputes include the fact that the Hong Kong company receiving the funds is not a non-profit organization, has no voting procedures, and concerns that BCH development will be controlled by the company owner.

Read.cash's Bitcoin.com statement reads: "Please continue to share your views online. We will read them one by one." It seems to confirm the resistance to the proposal.

At the time of writing, Jiang Zhuoer, the publisher of the miner's tax proposal, and other proposed signatories have not stated their positions through public channels such as official Twitter / Weibo.

Zcash development company ECC official blog announced that, through a poll by the ECCZcash Foundation, the community voted to create a new development fund that will have a 20% mining reward , and miners get 80% of the block at block height 1046400 reward. Assuming that ECC has reached an agreement with the Zcash Foundation, the agreement will be implemented in November 2020 , (point in time) consistent with the first Zcash halved in the plan, at which time the total block reward will be halved.

Zcash was launched in 2016, and the "founder rewards" were distributed within four years: of all Zcash mining rewards, 80% was allocated to miners, about 15% was allocated to investors and founders, and 5% was allocated to ECC for Fund core support functions . The "Founder Award" will expire in November 2020 . Before this community vote, although the Zcash community has reached a clear agreement that no more funds should be allocated to investors and founders, how should sufficient funds for future Zcash support and development be obtained and new third parties be accommodated? , Still pending. The community vote was conducted to solve the above problems, and the voting was completed through Zcash Forum, Twitter, Telegram, etc. 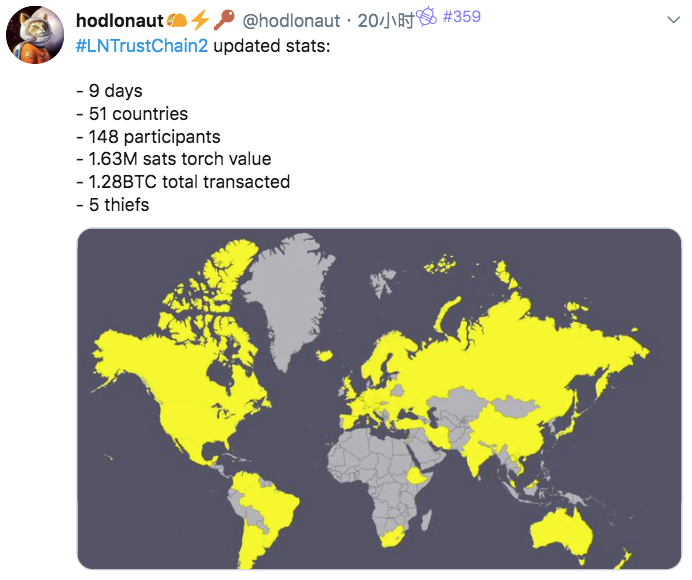 The Lightning Torch was originally launched by Hodlonaut on Twitter in January 2019. The rule is that participants will send some additional amount (10,000 Satoshi) to the next person after receiving Bitcoin, and see how much Satoshi the final amount will be. The purpose of this activity is to test the channel transaction limits and survivability of the Lightning Network, the second-tier micropayment system of Bitcoin. Many big coffees and practitioners participated in the event in 2019, including Twitter CEO Jack Dorsey, Bitcoin evangelist Andreas Antonopoulos, Bitcoin Magazine, Litecoin founder Charlie Lee, Binance CEO Zhao Changpeng, etc. Hodlonaut started the second round of Lightning Torch Relay in January 2021. According to the above statistics, it spread to 51 countries in just 9 days.

4.Glassnode: The number of Bitcoin entities held is 23.1 million, and the proportion of the 7 major exchanges holds 13%

Glassnode states that since the birth of Bitcoin, entities have maintained a net positive growth. In 2019, an average of 11,300 entities join the Bitcoin network every day. This shows that Bitcoin adoption has been very healthy and continuous for many years.

Note: The term entity replaces the title of user or individual, because there are cases where a single address has multiple user funds, such as an exchange.

5.Bitcoin price rose 41% in 41 days, and the year-to-date return rate has reached 26%. The impact of new pneumonia on the price of Bitcoin?

Forbes author Joseph Young tweeted that Bitcoin has risen 41% in the past 41 days:

Bitcoin price has increased by 41% in the past 41 days. impressive.

Usually after a 40% rise, Bitcoin will see a sharp correction. However, the past four days have shown that buyers have responded very strongly to the decline.

Since the beginning of 2020, Bitcoin is the best-performing asset class, with an increase of +26% … The demand for "hedging heaven" is driving the growth of Bitcoin. It can be said that Bitcoin is considered better than gold "Haven". Gold rose 3%, while Bitcoin rose 26%. 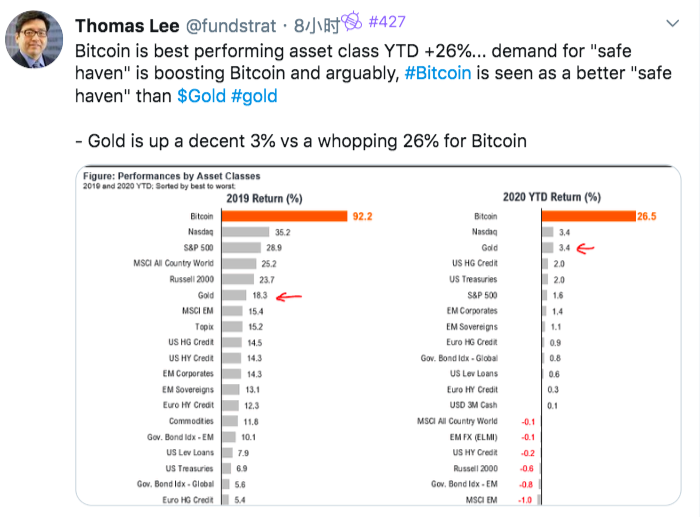 Since the occurrence of a new type of pneumonia in China, the price of bitcoin and other safe-haven assets has fluctuated. Some media believe that pneumonia and the price of bitcoin are related. Economist and trader Alex Kruger analyzed on Twitter whether bitcoin is a risk-on asset ( risk-on situation: investors have a high risk appetite and raise asset prices. For example, stocks ), or whether it is risk-off ( risk-off) Situation: Investors avoid risks and sell assets to reduce asset prices. For example, gold and bonds ) When trading assets, compare the time when Chinese stocks are high and when Bitcoin is low, and divide the time into three periods: the start of the pneumonia panic, and the second wave of panic Third wave of panic. Regarding the correlation between Bitcoin and pneumonia, Alex Kruger pointed out that three panic waves affected risky assets .

-BTC did not respond at the beginning of the pneumonia panic

-BTC sells off during second wave of panic

At the end, Kruger believes that Bitcoin is becoming a macro asset as the market matures.

Ripple vice president of customer service Marcus Treacher and media FinTech shared his predictions for the financial industry in 2020:

1) International payments will become faster and faster and at the same time smaller and smaller. Technologies such as Interledger and distributed ledgers will be compelling and scale-up.

2) More and more banks will use the "banking-as-a-service" technology platform to completely change their service costs and change costs. As the cost of technology related to operations and development continues to rise, it is foreseeable that banks will seek the help of cloud technology providers for banking technology to radically reduce these costs.

3) New consumer purchasing solutions for tourists / travelers who do not need a credit card or credit card payment system will appear in 2020.

6) By 2020, Asian economies will outpace OECD economies in terms of payment innovation. With 80% of digital asset transactions coming from Asia , the region is intrigued by innovation-perhaps the biggest demander for better payment infrastructure.

a. Reuters reports that Saudi Aramco, Saudi Arabia ’s state-owned oil company, has acquired Vakt, a blockchain-based oil trading company, in the form of $ 5 million in new shares. The investment amount will be used to develop the platform and expand the Asian market.

Cardano (ADA) released a new paper on January 27 detailing how smart contracts will be implemented in the upcoming Goguen update. The paper points out that although the EUTXO model of Cardano is well integrated with the distributed characteristics of existing blockchains, it is not practical for smart contracts due to restrictions on programmability. The update result may be similar to the state machine of Ethereum.

c. Forbes reports that Finnish-based Bitcoin peer-to-peer transaction service LocalBitcoins suspended user accounts in some countries in Africa, the Middle East, and Asia without warning, causing some users to be unable to withdraw their Bitcoins. Some have argued that the shutdown is related to the EU's anti-money laundering law (AMLD5).

d. Technology giant IBM has obtained a "self-aware token" patent. The US Patent and Trademark Office describes that the system involves the processing of financial data in electronic money platforms and the processing of e-commerce tokens for offline transactions.

g. The Block reports that the CEO of the Canadian mine Hut 8 has left, Hut 8 reached an agreement with Bitfury to repay $ 4.75 million in debt and reduce the annual fee paid to Bitfury. Other mines, including the Argo blockchain, Bitfarms, Bitmain Has also reorganized its management team or renegotiated the partnership agreement.

h. The Ethereum Foundation awarded a $ 650,000 grant to the Ethereum infrastructure project Nimbus to continue its work on the implementation of the Ethereum 2.0 client.

i. Ethereum-based open protocol 0x has released a new liquidity aggregation tool 0x API, which can provide DeFi developers with the best price for each trading pair. The 0x protocol was launched in 2016, allowing peer-to-peer asset transactions on the Ethereum network. The total deal value of the agreement to date is approximately $ 750 million, and more than 30 projects have been established on it.

j. Government entity-Dubai Multi Commodity Exchange (DMCC) announced at the Davos Forum last week that it has partnered with Swiss-based CV VC to prepare its own "crypto valley" in the United Arab Emirates (UAE) to promote the block Chain and cryptocurrency innovation. 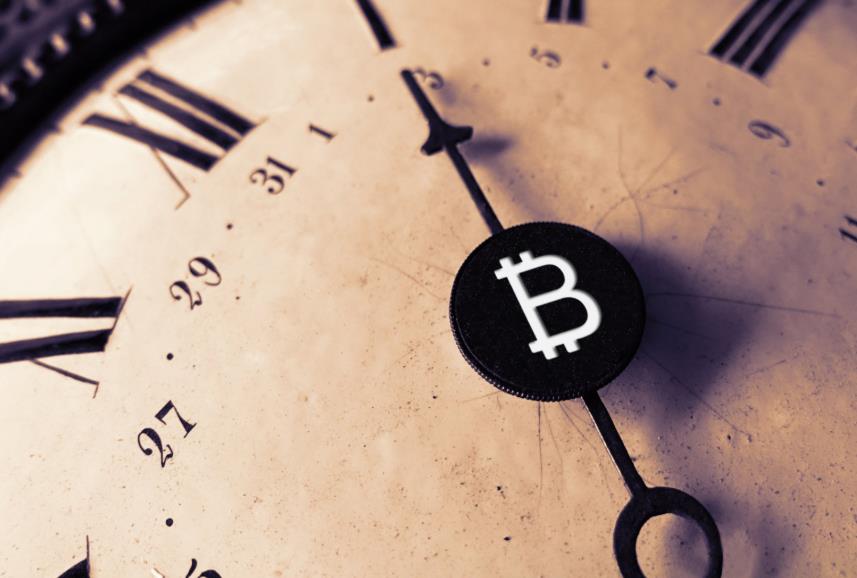