Pantera Capital, a blockchain investment organization headquartered in Silicon Valley, can be regarded as one of the earliest professional investment institutions involved in the cryptocurrency world, and is currently one of the largest professional investment institutions focusing on the blockchain and cryptocurrency fields. The company was founded in 2013 and was the first US institution to invest in Bitcoin at the time. Currently, Pantera Capital manages 7 investment funds, including Bitcoin passively managed funds, digital asset funds, ICO funds, long-term ICO funds, and three venture capital funds.

Pantera Capital just reported its 2019 results to its investors via email, and looked forward to the development trend of the cryptocurrency world in 2020. Pantera Capital stated that in the past year, it has received more than 1,100 project proposals, and finally made 14 new project investments and 2 follow-up investments. The company's overall asset management scale increased by 23% during 2019, and venture capital funds also realized the exit of 6 projects in 2019.

It is worth noting that Pantera Capital pointed out that the blockchain industry has been in the development stage in the past few years, but as more and more companies and projects begin to enter the stage of deploying blockchain technology, in 2020 we will see many Interesting use case.

Let ’s take a look at some of the notable areas this year in the eyes of Pantera Capital:

Scalability has paid off

In fact, blockchain scalability has made a certain leap in 2019, especially in recent months. We are excited to see some solutions already on the market, which will make applications faster, cheaper, and easier to use. It is expected that by 2020, the throughput of the blockchain will increase significantly.

For example, Ethereum, recently bloXroute will be put into use on the Ethereum blockchain, which is expected to effectively improve network throughput. In fact, Ethereum throughput has increased by about 25%, and with bloXroute, there will be further improvements.

Another project worthy of attention is Matic Network. This project uses an improved version of Plasma with a delegated PoS sidechain, which will also achieve Ethereum expansion. This solution can not only take advantage of the centralized system to improve the scalability and throughput of the blockchain network, but also support Ethereum's native decentralized low-trust rollback function.

Another new technology is Optimistic Rollup, a solution designed to enable Ethereum-based scalable smart contract transactions and to ensure that Plasma's data availability issues are not raised, and Arbitrum is working to achieve this.

DeFi many use cases are constantly improving

In 2019, one of the biggest concerns in the cryptocurrency industry is probably DeFi (Decentralized Finance). Many Web 3.0 projects are in the product development phase or user acquisition phase, and DeFi has become one of the main encryption applications. So far, more than 3 million ETH (valued at approximately $ 430 million) have been locked in the DeFi protocol, a large part of which comes from the P2P lending platform Compound and Maker.

Token holders are eager to use their assets to earn interest, and the number of crypto financial use cases is increasing. In this case, we expect Compound and other DeFi-related services to continue to receive attention.

In fact, in addition to lending applications, we want to see more DeFi transaction and speculative use cases, but to achieve this, the scalability solutions mentioned earlier need to be effectively deployed. Augur will be an "interesting" project. With the release of new versions in the coming months, we may be able to verify whether DApps can reach more consumer groups in 2020.

In addition, over time, the penetration rate of decentralized exchanges (DEX) like 0x and Uniswap will continue to increase (the speed may be somewhat slow, but it will grow steadily). Uniswap plans to release a new version that supports Dai trading pairs as soon as possible. 0x has just recently released a new version of the trading protocol that supports maker and taker fees. And Maker, they released the second version of Dai. Its decentralized financial protocol is becoming more and more perfect, and the iteration speed is getting faster and faster.

Increase in payments and merchant penetration

In 2019, a major milestone in crypto payment and merchant penetration was achieved, and that was the launch of the Flexa Network. To date, their partnership has expanded to more than 30,000 merchants and major retailers, such as Barnes & Noble, Bed Bath & Beyond, Nordstrom and Whole Foods. Through distribution partnerships, we expect Flexa Network to capture more end users in 2020.

On the other hand, we may see more payment solutions enter the market. Of particular concern is that Bakkt is seeking to release their payment products, which will enable merchants to securely and effectively allow consumers to pay for digital assets through mobile applications. Starbucks is Bakkt's flagship retail partner, and we hope that other major retailers can follow suit and accept cryptocurrency as a payment method to further unlock the utility of digital assets.

If merchants eventually adopt cryptocurrency as a payment mechanism, traditional payment giants such as Visa and MasterCard will likely form a lobbying team to fight back. What remains to be seen in the future. However, first of all, there is a more difficult task before us, that is, the issue of customer incentives for cryptocurrencies has not yet been resolved. After all, credit cards can provide consumers with a 3% cash back discount, and once merchants cooperate with such credit card companies that offer preferential policies, they may sign exclusive agreements, which will affect the popularity of cryptocurrencies.

At the end of 2018 and throughout 2019, we saw quite a few institutional investors entering the cryptocurrency space, including pension funds, and endowment funds from major universities such as Yale, Harvard and MIT.

Today, with the advent of institutional-grade custody services and trading solutions such as Bakkt, ErisX, and Fidelity Digital Assets, the liquidity issues of institutional capital in the past have largely been resolved. Recently, it has been reported that approximately 38% of State Street's institutional customers have at least one cryptocurrency, and since many people now have some cryptocurrency investment exposure, further market breakthroughs are needed in the future.

However, this growth may take a decade because cryptocurrencies are similar to when they first appeared in many other asset classes, such as Mortgage Backed Securities, commodities, and emerging markets. Based on past years of industry experience, once institutional investors enter the market, the corresponding assets will eventually become a separate category. But before that, the asset will still have some highly irrelevant convex transactions.

Libra and Calibra have a huge impact

In 2019, Facebook's digital currency project "Libra" (Libra) attracted the attention and regulatory review of mainstream media. If "Libra Coin" can be issued as scheduled in 2020, the impact on the entire blockchain industry may be very large.

Given the actual size of the Facebook company and the global currency role played by Libra, it will be interesting to see how regulators respond. In addition, the field of smart contracts around Libra is also very interesting: Will Facebook allow people to write whatever contracts they want? Will they limit the platform? Maybe we can find the answer later in 2020.

How to treat Bitcoin block rewards in half?

Bitcoin supply is fixed (no quantitative easing!), A fixed amount of Bitcoin is produced approximately every ten minutes, and the "block reward" is reduced by half every four years until 2140 (because the total supply of Bitcoin is 21 million, estimated according to Zeno's Paradox about 2140). When Bitcoin was first mined, the block reward available every ten minutes was 50 BTC, then 25 BTC, and now 12.5 BTC.

It is expected that around May 13, 2020, the Bitcoin block reward will be reduced by half to 6.25 BTC. From historical data, due to the market's perceived shortage of supply, the halving of block rewards often occurs at the same time as the rise in the price of Bitcoin.

We have two thoughts on this. According to Efficient Markets Theory, if we all know that the halving of Bitcoin block rewards will happen, then the price of Bitcoin is likely to not be as expected because the market has digested the information. rise.

Warren Buffett has his own interpretation of the doctrine of efficient market theory. He once said that the market is almost always efficient, but for us, the difference between "almost" and "always" is $ 80 billion.

So if all of us knew something would happen, it meant that not everyone could make money.

Here I want to tell another classic economist joke:

This story tells us that people often ignore opportunities around them. And now, this "20 dollar bill" is a halving of the Bitcoin block reward: if all other conditions are unchanged, the supply of Bitcoin will be halved, then the price should rise.

In fact, the results are also easy to imagine-most miners want to sell their block rewards as quickly as possible when prices rise, because they need money to pay for mining power, data center operating costs, and in an endless High-end chips purchased in the mining "arms race". When the block rewards mined by miners are halved, the market will definitely be affected.

In the past two halvings of Bitcoin block rewards, the price of Bitcoin will start to rise about one year before the halving.

If the situation does not change much, it is estimated that according to the price low on December 15, 2018, the block halving time is expected to be the 515th day from that day.

The chart below shows the trend of the price inflection point before the Bitcoin block is halved.

If we analyze the price fluctuations of bitcoin, we find that bitcoin has experienced 8 “booms and busts”, sometimes with large fluctuations and sometimes with small fluctuations. But if you lengthen your time, you will find that most investors who have held the currency for more than 39 months have made money. If expressed in terms of Bitcoin's exponential growth, it will be found that Bitcoin's performance is actually relatively stable, because its compound annual growth rate over the past nine years has reached 215%.

At this stage, the price of Bitcoin has fallen by about 50% compared to its peak, and has been in a downward trend for the past two years. In terms of time span, currently it is the longest time that Bitcoin has deviated from the high price since 2011. Although past performance is not representative of the future, it does show that the next bull market may push the price of Bitcoin to a higher position. 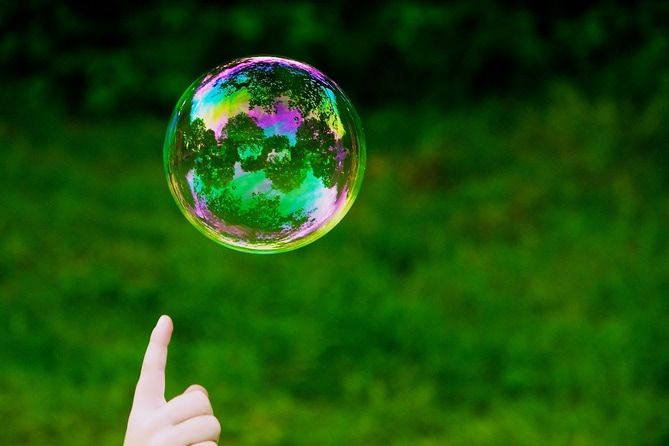 The data shows that the digital currency market continues to consolidate and the trading volume continues to decline.

Securities Times: Blockchains are gradually being applied to the financial industry. The opportunities and challenges of the Hong Kong Monetary Authority include the rapid development of technology.