Fintech mainly refers to the use of cutting-edge scientific and technological achievements (such as artificial intelligence, blockchain, big data, cloud computing, Internet of Things, etc.) to transform or innovate financial products, business models, business processes, and to promote financial development to improve quality and efficiency. Class technology. China's fintech is in a period of vigorous development, policies continue to help, and the industry is expected to usher in accelerated development.

1.2020 is expected to become the first year of global central bank digital currencies

At present, many countries have made substantial progress or expressed interest in issuing digital currency research and development by central banks. European Central Bank President Lagarde said at a press conference in December 2019 that the Central Bank's Digital Currency Special Committee has been set up to accelerate efforts to study the phenomenon of digital currencies, and is expected to reach a conclusion in mid-2020.

With the support of policies, in recent years, innovative technologies such as AI, big data, and cloud computing have been widely used in the financial industry. The cutting-edge technology investment of financial institutions has continued to increase, and China has also supported policies on the exploration of central bank digital currencies. Frequent, explored for many years.

According to Caijing, the central bank ’s statutory digital currency pilot project led by the People ’s Bank of China, including the four major state-owned commercial banks of Industry, Agriculture, China, and Construction, and China Telecom, China Telecom, and China Unicom is expected to be launched in Shenzhen, Landed in Suzhou and other places. There are differences in this pilot. The previous pilot will go out of the central bank system and enter real service scenarios such as transportation, education, and medical care, reaching C-end users and generating frequent applications.

The following table is the process of China's central bank's research and development of digital currencies organized by China Merchants Securities: 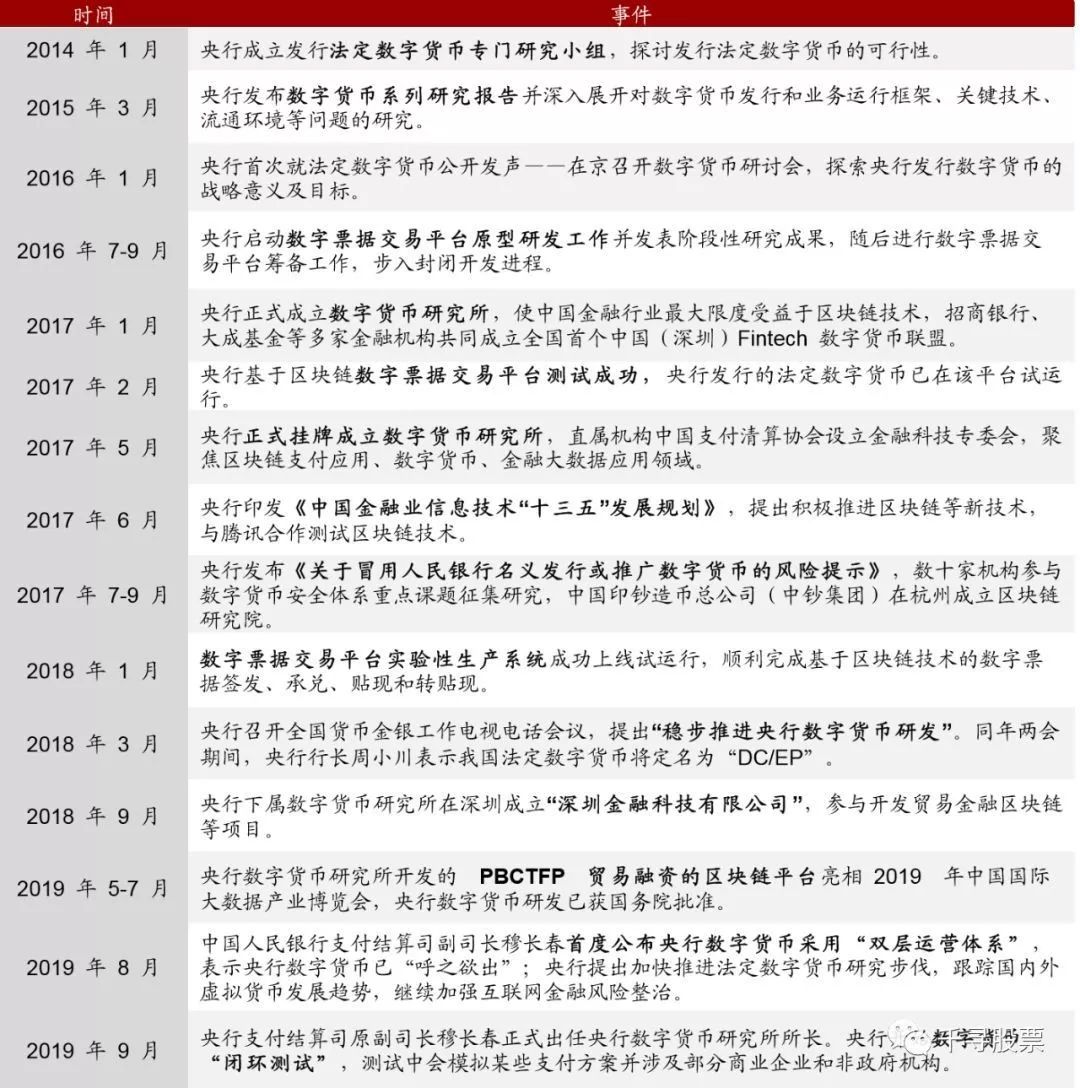 3.What are the benefits of central bank digital currencies?

(1) On the one hand, reduce the cost of printing, issuing, and storing bills and coins. The replacement of physical currency can enable the central bank to complete closed loops of currency forecasting, statistics, and management that cannot be achieved due to anonymity, improving efficiency and accuracy. At the same time, the central bank's large-value clearing system will be replaced by an automatic clearing mechanism, reducing the intermediate settlement link and directly moving from payment to clearing link, thereby reducing transaction costs and improving transaction efficiency; on the other hand, domestic cash (M0) accounts for M2 The proportion dropped from 11% in 1998 to the current 4%, and offline payments are mostly dominated by third-party institutions such as credit card banks, WeChat / Alipay. If DC / EP with high credit rating is introduced in the future, it will reshape the competitive landscape of the payment industry and strengthen the central bank and commercial banks' control over currency investment.

(2) Protect private privacy and meet the needs of anonymous payment. It is different from the “tightly coupled accounts” method in which electronic payment must be completed through traditional bank accounts. The central bank's digital currency is "loosely coupled accounts", which can be used to transfer value away from traditional bank accounts, which greatly reduces the dependence of the transaction on the account to achieve controllable anonymity. At the same time, the widespread use of CBDC and the withdrawal of banknotes will help combat tax evasion, money laundering and other illegal activities.

(3) Improve the efficiency of monitoring currency operations and enrich monetary policy instruments. The interest-bearing design of the CBDC and the gradual withdrawal of banknotes will help the macroeconomic stability. The issuance of the central bank's legal digital currency will make it possible to collect data such as currency creation, bookkeeping, and flow in real time. After the data is desensitized, it will be analyzed in depth through technical means such as big data to provide currency investment and formulate and implement monetary policy Provide useful reference to strengthen the effectiveness of the deposit reserve ratio, interest rate and other policies. Policies such as the deposit reserve ratio and interest rate affect commercial banks, enterprises, and residents to adjust their economic activity decisions by affecting the liability structure, asset structure, and financial asset prices of commercial banks, thereby promoting the effective play of monetary policy.

4. The central bank's digital currency will be an important investment theme in 2020

(1) As more and more institutions and funds enter the cryptocurrency field, we expect the market size of stablecoins to continue to expand in 2020.

(2) With the further development of infrastructure such as public chains, and the landing of various applications and financial services on the chain, in the long run, competition between various types of stable coins may begin in terms of application scenarios.

(3) Achieving security and credibility under regulatory compliance has become the primary issue that needs to be addressed in the development of stablecoins.

Mr. Newton: Treating the development of blockchain with layered thinking