Faced with the pneumonia epidemic of the new coronavirus infection, incidents such as "Red + Word will receive a lot of supplies but the hospital is still in short supply", "Hubei Red + Word Society public information is inaccurate", "Wuhan Red + Word Society security block CCTV reporter" and other events It has been exposed and fermented. As scholars, public welfare organizations, and volunteers and donors have increased doubts about organizations such as the Red + Word Society, some social credibility has been damaged.

Han Hong said in the interview: "I only knew that I had made a foundation. The original whereabouts of instant noodles can be made public. Why don't you do it and you can't make it clean? Don't blame the society for questioning.

"The whereabouts of a package of instant noodles can be made public" here, shouting the entire community's desire for openness and transparency in the field of charity. For a long time, problems such as unknown funds, black boxes and other black boxes have always existed in traditional public welfare projects. Decentralized charity platforms have always been an important exploration direction of blockchain technology.

There is no shortage of blockchain + charity platforms in the industry. In this outbreak, what is the status of the ant blockchain that first called out "Wuhan Come"? Can existing decentralized philanthropy platforms work? How decentralized are these products? Has it improved the pain points of traditional industries? Blocklike sorted out the above.

The main problems in the field of traditional charity in terms of money management and information recording are:

1. The information review of the recipients and donation projects is not strict enough, and it is difficult to make a true and effective identification.
2. It is difficult to transparently raise and use money.
3. Public welfare funds first enter the account of the central institution, and then are handled by the institution, with multi-level operations. This time the public questioning of the Red + Word Club was caused by the difference in the matching of donated materials received by its release. The contradiction is due to the above.

The previously mentioned Han Hong and her charitable foundation have been investigated as mainly belonging to the traditional charity industry. From the remarks that "a package of instant noodles can be made public" and its public information, its What we do in terms of openness and transparency deserves recognition. Although it does not use blockchain technology, there are still shortcomings of traditional industries in terms of information disclosure channels and labor costs, but this has fully reflected the public's pursuit of "openness and transparency". To a certain extent, it also lets everyone see To the society's recognition and need for a decentralized charity platform.

The characteristics of distributed bookkeeping, decentralization, and non-tampering of blockchain technology, reconstruct the trust mechanism from the technical layer to solve the issues of information disclosure and transparency of charitable organizations. In short, the focus is on whether the information is “on the chain”.

Relatively speaking, familiar third-party platforms such as Alipay and WeChat act as an institution with strong credibility.

"I'd rather trust Alipay. If Alipay isn't trusted, there is nothing credible." This is also the aspiration of donors that Blocklike has seen in multiple WeChat groups.

However, according to Blocklike, even on platforms supported by Ant Blockchain, these fundraisings are fundraising for platforms such as Hubei Province Red + Character. Here, Alipay serves as a fundraising platform, which itself cannot play a role The real role of supervision. 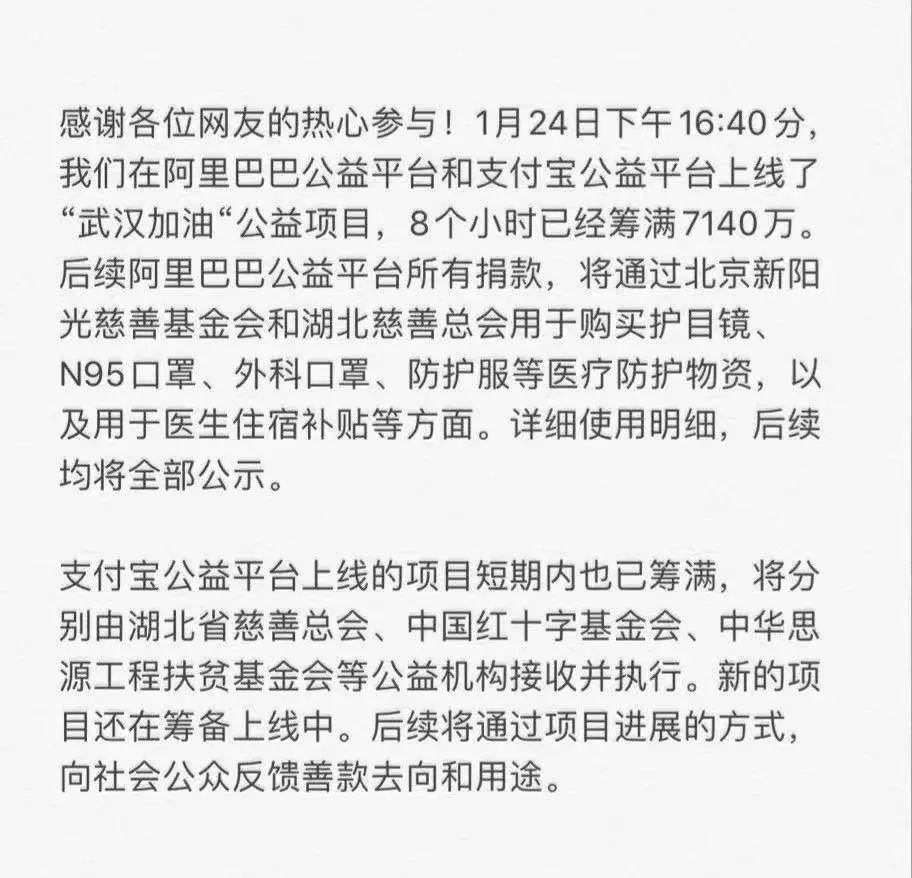 The above public information shows that the ant blockchain writes public welfare projects and donation information into the blockchain, and the first half of the information is on the chain. However, the second half of the key information related to procurement, logistics, and material distribution is missing. This part is still done by institutions that accept donations, such as the China Red Plus Foundation, in the process of "receiving and executing" The whereabouts of donated items still rely on traditional public information disclosure.

According to Blocklike observations, this is also what most philanthropy platforms with blockchain technology can do. After all, most folk philanthropic platforms do not have the right to conduct further supervision.

Strictly speaking, this method may be called a "half" decentralized philanthropy platform. The above-mentioned charity that was finally publicized in this outbreak was issued by the Ministry of Civil Affairs on January 26. The five companies mentioned in the list: Hubei Red + Character Association, Hubei Provincial Charity Federation, Hubei Youth Development Foundation, Wuhan Charity Federation, Wuhan Red + Character. Several institutions that are involved in the whirlpool of public opinion are among them.

According to the official introduction of BCF, on this platform, the donation records of each donor and the allocation records of the recipients will be displayed on the pages of various projects on the Binance Charity website and marked with the transaction ID (Txid). By clicking Txid, the public can track the flow of each transaction on BNB Chain or other blockchain browsers. Donations here will be displayed on the blockchain and will be fully credited.

In the details of the donation of this epidemic, He Yi revealed that BCF will be the main body of this donation, and stated publicly: "We will support 10 million materials first, and BCF's material donations will go directly to people. Tripartite institutions. " From the above information, we can see that Binance's approach should not be a simple way to donate only to the Red Cross. What it is trying to do is to use a decentralized method to make donations. At present, according to Zhao Changpeng's tweet on February 2, "BCF has received a letter of thanks from the Wuhan Municipal Government", the donation has been completed. According to the related donation photos circulated by the community, this decentralized method allows the supplies to be delivered to the medical institutions they help.

In the current situation, how can we make decentralized charity go one step further?

An investor from the community analyzed: "The essence of the red + word is the reconfiguration of resources. Blockchain technology can break a wider range of data islands. However, it is like the Han Hong Foundation, as long as it is a charity Yes, a pack of instant noodles can be made public, and the information is still transparent. If you don't want to disclose the information of this instant noodles, no amount of blockchain technology would be useful. "

He also mentioned, "In addition, the public interest direction is usually a currencyless blockchain with no incentive mechanism and a non-profit organization. It may lack the motivation to maintain. This requires more strength to solve the problem. When we are talking about the district In the application of blockchain in public welfare and charity, in fact, it should be more accurate to talk about the application of blockchain in government affairs. " What deserves the pride and affirmation of the entire industry is the commitment of the blockchain industry to social responsibility. As of now, according to incomplete statistics, at least 30 companies or communities in the blockchain industry have launched material support for the prevention and treatment of new coronavirus pneumonia, including digital asset trading platforms such as Eurotech, Binance, Huobi, and MXC, as well as The wikichain, TopNetwork, quantum chain and other project teams, as well as institutions such as Canaan Technology, BitWei, Hufu Group, Jinyu Capital, Eight-dimensional Capital, Zhenge Fund, and Energy Chain Technology.

According to data from the media on February 1, the total amount of materials provided by new financial companies, including blockchain companies, to aid the epidemic has exceeded 1.7 billion yuan.

We have reason to believe that the characteristics of transparency and traceability of blockchain technology will gradually penetrate into the field of charity, and the information of more charitable organizations will be further transparent.

Research | How Does Blockchain…

Epidemic Topics | How does…

Can Alipay use the blockchain…

Analysts: The level of resistance that supports the entire altcoin market cap is starting to look weak

Beijing News: There are many job seekers on the blockchain, but they do not match the needs