Author: mutual pulse chain, the original title "The public health events to promote the Chinese version of the digital economy into a higher"

The time is back to December 17, 2019. It is estimated that the "new crown virus" has appeared according to time, but this day, Wuhan is still glorious: The Smart City Joint Laboratory of the Chinese Academy of Urban Science released the "2019 City Digital Development Index Report". Based on four first-level indicators of digital environment, digital government affairs, digital life, and digital ecology, and 20 sub-indicators, the cities were comprehensively scored. Wuhan ranked third in Shenzhen, Beijing, and Guangzhou. At the time, it was said that Wuhan was a first-tier city in the digital age.

However, after the large-scale outbreak, the Hubei Red Cross still needed a letter of introduction from the units in order to receive relief supplies. This "primitive" approach exposed the shortcomings of the city's digital development.

Regardless of the decision-making errors caused by the unavailability of data in the government affairs system, specific to a life scene, individuals do not know which hospital has beds, do not know where there is danger, and where they can buy mask disinfection water. And these "don't know" can be solved digitally.

If the "2019 City Digital Development Index Report" is accurate enough, the digital ecological problems exposed in Wuhan may be more serious in other cities.

And the epidemic is over, and improving the shortcomings of digitalization will promote China's digital economy to a higher level. There is a saying that the SARS in 2003 promoted the development of digital industries such as e-commerce in China, and the new crown will also drive a new digital economic ecology. This also provides the soil for the development of the blockchain.

Digitalization has shown a huge role in this new crown epidemic.

For example, the initial digital real-name system network makes it easier to track the whereabouts of patients and contact people;

For example, in the state of residents staying at home, the digitalization of e-commerce and logistics meets daily needs and reduces the probability of infection;

For example, in the case of home office, the digitalization of office methods makes up for some economic losses;

For example, students can learn at home through cloud classrooms;

For example, tens of millions of people have digitized construction sites through monitoring equipment, and have become the "cloud supervisors" of the Fire Thunder Ershenshan Hospital;

Without these digital constructions, China's losses could be even greater.

The McKinsey Global Institute research report "How China's Digital Economy Leads New Global Trends" shows that China has firmly established itself as a global leader in consumer-oriented digital technology. China is the world's largest e-commerce market, accounting for more than 40% of global retail e-commerce transactions. In terms of autonomous vehicles, 3D printing, robotics, drones, and artificial intelligence, its venture capital ranks among the top three in the world. One-third of the world's unicorn companies (startups valued at more than $ 1 billion) are from China. At the same time, the computing efficiency of Chinese technology companies still maintains a world record. Although China's overall trade in services still has a deficit, in recent years, in terms of digital services trade, China has achieved a surplus of US $ 15 billion per year. 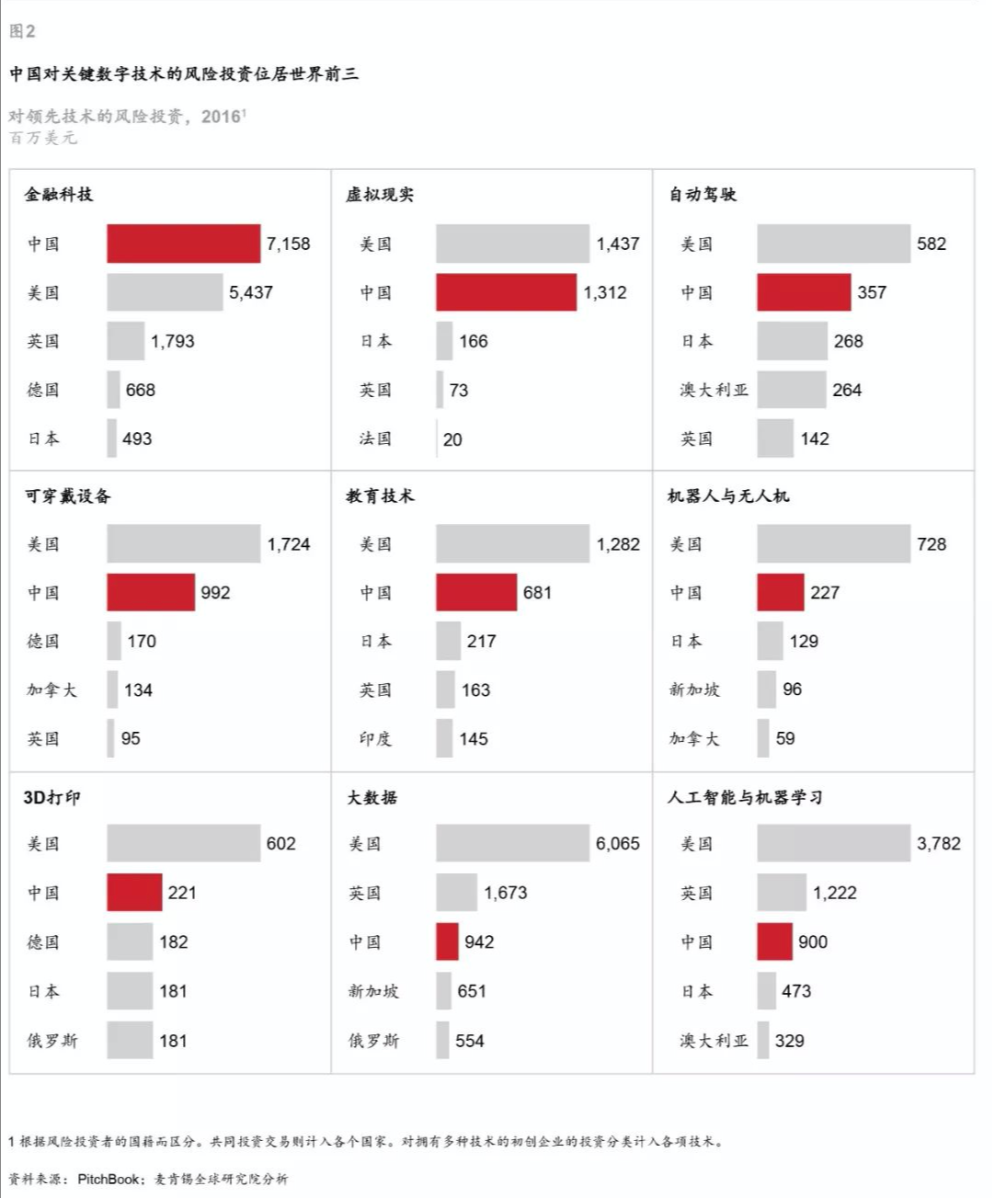 Specifically, Wuhan, the epicenter of the epidemic, is one of China's leading cities for digital construction. In addition to the "2019 City Digital Development Index Report" issued by the China Urban Scientific Research Association Smart City Joint Lab, Wuhan ranks high. Wuhan also ranks among the top cities in China in the research on China's digital economy released by Tencent and Ali.

But the development of Wuhan's digital economy is uneven. In May last year, the Tencent Research Institute released a more detailed index of the Digital China Index Report (2019), which shows that Wuhan has performed well in digital finance, digital entertainment, and digital business services. However, Wuhan is weaker in terms of digital transportation logistics, digital health care, and digital life services, which are more important to the epidemic.

After the outbreak, the government affairs of Wuhan and Hubei have received the most attention. Regarding digital government affairs, the Tencent Research Institute released the Digital China Index Report (2019), which did not go to cities alone. But Hubei's performance only ranked 14th, which is not commensurate with its 7th GDP.

There are also some "stains" in the construction of digital government affairs in Wuhan. For example, the media broke out in August last year, and the 175 million smart city project that Wuhan City Government and Microsoft cooperated with was "bad tail". In 2013, the two parties signed a contract stating that the project "builds a smart city infrastructure and platform to help the government be more insightful in optimizing allocation, emergency response and decision analysis."

At present, the people's decision-making analysis of Wuhan's emergency response is questionable.

The epidemic has exposed the shortcomings of many cities in China in terms of digital construction. If not unexpected, all parties will soon make up for it.

During the outbreak, some local governments have begun operations. For example, on January 26, a company in Shenzhen undertook the research and development of Shenzhen's "Vehicle Epidemic Prevention Verification System" to assist the Shenzhen traffic police in investigating vehicles reported by the public for suspected epidemic areas. After receiving the task, the team completed the requirements docking, full-function design, research and development, and deployment in just 48 hours. On the evening of January 29, the system went online smoothly and was put into use. This system assists Shenzhen traffic police to quickly and accurately collect report information, and realizes the closed-loop of the whole process of online tracking of report information from collection to verification and feedback; it can also effectively eliminate and filter duplicate information, comprehensively improve vehicle inspection efficiency, and effectively reduce the waste of police resources , Help Shenzhen traffic police to do a good job of epidemic prevention and control.

In Hangzhou, a listed company responded to the current epidemic situation, and the company ’s traffic signal timing team and operation and maintenance support team gave up holiday breaks to comprehensively protect traffic signals, electronic police, traffic guidance systems, traffic collection systems, and video in all areas of Hangzhou. Monitor and control the normal operation of each subsystem.

In Nanchang, a company assisted the Nanchang Traffic Management Bureau in real-time monitoring of vehicles entering and leaving the city in real time. Vehicles from other provinces, especially those from Hubei, Wuhan, and local vehicles in the province were effectively classified, analyzed, and reported in a timely manner. , Complete the daily vehicle analysis report for entering and exiting the city; at the same time, through the classified statistics and trend analysis of vehicles traveling normally in Nanchang, complete the daily Nanchang travel analysis report and report it to the Municipal Public Security Bureau.

The problems exposed in the digital construction of the epidemic are concentrated in the following aspects:

Access to departmental data. The data of each hospital, the data of the flow of people, the data of medical supplies, and the data of rescue supplies are controlled by various departments or related enterprises, which are manifested in the shortage of materials distribution and epidemic prevention in high-outbreak areas.

Construction in this area is proceeding rapidly in some areas. For example, in Nansha District, Guangzhou, the Epidemic Prevention and Control Collaboration System was officially launched on February 2. The system is based on the "Nansha City Brain" and uses blockchain and other information technology to aggregate and integrate various types of epidemic prevention information such as key personnel, latest epidemic data, and resource scheduling of the epidemic situation. Outbreak Prevention and Control Command Center. It is understood that Nansha is also the city's first administrative district to build an epidemic prevention and informatization platform.

Digital identity construction. At present, citizen digital identity data is also distributed on various platforms, including government departments and Internet companies. As a result, a large number of duplicate registrations have been made. The author has been registered with the same information by the community, neighborhood committees, local police stations, company units, and children's schools. However, the interlink pulse also found that many cities have strengthened the construction of digital identity through this epidemic. For example, on February 4th, the New Crown Pneumonia Joint Prevention and Control Platform in Suizhou City, Hubei Province was officially released. The platform includes "active declaration and epidemic clues", "information release and health education", "new pneumonia patients on the same trip inquiry", "online "Intelligent consultation", "real-time tracking of epidemic situation" and other modules provide intelligent and fast epidemic prevention and control channels for residents of Suizhou. This is the second city in Hubei Province to launch Ali's "digital epidemic prevention system" after Xiangyang City on February 1.

Smart logistics construction. In this epidemic, uneven distribution of materials was a problem of criticism. There is a lack of an intelligent "brain" that allocates needed materials where they are needed. Cause all kinds of confusion and doubt. In fact, including Ali, Jingdong, etc. have built relatively intelligent logistics systems, but the “Hubei Red Society”, which is at the forefront of material distribution, has not been adopted.

The crisis coexists with the machine. The next major public health event, the blockchain should not be absent.

Babbitt Column | What are the risks of TEE-based projects?