"Coin issuance" has always been a sensitive topic. In addition to various project parties, which other organizations or institutions will also issue their own digital currencies? Who do users think is the most secure? According to a survey, let us understand together.

Let's start with the conclusion: Central banks are most trusted, followed by payment companies

Technology companies are not trusted, but just the opposite in emerging markets

Lower income groups have less trust in all payment methods

Security is the payment feature most needed for digital currencies, but it has the lowest rating

A new survey by Ipsos MORI / OMFIF on consumer attitudes about currencies found that the central bank is the most trusted institution. In developed countries, technology companies are considered untrustworthy, and some companies may interpret them as bad news for the Libra project. In terms of payment characteristics, security is considered by far the most important characteristic worldwide. The conclusion is that digital currencies are attractive in emerging markets but less attractive in advanced economies.

OMFIF, an independent think tank of the central bank and monetary policy, commissioned MORI to survey consumers' attitudes about digital currencies and payments. The study involved 13,000 people in 13 countries in developed and developing economies.

Although consumers trust central banks more than other payment service providers, it is not an overwhelming result. Less than 40% of respondents believe that the central bank is “trustworthy”, and the net figure after deducting negative factors is only 13%; payment service providers such as Paypal and Alipay have slightly higher trust rates than commercial banks; given all these types The organization is likely to issue digital currencies in the future, so the survey is relevant. OMFIF quoted French bank governor François Villeroy de Galhau as saying in January 2020 that "money cannot be private and money is the public interest of sovereignty."

● Who should issue digital currency?

Consistent with the perspective on trust, when asked about the different types of organizations that may issue digital currencies, the central bank was among the top in terms of trust, with a 51% approval rating. Payment service providers ranked second, followed by commercial banks. For credit card companies and large tech companies, both have been negative responses.

India and Malaysia have shown a strong tendency towards central bank digital currencies (CBDC), while the US, Germany and Italy are negative overall.

In emerging markets, except for Russia, most of them prefer CBDC, and people have a positive attitude towards most digital currency issuers, including technology companies.

India is Facebook's largest market and the most trusted region for digital currencies issued by technology. If the government allows Libra digital currency, then this market alone will be interesting. 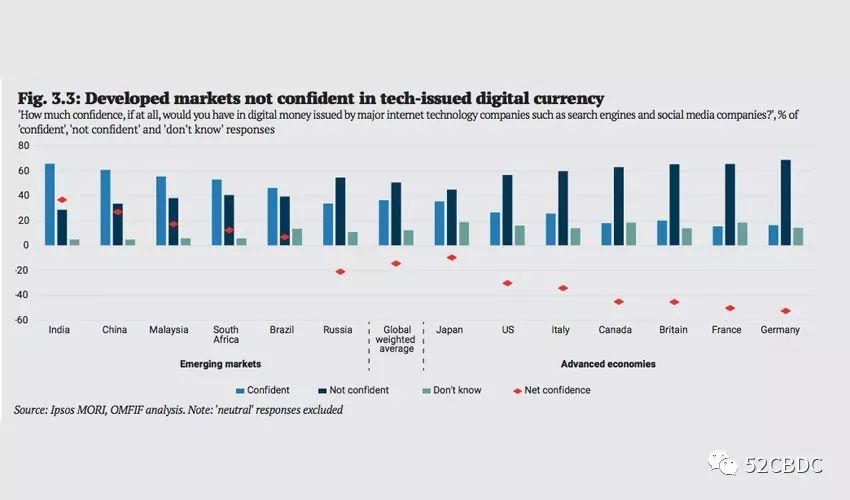 In terms of institutions, the Chinese are full of confidence in their commercial banks. Almost 60% of them trust them, and less than 20% think they do not trust them.

For all types of organizations, the survey results show that trust from households with low income and education is low. With the exception of Russia and Japan, women generally have less trust in central banks and technology companies.

In all 13 countries, the survey found that for payment methods, security against fraud and theft is considered the most desirable feature, which is also one of the lowest perceived characteristics of digital currencies. In all countries except Japan, safety is a top priority for more than 50% of citizens.

Among other payment features ranked by importance, privacy protection comes second, followed by gaps in ease of use, widespread acceptance, and speed. Generally, older respondents consider safety to be more important, while younger and better-educated people are more interested in speed.

For all demographics, less affluent respondents rated all features of cash, cards, and digital currencies lower.

In emerging markets, 57% said they would have confidence in any type of institution that issues digital currencies.

In developed economies, the lack of privacy protection is the main reason for distrust of digital currencies, especially in Germany (41%) and France (34%).

The above is what people think about currency and digital currency in this survey. Due to the limited number of samples, the survey results are for reference only.

The data in this article is quoted from ledgerinsights.

The Nigeria Stock Exchange is studying the use of innovative technologies such as blockchain to build a fundraising platform.